As part of featuring the exhibition I don’t know whether the Earth is spinning or not… Living Content presents an exclusive conversation between the exhibition’s co-curator Francesca Altamura and participating artist Dagnini. Francesca and Dagnini talk about the symbolism of gargoyles in the artist’s work, about the multiple characters that she performs and embodies, and about the ways in which she plans out her performances, fluctuating between the publics that she is engaging.

‍I don’t know whether the Earth is spinning or not… is part of the Main Projects of the VII Moscow International Biennale for Young Art, and it is curated by Lizaveta Matveeva and Francesca Altamura. 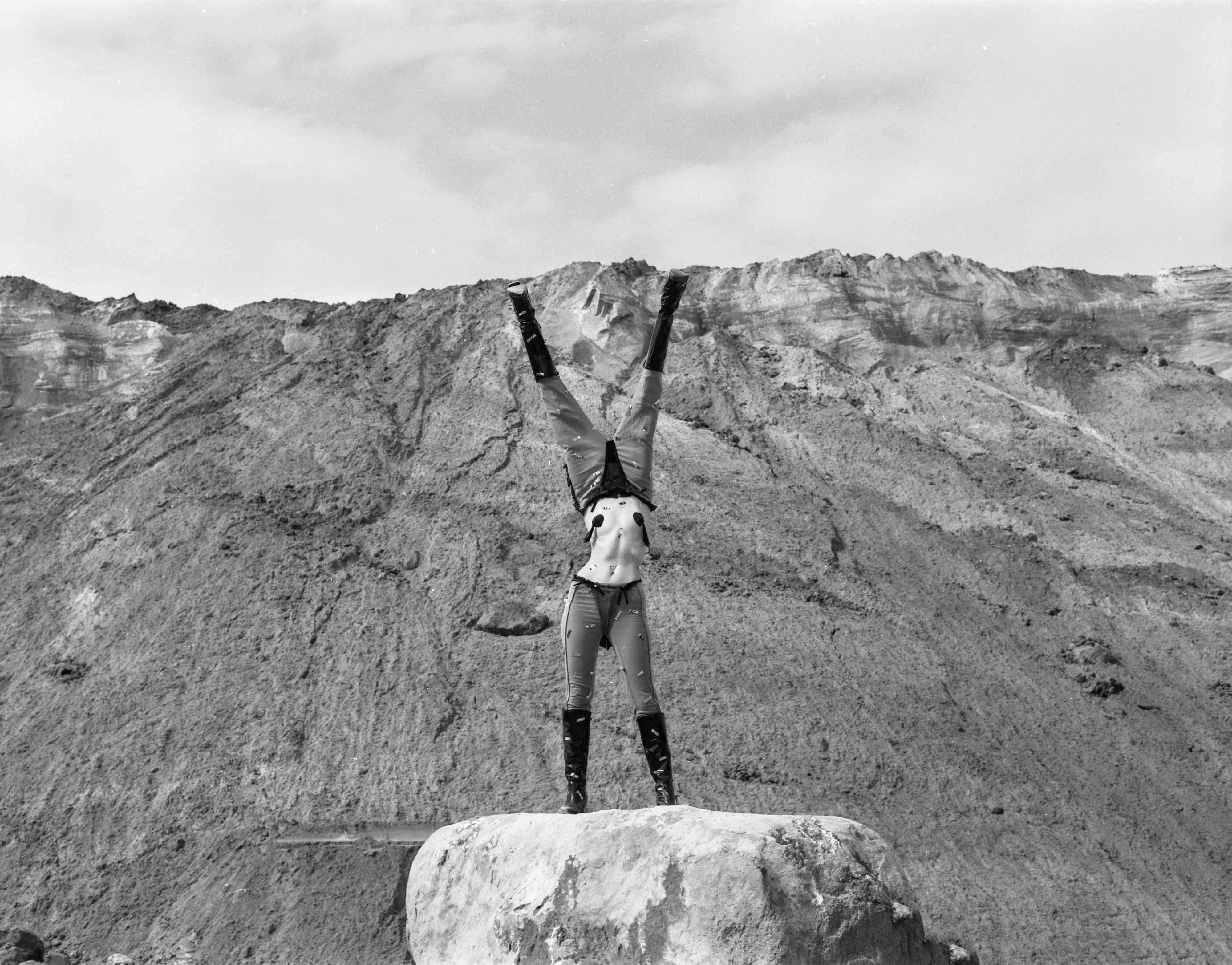 Dagnini is an artist from Saint Petersburg, born in Leningrad in 1987. She lives and works in Moscow. Graduated from Saint-Petersburg State Academy of Theatre Arts and Pro Arte School for Young Artists. Dagnini is currently represented by Fragment gallery. Dagnini works with dynamic performances, creates objects, installations, paintings, and graphics. The main theme of her research is ‘glitches’ both in digital space and in reality. The breach of peace and everyday routine are necessary conditions for her work. In 2020, Dagnini’s project “Disk (D:)” has been nominated for The State Award in Contemporary Art “Innovation” in the “New Generation” category.

Francesca Altamura: More often than not, you are the main protagonist in your performances, albeit disguised as a four-legged or no-legged creature, a gargoyle dressed in a sweatsuit and beret, or a Queen outfitted in an assless gown. Can you better describe your favorite characters to perform? Can you also provide some context in which they were created?

Dagnini: I don’t think there is a separation between me and the characters I play. We are not separated. I think of myself more as an endless number of entities. I believe there are endless numbers of creatures inside every person. I am a choir of replicants. I am an opera diva who can't sing but loves the stage, and a four-legged headless dog on heels too. Many of my forms haven't come out yet, and they might look like something you can recognize as a human or an animal form, but only because we're trapped in this comparative way of seeing.

For example, I have a character called Gorgulia (English translation: gargoyle), who wears an Adidas sweatsuit and has yellow wings. In Russia, gargoyle is used as a slang for gopniks: suburban millennials, who come from a working-class background, but who are known for sitting in this hunched-over way. A gargoyle can be an aggressive, territorial creature; it spits and runs after people, but sometimes it’s stuck in a library window, unsatisfied, but harmless and quiet. This creature is, at the same time, a mythical creature, a Russian subcultural character, and a computer game persona. Some of these creatures' characteristics are very local and the analogy might not be clear to those who haven’t grown up in Russia. It is not important for me to be super clear about these references. Every person knows and gets something out of the performative experience regardless; even if there is no reaction, that is a reaction I am totally OK with. I can’t say I have a favorite role to perform. Each character is very different depending on the context, in the same way that my casual self can be timid or loud, beautiful, ugly, glorious or lame.

FA: You often work outside of institutionalized spaces: in your previous works you performed in a forest, sandy quarry, kitchen, veranda, and even, your own bathroom. This series of works you title “Private Performances” (2018–ongoing) usually happen in a one-on-one setting, between you and the viewer. What expectations do you have for the viewer in entering into such an intimate, and likely, intensely personal exchange?

‍D: I like how these one-on-one relationships contrast with those of an artist and a random audience, where every member of the group is replaceable (which has its own magic). It is also extremely important for me to understand how these private situations cause an intense interaction between the performative act, the spectator, and the environment. When free from the institutional context, there is no such distance between these three things. This artist-environment-spectator triangle, in this case, is not a pyramid where one thing is on top, it’s more like a khorovod (English translation: circular ritual dance). There is more connection.

I like playing with people and making them feel uncomfortable. It's an important part of the process but at the same time, I am always vulnerable before them, so I like to think that it’s a fair exchange for us both.

This year has changed my relationship to performance. Clearly online performances are very different in-nature. At first, with no co-presence, it felt like something extremely crucial has been taken away. It felt like I was dissolving in an endless content flow, sort of like dying, but then I started thinking about converting the performative to the digital, and I realized that there is something to explore.

FA: Your characters come from alternative or subaltern underground scenes. What about these subcultures fascinates you?

D: When I was growing up, choosing a subculture was almost obligatory. You were supposed to be a rocker, a rapper, or a punk. Many of us never heard the music we were supposed to be fans of or embody in our daily lives. It was a game we played, a drop dead serious game.

FA: How do you go about conceptualizing and designing your performances? Do you begin with the character (hair, wardrobe, and makeup), or do you first focus on mise-en-scène, and on the mood which you hope to create? ‍

D: That depends. Sometimes it starts with a mood I want to create, other times it begins with the details. Often, things are added last minute or during the interaction. Sometimes, one creature can sit and wait for years to come out, waiting for a perfect place and situation. I first thought of Leg as a serpent eating its own tail, like the mythical symbol Uroboros. I then had to wait for almost a year for it to make its debut. You can see it as part of Summit (2020), my work for the VII Moscow International Biennale for Young Art.

I always leave space for an unprompted reaction: if and when it happens. Planning is one thing, but once you’re in the moment, the experience can be totally different. Reactions can be weird, uncomfortable, and extremely strong. It often feels like drowning, but somehow drowning happily. It feels like dreams of apocalypse that scare and excite you, at the same time.

‍FA: For the digital exhibition I don’t know whether the Earth is spinning or not…, co-curated by myself and Lizaveta Matveeva, you brought together, for the first time, a selection of your recurring characters in Summit (2020). Why did you choose a carousel for them to congregate on?

D: The carousel is a very dynamic object: it rotates again and again, yet it stays in the same spot. You have to wait until it stops to exit the ride, but what if it never stops? To me, this was a very 2020 sentiment.

I loved the name of your exhibition, which refers to Velimir Khlebnikov's poem of the same title. It gives viewers a sense of dreaminess, of existential sadness, and of affective fun that very likely ends in tears but might be worth a spin.

FA: There’s a heavy dose of kitsch and camp on board that merry go-round. How do you see your characters relating to one another? How do these characters relate to the world around them?

D: I like that I can put so many of my characters together without delegating any “roles.” In the digital sphere, I was able to have them meet and interact, or even, confront each other.

My performances are also very loud and built on rough interruption; like when a burlesque lady in a cake invades the gallery opening on roller skates. But also, I sometimes try to dissolve the environment and its context, performing as an invisible character, so that the spectator is not that sure if anything is even happening.

FA: I see you as a lone dissenter, a vanguard of the weird, who champions the absurd. I am curious to hear in your own words, how you reckon with this identity.

D: My identity is not singular. I don’t feel as a whole, I feel as the many, sometimes disconnected, unfinished and uncertain. I like to use cliches and parts of vernacular culture, but I also like to break and then remake these different parts that naturally don’t belong together. I like pieces of great poetry reflected in my work, and then performed in a cheap, domestic, and dirty costume. I always say that my principles are a deconstruction of the bodily image and a failure of one’s expectations.

FA: Madonna, Prince, Tupac, Detsl, Dagnini. How do you embody being a one-name art world celebrity?‍

D: Haha! Nice crowd. I like my name short like a monk who changes their name after initiation. I never liked too many words around myself. My surname happened to be that one thing I felt affinity with. I like the sound: it's windy. It is quite convenient because I didn’t have to change the name on my passport, I just had to encourage people around me to forget my extra name. Chosen names are like spells. They can work against you, you can give up some parts of yourself but also you can gain power. Dagnini is also the one thing that is carried on from my family and home, so I am wearing it on my sleeve, and always keep it on as my only consistent armor.
‍

Francesca Altamura is a curator and organizer living in New York (unceded Canarsie/Lenape lands). She recently curated "I don't know whether the Earth is spinning or not...", with Lizaveta Matveeva, one of the Main Projects of the VII Moscow International Biennale for Young Art. The digital exhibition is on view at notspinning.world. In 2021, they will curate a group exhibition together at Haus N, Athens, Greece. In 2019, she co-curated “Diedrick Brackens: darling divined” with Margot Norton, for the New Museum in New York; the exhibition will travel to the Blanton Museum of Art, Texas, in 2021. At the New Museum, she also curated presentations by Randa Maroufi (2020), Sydney Shen (2019), and Ahaad Alamoudi (2019), and has assisted on exhibitions by artists including Peter Saul, Daiga Grantina, Hans Haacke, Lubaina Himid, Marta Minujín, Nari Ward, Sarah Lucas, Thomas Bayrle, and John Akomfrah. She has curated exhibitions independently at The Carillon Gallery, Tarrant Community College South Campus, Fort Worth, Texas (2019), LADRÓNgalería, México City, México (2017), and The Government Art Collection, London, UK (2016). She has also contributed to the group exhibitions “The Warmth of Other Suns: Stories of Global Displacement” (Phillips Collection, Washington DC), “The Same River Twice: Contemporary Art in Athens” (Benaki Museum, Athens), “Strange Days: Memories of the Future” (The Store X, London), and the 2018 New Museum Triennial: “Songs for Sabotage.” She proudly served as Delegate for the New Museum Union—UAW Local 2110, which formed in January 2019. Altamura holds an MFA in Curating from Goldsmiths, University of London.

I Don't Know Whether the Earth is Spinning or Not...