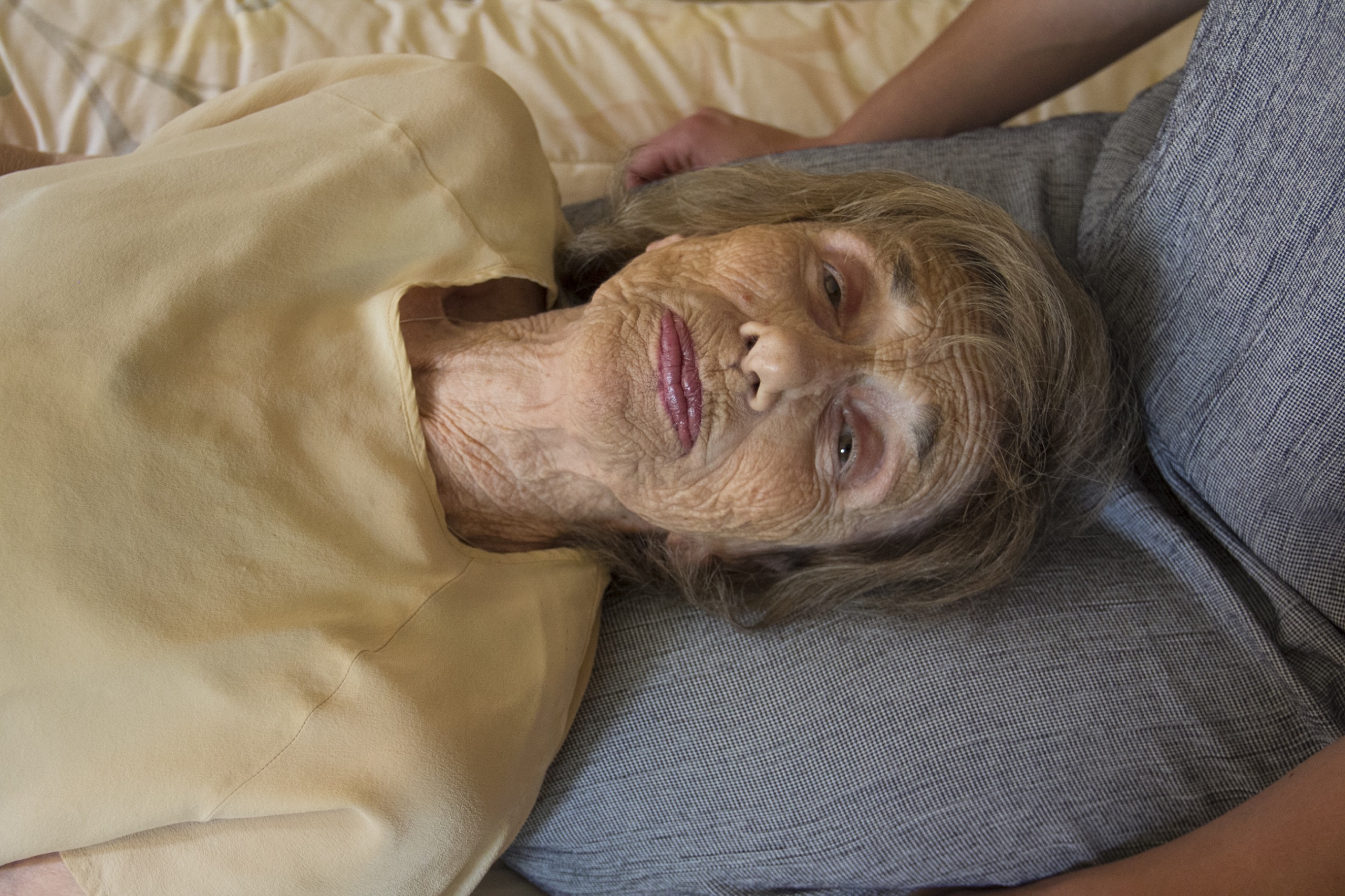 Aviva Silverman met with Adriana Blidaru of Living Content, just before opening her solo exhibition “Entering Heaven Alive”, in January of 2018, at Bodega gallery in New York. Drawing on the history of angelic representation through religion and art history, and the overarching role that angels have had throughout millennia, Aviva reveals an allegorical connection between digital surveillance and religion. This conversation focuses on her interdisciplinary approach, on her interest in Angelology, and on her previous projects and exhibitions.

Aviva Silverman b. 1986, lives and works in New York

Living Content: For your solo show “The Living Watch Over The Living,” at Veda, in Florence, you created marionettes out of glass, suspended from the ceiling. Was it your first time working with glass in this way? Were there any specific challenges you faced working on this show?

Aviva Silverman: Well, glass is tricky. The angel marionettes that I made were life-sized, which - as a beginner - was wildly more ambitious than starting with a bowl-form. The process included sending my drawings and measurements to the Italian glass studio, Collevilca, to make samples and then coming to work with the studio’s master glass-blower over two days with the great help of Veda’s director, Gianluca. I don’t normally work through someone else’s hands, but the energy used to convey the angels, the studio master’s ego, the factory of men in grey uniforms throwing orange orbs of fire on rotating sticks, and the small window of time within which you have to make decisions, especially in another language, was something I’ve never experienced in art making. There was also the element of physical weight and the stress of suspending the angels thirty feet into the air. The installer, the gallerist and I, were standing at different levels of the space trying to delicately hoist 100 pounds of glass by a wire.

LC: That sounds intense. Where did the fascination with angels come from, in the first place?

AS: I became interested in the way angels and other religious entities contain this paradox of legibility. An angel’s immaterial self, when conveyed through religious art history, becomes not only material but decorative, heroic, hyper-feminine, masculine, etc. There’s this spectrum of embodiments from ancient Judaism’s Seraphim, described as “flying elements of the sun” who have twelve wings and burst into song at sunrise to the most popular archangel Michael, depicted as a military leader. My friend Kaela Noel shared with me this great BBC podcast that traces civilizations from biblical Israel through Medieval Christianity, transformations of angelic embodiments in detail. It’s interesting to trace their aesthetic flexibility, continually changed and re-drawn to suit the ideological needs of the era.

LC: It’s really interesting to follow all these different roles that this one entity has all throughout history. In your conversation with artist Damon Zucconi, in the text that was made to accompany the show at Veda, you talk about this idea of surveillance. Can you expand a bit on the connection between your fascination with Angelology and that of surveillance?

AS: I was thinking about this in a poetic way. These two topics share some associations in the way people consider them. I guess the difference is whether you believe in angels or not; whether you believe that they’re watching over you or if you believe they’re keeping a record for their judgment. It may or may not have an impact on the way in which you live your life. Whereas, with surveillance and especially when thinking of big data, that “book” is out there in a very real way and it has a pragmatic application used to affect our lives.

LC: I see how this intersection is an overarching subject in the show, and I have to say I also enjoyed the poetics that you are exploring through individual pieces. For instance, the piece “Cable Bouquet” that is made of marine optic cable.

AS: Yeah, that piece is revealing something unseen that lives under the sea’s currents, connecting lands and carrying with it all of our data and communication and making it visible.

LC: Can you tell me a bit about the role of photography in your work?

AS: I’m shy about photography. Images are so readily available to becoming commercial or editorial - it’s something that is really slick and easy to get. I fight that. And this urge is very sculptural for me - I can interfere by rubbing the photographs on canvas so that they share a relationship to painting. There is a material history involved. In “The Living Watch Over the Living”, there is a photograph of a figure standing in a doorway next to a photograph that hangs on the wall of Sputnik, the first satellite launched into space by USSR. It started the space race that brought this new era of technological and scientific invention as well as surveillance. So there’s this figure in the image looking at you as they stand between the night-scape and Sputnik (which existed in another kind of night-scape), all framed by a mirror layer of glass. This, in a way, created a triple gaze. Perhaps because I’m a triple Aries. Every time I say that, I imagine people think I’m going to shoot fire from my eyes, but it’s an important detail! (laughing)

AS: The subjects in my work are usually people that are close to me. I love that I can archive them. It’s something that is deeply encrypted within my work. I think a lot about figuration, I am very drawn to it at this stage of my life. Maybe that’s why I was so drawn to angels.

After the show in Florence, I took a road trip and stopped at many churches throughout Rome and Tuscany. Everything is so laden with figuration. There are so many frescos piled on top of one another; they become this cosmos of people staring back at you. You’re never alone. There is something serene with the space that was created for prayer but there is also the haunting feeling of being watched. At the same time with my opening, I had a crazy thing happen! It was Yom Kippur, the holiest day of the year for Jews, and I was upset because I couldn’t participate; it’s something I love to do with my father. Halfway through my opening night in Florence, this Israeli guy came up to me and said: there is this synagogue down the street, do you want to come with me?

AS: Yeah! So it became this really ragtag crew of Italians, my friends, the man and his girlfriend, all going to this heavily guarded orthodox synagogue called “The Great Synagouge of Florence”. It’s one of the largest in South-central Europe, built in the age of Emancipation as a symbol of freedom. To enter, we had to be patted down and give up all our possessions. Because it’s an orthodox synagogue, all the women go to one end, so all the men can enter the body of the temple. The women’s area formed its own ceremony of friendship and gossip, parallel to the strictness of prayer and ceremony of the men’s. There was freedom in not being watched. The synagogue itself was designed in Moorish revival style by architects who wanted it to remind Jews of the origins of the Sephardic Jewry in Spain. Every square inch of the wall space was covered by golden geometric shapes and lines, which led to ornate molding.

IAfelt that I returned to something so familiar, something I recognized (albeit, not as glamorous as the synagogues of my childhood), to a space that lacks any kind of figuration, and finding respite in abstraction.

LC: It’s interesting to hear how you take religion as inspiration. Is this connected to your past and belief?

AS: When I think about my work, it’s always pulling from all aspects of myself, and past myself through my ancestry. Everything is always with me. But I also think Florence has definitely influenced this religious content too.

LC: So, is this an investigation that you will be carrying on in your next show in January 2018, at Bodega?

AS: The show at Bodega is so close to the one in Italy, that the work can only be an extension of that. I’ve been really interested in pursuing working with neon and glass more. I met with a neon light artist named Wayne Strattman, in Boston, last weekend. He makes sculptures that are filled with plasma, xenon, and other kinds of gases that are engineered to react to touch. I’m loving this integration of other senses. I studied Interactive Design in college which included electronics and robotics. We worked with microprocessors capable of creating causal relationships; you could engineer a circuit board to turn on Hot 97 from the radio when the temperature in the room reached 97 degrees, etc.

LC: Who was an artist, or someone that you worked with previously, that inspired you?

AS: Madeline Gins, the poet, and radical architect, was the only one. I remember once Madeline said she wanted my dog plays to go straight to Broadway. She was like “Enough of these galleries, we will have to call up some producers!"

LC: Are you going to continue your past series, like the soups or the dog plays, in parallel with what you are working on now?

AS: I don’t know. I don’t like that an artist’s professional life sometimes feels compelled by the invitation of another or through another person’s interest. You know, like “come do this thing with me”. I don’t know what that means for all of these works right now, but I am making a cookbook of all the soups.

LC: What’s the name of the book? When is it coming out and where can we get one?

LC: Love the title! And what is something that you’re currently reading or watching that you’d like to share?

AS: I’m about to go see the Jane Goodall documentary at Sunshine Cinema. I can report back if that’s good. I’m also reading “The Sea Can Wash Away All Evils: Modern Marine Pollution and the Ancient Cathartic Ocean” by Kimberley Patton, who teaches at Religion at the Harvard Divinity School. It’s about both the ways in which the sea has been used through millennia for cleansing and symbolic purposes and the crisis of pollution that is hinged on the premise of the ocean’s boundlessness and infinitude.