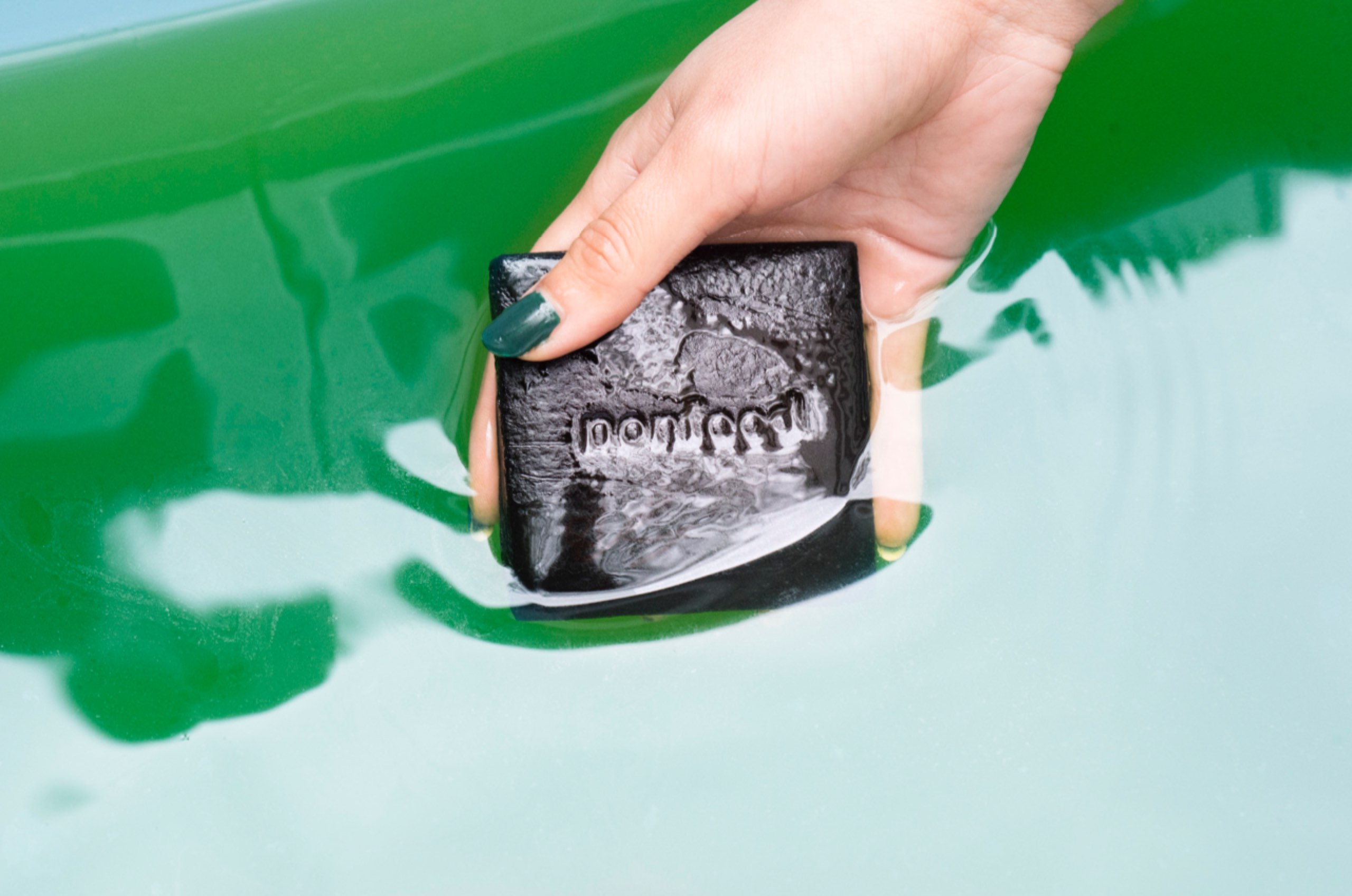 Equipped with an ecological outlook, an avant-garde approach, and a slick branding campaign, Nonfood is a company that challenges the way we think about food: from taste to codified cultural norms. Conceptualized by artist Sean Raspet, writer/artist Lucy Chinen, and joined by curator/brand consultant Dennis Oliver Schroer and scientist Mariliis Holm, Nonfood uses farmed algae to create food products that redefine both the aesthetic experience of food, as well as its practical aspect. Lucy and Sean discuss how the art world embraced this project so far, about the untapped potential of using molecular engineering to create brand new flavors, and about the future of algae at large in relation to a sustainable outlook.

Nonfood started as a way to change the culture that contributes immense waste in our current ecological climate, and to cultivate a conversation around the aesthetic experience of food. Nonfood makes new food products from algae, believing that food isn’t just about calories – food can be delicious, nutritious, sustainable and interesting.

Living Content How did Nonfood come about? What do your individual skills bring to this project?

Lucy Chinen Nonfood came about from Sean’s art practice and my research/ writing practice as it moved toward evaluating consumable substances as you would review an artwork. I have a Media Studies background as well as art production. The topic of food and food culture became interesting to me when considering the infrastructure versus the belief system of different camps of food culture.

At that point, there were new food products and businesses popping up in the mainstream press, like all those meal prep deliveries and various other pro-convenience services, which - like technology - created opacity in where your food was coming from. And this is ironic because the whole culture around “organic” or “local” is where your food is coming from, but even there it is also abstract, it’s a “vibe”, not actual transparency.

Additionally, I saw that the aesthetic experience of food has been limited to some small tapas-sized tasting portions with squiggles on a white plate or a theatrical molecular gastronomy experience. At that point, it is also just a replacement of form for one flavor than what would be expected (i.e. sweet potato in pop-rock form). But even those experiences are not accessible to everyone. While the experience of kraft mac and cheese is experienced by many.

LC: How would you say that Nonfood fits in a world in which the artisanal is more cherished than the standardized? Can you tell me more about your ideal customer and why are you branding Nonfood via the art world?

Lucy: The aesthetic of the product at this point is in line with the idea of the prototype. The packaging will ultimately change. Our ideal customer is someone who wants to try new things. In various ways, the art world is something we all (Sean, me, Dennis) have relationships to, so we are starting there. I guess whenever something is not definitive category wise, it can fit somewhere in the art world. The bar isn’t exactly a meal bar, or a snack, so we called it a salad for your pocket, a rectangle juice.

LC: So, do you present your products as cultural objects that come with an aura of “limited edition”, or as a product that wants to gain viral value?

Lucy: For us, limited edition is a small batch factory run––it’s more of a practical solution than anything else. This allows us to try out the newest ingredients and get them to people quickly. Otherwise, we would have to wait until we were ready to produce a quantity of tens of thousands of units, after testing out various formulations. That would take forever, and by then we wouldn’t be at the forefront of algae food products and it would also not be as interesting for us to produce or promote.

LC: Algae is considered as the food of the future (and we’ll surely get to expand on this in a bit), but is it currently economically viable to farm algae? Where do you farm your algae and how much algae do you need, to create 1 Nonbar?

Sean: The Nonbar is currently 42% algae by weight, though we are working on formula changes to bring it up to 56% for the next production run (other products we are working on are close to 90% and our goal is to use as much algae as possible). So for a 70 gram bar which is the size of the first prototype version, there are about 29.5 grams of algae (and aquatic plant) materials.

We get our algae from suppliers that specialize in growing it. We have three different varieties that go into the Nonbar and each comes from a different supplier. Right now it is a new and relatively small, but growing, industry. It’s economically viable, but it will probably become more so in the future as the technology improves and consumer demand increases.

LC: You are focusing on the idea that the future of flavors should be non-mimetic (not mimicking the flavors that we already know well: vanilla, chocolate, strawberry etc). Can you tell me a little bit more about this concept and its implications: what does it mean for someone to be exposed to a completely new and alien taste which is created in a laboratory? How do people understand and respond to that?

Sean: One thing to mention is that mimetic flavors: vanilla, strawberry, blueberry, etc. are made in the lab to the same extent as non-mimetic flavors (or more accurately, the initial prototype formula may be designed in a flavor lab and then scaled up and actually manufactured in a factory).

For artificial flavors, there is a large but limited set of specific flavor molecules that can be used––a kind of color palette of flavor molecules. (The same is true for “natural flavors” which are actually no different than artificial flavors––they are also made from the same set of flavor chemicals.) Most of the flavor industry takes these molecules and combines them together into formulations to create an “illusion” or sensation of something pre-existing and familiar. Whether or not it is convincing is a separate matter. Most of us rarely if ever taste a vanilla bean for example, we’re more familiar with the flavor as it has been conveyed to us through a lifetime of vanilla products (though actual vanilla is in fact quite bitter).

The basic concept that I’m interested in is that since all flavors are made from combinations of molecules (again, regardless of whether they’re “natural” or “artificial”), let’s think of the molecules as the basic building blocks and create flavors based on that–– based on the underlying molecular structures. Rather than being limited to creating a copy of a copy of some idea of nature, a flavor can be constructed based on its own specific qualities, and this opens up a wide range of new possibilities within the flavor space.

LC: When focusing on creating these new tastes by manipulating molecules, regarding one of his earlier projects, Sean says: “A molecule is a molecule, it is the same matter even though it is artificial or not”. This brings about an applied rejection of the classic duality between natural and artificial - together with the preconception that one is good and the other is not. What are your thoughts on overcoming this natural vs artificial delimitation, and how can this application help us further in the way we envision the future at large?

Sean: That’s a great question, and the short answer is that I think it will take time––more than anything else––for people to gradually move past the dualities of “natural” and “artificial”. But we hope that using food and flavor chemistry as an area to open of the possibilities of what happens when we leave these outdated concepts behind will help.

We often mention it, but it’s important to emphasize again here that the most “sustainable” and “ecologically friendly” potential solutions to our current and future environmental crises are not the products on the shelf labeled “natural.”

LC: There are, of course, many ways in which algae could be used, some of which are still to be considered. (I’m thinking here specifically about biofuel). Do you have a plan regarding Nonfood’s future? Could the project be connected with a sustainable structure that expands beyond alimentation?

Sean: That’s interesting that you mention biofuel. Actually many of the suppliers of algae as a food source today started producing it to make biofuels, but when crude oil became very cheap some years ago (partially due to fracking technology) their more sustainable products were too expensive. So a lot of them pivoted to using algae to make food ingredients (which is not as different from producing biofuel as you might imagine, though the molecular structure of the oil is different for human consumption––similar to olive oil or in some cases omega-3, which is used more in the supplement space). Many people don’t know this but the food system actually accounts for more CO2/greenhouse gas emissions than all transportation combined, so algae could potentially have a larger environmental impact in that industry (though biofuels will probably become a larger part of the picture again in the years to come).

There’s an interesting company called Eugleena out of Japan that does all of the above actually. They already produce algae-based bulk food ingredients and are working on algae-based aviation fuel as well as road construction materials.

Our area of expertise is in the food space and we see that as the most important problem to solve at the moment. But the possible applications are immense for algae to create highly sustainable products and systems in many areas of the economy.

LC: And continuing with this idea regarding sustainability: in a practical way, algae food can become one of the foods that would be able to form an understructure of nutriment fortification in the Global South. Do you think that it can ever arrive to that point?

Sean: We actually think algae will eventually be the primary food staple throughout the world. It’s a question of diminishing resources and an increasing population.

I think algae has great potential for the “Global South” and all areas of the globe but we are focusing on the US presently. First of all, because that’s where we’re based and importing/exporting food is not easy. But also, since the US has the highest resource consumption per capita of anywhere in the world, getting consumers to switch to algae-based food here will have the largest global impact. After the US we are considering the EU and China among other markets.

LC: What is the feedback you received so far? What are your upcoming projects? How’s 2018 looking for Nonfood?

Lucy: We just sent out our feedback survey and we’re watching the results come in this week. The Nonbar formula is not fixed, it will always be changing. We will be improving on the Nonbar prototype and also release another small run of a different form soon. 2018 for Nonfood the goal is increased distribution.