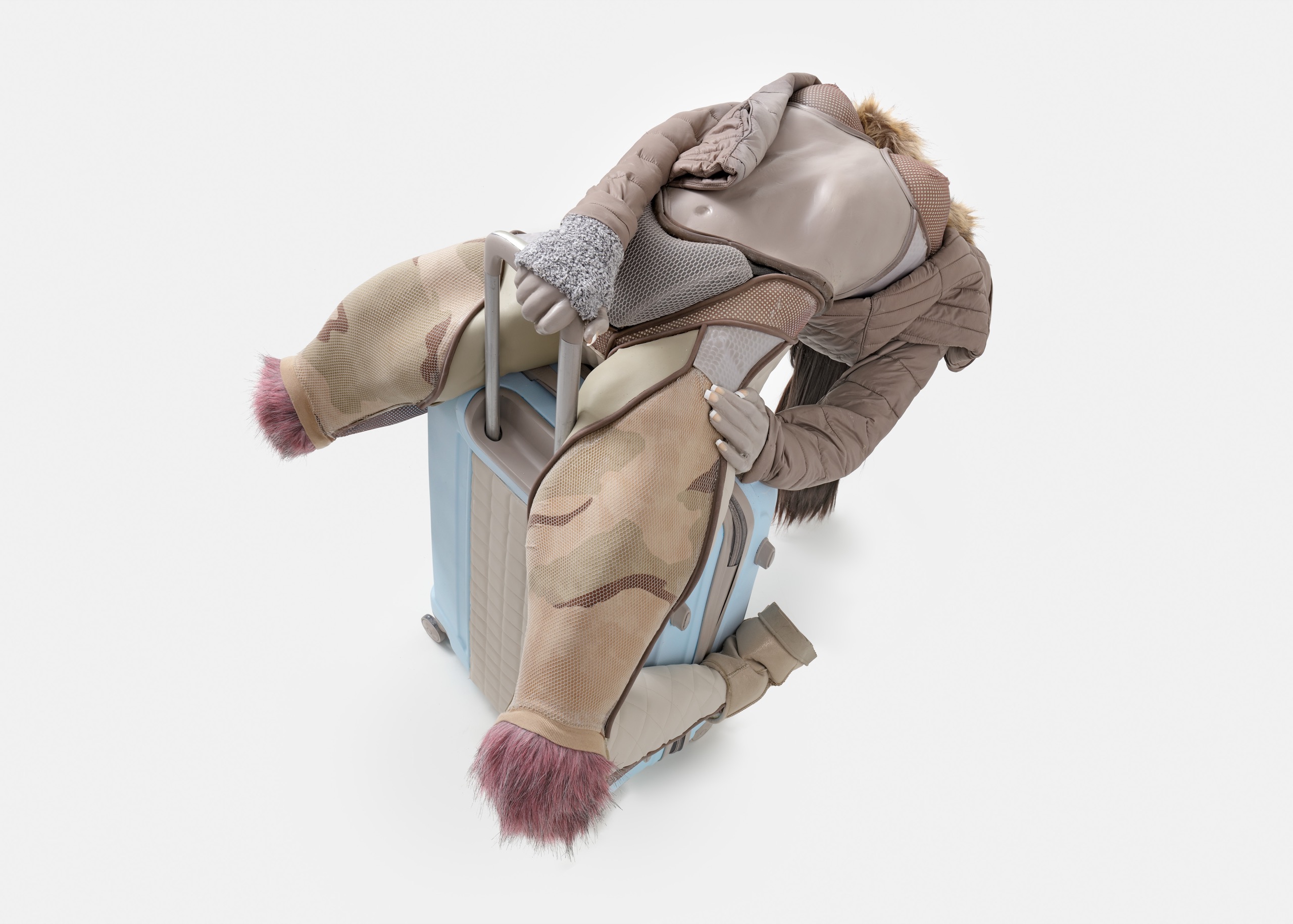 Anna Uddenberg’s work explores and highlights systemized relations of power and contextualized conventions of control. For this issue of Living Content, Anna talks to Adriana Blidaru about how sexuality, materiality, and norms, play out in some of her most recent projects. She offers an insightful overview into the ways in which her practice incorporates figuration, abstraction, and performance, revealing the connecting links that make for a smooth transition between these genres.

Anna Uddenberg was born 1982 in Stockholm, Sweden, and lives and works in Berlin.

Living Content: Anna, you grew up in Årsta, in Sweden. How was it was growing up there?

Anna Uddenberg: Årsta used to be what one might consider a working-class suburb, right outside of Stockholm in Sweden, now I guess that has changed. There were mostly old people in the neighborhood where I grew up. My mom used to say that there will soon be a generational shift and families with kids would start moving there, but that never happened. Remember the other day, when I took you to my old street in VR Google Earth? One could still spot some grannies at the bus stop over there...

LC: (laughing) True... And I remember you saying that before getting into art school you wanted to study fashion design instead?

AU: Yes, art wasn’t really on my map as a profession for the future. When I was around 17, I started using my parents’ basement as a studio for making clothes that I later sold at this shop called Weekend. Now, I think it’s called The Weekday and they are pretty big as a company. But at the time they were this small boutique that would accept hand-made designs. I think that was when I got into this flow of working day and night on this. I applied to an art school and I started taking fashion classes during the evening to apply further for a Degree in Fashion, but I realized that the feedback that I was getting from the fashion teachers was very poor and not very interesting at all. Whilst in my art classes, I was getting really insightful feedback that was much more interesting. I gradually realized that this was actually what I wanted to do. One of my teachers at the art school really encouraged me to apply to art schools instead of fashion. I applied for Fashion Degrees at Saint Martin’s in the UK, and another big fashion school in Sweden, and I didn’t get in. But I also applied to art schools and I got into almost all the Universities that I applied for. It was really like following the signs and noticing what doors were opening up for me. I’m glad it worked out like this.

LC: Surely! So do you see this beginning in fashion as somehow still influencing your current artistic practice?

AU: I’m really happy that I can work the way I do right now. I’m obviously able to apply materials more freely than a fashion designer does. At the end of the day, in fashion, you have to make a garment that you are able to wear in one way or another.

LC: Perhaps not a lot of people realize, but you make all of your sculptures yourself. Can you tell me a bit more about this process?

AU: It ends up being a very laborious and classic process of sculpture making: you weld a metal skeleton, then you build with clay on top of that, and then you can basically sculpt and make a mold out of it. Then we turn the mold into fiberglass aqua resin casts so it becomes a hollow structure that is very resilient. All this is pretty complex technically but what you’re actually confronted with, as a viewer, is just the surface of this entire structure. And in the process of making it, this is an interesting and charged moment for me: when I consider how I want that surface to come across. For example, I will use vinyl laminate flooring instead of real wood, and other imitations of classical materials such as stone, steel, and wood, because they’re so... post-real, or better said: post the real deal. I’m into these materials that are supposed to show quality but they are just the flimsy filters of the real deal. It’s an aesthetic that wants to perform qualities like functionality, genuineness, safety, activity, or let’s say intimacy. Together they become like a pallet of triggers of all these things.

LC: While you were still living in Stockholm, you were part of a collaborative project that involved making furniture. Can you tell me a bit more about this project?

AU: Back in 2013, Madeleine Norling and I did a collaboration called NU - Norling Uddenberg. We made one furniture collection together, utilizing all shades of nude colored laminate Marmoleum, and aluminum pipes as our main source of material. It was basically me and a friend pretending to be furniture designers. In Sweden furniture design, and design, in general, is regarded much more seriously than art. The sober nordic design is really dictating good taste in Sweden. It was fun to take on the role of a furniture designer in that context. We were also very influenced by the Swedish reality TV-show ‘The Angry Carpenter’. Every episode begins with the angry carpenter inspecting a house. He starts ripping off tiles and loose laminates to point out how shitty everything is put together, only to rebuild it into an updated, but in fact, equally shitty version. For me, this project was really about elaborating and having fun with taste and class. Taste and class come in the shape of mass-produced home interiors from hardware stores like Home Depot or Bauhaus, and they get presented at a prominent design association such as Svensk Form (the Swedish Society of Crafts and Design).

LC: Is this how you arrived at creating these abstract, furniture-like pieces, that you showed at kraupa-tuskany zeidler?

AU: When I made these sculptures for the show Sante par Aqua, I was thinking a lot in terms of a script. These sculptures are actually opening up and reconnecting to a project that started off about ten years ago when I was still working with performances.

I used to come up with ideas about performance pieces based on specific events that were taking place. For instance, I was looking into the way PR-events are aiming to make people feel exclusive and special, and how service can be used to direct and even manipulate people. I was interested in the way people are performing their “better selves” under these kinds of social settings, and I used this as a script for my work. I did some pretty pervy pieces dealing with service and power during that time. In one instance, two girls and I took on the role of hostesses refilling everyone’s glasses at a fancy Christmas dinner that a group of galleries in Stockholm arranged for their collectors. Since it’s an unwritten rule to always invite the hostess for a glass, we kindly asked the guests to serve us back by pouring some champagne in our mouth while we kneeling down in front of them - and so everyone did. It was really emphasizing a play on power, that so many service positions already involve.

I feel that the figurative sculptures that I´'ve been making in the past three years, came out of a similar process of being socially coded. With these recent furnituresque pieces that I made this year, I imagined them as objects that carry within them some sort of embedded script, for a potential body or a potential performance to take place. So, in a way, I do feel that this transition from figurative to non-figurative was very smooth. Using the script was a sort of conveyor for these new forms.

LC: I can see that your work is very subversive, and in your latest works this subversiveness becomes more subtle through abstraction. Would you say that you’re heading more towards non-figuration now?

LC: Are they part of a film?

LC: I never looked at them that way but it totally makes sense now.

AU: Yeah! But of course, I wanted the sculptures to have independence from this imaginary scenario. So you wouldn’t necessarily need these figures to activate the sculptures but it’s easy to imagine how the sculpture could accommodate a body.

LC: The sculptures have a very physical presence. Do you also have a plan that you are following when you are making the work?

AU: Not really, I begin knowing that I have a few elements that I want to use. If you look carefully, you’ll see all these recognizable elements. For instance, a head support from a massage chair can become a face-sitting device that also has a little staircase on the side that leads up to it. For Sante par Aqua I knew that I wanted something comfortable, compact, and more importantly, something about control. I’ve been looking into all these kinds of bolstered interiors for cars or yachts. The business class interiors are organized in a very specific way: you want to make the body comfortable, but it is also a very limited amount of space. Everything is optimized: every little corner has its purpose. That is something that I was thinking about when making these objects. I start from an idea, from materials or from a feeling, and I elaborate it further as I make the object, but I never make a sketch. My assistant keeps asking me to make sketches because it would be so much better for our workflow. First of all, I’m not so good at drawing, it complicates things, and secondly, it’s often about trying things out: I wouldn’t know myself how a piece is going to look until I tried a few things out. But I do try all the pieces myself: I try and see how they accommodate my body. Luckily, I don’t have to make any functional objects, that’s why everything could potentially work for a virtual body…

LC: True, I’m looking forward to seeing how you’ll bring this virtual body into the mix! And are you working on any upcoming projects right now that you’re particularly excited about?

AU: Right now I’m trying to make a website. I’m thinking about all these website templates that you have circulating. Everything seems to be fulfilling a commercial agenda in one way or another. So I’m working on my website to make it feel a little bit... dangerous almost.

You know, when you try to stream a movie and then all these other windows pop up, and you feel that everything you click on could potentially be a virus? That’s how I want it to feel: ugly, mean aesthetics. I’m looking at how PirateBay’s website looks like for instance.

LC: I really love your current website actually! Highly recommend that people should check it out before you change it. And, a final question: do you want to share something that inspires your work at large?

AU: Yeah... I mean it could be so many things... but Girlfriends Forever is something that I think could work here. It came out in 2012 or 2013, and I saw it for the first time maybe two years ago. It has this kind of ecstasy vibe to it and all the interiors are really extravagant -- it wants to look like a glamorous setting but it’s something extremely cheap about it. That’s what I think it’s fascinating about it.