Bonnie Lucas has been living in New York since the 1980s. After a solo exhibition at JTT Gallery in New York, in January of 2017, I reached out to her to find out more about her practice. She invited me to her home, in Little Italy, which also serves her as her studio. The walls of her kitchen are covered floor to ceiling with small gypsum collages, canvases, and assemblages that she has been making for over thirty-five years now. Lucas collects hundreds of mass-produced objects that she often buys from discount stores around her home. These include dolls, ribbons, stuffed animals, and tens of other prosaic household objects, that she breaks and alters for her assemblages. We talked about her childhood growing up in New Jersey, in a straight-edge American nuclear family, how this has been an influence in her practice, and about the pleasure of breaking things and sewing them back together. She made a clear point in our conversation that her underlying interest in the topic of feminism and femininity does not necessarily come from a theoretical strand of discursivity but, rather, from her personal experience and her fascination with these gendered objects that are made for our daily use. 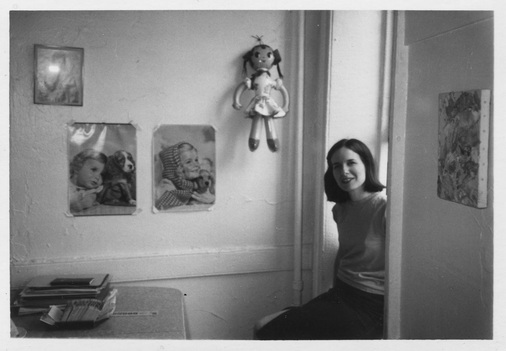 Bonnie Lucas (b. 1950, Syracuse) is an artist based in New York, NY. In 2014 her work was the subject of a survey exhibition at Sylvia Wald and Po Kim Gallery, an artist-run space in New York. Her work has been exhibited throughout the United States (New York, Cambridge, Boston, Baltimore, Chicago, Cleveland, Minneapolis, Oakland) and abroad (Netherlands, Finland, Japan, Taiwan, South Korea, Thailand, Malaysia, Singapore, Indonesia). Her work has been featured in a number of publications including ARTnews, The New York Times, The Village Voice, The New Yorker, Arts Magazine, and The East Village Eye.

Living Content: You have been a practicing artist in New York for the past forty years and your work has been very consistent in highlighting specific misconceptions generated around topics of femininity, motherhood and childhood. How did your practice follow the evolution of these topics throughout our times?

Bonnie Lucas: I love to present and undermine our culture’s ideas about femininity, children, sexuality and cultural expectations, and of what it is to lead a good life as a woman, but I would not say that my narrative has been evolving. I was deeply affected by growing up a girl in America in the 1950s and 1960s, so I feel that my concerns with this have been in place since the 1980’s. They say that many artists are telling the same story over and over but in different ways. I think that is me.

LC: In what way were you affected by growing up as a girl in a traditional American household?

BL: I grew up in Syracuse, in New York, in a time when girls were very circumscribed. They used to say: "sugar and spice and everything nice and that is what little girls are made of.” I had a pink bedroom filled with pretty dolls and lace curtains. I loved this stuff, but I also knew that as a girl and young woman, I was not particularly sugary or nice. In fact, just being sexual and growing up in that environment made me feel completely alien to what a girl was. And, my mom never once talked about things like menstruation or sex. So I was baffled and ashamed but went ahead anyway, being the real girl that I was, and I turned it all into art. I guess the strange shame and pain that I felt were transformed into images that are beautiful, strange, not nice, complicated, and funny. I think that is what life, in general, is like. You see, one is always told what one should be, and do, and feel, but that is only one part of the story. I kind of knew when I was young that I had a story to tell and I wanted to tell it. I embraced the Feminist Movement in the late 1960s and felt vindicated and powerful.

LC: Is there a cyclical process in your practice - or a certain series that you keep returning to? Can you tell me more about the way you work?

BL: I usually work on a project from two to three years. Then, if I feel that my ideas for the cycle are not as fresh as they were at the beginning, or if I feel a sense of tiredness, I’m itchy to try out new materials and new formats. So, oftentimes I finish up a cycle at the same time I begin a new one. I might go out and buy new things when I am finishing up. I just did that this Spring: I finished up my plaster plaque series and shopped for a child’s dress for my new fabric and sewing series. It was hard for me to say goodbye to my plaster but I know I will return to it. The cycles of my work have to do with what came before.

LC:  Your practice has been in and out of the spotlight since the 1980s and, in January of 2017, you had a solo show at gallery JCC in New York. How did that come about and what was the result of this exhibition?

BL: Marie, who works at JCC, saw a reproduction of a piece in an old issue of Artforum. She was having dinner in a Vietnamese restaurant when she found the magazine on a counter. She loved the image, and thought “I know of Mike Kelley’s work, but I don’t know the work of Bonnie Lucas”. Then she found me online. We have been working together for almost two years since. This is one of the biggest differences from the 1980s and now: the internet. You can find anyone and images get out incredibly fast and can be seen by thousands of people. Hard to believe that not that long ago everything was done on paper and through the mail.

I also feel that at the moment there is a focus on groups of people that were left out of the money-centered art world, and I hope this moment has a lasting influence. And because of my show at JTT, I have met other, younger artists with whom it was great to interact and invite them over to my studio. Showing makes an artist visible and then it is easier to connect.

LC Who are your influences? What continues to inspire you?

BL: I discovered the artists Lucas Samaras, Joan Snyder, Pat Adams in the late 1970s, in the early 1980s I was inspired by Florine Stettheimer and Frieda Kahlo. I still love their works but now I am inspired by finding inexpensive objects in discount stores and craft shops like JoAnne Fabrics. I feel that I am on a treasure hunt when I shop at those places. I take this stuff home and play them to get ideas. I just spent hours buying ribbons on sale and found some with Disney princesses on the ribbon. I will be using this ribbon soon.

LC: What is your attitude towards femininity?

BL: I treasure some of my “feminine” characteristics. In the 1980’s I was called “The Feminine Feminist” in a time when feminism was seen as unfeminine. I was actually flattered by that. But I hope that gender labels will slowly disappear, even if right now they are still very much with us.