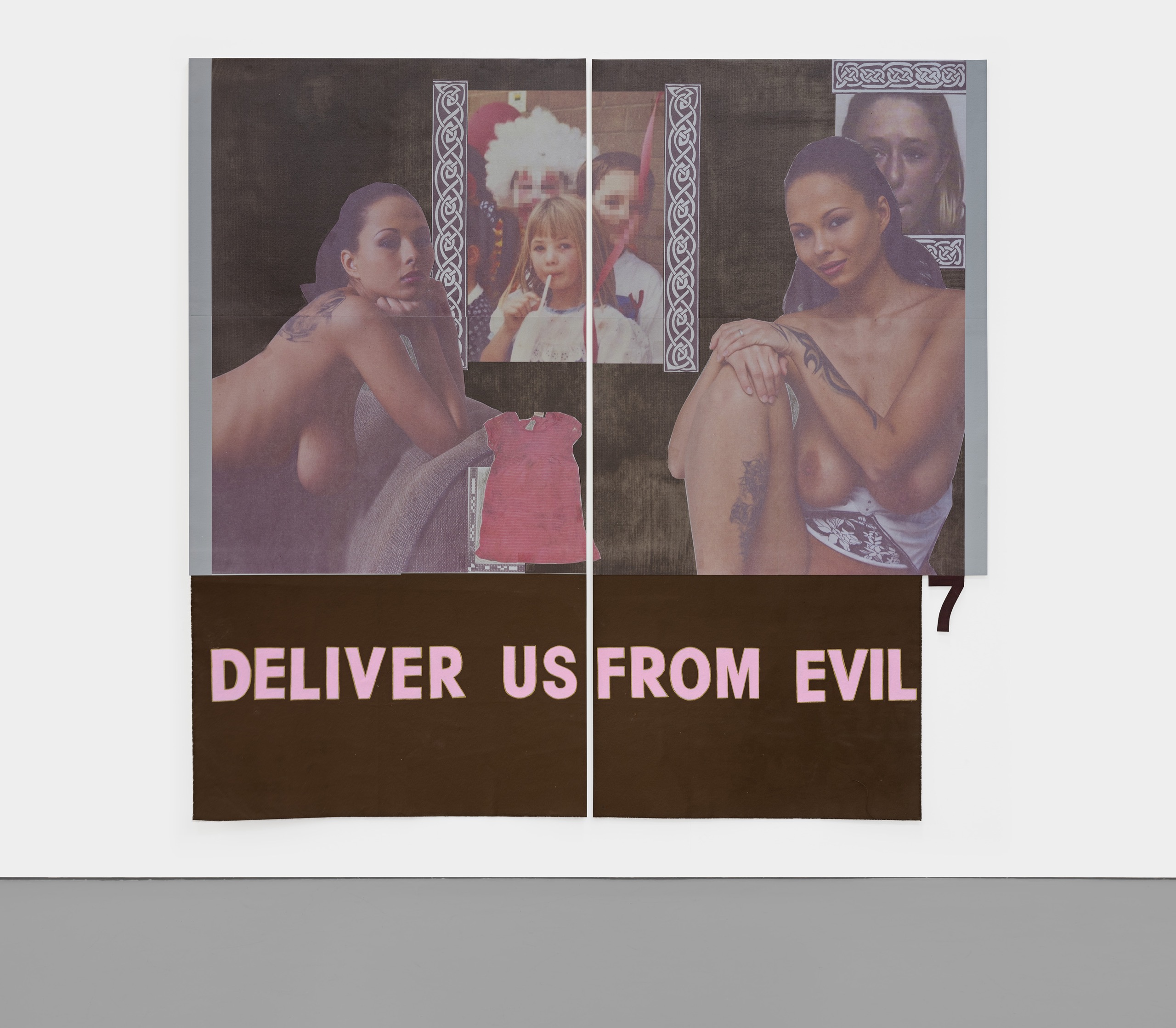 ‍Living Content: You had your first institutional solo show last year at Künstlerhaus, Halle für Kunst & Medien, in Graz, Austria. Can you tell me how much mediation was necessary to present your work in an institutional setting? Are you often asked to give artist talks in order to explain your work in front of a public?

Darja Bajagić: Halle für Kunst & Medien is a small institution, and I didn’t have any boundaries for what I could and couldn’t do. I wasn’t asked to censor any of the things that I wanted to show. Plus, I was in regular communication with the curator--it was easy going. They did ask me to participate in a panel and to suggest other panelists for it, but I declined.

LC: Who would you have chosen if you had to?

DB: Probably Vanessa Carlos, my gallerist at Carlos/Ishikawa. She’s in tune with what I’m doing and she has a sense of humor, which I think is essential. Anybody that I would’ve picked would’ve had to have a sense of humor--not just in regards to the work, but in general. Another panelist would’ve been Natalia Sielewicz. She is one of the curators at MoMA Warsaw. She wrote a text for that catalog, and I appreciate her interpretation of the work. And Franklin Melendez--he gets it.

LC: You said in an interview that the formal aspect of your work is often inspired by games like chess, crosswords, and puzzles. Can you tell me more about how you use these analogies? And is your practice research-driven and project-based or do you mix these references on a more visual level allowing the connections between images to materialize later?

DB: Content always comes first. All of my projects are heavily research-driven. The formal aspects are series driven. That’s a part of the puzzle description. For a show, for example, there would be multiple content and formal components: paintings, sculptures that complete each other, even though they may be stand-alone pieces. Well, maybe not sculpture per se, but I say sculpture sometimes as I see the paintings that way. A lot of the time they’re left unstretched, becoming affected by the humidity of the space; corners curl up, which is effective, especially with the flap pieces. Anyway, every show has a formal identity that binds it together--this is important to me. The aestheticization of the content is integral because a lot of it, the imagery, is “dark” and therefore difficult to access or breakthrough, as it may ignite [immediate] aversion. Not to say that the work itself doesn’t read “dark” as it is, but I try to alter the content so that at first glance things appear more ambiguous, with gaps. For instance, with the headshots of missing girls, on its own, one of these headshots is just another face, a picture of a girl--sans context--it’s vacant of meaning; almost nothing. However, once the narrative of the picture is brought to light, this image takes on a totally different, ominous tone. This flip-flopping that occurs, within seconds of knowing, is essential. The titles of the works divulge glimpses of the narratives within, via the names of the faces. So, this is what I hope for: for the works to have an openness so that they can “switch.”

The text plays a big role, too. The text I pick is usually tongue-in-cheek. I hope, too, that the viewer’s interaction with the material is complicated, as that is how it is for me.

LC: So the tension lies specifically in this ambiguity that your work creates, by simultaneously resisting to and giving in to a narrative. What is the main motivator for creating these ambiguities around these specific narratives?

DB: On a daily basis, I’ll idly encounter these images and narratives in places like the Daily Mail, for example, which is trash news, sure. There is something in reading worthless garbage, like “Two men and a woman caught having a threesome on a rooftop claim they ‘were just watching the sunrise’” following “Police arrest three relatives over the unsolved murder of ‘Little Gregory’: Smiling toddler was found tied up and drowned in 1984 in chilling case that still haunts France,” all the while seeing ads for a 7-Eleven Big Gulp® or suggested articles on bras that’ll effectively triple your cup size. As an experience, it is desensitizing.

All of their stories are over-sensationalized.

Also, as is just the statistical truth, it’s the pretty missing girls that are fixated upon (sometimes tragically, such as the fate of Brittanee Drexel, who was murdered after her disappearance generated “too much media attention”). That’s just a fact. It’s always invasive, too--they’ll take images from victims’ still-active social media accounts. Sometimes, unnecessary information is present. I mimic these ways. I include glimpses of the real narratives, although never enough. I prefer to build on the narratives with other, outside narratives. It’s in service of creating a confusion that is conducive to disturbing [a fixed] perspective. For example, I’ll often focus on both the “good” and the “bad” in a single piece, although they may, on a surface level, appear to be not too dissimilar.

In early works, I was creating unstable ground by mixing images of real crime scenes and victims with those from gore and horror-porn, false snuff fanzines. So, you’d have a girl sawing open a realistic-looking figure together with the real thing, similar to it. If you’re aware that what you’re seeing is fake, you’ll have a different relationship to it than if you’re aware that it’s real. There are different ways of approaching difficult imagery, and I believe that coming to terms with the cruelty at the heart of humanity, as a cultural fact, is worthwhile. In film, for example, this is a more common exploration--this freedom is lacking in a lot of art destined for gallery consumption, in my opinion.

In regards to a position, mine is unimportant. For me, it’s more of a mimic and reflect process. And just like the interaction I’m aiming to achieve, there is no single correct or true position or interaction--they are all equally valid.

In the discussion of media, how stories are framed and to what effect is of interest to me. I play with this. For years now I’ve been using these motorcycle patches that my father, who is a long-haul trucker, buys for me on the road. The best ones are disturbing and funny. Lately, I’ve been placing them directly over images of some of the girls’ whose tragic fates I’ve been fixated upon. It’s the flip-flopping thing I spoke of, but, also, an exaggeration or play on the portrayal of these victims through news stories. How many times have you seen articles that hint at that the tragic fates of “problem” individuals are defensible or were expectable outcomes? I try to put myself into the headspace of various readers and explore what possible reactions they’d have, whether they’d be empathetic or hateful.

LC: Can you tell me more about your collaboration with Joseph Druce - a convict with a double life sentence for murder?

DB The main collaboration is still a work in progress, and it’ll include two other individuals in prison. For about four years I’ve been buying murderabilia, mostly from my friend Eric Holler who runs Serial Killers Ink. I first saw his drawings there, in which he incorporated these slogans, and I felt really connected to his style. One of his more memorable ones is “Save A Child, Kill A Pedophile”. The text in my work is always sourced, and I wanted to use his words, so I approached him directly to collaborate. For the paintings using his slogans, I used images of victims of pedophile murderers, together with Dominno, a busty and very womanly-looking pornographic actress who is often shot in too-small children’s clothing. So, that’s how it correlated to his story, as Joe is a former child abuse victim who, while already serving a life sentence for another killing, killed John Geoghan, a former Roman Catholic priest who was convicted of sexually abusing 147 children. In Joe’s eyes, he is an anti-pedophilia campaigner. That’s what attracted me to his story as well--the complexity of his case, and how he depicts it through his drawings. In one, he drew a portrait of Geoghan alongside his, with the text above Geoghan reading, “stole the innocence of 147 children: 8–10 years,” and the text above himself reading, “stole the life of one pedophile: life w/o parole”--at the very bottom it reads, “JUSTICE?!? no/yes, no/yes, no/yes.”

LC: How personal do the conversations got between you and him?

DB: I suppose personal is subjective, but so far the most personal it’s gotten is the topic of food, like how much a Big Mac costs behind bars.

LC: What is necessary for someone to truly access your work in the right way?

DB: Having a judgement-free mind. Being able to enter into headspaces other than your own.

LC: Is it more about empathy then?

DB: It’s part empathy. Because even with someone like Joe, you could say that he’s a “monster” for being a murderer, but a lot of people could be a Joe, are they met with the wrong circumstances in life. This is not to excuse his actions, just to provide an alternative read of his story. Yes, murder is murder, but who’s to say whether or not stealing the innocence of hundreds of children is more or less “bad”? I don’t think it’s right to judge in a black and white way--things are much more complex.

LC What are some of the ongoing sources of inspiration for your work? What are you reading or looking at?

DB I browse various news outlets on a daily basis. I like to read the small town ones as well. I don’t really look at other artists’ work circulating in the gallery system--it hardly inspires me, other than some older figures every now and then. I am obsessed with medieval illuminated manuscripts--a blog I visit frequently is the medieval manuscripts blog ran by the British Library. I’ll often look to music for inspiration, too. A very young source of inspiration was Mikko Aspa’s Nicole. If it’s not obvious yet, I prefer things that are open-ended and this often effectively happens in visual art for music.

I’ll end it with one last, long-standing inspiration, and that is Sade’s Justine and Juliette.