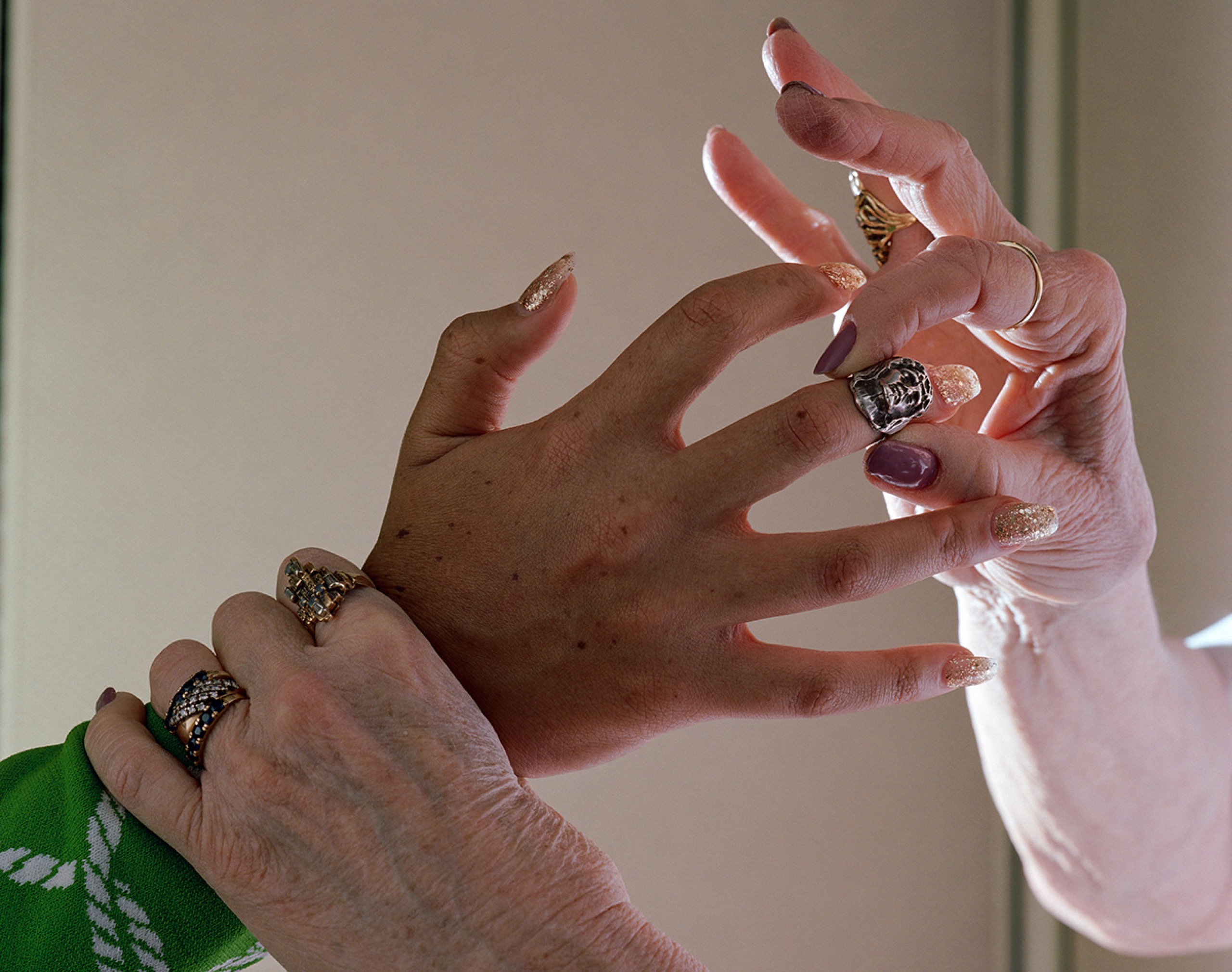 It goes without saying that the images that Torbjørn Rødland creates are strange. The viewer’s inability to explain them is an important part of what makes them so seductive. Questioning Rødland’s photography never offers simple answers, it only births new sets of questions, until all potential coherent narratives fray. When Rødland was interviewed for Living Content, he was on his way to Stockholm for the opening of his traveling exhibition Fifth Honeymoon at Bonniers Konsthall. Fifth Honeymoon initially opened at Bergen Kunsthall in Norway, in May 2018, and after Bonniers Konsthall, the exhibition will further travel to KIASMA in Helsinki. We took this as a departing point in our conversation and we talked about some of the driving forces behind Rødland’s compositions, his relationship with art history, and about his intentions and technical processes through which he is developing new bodies of work.

Torbjørn Rødland was born in 1970, in Stavanger, Norway and he currently lives and works in LA.

‍Adriana Blidaru: Your exhibition Fifth Honeymoon traveled from Bergen Kunsthall to Bonniers Konsthall in Stockholm, where it opened this month on the 13th of March, and will travel further to the Museum of Contemporary Art Kiasma in Helsinki in September 2019. Why the title Fifth Honeymoon?

Torbjørn Rødland: I’m deeply fascinated by culture wars and cultural evolution. What kind of journey or union can develop from repeated crises and past fragmentation? I think that’s in there… in the title. Or, to paraphrase late 90s Cher, what does ‘love after love’ feel like – and do we believe in it? Photography to me was always an old medium, a layered and difficult medium. But the title should also be read more literally: here’s another object or body dipped in a sticky sweet substance.

AB: How did you create the compositions for this show? And how did the work respond to being presented in different spaces and different contexts so far?

TR: The pictures often end up needing other neighbors in a new space. It’s helpful to rethink the installation each time rather than try to translate from one venue to the next. I think energy would be lost if I insisted on repeating as many pairings and groups as possible. Each show should be individual. Bonniers is bringing in some older work also. The photographs don’t suffer from trying on other neighbors. Ideally, it brings out another side to them.

AB: I’ve noticed that there is often a time gap of several years between the moment you see the photographs you took on the contact sheet and the moment you decide to print them (like in the case of Levels of Unreality, 2008-2018). Can you tell me about this process: what triggers you to return to a photograph from 2-3 years ago, or even 7-10 years ago?

TR: It’s a waiting process. At any time there are, say, a hundred images waiting for a suitable context. As long as I don’t work on a concentrated series, a single image may have to wait around for years before a book or an exhibition is right for them. I’m slowly and intuitively developing bodies of work.

AB: This idea of ‘suitable contexts’ made me wonder about how comfortable you are working with curators and how much freedom do they get to have in curating or recontextualizing your work. And, perhaps even more generally, just how much control do you like to have over the circulation of your images?

TR: Oh, I’m very comfortable working with curators but it’s hard to say something general about this. All contexts aren’t fruitful. Some seem to limit the individual image rather than help it realize its potential. Nothing is better than having the work discussed by a brilliant writer or recontextualized by a curator with a strong individual project or vision. I also don’t mind certain images being memed, etc, even if the result is horribly profane.

AB: You don’t use a lot of post-production but in specific works, like Painbody no. 1, Painbody no. 2, and Painbody no. 3 from 2015 - 2018, you use techniques of superimposition. Is your intention here to disrupt or to complicate the images?

TR: I’ve made in-camera multiple exposures for more than fifteen years. It’s another way of constructing a fantastical pictorial space from traditional, analogue techniques. The double exposure is an established photographic mode of expression that somehow belongs in my overall project of synthesizing different stages of development.

AB: Can you talk a bit about your relationship with postmodernism? You often mention it as an important stepping stone for your practice, or as “an inheritance”, but at the same time, you are also being highly critical of it.

TR: That’s exactly right. It’s like a parent in this regard. It lifted you up and made you who you are. It was very impressive when you were young, but then you became way too conscious of its shortcomings. There’s no rejecting it though. The challenge is to transcend and include.

AB: And where did transcending postmodernism lead you thus far?

TR: Closer to the gods.

TR: The materiality is just one side of the photograph and to me it’s not the central one. I’m an image-maker standing on the shoulders of a “pictures generation”.

AB: Let’s talk about your latest film “Between Fork and Ladder”. This is the first film you made in eleven years. Can you tell me more about how this came together? And how do you conceive the relationship between photographs and moving images?

TR: They’re very different, but I have a strong interest in sound. All my video-curiosities now center around spoken word or musical ideas, but there are also visual sensations that cannot be rendered photographically without movement. And I’ve always loved the cinema. Between Fork and Ladder started as a very different project, centered around two semi-scripted artist interviews. But then I lost one of the two female leads. Instead of trying to replace her with another actress/vocalist and redo the interview, I let the movie organically morph into something else entirely. And it loops after less than six minutes. I’m very happy about that. Video art tends to run too long.

AB: I noticed in the video the infamous meme “Pepe”, and I know that you are interested in how images are shared, hashtagged and circulated in popular culture, but I’d be curious to hear more about your decision to include that meme specifically, and, more generally, about how you see this relationship between memes, language and pop culture, relating to your work.

TR: The appropriation of and fight over this character and its symbolism grew from a part of the contemporary dialogue that you don’t often see reflected in art. Maybe that’s why it felt fresh to me. A blonde boy is seen cutting up a Pepe-patterned fabric but the film doesn’t tell you if the scissoring should be read as a protest or a celebratory act.

AB: What conventions, myths, or archetypical images do you find yourself most interested in?

TR: I’ll have to say the ones that show up in my work. The ones that haven’t shown up yet I don’t want to tell you about because I’m saving them for future images.

AB: What about a favorite meme?

TR: Nothing comes to mind. No memes, no quotes, no favorites.

AB: I gathered from multiple previous interviews you had, that you encourage viewers to read your work through the dualities it represents, but with an emphasis on the whole rather than the differences. How did this arise in your work, and why is this reading important to you?

TR: You can’t always trust an artist to know what’s going on in the work. But then again, who has a convincing take on my photographic output? I’m an intuitive creator with an analytical carriage attached, and I’m happy to offer clues as to what I think it’s all about and where I think it’s heading. The manifest universe is polarized, and the right move is from polarity to unity. I probably know that instinctively. I look for truths behind or within silly surfaces. That’s just who I am. Religiosity arises in the work because we’re a religious species.