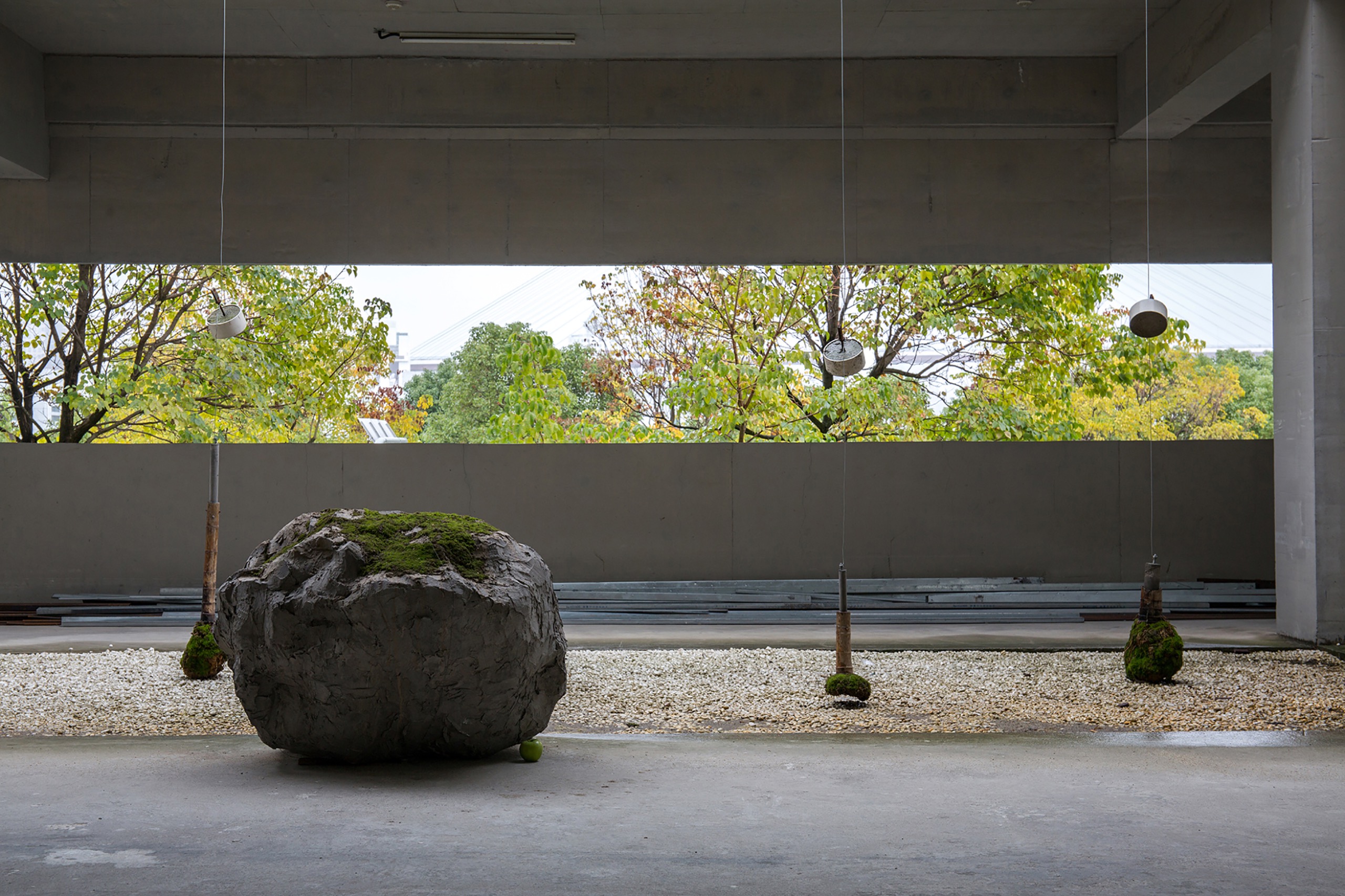 Yu Ji’s practice is composed of sculpture, installation, video, and performance, and it focuses specifically on the intrinsic quality of the materials that she is using. Yu Ji discussed with Adriana Blidaru of Living Content about living in Shanghai as an artist, and about the challenges of running the only independent non-profit art space in the city. She also talks about her fascination with atavistic memory and how she looks to apply that in her practice.

Yu Ji (b. 1985, Shanghai) obtained her MA from the Department of Sculpture, College of Art of Shanghai University, in 2011. Yu Ji currently lives and works in Shanghai and Vienna.

Living Content: Let me start by asking you a bit about your background: where did you grow up and how did you end up pursuing art as a career?

Yu Ji: I was born and I grew up in Shanghai. Shanghai is my hometown. I started to paint when I was in junior high school, and continued with painting in college for my Fine Arts degree. Compared to other students from my generation, I was not an early bird but my father was a painter, and he was part of the first group of Chinese Contemporary artists of the 80’s, which served as a huge inspiration for me since I was little. My first understanding and interaction with art was through him. As a child, I was always surrounded by a group of young artists with big glasses and long hair, going to parties and to openings… That was my first understanding of what an artist was…

LC: Can you tell me a bit about Shanghai? What do you think makes the Shanghai art scene different? How is the artistic community there? .

YJ: Shanghai is such a big city and it is constantly changing. We like to call it Magic City (Mo Du). Shanghai is where my love lies, but also where my nightmares linger. If you look back, Shanghai has always been a unique city in China. We proudly call it Haipai culture (Shanghai culture). With the history of colonization and the foreign settlements, starting from the 19th century, Shanghai has opened to modern urban facilities, technology, and foreign culture. This city has always been fast at absorbing western cultures and synthesizing them within its own style. Through this combination and conflict of traditional Chinese culture and Western culture, Shanghai built its own Haipai culture. Nowadays, we have a new word to describe it: “international”, but Shanghai always kept its own personality. In terms of collective influence, the most influential movements in politics, art, and culture, never actually sprouted here, but rather in northern China. In my view, Shanghai is a commercial, realistic, and hedonistic city. Because of that, the artistic community here comes in fast waves: it goes back and forth. And within this community I have a more complex position because I am not only an artist, I am also one of the founders of Am Art Space, which I’ve been running with my partner since 2008.

LC: How do you see your space AM Art Space contributing to this community?

YJ: Am Art Space is the only artist-run not-for-profit art space in Shanghai right now. We organize exhibitions, workshops, performance, talks, we give the space to artists, and let them share their practice and communicate with each other. All projects are focusing on the reflection and rethinking of our history, our present situation, and also on what we can do for the future. But, as I mentioned, AM Art Space is a not-for-profit, which has been very difficult to sustain in a country with lack of support and funding for art. Now, since 2016, I moved my studio in the same building as the space, so my art practice and my work for the space are in unison.

LC: Your practice is very processed-based and it seems located somewhere between fragility and monumentality. Can you tell me about the materials that you are using?

YJ: Now I’m more focused on organic materials and construction materials, or to put it differently: natural materials and man-made materials. I have been making sculpture both throughout my undergraduate and my graduate degrees, so I learned a lot about the intrinsic characteristics of different materials. This has been my way of working, and, in a way, a methodology that I cultivated. In my work, I’m not just trying to control the medium, but I’m rather trying to learn from it: how to relate and communicate with it and also how to allow it communicate with its surroundings.

LC: I would love to find out more about your project “Flesh in Stone”: how did this project begin? How did you arrive to this abstraction of human representation?

YJ :The human body has always been an important yet obscure part of my work. During this working process, I deliberately downplayed the physical characteristics or features of the body. I chose not to obsess over details, and I removed any dramatic elements or gestures from my work. I was curious to see if flesh itself carries any emotions, if it moves people even if it does not represent any one person, showcase any physical details, or any anatomical accuracy. The bodies displayed are unlike the realistic representations of what I worked on previously. And displayed along with the bodies, were also installations and sculptures produced from wax (four to five pieces). The materials they were made of included paraffin wax, ozokerite, and beeswax. Wax is a gentle and self-indulgent material, which is oil-based soluble but also resilient. This is a special material, as it is the closest to human skin. Wax covers up the familiar yet abstract form of the body, creating a stark contrast against parts of the body.

LC: Your work seems to have a strong site-specificity to it (I’m thinking here about your participation in the Shanghai Biennale –where you took over a parking garage). Can you tell me about your process when creating an exhibition? What is your starting point?

YJ: I am more likely to make work that comes out of experimentation with materials and specific spaces. I have to see and feel the space before thinking of a show. For me, it’s not the idea that is the most important, but I am more fascinated with making a connection with a space: to communicate with it and to befriend it–and this means to really understand it, so I can find a commonality. After this, an idea will come up naturally.

LC: I saw a lot of your previous interests synthesized in the Hugo Boss Asia Art presentation–including the abstracted representation of bodies that we were talking about earlier. Can you tell me a little bit about how this show?

YJ: From the very beginning the organizers emphasized that the artists should show works that are representing their practice best. Of course, I presented my cement figures, but I also felt that I should do something different, something new. So I made a group of broken, distorted, body parts–which was a new take on my previous work “Flesh is Stone”, and I also built a stage in the space. In a more explicit way, my works were playing a role and were in dialog with one another, but also with the architecture of the room: with the natural light, with the columns, and even with the ceiling in the room. So everything worked together like a spaceship. Within that set-up, there were both personal and collective memories floating around. For example, I used several black and white images printed on thin film: one was from Athens, the column in Acropolis, where I spent a whole month last year, another one was of the famous sculpture The Kiss by Auguste Rodin, which I took at the Rodin Museum in Paris, where I was in a six months residency at Palais de Tokyo. Walter Benjamin wrote an autobiography based on the activation of an atavistic memory called ‘Berlin Childhood Around 1900”. The novel is based on both Benjamin’s involuntary memory and his conscious memory, which operate simultaneously to place events and objects in a wider context of time and space. It is not created as a return to the past, but more as a desire to understand and map the past. I wanted to adopt this literary approach to create my own world, by spotlighting events and objects, and simultaneously to compress the past into a vacuum, in the hope that it might provide a structure that could be read in the future.

LC: Can you recommend something that you have an affinity for–maybe that influenced your work?

YJ: I love films! There are too many great films that influenced my work, but just to give one or two examples… Jean-Luc Godard’s Pierrot Le Fou, which I just watched again last month. This movie always makes me feel better. Another one is Edward Yang’s Yi Yi, again, you can just watch it year after year, it’s part of everyone’s history, current reality and future. As for books: I would say Josef Conrad’s Heart of Darkness - one of my favorite fiction books. And Ernest Miller Hemingway! I love Hemingway’s writing on nature and adventure, especially A Moveable Feast. Highly recommend it!