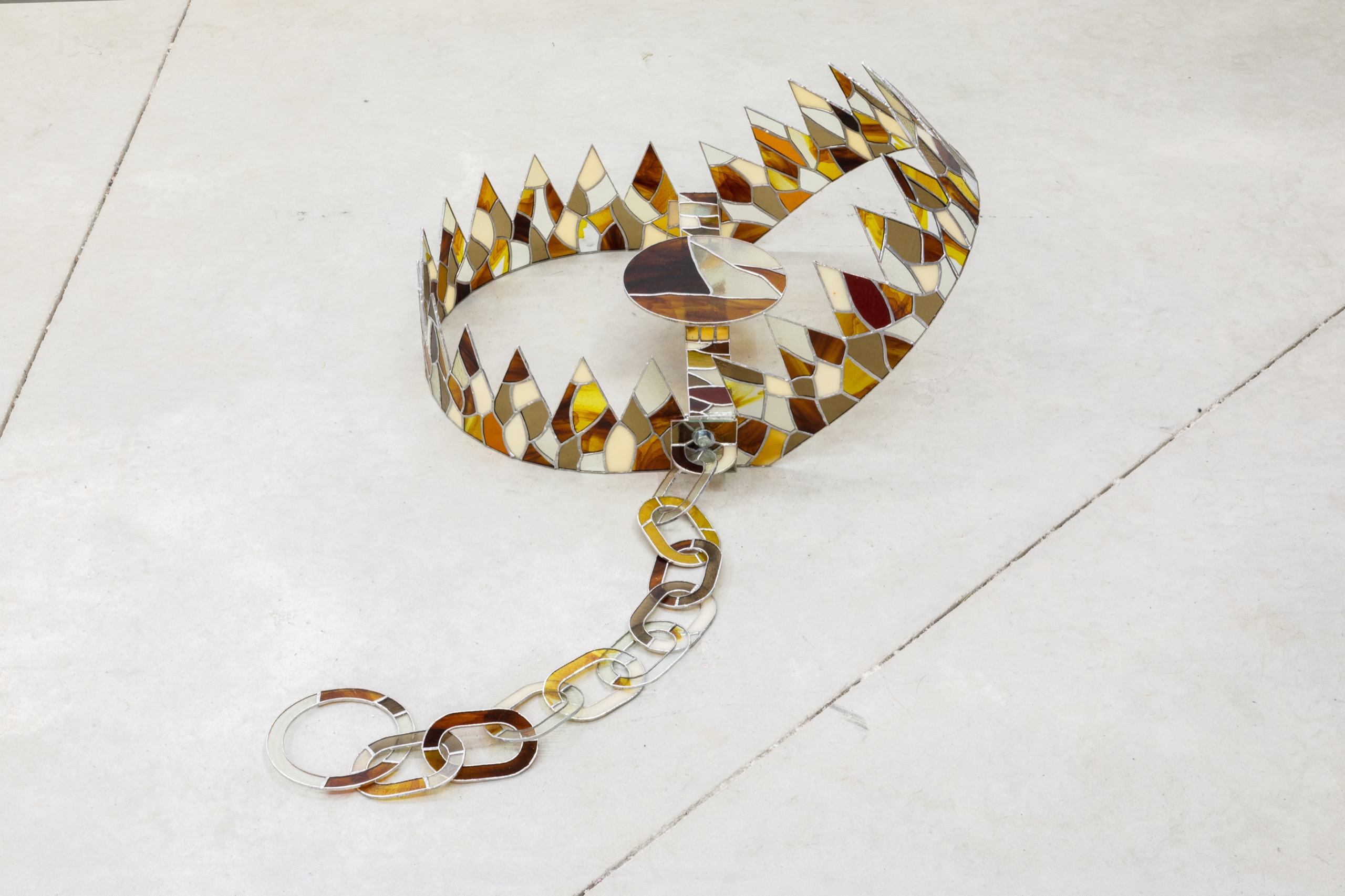 As part of featuring the exhibition I don’t know whether the Earth is spinning or not… Living Content presents an exclusive conversation between the co-curator of the exhibition, Lizaveta Matveeva, and  participating artist, Fin Simonetti. Lizaveta and Fin talk about the process of adapting the installation work for the online sphere, about the labor-intensive production that is generally involved in Fin’s practice, and about the affinity and implications that the artist has for sound and music-making. ‍

I don’t know whether the Earth is spinning or not… is part of the Main Projects of the VII Moscow International Biennale for Young Art, and it is curated by Lizaveta Matveeva and Francesca Altamura. 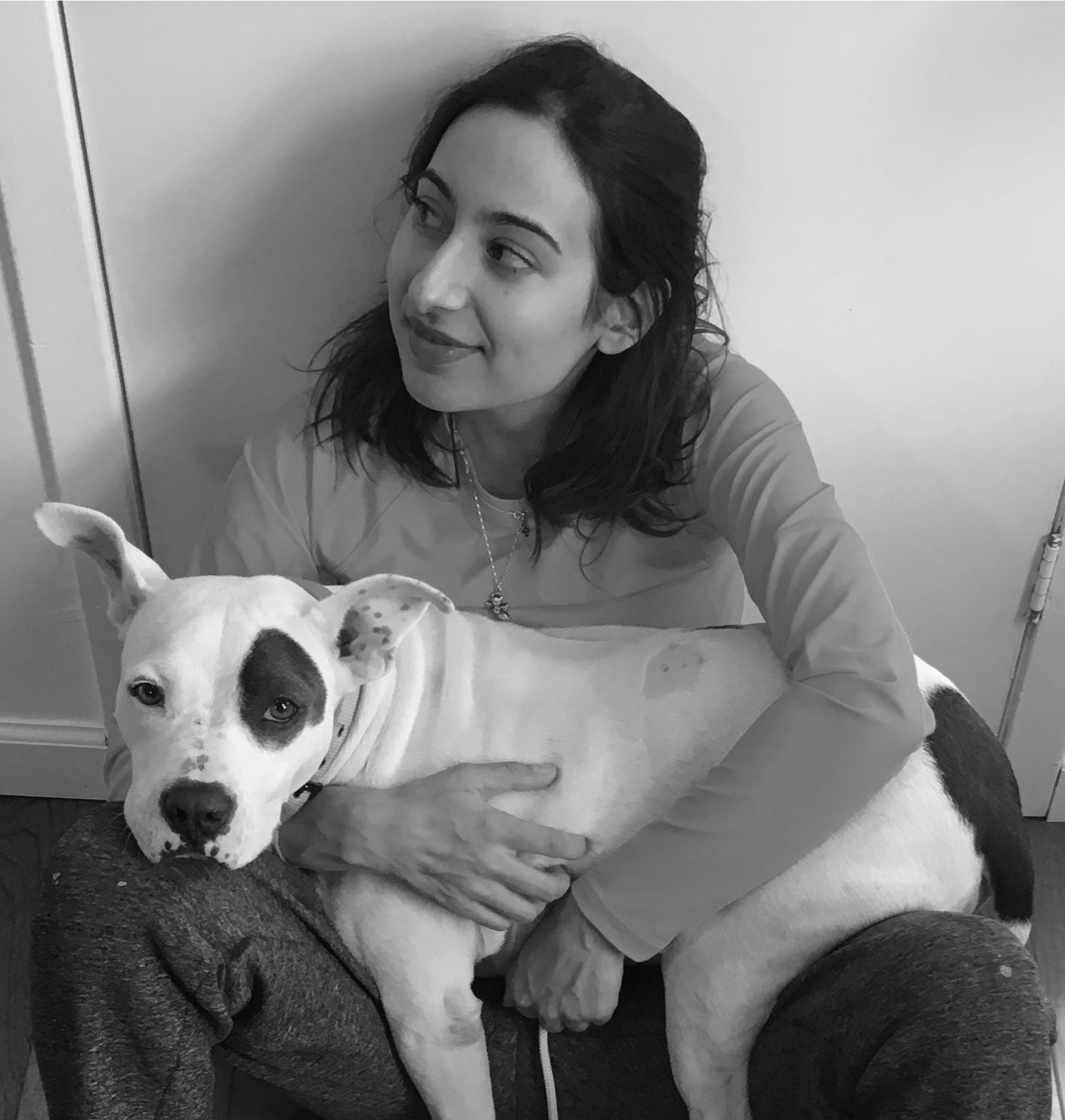 Fin Simonetti (b. 1985, Vancouver, British Columbia) is a Canadian artist and musician based in New York. Recent solo exhibitions include Head Gusset at Cooper Cole, Toronto (2019); Pledge at Company Gallery, New York (2019) Pastoral Emergency at SIGNAL, Brooklyn (2018). Group exhibitions include Material Conditions at Matthew Brown, Los Angeles (2020); Dog Days at CLEARING, Brooklyn (2019); among others. Recent projects include a book with Rita Ackermann published by Innen/Nieves, and her debut album ICE PIX on Hausu Mountain, 2017. Fin is represented by Cooper Cole in Toronto, and Matthew Brown in Los Angeles.

Lizaveta Matveeva: Your practice has a very strong connection to craftsmanship. The labor you exert to carve stone, for example, is apparent and you work with extremely tactile materials such as glass, marble, alabaster, and metal. One of your works, Means of Egress (2020) commissioned for the digital exhibition curated by myself and Francesca Altamura, I don’t know whether the Earth is spinning or not…, exists as an immaterial and net-based work. Can you share your initial reaction to drastically adjusting the fundamental nature of your practice? What was your experience in producing this work?

Fin Simonetti: I guess it’s apt that I immediately thought to use a physical installation as a starting point. And in terms of working digitally, collaborating with Gregory Kalliche was very helpful, since his work is primarily virtual. Music is one of the few immaterial channels I work in, so it made sense to bring in.

LM: From what I understand, sound means a lot to you as an artist: you specifically engineered the soundscape for Means of Egress. What about sound calls you? Can you detail what your relationship is to audio and how it relates to your physical work?

FS: On my end, making music feels less dissimilar to making visual art than most people expect. Think for example of how sound and sculpture are both sensorial and spatial. Of course, the formal differences affect my experience of the process, but both are the result of translating something internal. Sound is maybe an escape hatch for less concrete ideas, more spontaneity. I’m usually working on music simultaneously with my visual practice. In terms of output, at a certain point, I decided to prioritize art. This is in part because my work is labor-intensive, but also because it just feels more urgent. But music is always cooking slowly in the background. This means that there are 5 years between albums, and that’s fine with me. It simmers.

LM: Can you describe the labor-intensive process you mention?

FS: Right now the two main materials I work with are stone and stained glass. Both mediums are incredibly labor-intensive, but stone is particularly grueling. I actually started weight lifting to improve my endurance! And since I carve outside, it’s a constant battle with the weather; right now it’s increasingly hard to stay warm — especially at night. Carving at night is a new thing for me... there just aren’t enough daylight hours in the winter. Trisha Baga lent me her giant movie lights. They are incredible, they turn my work station into a movie set.  It’s so cinematic! I get completely lost in the process, especially at night. Well, until I can’t feel my fingers...  Sometimes I use a blowdryer to warm my hands.

In terms of the actual process, I use a mix of traditional hand tools and power tools.  In the first stages, I use an angle grinder and die grinder to remove chunks of negative space from the raw stone. Then I start chiseling, one small chip at a time. Once I’m within a few millimeters of the desired shape, I use rasps and rifflers to file down the stone, and then 9 grades of sandpaper to smooth the surface. For both power tools and hand tools, I wear super thick anti-vibration gloves to reduce some of the impact. Stone carving is the devil’s work. You have to really love it.

LM: When we invited you to participate in the exhibition, you decided to make the work collaboratively with your friend, artist Gregory Kalliche. Was this your first-ever artist collaboration? What was this process of working together like?

FS: Greg and I are friends, but this was our first time collaborating. Essentially I wrote up some text in relation to an installation I had made for LIFEMORTS [at Interstate Projects], thinking about notions of security and protection, the delineation of private vs public space, inside vs. outside. These are themes that Greg has touched on in his own work, so I was interested to start a conversation with him. From my text and the documentation of the LIFEMORTS installation, Greg built out the digital visualization using his own language, and I made the soundscape in response. I mostly work alone, but in the past, I have collaborated on videos and performances with FlucT and Eartheater, and occasionally I will make a piece with my sweetheart Michael Assiff. Michael and I have studios in the same building and are in constant dialogue about what we are working on.

LM: Throughout your practice, you’ve played with imagery from security signage, railings, fences and blockades, warning signs, and (dismembered) attack dogs, which are often created through fragile and stubborn materials like glass and marble, respectively. The reflection on how daily life is masked by false symbols of protection and security to mask anxieties and fears creates an environment of great tension. Is this the place you hope the viewer exists in when experiencing your work?

FS: In a way, yes. Take the example of the security stickers in my work—all of which were ordered online separate from a physical security system. The idea here is that the sense of protection functions regardless of whether there is a system in place —the sticker "signals" security, and that is what actually matters. I connect this idea to religion, specifically as an entry point into magical thinking. Like a fence around a house, one’s belief system operates on a symbolic level— adding another layer of imagined protection.  A conclusion might be that if real safety is not viable, then these signals serve as placeholders to assuage our fears.  I don’t mean this in a purely critical sense.  I want to understand the coping mechanisms we construct in the face of danger, grief, trauma, and oppression.

LM: The overarching theme for I don’t know whether the Earth is spinning or not… has examined absurdity as a means with which to contextualize today’s dark and depressive realities. Can you relay what you find most absurd in the era post-Covid-19 global pandemic? Do you think life will ever not be absurd?

FS: No… haha. It seems as if in almost every arena of life we have arrived at opposing and simultaneous realities. A generous read of the situation would be that at least it’s psychedelic… It feels like we are in a permanent state of hypernormalization. I think humans will probably adapt, with new coping mechanisms, further magical thinking, and so on.

LM: I might say, art can be this magical place of thought. Are these opposing and simultaneous realities manifested through your work?

FS:  Art can be a useful tool for expressing ideas that are contradictory and ambiguous. This rings true for my own practice. I am most interested in ideas that are unstable. For example, I try to render both protection and vulnerability simultaneously, and the slippage between these two states.
For my opening at LIFEMORTS, I hired an armed bodyguard to shadow me throughout the night. I didn’t say anything to anyone about the piece, nor did I name the performance upfront. Obviously, the armed man in a suit hovering a few feet from me, charged my social interactions with a kind of tension, an ambient sense of danger... whereas I was also safer because of his presence. With this performance, I was also thinking about how his power extended my own. Sort of like a boxing glove. The piece is called The Extension. Throughout my work, I am interested in the line between the body that is a threat, and the body that is threatened.

Lizaveta Matveeva is an independent curator living in St. Petersburg, Russia. She recently curated "I don't know whether the Earth is spinning or not...", with Francesca Altamura, one of the Main Projects of the VII Moscow International Biennale for Young Art. The digital exhibition is on view at notspinning.world. In 2021, they will curate a group exhibition together at Haus N, Athens, Greece. She works as Project Manager in the internationally renowned organization CEC ArtsLink which encourages multi-cultural collaborations between former Soviet Republics, Russia, and the United States. She co-curated exhibitions at the artist-run space LUDA gallery together with artist and curator Peter Belyi. Her recent shows include «Stranger Stories» at MYTH Gallery, St. Petersburg, Russia (2019–20); «The Brotherhood the New Blockheads» at Mishkin Gallery, with Peter Belyi, at CUNY, New York, US (2019–20); «The Brotherhood the New Blockheads,» with Peter Belyi, at Kunsthalle Zurich, Switzerland (2019); «The whole world was not accessible to my gaze,» with Francesca Altamura, at The Carillon Gallery, Tarrant Community College, South Campus, Fort Worth, TX, US (2019); and «Frozen» at Start Space, Winzavod, Moscow (2019). She has advised the Garage Museum of Contemporary Art, Moscow and the New Museum of Contemporary Art, New York about the contemporary art scene in St. Petersburg. She also curates SAM Fair at the Museum of Street Art, St. Petersburg. Matveeva holds an MA in Curatorial Studies and Art Criticism from CCS, Bard College, and Smolny College, St. Petersburg State University.

I Don't Know Whether the Earth is Spinning or Not...