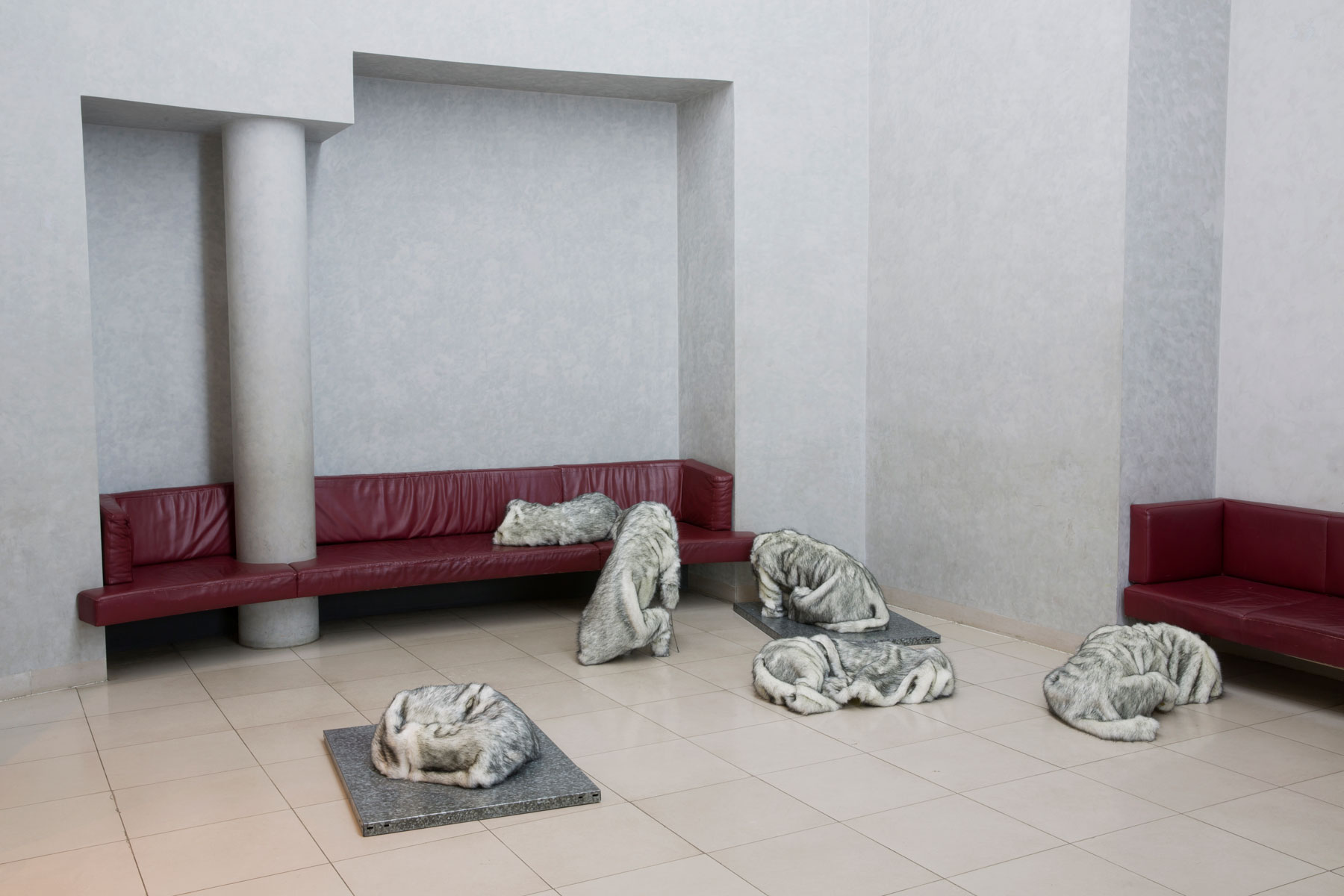 In any given exhibition space Hanna-Maria Hammari’s work creates a feeling of unease, often by mimicking the shapes of certain animals or body parts. She questions why certain things cause us discomfort and what does this say about us?

After a zoom studio visit, Hanna-Maria and LC’s Adriana Blidaru revisit in writing some of the key points of their conversation. The artist explains her shift in recent years from video and photography to a process-based practice and her infatuation with mastering materials like ceramics to create diversions and subvert expectations.

Adriana Blidaru: What are your main interests these days? Can you give us a glimpse of how your work developed over the past five years or so?

Hanna-Maria Hammari: I am very much a studio artist, and much of my time is spent engaging with different materials and techniques that I try to "master" with wildly varying levels of success. The materials, be they raw or already processed by others into existing objects (I have a huge collection of flea market finds that are an endless source of inspiration), are at the core of my working process. Alongside craft, which for me is a site of the long standing relationship between humans and the environment, this creates a place where something new can be understood, gained and created. In earlier stages of my artistic practice I was mainly involved with photography and video, mediums that I have all but abandoned since, in favour of the more tangible materials, but I think they are still at the core of my work. I often make sculptures and installations that work as images of themselves, sort of exploring different avenues by which perspective becomes a projection. Central to my work is the body and its boundaries, both in humans and non-human animals. I am very interested in post-human theories, but I believe my work finds itself rather smack in the middle of the anthropocentric, expanding on the idea of sculpture as a site of internal reflection. Through questions of otherness, reproduction and sexuality, as well as mortality, I investigate the workings of bodies, their limits and various shells, which protect or otherwise define them in relation to the world.

AB: These are all big topics - but it seems like what they have in common is that one’s entrance point in these works happens through the ‘uncanny’ . Why are you aiming at creating this initial discomfort for the viewers when they encounter your work?

HMH: I really don’t set out to go for the uncanny from the get-go! But I am very interested in approaching my work through and from a phenomenological and affect-orientated way. This, for me, puts the emphasis on the process of engaging with the materials vs trying to premeditate or force anything into a vision or into preconceived effect and/or affect. I try to let the vision inform itself. It's very much about witnessing what the work can do and letting it do that. That said, I find the uncanny a very fascinating and telling psychological phenomena, as it relates to a feeling of recognition, of familiarity of something you feel you know but that is somehow "off", and hence becomes unsettling or even scary. What does it mean when the familiar becomes scary / unsettling? My interest in the uncanny as a quality in some of my works is about getting insight on what makes us feel uncomfortable and, more importantly, what that discomfort can tell us about who we are.

AB: A work that obviously shifts between comforting and threatening is the Pregnancy Armor (2019). I noticed that there are some references to “womanhood” in your work that keep reappearing through biological-like allusions: forms of vulvas, references to pregnancy. Through this perspective, in the back of my mind, even the work “Pack of Wolves (2017) becomes a matriarchal pack. Can you tell me more about this?

HMH: I love the idea of that work as a matriarchal pack!

Many of my works could definitely be construed as an investigation into female corporeality and its subjectification. The references to pregnancy you mention for me are references to gestation, both in biology but also in developing artworks. These references work as sites of image production and projection, as sites of imagining, sometimes with profound discomfort, what one’s labour will bring. My focus has been on the discomfort that comes with approaching the edge of one’s body as it produces another, the abjectness and instability elicited by it all. But, as I mentioned, this isn’t related so much to biological pregnancy as it is to artistic production.

The Pregnancy Armor came about as I started working on a series of sculptures resembling animal traps (I believe the traps are what you mean by some of the works alluding to vulvas in their forms). After working extensively with forms borrowed from non-human animals, I was interested in communicating that presence of an Other through a marked absence. A trap became a way for me to model the trap’s victim, but also to model its creator. We read in it the mind of its author as well as the fate of its victim. A trap can be a model that may actually reflect the outward form of the victim (delineating in negative the victim’s contours for example), or the trap may, more subtly and abstractly, represent parameters of the animal's natural behavior, which are subverted in order to entrap it. A trap is like a lethal parody of the victim’s Umwelt. The Pregnancy Armor might then be a parody of the Umwelt of a woman in her mid-thirties. It’s not a pregnancy trap, it’s a protective armor, but in both the latent expectation of violence to the body, or to the self, is rather explicit. This all sounds very serious, which it is, but I swear there is a sense of humor involved in it too! Perhaps the joke is in the materiality of it all, as both the traps and the armor are made of glazed ceramic, rendering them extremely fragile; a streak of paper tigers.

‍AB: These forms that you are emphasizing in your work, oftentimes come under animal-like shapes: tentacles, skins, membranes, sea turtle shells, worm-like / snake-like shapes, and furry beasts, to name a few. Tell me a bit about how you bring these shapes in your work and why? Quoting John Berger here: “Why look at animals?”

HMH: The many animal-like forms you mention, came about for very different reasons, but fundamentally their presence relates to the non-human animal as radically Other and what is at stake, is the ability to think about the Other. How are we to understand that which differs so much from our capacity to comprehend? I am especially interested in it as corporeal thinking that risks itself, mind and body, in these acts of encounters that differ with each animal, with each ‘Other’.

AB: What are you currently working on? And what are you looking forward to in the near future?
‍

HMH: If there was anything even remotely positive about the pandemic, it was that it slowed things down for me in the studio, giving me the opportunity to work a lot with new materials, without feeling the work has to immediately be ready to go out into the world. Spending time with works after they’re completed has been unexpectedly productive for me, as it allows me to get over the heavily invested making phase and just see how the ideas stand the test of me hanging around. I am preparing for an upcoming solo exhibition at Museum Folkwang, Essen, in 2022 as well as working on the accompanying publication. I am also very happy to be doing a residency at Moly-Sabata, Foundation Albert Gleizes, in France this coming summer. It definitely feels exciting to get out into the world and out of the studio for a bit, too.