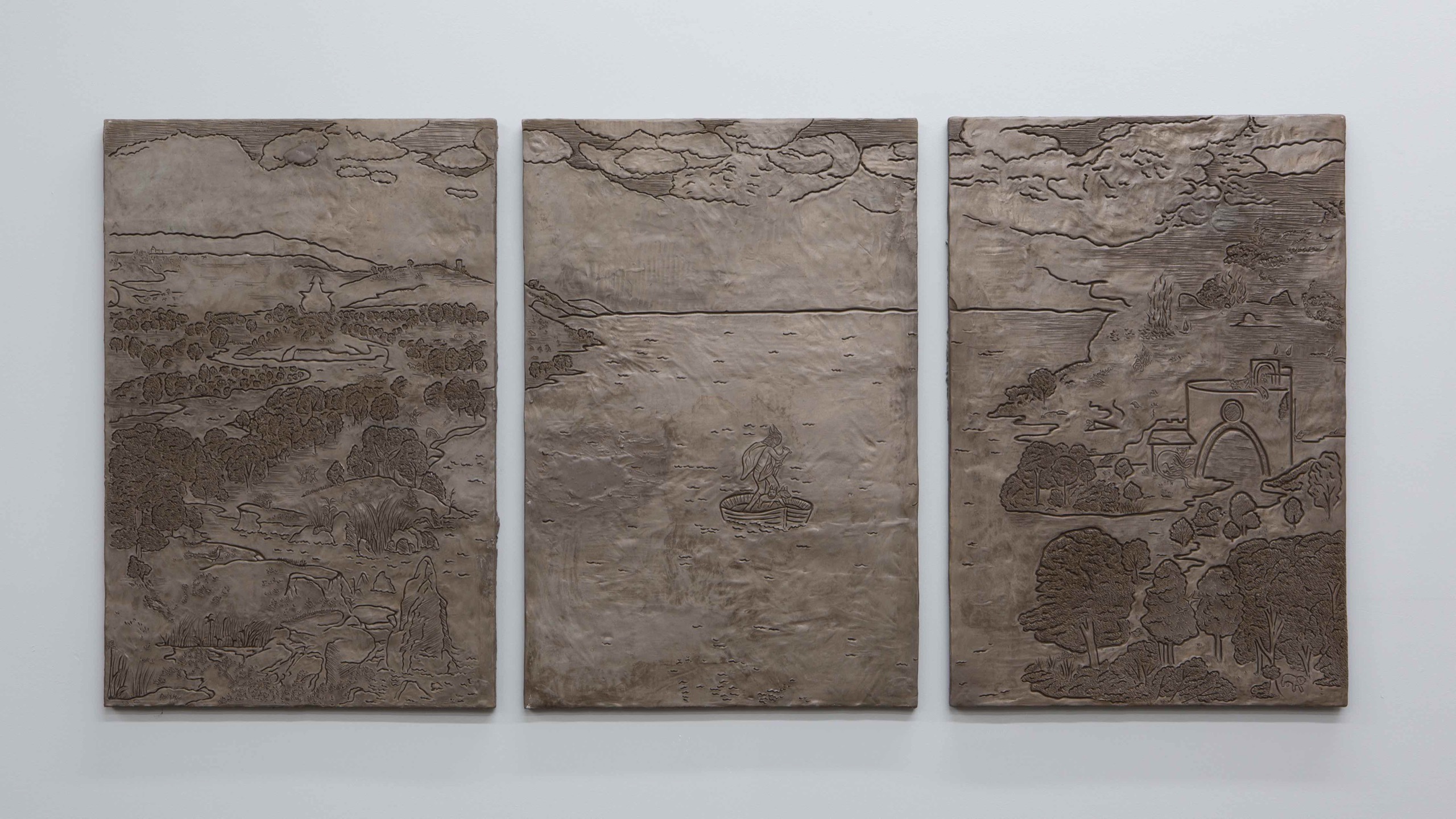 Supposed old old age might show grow old to show what it meant the soul is made of wind instead of warm red liquid (Crossing River Styx), 2019, Cold cast bronze

For Living Content, Cole Lu talked with Adriana Blidaru about The Dust Enforcer (All These Darlings Said It’s the End and Now US) – Lu’s latest solo show at Deli Gallery in Brooklyn. What started off as an exhibition walk-through, led to an in-depth conversation that touched upon Lu’s move from Taipei to St. Louis, and then to New York; on the technical and theoretical processes involved in making each work; on community and outcasts, and on the feeling of alienation that one can experience both externally and internally, as a non-binary, first-generation immigrant in the US. However, the written form of this conversation is a synopsis of all of the above – one in which Cole’s poetic answers function as a map to navigate a distinctly biographical yet critical practice.

Cole Lu (b. Taipei) is an artist and writer based in New York. His work is an active engagement of shifting and reframing the value and worth of what is subject to Others. Lu has read, exhibited, and lectured internationally. His publication Smells Like Content (Endless Editions, 2015) is in the artists’ book collection of the MoMA Library, New York.

Adriana Blidaru: Why look at myth today? What is it that attracted you to using mythology and its history in your practice? Why western myth specifically?

Cole Lu:  Most of the time, my impulse to make work comes from the desire to tell a story. Throughout history, humans from all cultures shaped their identities through narratives. But how to tell a story? There are forms of narratives that contrive truth, knowledge, and disposition, and forms that imply symbols and absolute values. Navigating these types of narratives is like choosing between worlds. For me, the image of the world builds up through creation, production, and interpretation.

I think that art-making is a form of myth-making – an ongoing meaning-making process. Acting as a form of cosmological inquiry, mythology is a product of fantasy but it also possesses its own distinctive logic. What draws me to imply mythology in my work is the causality of the will, in another word “fatalism” - free will as a psychological error. The view that we are powerless to do anything other than what we actually do. My intention of applying–or more precisely of rewriting myth-is to provide alternative perspectives through the lens of the other: the monster, the demon, the evil; an alternative perspective that is apart from the conventional viewpoint that vilifies. As a sculptor, I think of an object as a conversation instead of a fixed entity, and my deeper intention of using mythology is to question, understand, and hopefully, to start a dialogue around the notion and motif of othering.

The thought of applying western mythology came from a very similar place: from the desire to start a conversation without appropriating white gaze. Mythology is often regional. In a small and limited geographical area, a person that attracts attention through unaccounted behaviors is sometimes followed with collective violence or accusations, justified as cosmic consequences. Hence the scapegoat mentality.
As a first-generation immigrant, I received my formal art education in the US. Through years of processing self-realization, I have been actively trying to unlearn the canon from my training. The use of western mythology is intended to exercise an adequate way of unlearning colonial categories of norms. Often, in western mythology–Greek mythology in this case–the internal monstrosity is always aligned with external monstrosity. There is this collective portrait of the monster buried as the seed of a social construction model of ‘the other’. It is establishing a fundamental moral value that someone who appears different from the western standard of norms is evil, hence deserves punishment or misfortune. Aligned with such values that have been perpetuated, things like: skin tone, sexuality, accent, visible/ invisible health condition, act as markers of the other. The rewriting of myth for me is a way to open up a conversation, to see beyond a diasporic subjectivity in which illness intersects with race and queer identity.

AB: Through myth, and implicitly in some of your latest work, there is an overlap of temporalities, thus a collapse of linear time. How and why is this important for your work? What is its function and what should one take away from it?

CL: I think David Harvey’s Condition of Postmodernity illustrates best how our conception of space and time are social constructions forged out of vibrant and volatile social relations. Such social constructions include but are not limited to: a heteronormative sexual reproduction timeline (also defined as the age of “adulthood”); property ownership; and financially sufficient occupations meant to support family/life. These constructions reaffirm the value we assign to time based on our current capitalistic hegemonic culture.

From very early in the making, I have been interested in the (science) fictional aspect of time travel, and the sentiment of alternative timelines and spaces that this carries on.

The approach of collapsing linear temporalities is perhaps more subconsciously rooted in a queer body than in any other body. The most recent work, “The Dust Enforcer (All These Darlings Said It’s the End and Now US),” is an autobiographical narration that implies classical Greek mythology as an entry point to touch upon the intersection of otherness, including queer identity. As a person who is undergoing a transition from hormone treatment, by pulling myself away from the hetero binary, and entering the in-between space of temporalities, I understand that a queer existence is always temporal, fluid, and constantly in transit. Since the “queer use of time” (as used by Jack Halberstam), developed in opposition to the institution of family, heterosexuality, and reproduction, a transgender person is lost to history.

AB:  When I was reading about your most recent solo exhibition at Deli, in Brooklyn, NY, I noticed that some words were struck-through, both in the one of the titles of your work and in the press release. Can you tell me more about this?

CL: For me, the struck-through or crossing out of the language functions very similarly to the idea of epitaph. Epitaph is a genre of verse that is more profoundly concerned with seeing what is not there, and not seeing what is.

Crossing out is the way to erase words from the reader’s eyes but simultaneously commenting on the language as soon as the language was created. Crossing out, as a form of erasure, is almost a kind of death or closure for the act of making. It is interesting to see the language Cédric and I chose to cross out, respectively. Both extractions: “grow old to show” and “queer migrant affected by tuberculosis”, establish the erasure and the acknowledgment of linear timeline— one is a body with an aspect of linear time, another is the identity in such body–yet both belong to the past.
In the title Supposed old old age might show <grow old="" to="" show=""> what it meant the soul is made of wind instead of warm red liquid (Crossing River Styx), </grow>I choose to evidently place the word “crossing” in parenthesis for referring to the visual imagery as well as hint of the act of crossing/ crossing out language. In a way, it is a resistance to closure and using reduction as a definition as well as emphasis.

AB: Can you expand on your decision and your process of conceptualizing your exhibitions starting from such specific personal experiences? What role does vulnerability play in your work?

CL: I have always thought that one can only make work from their guts, and that this is the most direct, sincere, and honest way to translate something formless into a recognizable form. There are many reasons to make work starting from personal experiences, as there are to erase it. My choice of making is not merely a guttural vomit of emotions but also a method of processing them. And this processing is against forgetting; against being forgotten.

The personal experiences that I drew from were recent, major incidents in my life regarding the treatment of illness, the immigration process, and the navigation of finding the body in which I felt at home. For this exhibition, I endured intensive labors that condensed several layers of material translation in each work. And perhaps this was a naïve choice for the sake of my own sanity but it felt truthful and grounding with the careful calibration of imprudence and masochism.

Vulnerability, to me, is almost equated to complete honesty, a hyper externalization of internal thoughts. To be honest, is to be vulnerable.

AB: Can you tell me more about the way in which you use poetic language? When does the process of writing intervene in your practice?

CL:  Reading is the thread. Through reading the idea forms with intentionality, and language emerges as part of the sculpting tool and framing device. I think poetic language opens up the possibility for interpretations and creates rooms to wander and contemplate; it contains presence and absence. Writing for me is very similar to sculpting; for instance, you vomit a big chunk of emotions, and then you start to shave it down to a recognizable form.

I start each body of work with intensive reading, which leads to writing, and writing further leads to the desire to shape the formlessness into sculptures. An entire body of work is born this way. After I finish a body of work, I always go back to writing. I would spend hours writing about each piece, measure its virtue, and extract titles. Even if it always takes longer than I anticipate, and even if I didn’t have the resources to learn how to write well, it has always been a preoccupation of mine.

AB: Looking at some of your past work, I encountered this idea of “the body as a home for language”. Could you tell me more about that?

CL:  The body is a way to solidify the formlessness, which is emotions, language, and narratology. While mythology (as a form of narratology) functions as an abstract machine, it is fundamental for me to go back to the body as a grounding device.
Like John Berger says in Confabulations: "A spoken language is a body, a living creature, whose physiognomy is verbal and whose visceral functions are linguistic. And this creature's home is the inarticulate as well as the articulate." The desire to recognize the memory errors or gaps in history, is also the desire to actualize them in physical forms. Often, for me, desire and suffering are inexorably linked, as fear and freedom; they are rooted in the aspect that it is also coming from a body.

Cole Lu: The Temple of Sleep