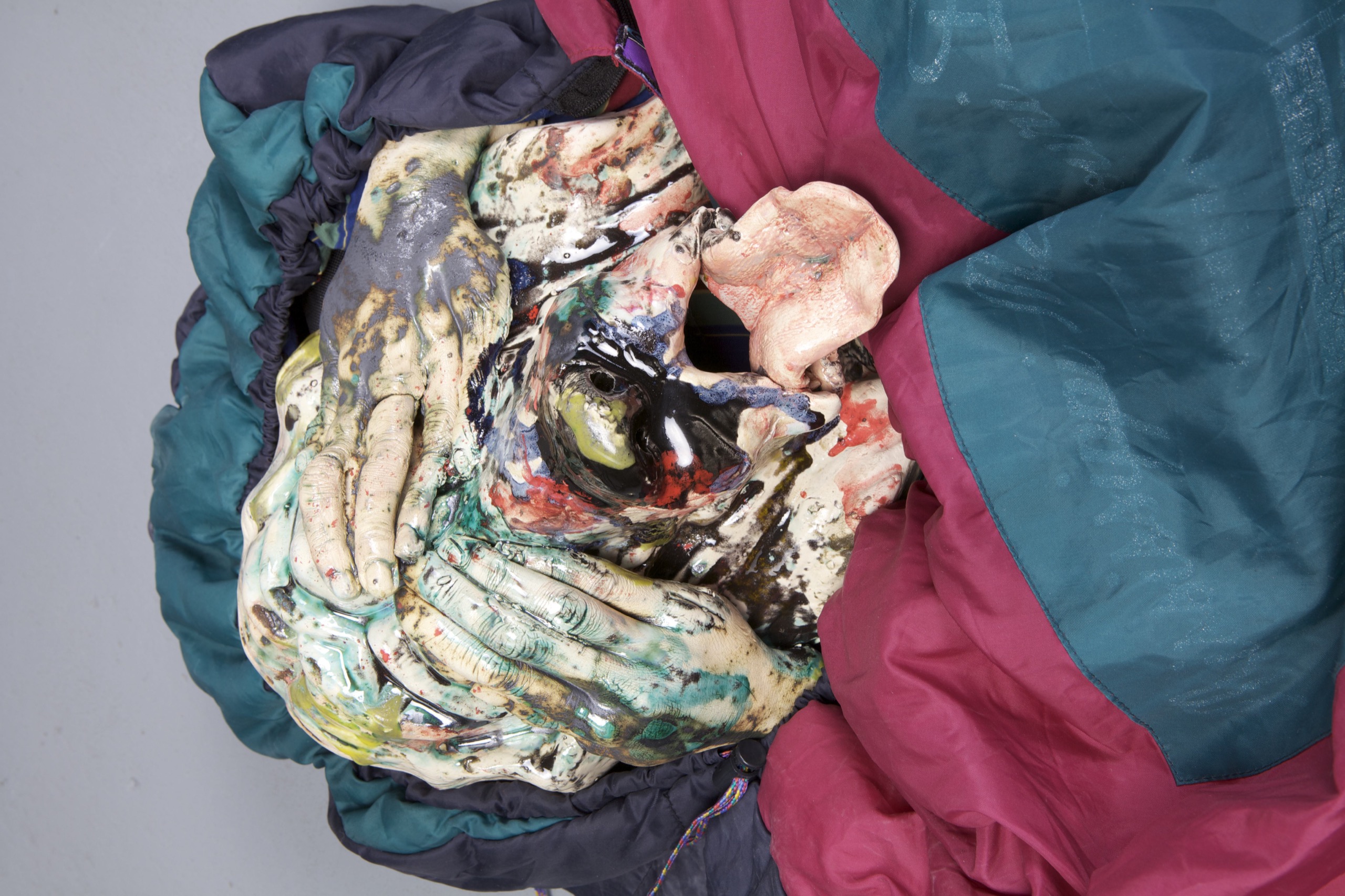 Kris Lemsalu talks about why she switched fashion for contemporary art. She reveals how attending a secret party in Estonia further sparked her interest in costume making and performance, and how traveling informs her work. Now, as a skilled ceramicist, Kris knows her materials intimately and integrates both sculptural elements and performative acts in her installations, to map the world around her as a semi-fictional ground and to create what she likes to call “a personal newspaper”.

Kris Lemsalu, born 1985, Tallinn, is a contemporary artist based in Tallinn, Estonia, and Vienna, Austria.

Living  Content       You grew up in Tallinn, went to school in Denmark and Vienna, and now you live in Berlin. Do you feel that Estonia has had a particular influence on your practice?

Kris Lemsalu      I think that a lot of the materials that I use can be traced back to my childhood but I really don’t read these roots as directly connected to Estonia. For instance, I spent a lot of time in the countryside, milking cows and stuff like that, so I have this direct experience with nature and animals. It’s a difficult question. To get to the core of this Freudian response you'd have to invite me to lie down on his couch and dig into my childhood memories...

LC       Oh no, no (laughing). We don’t want to get into Psychoanalysis. But tell me a bit about how you got into making art.

KL       I’ve never been into the idea of studying art. Initially, it was more about deciding where I want to be. I studied ceramics first in the Academy, in Estonia, and after that I moved to Copenhagen, where I continued with ceramics, although it was more of a design faculty. And after Denmark, I went back to Estonia and finally to Vienna where I spent six or seven years, traveling on and off.

LC       Interesting that you didn’t want to study art initially. How did you get into ceramics in the first place then?

KL       I was taking ceramic classes as a teenager for five or six years while also doing fashion. I even had a little company. Estonia is a small country and if you do something, it’s really easy to shine and be noticed. I had a lot of support in that sense. So, everything was going well and then the time came when I had to choose what to study further. It could’ve been fashion but I found that the fashion world was a little bit flat for me. So I decided to study ceramics because I missed the physical feeling of making things. That was it! I knew the material, I was already quite hands-on with it, so it was a straightforward decision.

LC       The way you’re talking about making objects with your own hands, seems to be very gratifying. Just looking at your work I can imagine that it must have taken you years to understand the materials you are working with and to learn their reactions. There has been a lot of interest recently in craft and ceramics in contemporary art. Do you intend to address skill in your practice at all?

KL         When I was studying sculpture in Vienna I actually wanted to get rid of the material. To do a mini protest. But after a while, I somehow understood my material in more depth and it captivated me. For me, it’s very personal: I learned to know my materials very well, I know the techniques and now I can play around. I don’t really question or address technical skill in a larger sense. It is just a tool to get where I want to go and to express what I desire to express.

But it’s true: I do see a lot of contemporary artists working with ceramic and I see how the work becomes more about fetishizing the material rather than using it as a tool or a skill.

A lot of works are now stopping in this kind of ‘oh, I can build this and then I can glaze it and it looks shiny’. The idea is secondary to the fascination with the material.But it also makes me happy to see that ceramics is coming out of this handy craft or pottery.

‍LC       The animals that keep reappearing as characters in your work seem to be caught somewhere between abstraction and figuration. Can you tell me a bit about your work process and how these characters come to life?

KL       Most of the time I’m traveling and this also means that I am observing and taking notes of everything I see and visit. So I’m working all the time. I’m not really experimenting and fiddling around in the studio. I know what I’m doing: I have a visual image in my head before starting the work, then follows the execution. I know the material so well that I can work it after that image in my head. And after I’m done with that, I’m writing down for myself how it came about. I’m finding out more by writing about it after, by gaining a bit of distance. I want my work to have direct experience with the viewer, something that you feel in your stomach. Of course, there is not a single narrative in these works; there are many stories and many experiences that overlap. I want to leave a certain openness to these experiences. For some people, the works may seem funny or humorous and that’s very good. For others, who step closer, a slightly darker side, or a more complex narrative, appears. I really want the viewers to have these different relationships with the works, so they can find their own path through them.

LC       So how do your performances relate to the objects you are making?

KL       Well, with the performances it’s funny because when I was in high school I started to create costumes and different characters - just as a mode of expressing myself and breaking down the boredom of fixed systems around me. There was a rave I went to every month, organized in different warehouses and they always had a dress code. This dress code was a starting point for me to make these costumes because with the costumes I could enter a special room in the rave that was always curated by an artist, an actor or other creative people. It was really like an Estonian Studio 54 party. There were always super crazy things happening: bondage shows, fashion shows, weird events. It was quite a scene for almost two years. So, as I said, I started doing costumes for this event and even after this, I kept on doing costumes for fun. At some point, in Vienna, somebody asked me to do a performance. At that point, I never considered performing. So it was really by accident that I entered this performance life.

I worked a lot at the beginning with an artist group from Vienna. With them it was always a Viennese Actionism style- performance: going wild on stage, with costumes, body fluids, and so on. Now, I’m using performance in my own practice because I feel that some of my works need my presence to keep on living, or even for them to have their own life in the first place. Most of the performances that I make consist of me being inside the object, motionless, for hours. It’s more like a baptism or something like this.

LC       It’s very interesting that the performances are inlaid in the physical work. For the work Car2Go from 2016, that you presented at Guido W. Baudach gallery in Berlin, you also prepared a very sensual performance. I was reading that the brick-men holding the yellow umbrellas were a reference to the UmbrellaMovement in China. Can you tell me more about how this political reference came about?

KL       There is no separation between my work and my life. That means that when I’m traveling, I’m unconsciously absorbing what is happening around me. For example, the project you mentioned came from one rather bizarre event altogether. I was in Sri Lanka, where people drive like crazy on the streets, and while everybody was in this hectic atmosphere, I suddenly saw this car driving really, really slowly, with a family walking behind it. And I realized that it was a funeral march.

These are the types of events that I see and they start to linger in my head. I can’t get rid of them somehow. But of course, that’s not the only way to translate the work. This is built up with many other layered stories. So I would say that Car2Go came up after half of year after seeing that. Let's say that it is my own personal newsletter.

‍LC       So what’s next for you? Do you have any projects coming up or recent projects you did that you’re particularly excited about?

KL       I just did a large installation for Frieze in October, and a performance before the opening of the fair: that was fun. I made this performance with five other people - the first time I collaborated with people in this way - so I was completely open for it to be beautiful or a complete disaster! I worked with four lookalikes of celebrities: Prince, David Bowie, and George Michael. The performance was about the immortality of characters that are bigger than life. Ah, and I also have a five-month residency planned in Mexico City, which I’m really looking forward to.