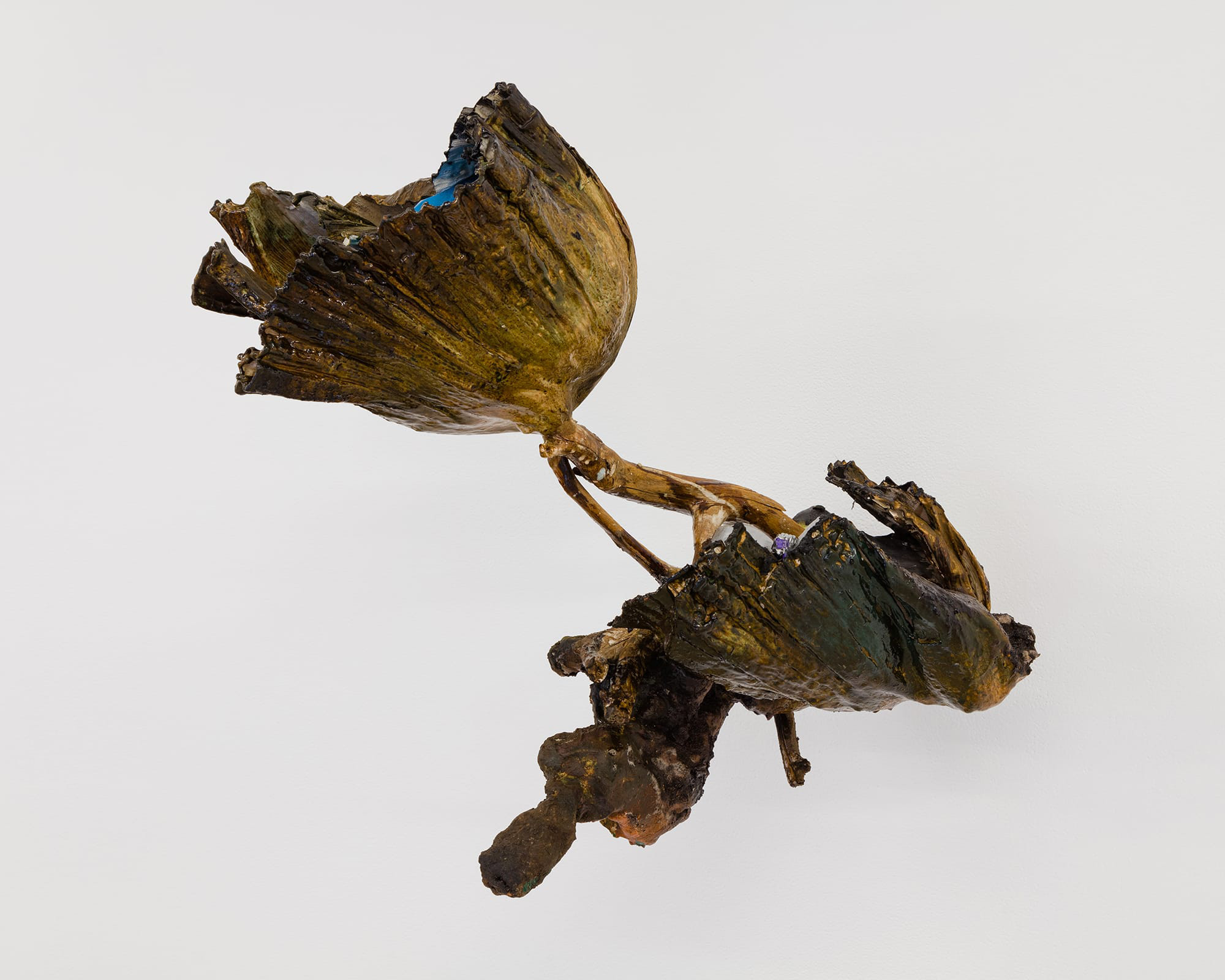 Brandon Ndife’s practice exposes an underbelly; those accumulations of decay left to grow out of sight. There are still legible forms to be named in the ooze, and in the balancing of a pre-disaster precarity and a post-disaster rebirth. After a requisite consideration of the current reality caused by the virus, we discuss how Brandon's practice changed after Hurricane Sandy, about abandoned relics, and about the tactile quality of cheap furniture versus expensive heirlooms. 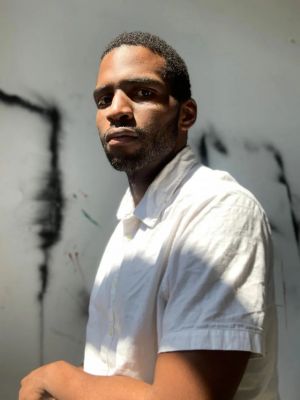 Brandon Ndife (b. 1991 Hammond, IN) lives and works in Jersey City, NJ. He received a BFA from The Cooper Union and an MFA from Bard College. Some of his most recent solo and two-person exhibitions include: MY ZONE, Bureau, New York; Minor twin worlds with Diane Severin Nguyen, Bureau, New York; Ties That Bind, Shoot the Lobster, New York; Just Passin’ Thru, Interstate Projects, Brooklyn; Meanderthal, Species, Atlanta.

‍Brian Paul: The opening of your second show at Bureau, MY ZONE, would have been on March 20th, but it was, of course, postponed (and the show has been extended until August). Many themes in this work feel apt. These objects are on the horizon of time—just out of reach, just before or just after the collapse—a “charged waiting,” to quote a phrase you used in our discussion. As the show’s initial run times out, how do you feel it’s been received?

Brandon Ndife:  It might be that the works’ context is heightened ironically because the show has been shuttered due to forces beyond our control. Thanks to the virus, I have had even more time to reflect on how I personally fall into the systems that be. This period has been a prime example of how a wrench thrown deep into the machine can bring a complex equation to a screeching halt. And that’s shown in the experience of each individual, from an everyday person, all the way up to the leader of the country. We haven’t seen anything of this magnitude before. Inside our homes, we all exist in this “charged waiting.” My feelings around the situation are very mercurial. On the one hand, the show has brought about amazing conversations with other artists on the importance of art in times of crisis; while on the other, we all reckon with the precarity and the unsettling unknowns of the near future. I have been holding these feelings in tandem since the show, and definitely will for a long time.

BP: You’ve said that, in approaching sculpture after a long time working as a painter, you enjoy that making sculpture feels faster. In what way, then, does temporality fit into your work?

BN: I'll always consider part of my practice with painting in mind. It is part of studying color and how it’s engaging with the built world. For me, the transition from the canvas made sense because using sculpture in this way, fulfilled the need to engage with the things outside the studio.

I wanted a relationship to what I was thinking about outside of the studio. What to make of the objects we open, use, and discard—the things that we hold near to us in particular? I think that painting was just a little bit too far away from me to answer these questions. Reckoning with my own past and my own possessions, I really wanted to have these separate urges, painting and sculpture, completely unified. So that marked my transition to sculpture, about a decade ago. I’ve been trying to complicate the histories of found objects and postmodern reflexes in sculpture.

I was in my undergrad years when Hurricane Sandy hit New York, in 2012, and from then on, I was intrigued by this concept of temporality. Other ideas that I was thinking about during school involved researching and writing about natural disasters and their aftermath. I'm really interested in the way systems kind of break down over time, how the structures that hold up our daily lives fall apart when there is a panic. For a certain number of us in this country, that sort of collapse is omnipresent, and security is held by very loose threads. Impending collapse isn't so far-fetched. It's something that is experienced continuously, and I want to highlight that imagery. But I also want to highlight that the objects are only legible to certain groups and not others, that there is a discomfort in encountering them and a kind of privilege of knowing whether or not these things can harm you.

BP: Your first show at Bureau with Diane Severin Nguyen, Minor twin worlds, involved ubiquitous pieces of particle-board “Walmart” furniture, whereas this show makes use of bespoke cabinets and heirlooms. How do you relate to these ideas of legibility and abundance?

BN: I wanted all the pieces in the show to be made by hand but based on real pieces. That idea came from wanting to take a walk psychically through my own house and my own memories of a typical middle-class suburban house. Earlier in my practice, I was a bit hesitant to inject my history into the work, but then I began to see that including those aspects of myself is not as invasive as I once thought. I found that my experience is one shared with many. I also began expanding on associations with materials in this body of work. For example, wood evokes something a bit older, an heirloom or something passed down, versus a quickly made, cheaper, lighter material that may or may not suffice for completing a home. I'm still figuring out what each material means for me and my own upbringing and how much of my biography I want to bring into the work.

BP: Elsewhere, you wrote about your use of ready-mades as vessels: “[...] the ‘generic,’ a term that in my life I knew as slang, not far from ‘ghetto,’ ‘janky,’ ‘basic.’ A simple way to understand being of lesser means is taking what is given.” I’m curious about this. Two opposing ideas are contained within this concept of “making do.” It expresses a kind of abundance mindset—“I have enough, I have what I need” (anti-consumerist mantra vibes)—but at the same time papers over an explicit lack.  When we spoke, we discussed desire, specifically ideas of taste, and how these might be frustrated by the illegibility of certain forms in your work. Can you expand on these ideas?

BN: There is a specific rift in the particular quality of things between classes. You can experience the gap by touch, by weight. The difference of physical properties between objects is a simple distinction of quality, which in turn dictates their value. While it’s a seemingly harmless consideration, taste often becomes exclusionary—classist, even. Despite many decisions being influenced by “taste,” choice is only a factor when all other essential necessities are fulfilled. Furthermore, globalism has rendered diversity across so many facets of life (cuisine, art, design, languages) relatively homogenous. With so much available at our fingertips, a single country’s natural resources can become entirely dedicated to meeting the demands and appetites of Western economies. This is nothing new, but I am still fascinated by it. For the less fortunate in our country (a wide swath of Americans), governmental programs, like Section 8 housing, SNAP benefits and other structures, dictate taste, and I wonder how we can make meaning from that position. These considerations ground my interest in cheaper materials.
There is a certain amount of ambiguity with the forms I use, and that maybe comes from privileging only a certain population that encounters my work. The recognizable forms in my work are subdued when their contexts and identities are juxtaposed against more familiar objects, performing a sort of “code-switch.” Refraining from clearly laying bare the context and formal specificity of an object can itself be seen as a material, maybe. For me, it’s a small action to acknowledge the influences and violent history of global colonialism in the objects that I create.

BP: One theme that comes up when you speak about your practice is the idea of the reliquary. In a way, you’re alluding to Paul Thek’s Technological Reliquaries series, through which he recreated Christian reliquaries that contained the remains of saints by placing realistic mimicries of severed body parts into colorful fiberglass boxes. What’s inside your vessels, however, is linked less directly to the human body and is more an accumulation of material speculations on impending collapse.

‍‍‍B‍N: Right, rather than explicitly representing the body in my work, I try to focus on the structures that maintain and organize our daily lives. Smaller, quotidian objects, like kitchen cabinets, tables, and sinks, function as places for reflection, containers for nourishment which become analogous to other people inhabiting our homes with us. Like Thek, I'm interested in the aura of relics, spaces, and objects that can tell stories of another time and place but also, when provided with a certain level of understanding, can be food for thought. But apart from Thek’s highly detailed series of severed body parts you mentioned, I do not think of my work as being so tied to religious associations. The word “relic” usually has religious connotations, but it can also be substituted with “artifact” or “remnant.” The contents within the sculptures are “relics of the present,” objects that recently have lost any usage or importance. The over-ripened landscapes in my work stand in for that feeling of abandonment. Melding together modest structures and materials, juxtaposed with wild forms of overgrowth, I illustrate that abandonment.

BP: Can you expand on that?

BN: Sure. Perhaps this idea can be better understood discussing other artists I am looking at. When thinking about psychological space in relation to the everyday, I reach for names like Louise Bourgeois, [Paul] Thek, [Robert] Gober, and members of the Arte Povera movement. Their work is intensely personal and charged, especially when everyday objects are anthropomorphized and turned into colossal manifestations of phobias and traumas—generally, through a subtle change in the inherent associations of common activities and objects. Gober’s sinks and his obsession with cleanliness in the age of the AIDS epidemic, the Povera movement’s concerns with the sublime transformation of nature, Bourgeois’ use of biology, and the unconscious—all expand on the idea of sculpture as a site of internal reflection. These artists provide for me this liminal space: an internal “psycho-locus,” as Gordon Matta-Clark put it, a practice focused on the mind and body. There is also a strong sense of precarity and temporality in their work, oftentimes including objects that will disappear or annihilate the work completely if maintenance is not performed to renew it. A lot of my peers follow these trains of thought as well: Diane Severin Nguyen, Anicka Yi, Kevin Beasley, Michael E. Smith, and other titans such as Tetsumi Kudo, Robert Rauschenberg, David Hammons, Peter Buggenhout and Doris Salcedo. All are mainstays in my studio and have been for years. This group provides the fodder for my interests in how the body, the organic, and the man-made all collapse into one another.