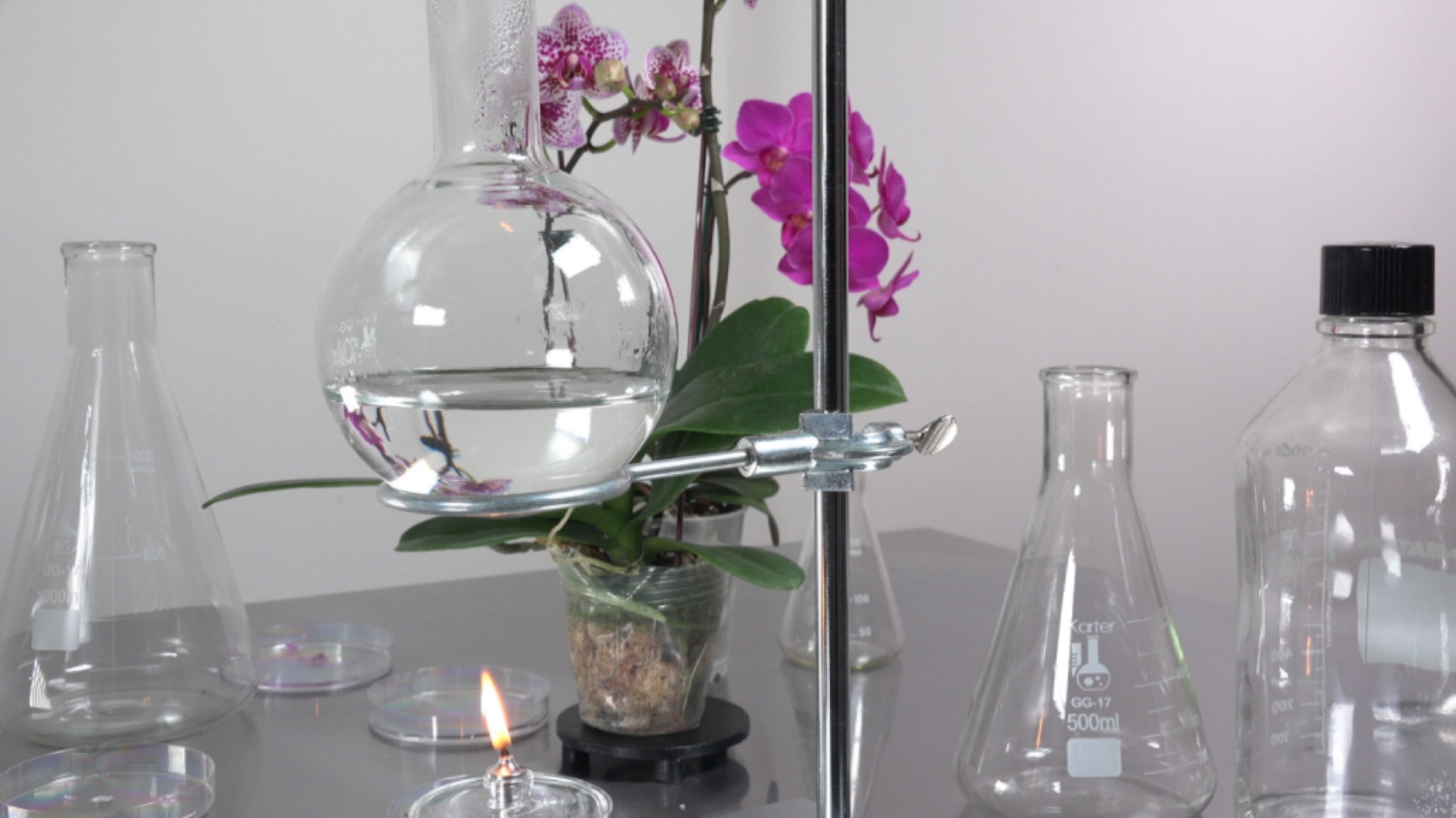 Anicka Yi talks to Adriana Blidaru of Living Content about the paradox of advancing ideas that include change, loss, and deterioration, in the context of an art world that finds value through conservation. She also reflects on the implications of prioritizing vision over other human senses and how this is especially prevalent in Western cultures. They discuss the processes behind Yi's exhi­bition-making and the important role that writing has had in her practice. Furthermore, the artist announces her upcoming fragrance line called 'Biography', inspired by the multiple personalities of an imagined Al entity.

Anicka Yi was born in 1971 in Seoul, South Korea, and lives and works in New York City.

Adriana Blidaru:  You don't have the traditional art background that most artists have. What were you doing before you started making art? And what have been some of the major influences that have shaped your practice into what it is today?

Anicka  Yi:  I started art later in life. I didn't go to art school. My goal in life was to drift freely, to drop out and live the opposite of a credentialed existence. I survived by working occasional jobs as a fashion stylist and copywriter, but it was an excruciating way to live. It's not for everybody. You have to have an incredible amount of fortitude. The world we live in is so obsessed with vocation, especially in New York, and if you don't have the right business card, you're rendered invisible. Superfluous. For a really long time, I felt lonely and alienated.

Over the years, I've become more influenced by chemically-based disciplines outside of art, the experimental practices of cuisine, biology, and perfumery. I've stated before that the most radical artistic statements are being made in the world of cuisine. Cuisine combines the study of chemistry and micro­ biology with performance, sculpture, and painting. It has everything. It's uncharted territory for art and it's ephemeral and mutually transformative. When you consume something, both yourself and what you consume are chemically altered. Smell works in the same way - it can prompt a transfer­ence of environment, of time, of memory.

I'm especially fascinated by the invisible power that microbial life holds over our own. My interest in microbes and their domination of us and the planet has influenced my way of being. Microbes were the only life form on Earth for 3.5 billion years and they produced the biosphere on which all life is contingent. They produce the oxygen we breathe. As animals we live in the world, but the fabric of that world is essentially bacterial.

AB: Loss, death, and entropy have been essential concepts in your practice that often reflect in the material choices you make. Can you tell me more about the relationship between vulnerability and monumentality in your work?

AY: I focused on these themes in my exhibition trilogy: "Denial", "Divorce", and finally, "Death," and I've written about how these three exhibitions were my way to explore the forensics of loss and longing.

For these shows, I utilized the sculptural vocabulary I had developed over the past five to six years, which incorporated elements of perishability, transparency, and embedded­ness.

Monumentality is inherently tied in with vulnerability because the whole of life, including that of the human, is subject to natural processes of decaying and blooming. Change is simultaneously a process of life and one of death. This is happening on a grand scale at all times. Natural processes are unpredictable and uncontrollable and we are at their mercy. No matter how much we try to resist, nature and biology always win. Humans have to grapple with the precarious­ ness of our own lives, our grief and sorrow and their accompanying chemical residues and stench.

Many of my works use this element of deterioration, which becomes especially interesting in the context of the art world where everything is meant to be preserved. I'm interested in works that always escape somehow, either by overgrowing their confines, mutating or disintegrating. In the context of biology, there are many ways to look at loss as a process of change.

AB: I was reading about your research on different cultures that have a complex vocabulary for different smells. In Western countries we have a very limited vocabulary when it comes to describing smells; we often describe them through associations. Even more interestingly, our brain creates strong personal associations between smells and memories. Through this type of research, your practice has been mapping out new territories in the art world. Can you tell me more about how you see your work challenging our established cultural and economic values?

AY: I always look for a way to reorder the senses. In the West we are overly dominated by the ocular sense. Everything is focused on the visual and our eyes are constantly strained, pushed to the limits of fatigue. I go online and I can't see anything anymore, I feel like I'm drowning in images. I believe we've lost our empathic core because we've neglected these other senses. Smell, touch, and taste offer alternative ways of knowing the world. We've lost these alternative realms of wisdom and intellect by privileging and prioritizing one sense above all the others.

We are especially repressed when it comes to the sense of smell and we usually equate power with the absence of smell. Eyesight and vision are associated with knowledge, discovery, power and the masculine, while smell is shrouded in mystery and subjec­tivity. Smell is our most ancient sense and it ties directly in with long-term memory.

However, if you think about powerful political figures, you almost never think about a smell.

Smell indicates the human body and all of its necessary care and vulnerabilities. In contrast, we expect elite spaces related to finance, banking, government, and high-end retail to have no aroma whatsoever - these are antiseptic, non-smelling places.

The smells that we do embrace are completely structured around the culture of perfume and its tacky, unimaginative tropes: the fashion house, the actor, the pop star, the athlete. They all promote these worn-out aspirational lifestyles. After millennia of human beings exchanging microbes, oils, and fragrances, it disappoints me that the perfume industry is limited to such a simplistic set of narratives. My work gives me the chance to create odors that are complex, pungent and not necessarily pleasant. These are not aspirational smells. They tell a different story.

AB: On a practical level, what have been some of the challenges of creating conceptual scents?

AY: I do not have formal training as a perfumer, but I've developed olfactory sensitivity simply through my own will and desire. From working with perfumers who have a knowledge of chemistry and a strong command of notes and scents, I've learned strategies to expand my own olfactory perception. I don't avoid unpleasant smells. I go on smelling journeys. When something smells strong, I don't reject it. I resist my initial reaction and spend some time with the smell to take in its subtlety. I may have had some initial talent in the realm of smell, but I've really had to cultivate and practice it. So much of who we are is made through sheer discipline.

I also tend to like extreme scents. But it's a hard area to be experimental, because people won't wear unfamiliar smells. That says a lot about our society and our preoccupations with cleanliness and hygiene. We restrict ourselves to the idea of polite smell, which has everything to do with social constructs around smell and power relations. What if our olfactory styles were as developed as our way of dress? People are afraid to smell strange.

There is an avant-garde perfume world, but these perfumers have a hard time reaching an audience with their work. It's a problem that we refer to smells only as good or bad. We don't have a sophisticated language around it and our palate is very limited.

AB: I'm also curious to find out more about the way in which you construct exhibitions­ which read for me as sets for the interaction of different agents. What is your starting point, how do you conduct your research, and what is then the process of 'translating' your ideas into objects?

AY: Exhibitions are all about the narrative for me. I can't make an exhibition without having the narrative first. I don't work in a hermetic, formalist way - I want to create a story and share it with others. Writing is one of my primary tools and it helps me develop my thoughts about my own work. Syntax, sentence structure, metaphor - all of these devices are indispensable. For each set of sculptures, I write a backstory as if they were characters in a novel or screenplay. I don't share this writing with many people-only those closest to me. I'm not really a visual person, so I don't think in images. I don't sketch and I don't use visual references very often. It can definitely be an obstacle to communication. My starting point is always verbal. From there I go into a phase of intense prototyping and experimentation. I loosely sample scientific procedure in my work and I methodically investigate organic and living materials. I also reach out to scientists and specialists who can help me realize the worlds I develop in my writing. To use a term coined by Caroline Jones, a scholar at the Massachusetts Institute of Technology, my work is bio-fiction. I want to fuse the writing of life - the notion that all living things have their own stories, contexts, perspectives, and histories - with the study of life, which also now includes an embrace of nonhuman perspectives.

AB: And another question, also from a practical perspective: what have been the challenges of institutions and collectors acquiring and preserving your artworks?

AY: Well, first there is the issue of smell. For several of my installations, deodorizing has been a challenge for the curators and staff. Some attendees at my shows have left in disgust when confronted with heady and unpleasant odors. There's also a preoccu­pation and anxiety around the possibility of contamination. I don't work with materials that are particularly dangerous, but as soon as people encounter a forceful smell, the fear of infection and pollution is there.

I've also had to collaborate with scientists out of sheer necessity. A lot of the material I work with, like glycerin soap and fried flowers, is challenging to stabilize. Early in my career, I started soliciting chemists and chemical engineers to get some advice on how to work with materials that are highly reactive and do not mix well with one another. For the most part I was ignored, until I completed my residency at MIT. That residency really opened the gates for me and gave me the opportunity to develop relationships with top researchers and scientists. At that point, the biological side of my work started to become more tangible. Researchers and conservators are needed to assess my work and develop strategies to maintain it.

AB: And what are you working on at the moment? Any exciting upcoming shows or projects on the horizon?

AY: Yes, I have many exciting projects on the horizon. Creating my first fragrance line is something that has been in the works for a number of years and it is finally coming to fruition. Biography will available at Dover Street Market in New York next year. It is a set of three fragrances developed with French perfumer Barnabe Fillion and inspired by three personalities spanning from the past to the future - Hatshepsut, Fusako Shigenobu, and Terra lncognita, an imagined Al entity. I also have an upcoming public art project with the Philadelphia Contem­porary Art Museum and Philadelphia Zoo and exhibitions at Aspen Art Museum and Fondation Galeries Lafayette.