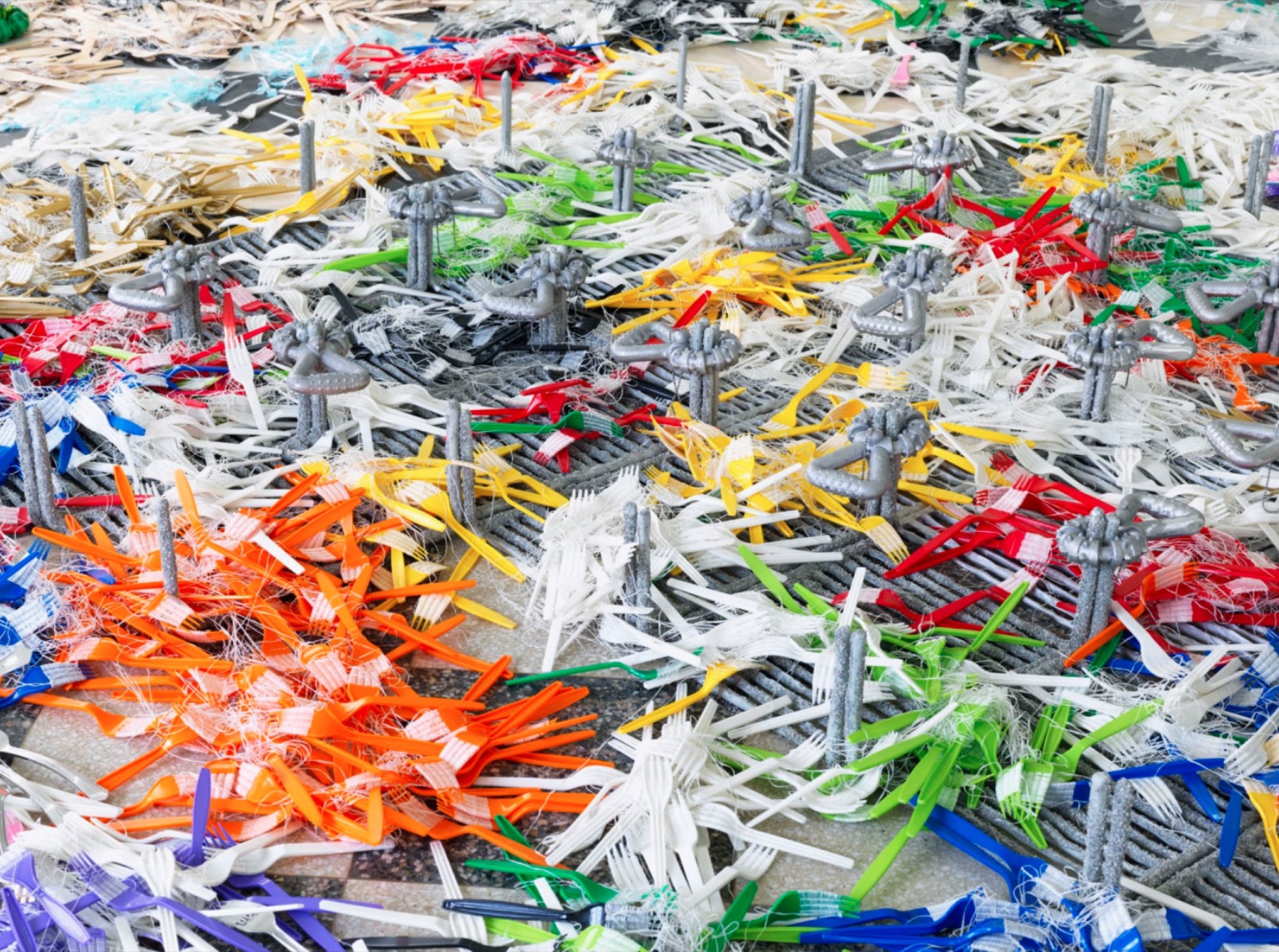 Nancy Lupo describes how her artworks stem from her incentive to search for the unusual in the most banal objects and materials, combining them intuitively in order to create new means of perception and interpretation. Some materials, like the Rubbermaid Brute containers, a specific brand of cat litter, or epoxy clay, reappear quite often in Nancy’s practice. Slightly modified or merged through repetition, these elements form an alien landscape expanding in the exhibition space. Nancy explains where the poetics and the references embedded in these objects intersect. She also offers a sneak peek of her upcoming contribution to the “Made in L.A.” biennial exhibition, opening in early June at the Hammer Museum.

Nancy Lupo was born in 1983, in Flagstaff, Arizona, and currently lives and works in Los Angeles.

Adriana Blidaru: Can you tell me a little bit about where you grew up? I wonder how growing up in the desert has influenced your work.

Nancy Lupo: I grew up in Flagstaff, Arizona, which is the high desert at about 7000 feet. The atmosphere at that elevation makes your body work harder just to breathe. For this reason, Olympic and other high-performance athletes go there to train because once you get back down to sea level, everything is easier. When I was in high school, there was a vote to designate Flagstaff as the first “dark skies” city, which means they have different kinds of regulations about outdoor lighting so as to cut down on light pollution for Lowell Observatory (famous for being where the former planet Pluto was discovered). So in a literal sense, Flagstaff is very, very dark at night, and you see all of these stars that you forget are there when you live in a city. But there is also a non-literal darkness or sadness that you feel in Flagstaff; it is deeply embedded into the land.

AB: How did you become interested in making art?

NL: There are a lot of things that I think about in my work now that probably germinated in Flagstaff. I decided I wanted to be an artist in middle school after getting in trouble with drugs. I needed a goal in order to get out of Dodge, and art, it seemed, was powerful in a way like drugs. I didn’t know what an artist was, exactly, but basically it seemed like the definition was up for grabs. I liked to take pictures of people I was interested in, drive around the desert, and write plays. I think I wanted to be a filmmaker.

AB: Your exhibitions are basically spaces of ontological confusion: you take overlooked objects and abstract their meaning and functionality by de-contextualizing them completely. How do you want viewers to experience the spaces you create? What are you hoping to highlight through this de-familiarization? And why is this important?

NL: There is a line in Chris Marker’s Sans Soleil where the voice-over says something about tracking banalities with the relentlessness of a bounty hunter. I think the activity I engage in as an artist involves a similar kind of vigilance. My gaze is directed towards things that are visible and real but somehow don’t really register in the forefront of consciousness. I think about it this way: if a hallucination is where you see something that isn’t there, then an anti-hallucination would be where you don’t see something that is there. And so I find my work situated in between these zones of the hallucination and the anti-hallucination.

AB: I would love to hear more about your working process. What is your starting point in working on an exhibition?

NL: There is an ongoing script and certain recurring protagonists that hold space or are space themselves. Rubbermaid Brute containers are obviously ongoing and very pervasive, as are park benches, The World’s Best Cat Litter, all manner of feeding dishes, and dental floss. Sometimes they are flush with life, sometimes they are pictures, sometimes they are spoken, and sometimes they are written out as a shopping list, materials list or ingredients list. There are also voices: of friends, in movies (especially voice-over narration), people I transact with in the production of certain elements or as interlocutors for the work. I write a lot of specific terms, but the whole thing is also very vulnerable, requires care and is subject to the rules of gravity.

‍AB: How do you arrive at combining such a diverse range of materials?

NL: It’s about what something does, what it’s called, what that word signifies, how it feels in your mouth when saying it, or how it kind of sits in your subconscious mind. Sometimes I’ll choose something just for the purpose of problem-solving, but then one thing leads to another and a certain logical absurdity is achieved. For example, if you start with Magic-Smooth, which is a two-part epoxy clay used for taxidermy or other various craft purposes, then you can think about “magic” in the marketing and appeal of contemporary products. Add in “Model Magic” and “Magic Eraser,” and you can start to get a bigger picture.

AB: Tell me a bit about Sailing to Byzantium by William Butler Yeats. Why did you choose this poem as the press release for your solo show at Antenna Space in Shanghai?

NL: In the same way that physical objects alter the trajectory of bodies in space, language also has the ability to shift energy and punctuate time. No Country For Old Men probably first recalls the Coen Brothers film of the same title that won Best Picture at the Oscars in 2007. I was interested in using a piece of language from that year that could have a shuttle effect and immediately take you back. That phrase was particularly interesting because it came back again in 2017 at the Women’s March, where people had it on banners and t-shirts and it was being deployed in a very literal and concrete way. Tracing it back to its origin, it comes from Yeats’ poem “Sailing to Byzantium,” which is about aging or time passing, and the relationship of hard matter or bone to flesh or what passes around and in-between it.

AB: What are you presenting at the Hammer Museum biennial this summer?

NL: I will be presenting four works involving park benches that I have produced one per year since 2015. It will be interesting to see them together because they were each conceived of in relationship to a specific context and entangled with specific other places. I think I always had it somewhere in my mind that one day I could have something that was like a park, or a graveyard, or a prop house. Bench 2016, which was originally exhibited inside of a white Dodge Caravan that was parked in the Hollywood Hills, will be restaged in this location for the duration of the exhibition.

There is also a new work called in Medias Res, which is the second work I have made that concerns this public sculpture The Sphere by Franz Koenig that was originally located at the World Trade Center Plaza. It was badly damaged on 9/11 but did survive and has since been relocated to Liberty Plaza. According to Wikipedia, “The artwork was meant to symbolize world peace through world trade, and was placed at the center of a ring of fountains and other decorative touches designed by WTC architect Minoru Yamasaki to mimic the Grand Mosque of Mecca, Masjid al-Haram, in which The Sphere stood at the place of the Kaaba.”

AB: And if there is something that you would recommend for people to watch or read to better understand your work, what would that be?

NL: In thinking through the way that inner life intersects with outer life and public space, Lauren Berlant’s work on “public feelings,” especially in the first chapter of her book Cruel Optimism, and Ann Cvetkovich’s Depression: A Public Feeling have been illuminating. Samuel Delany’s Dhalgren, James Merrill’s The Changing Light at Sandover and Gertrude Stein’s Tender Buttons have all been longtime companions.