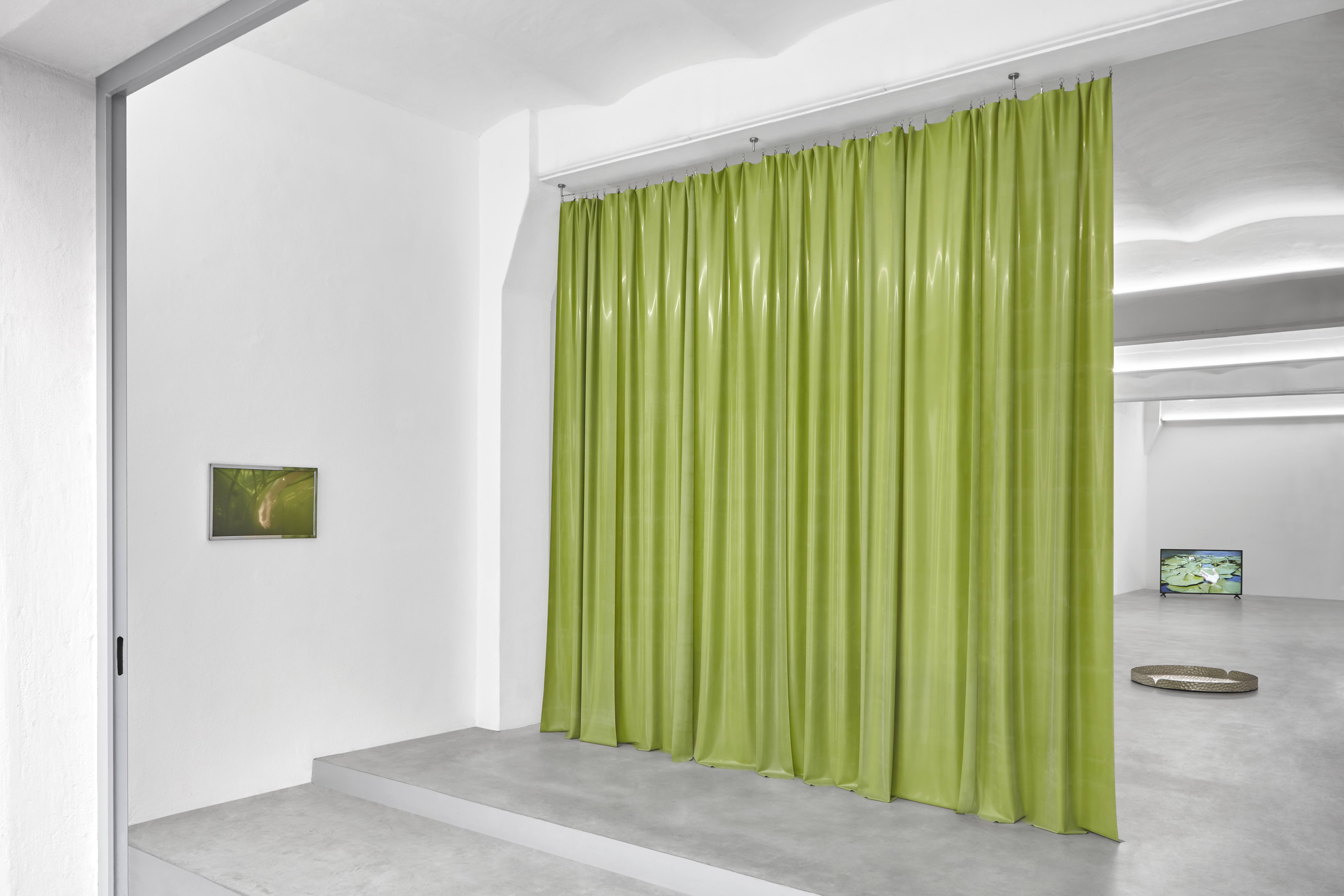 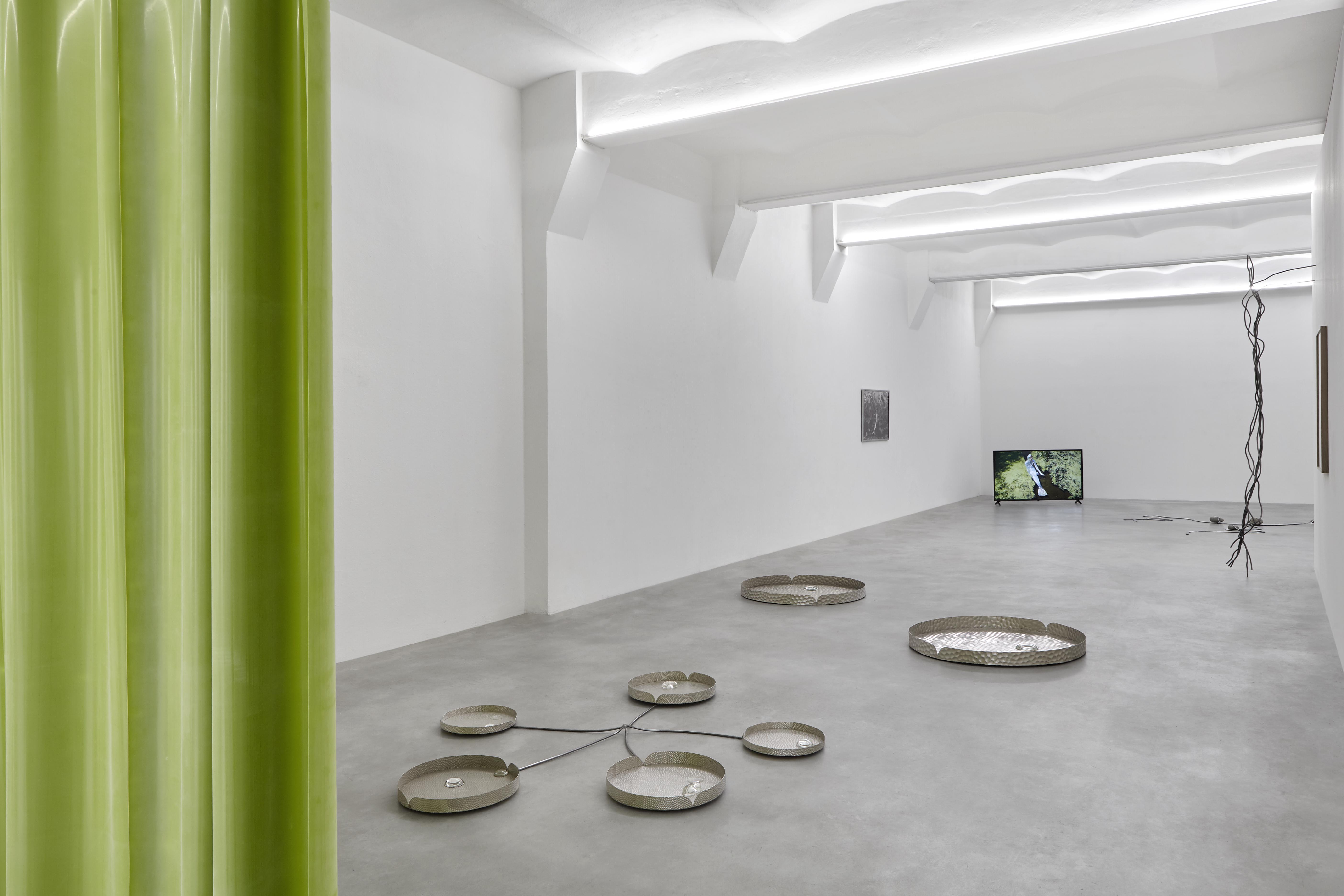 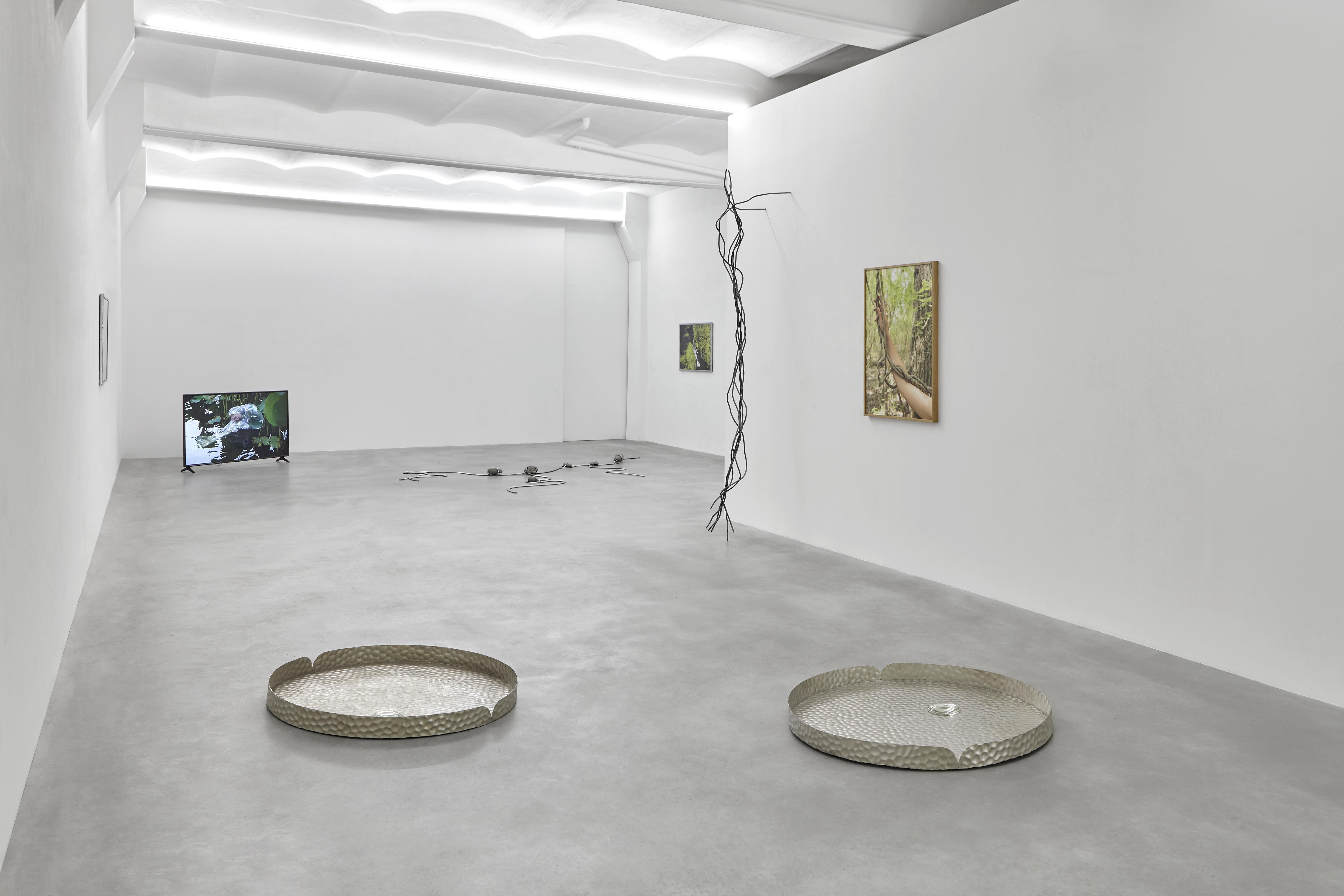 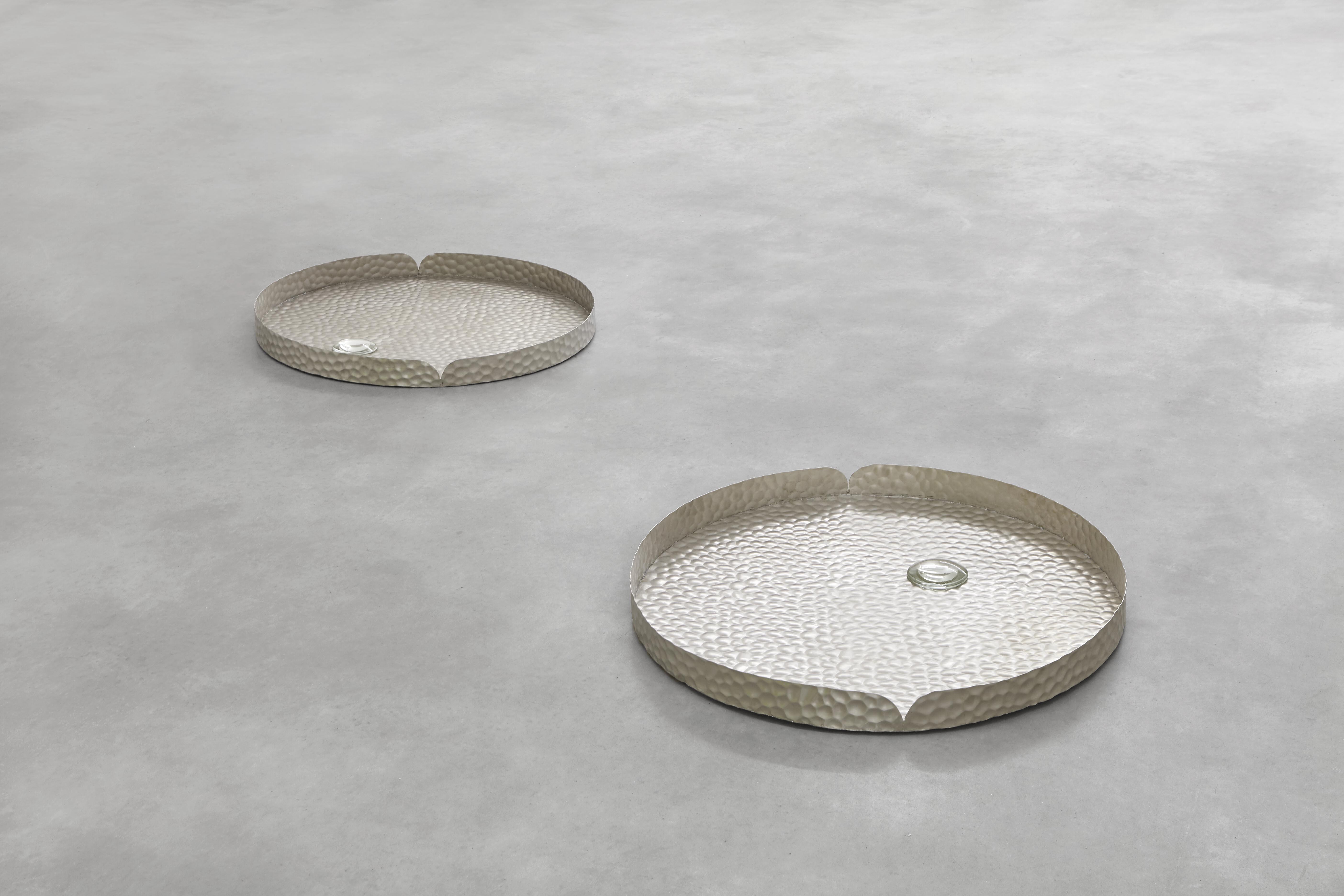 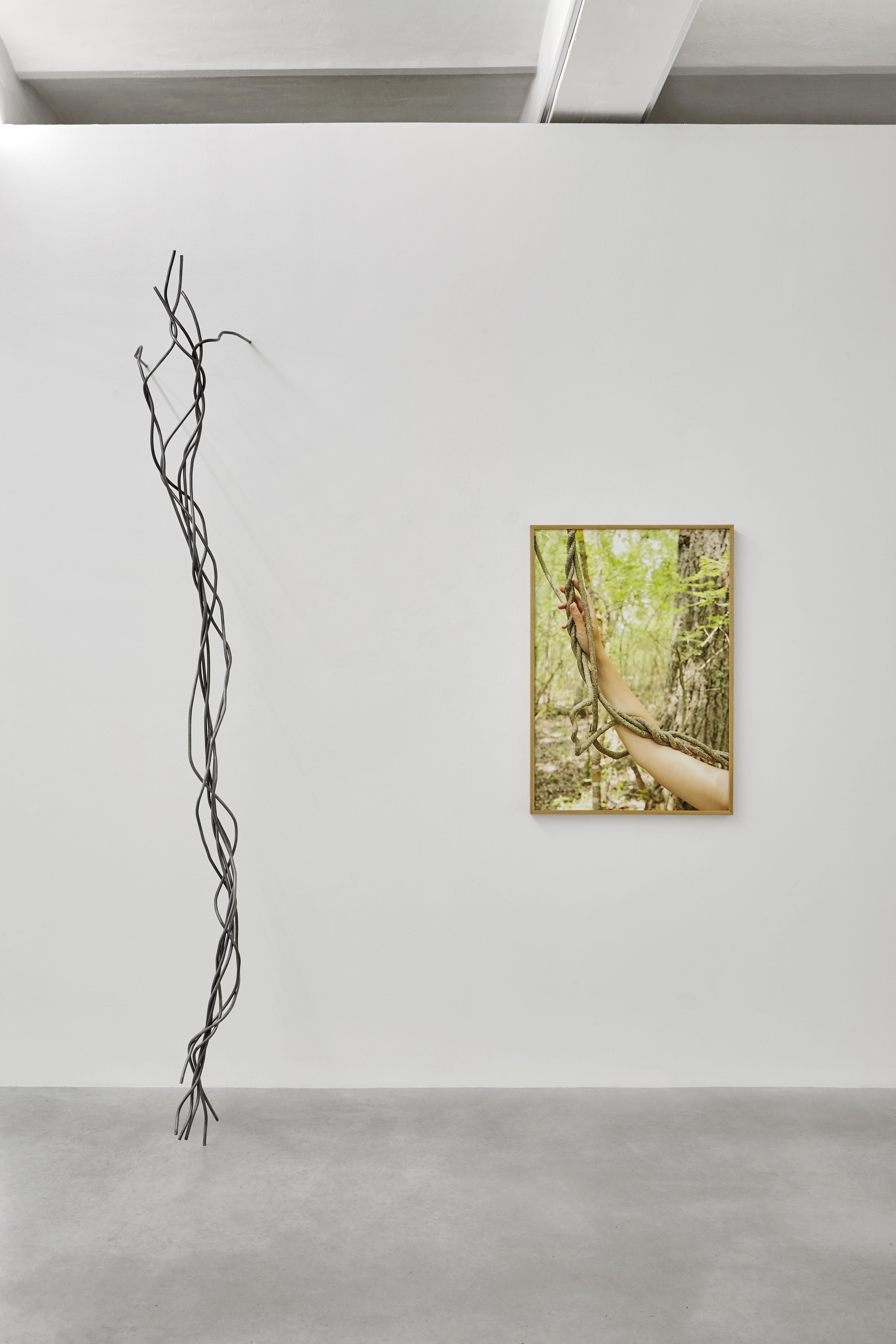 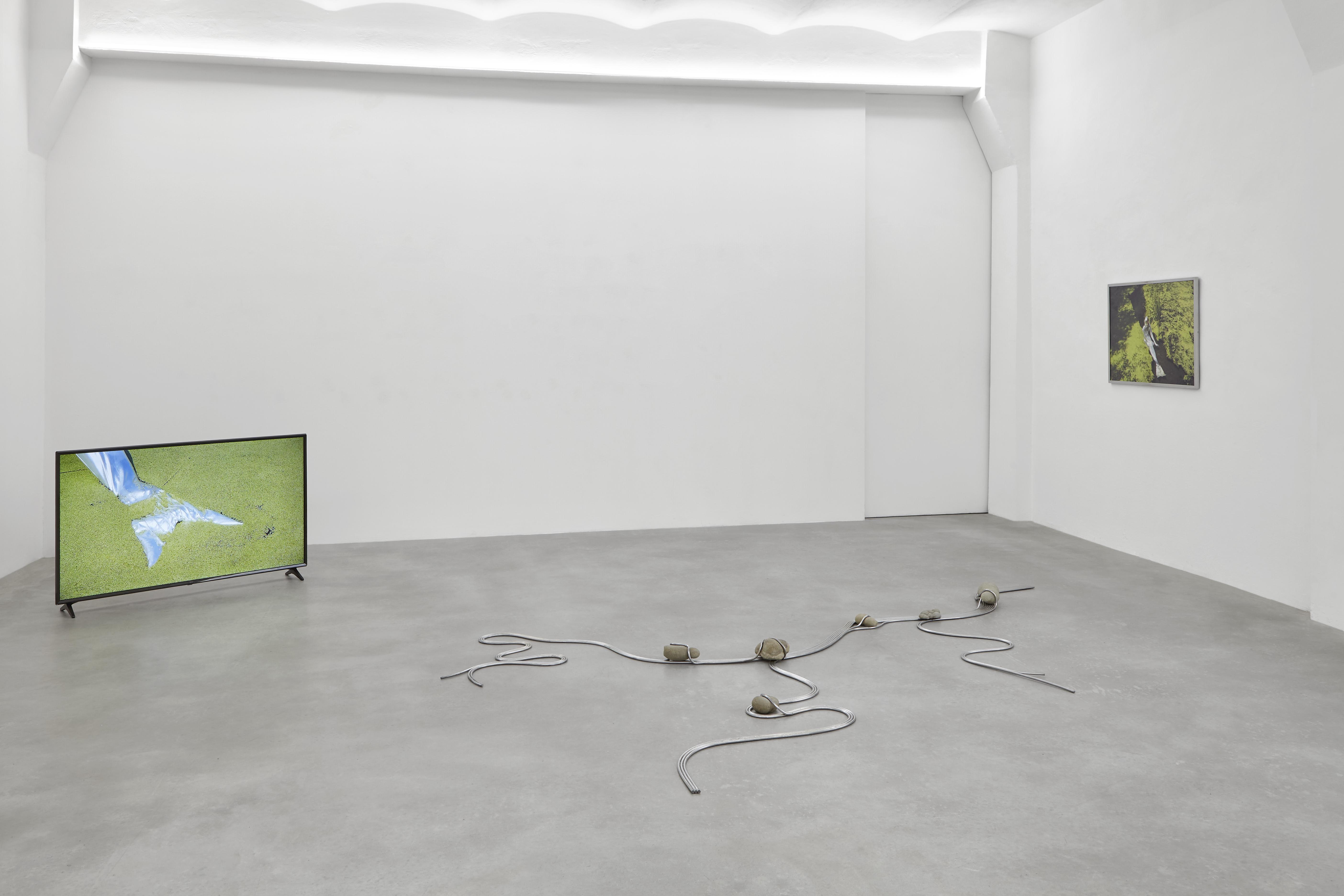 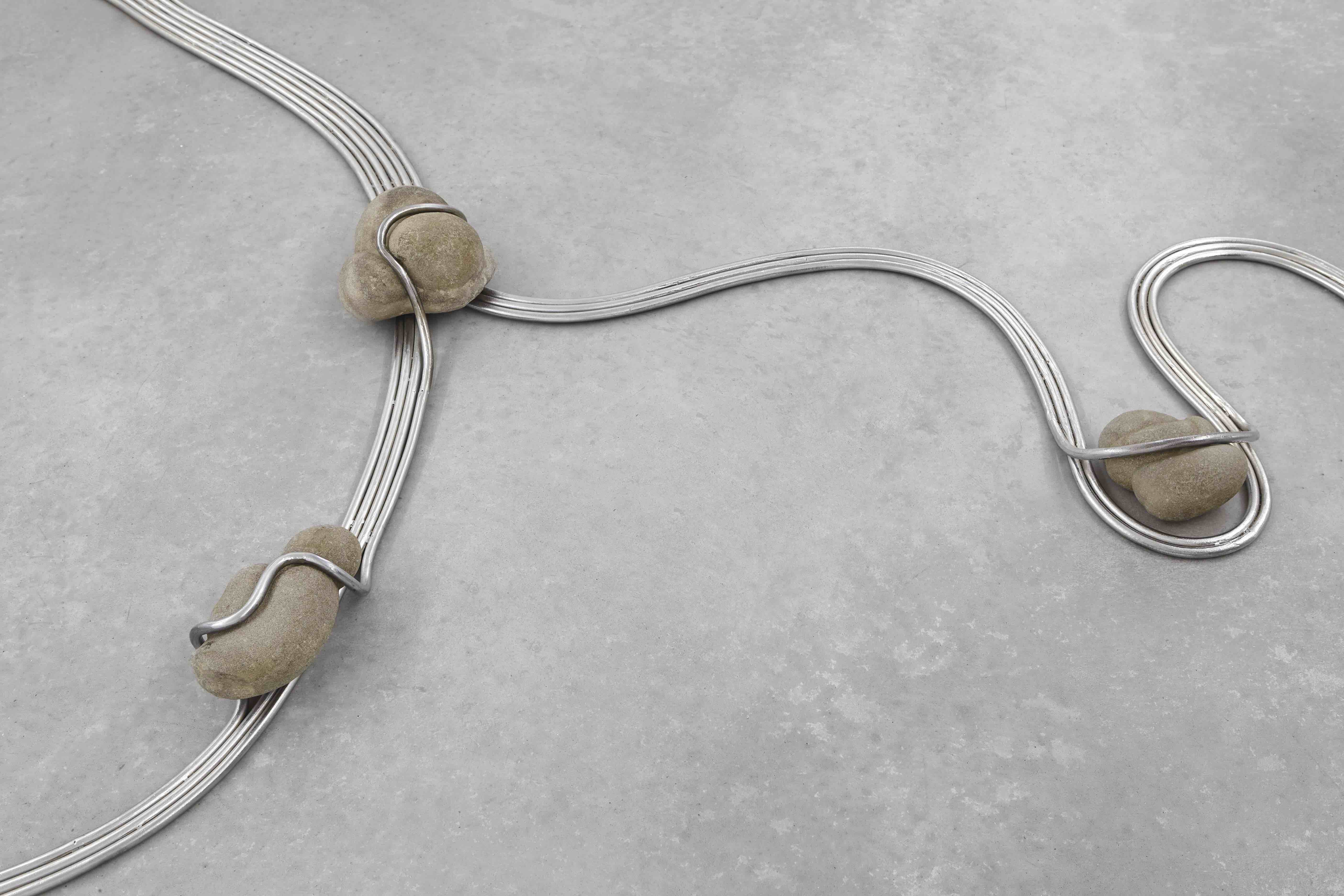 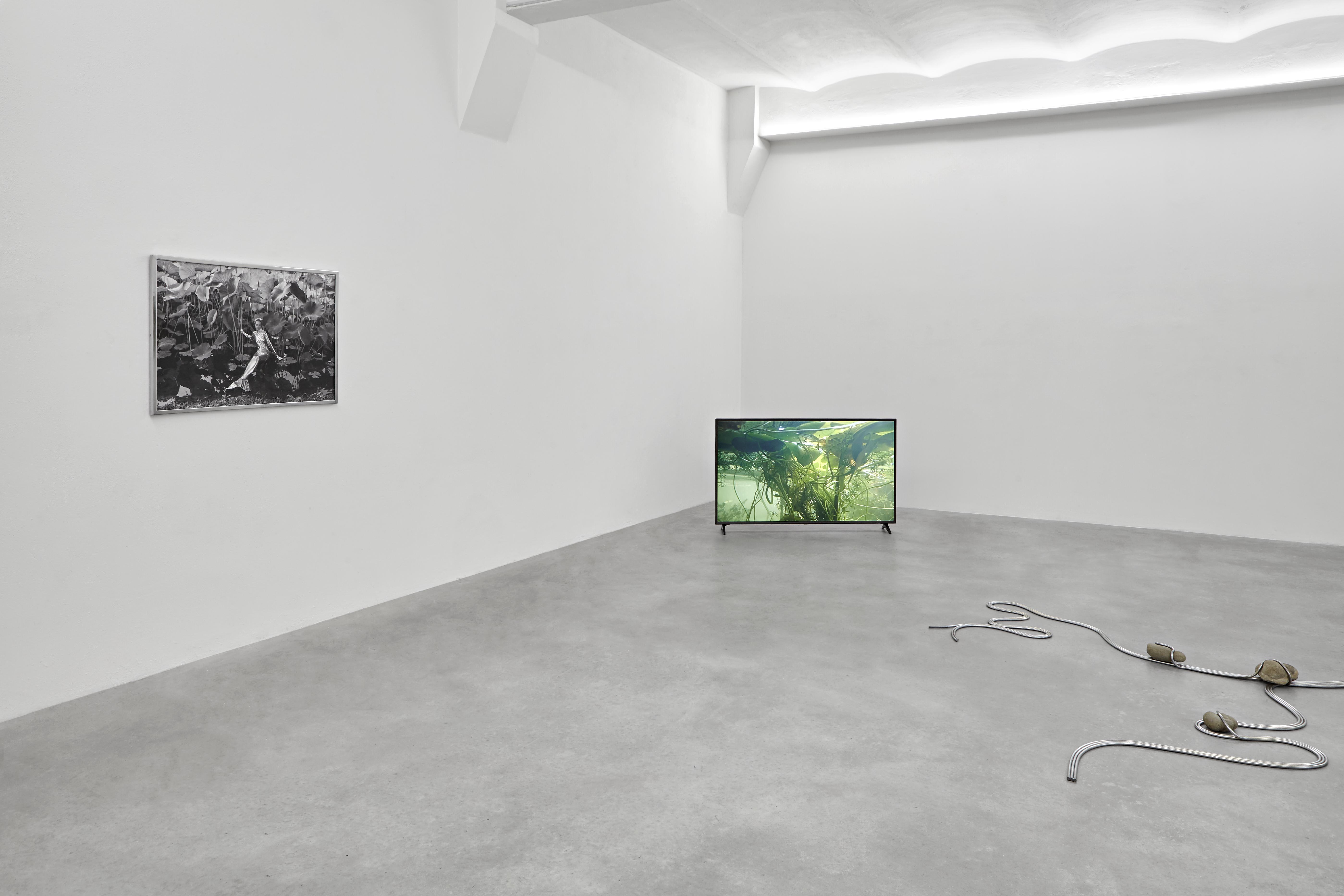 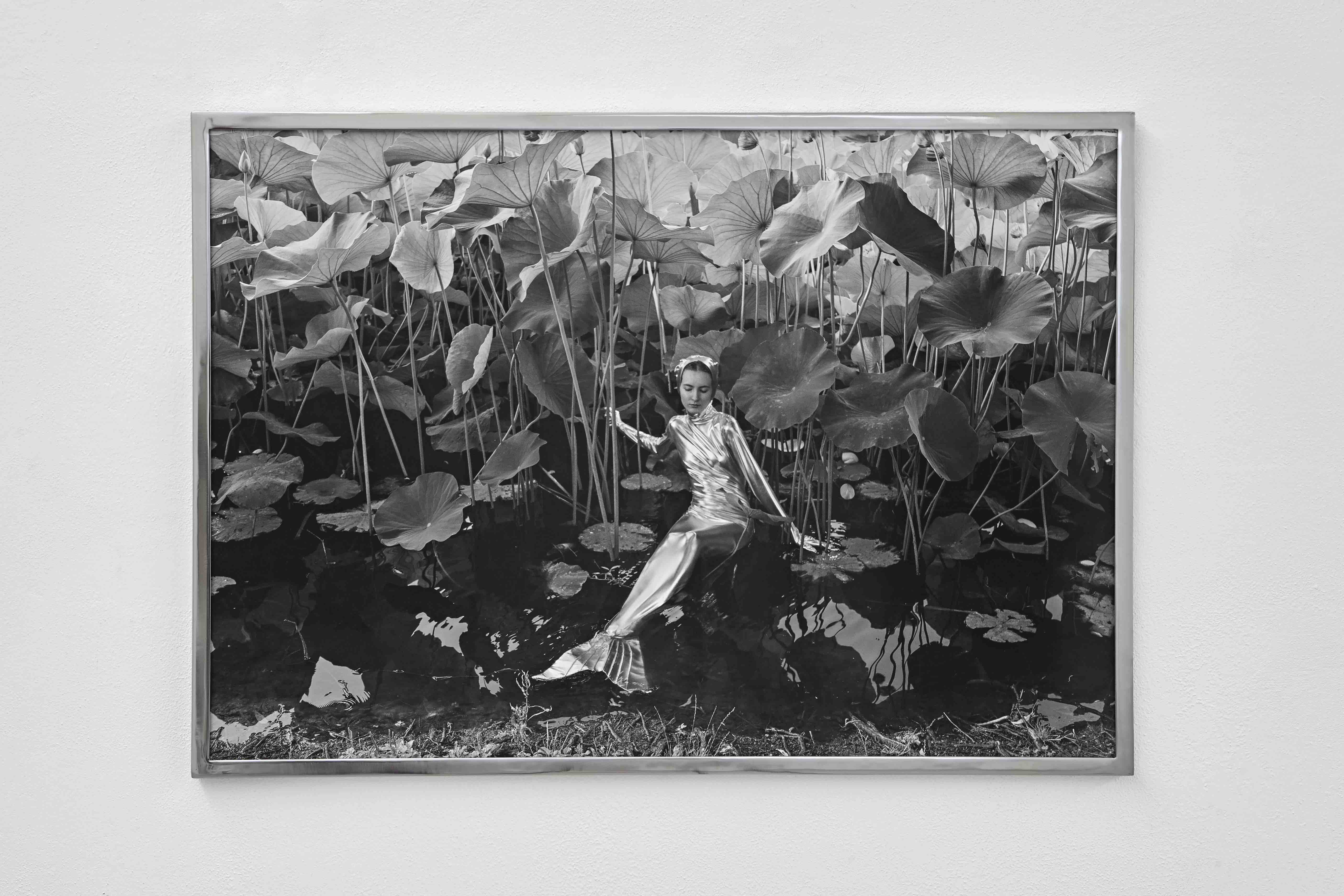 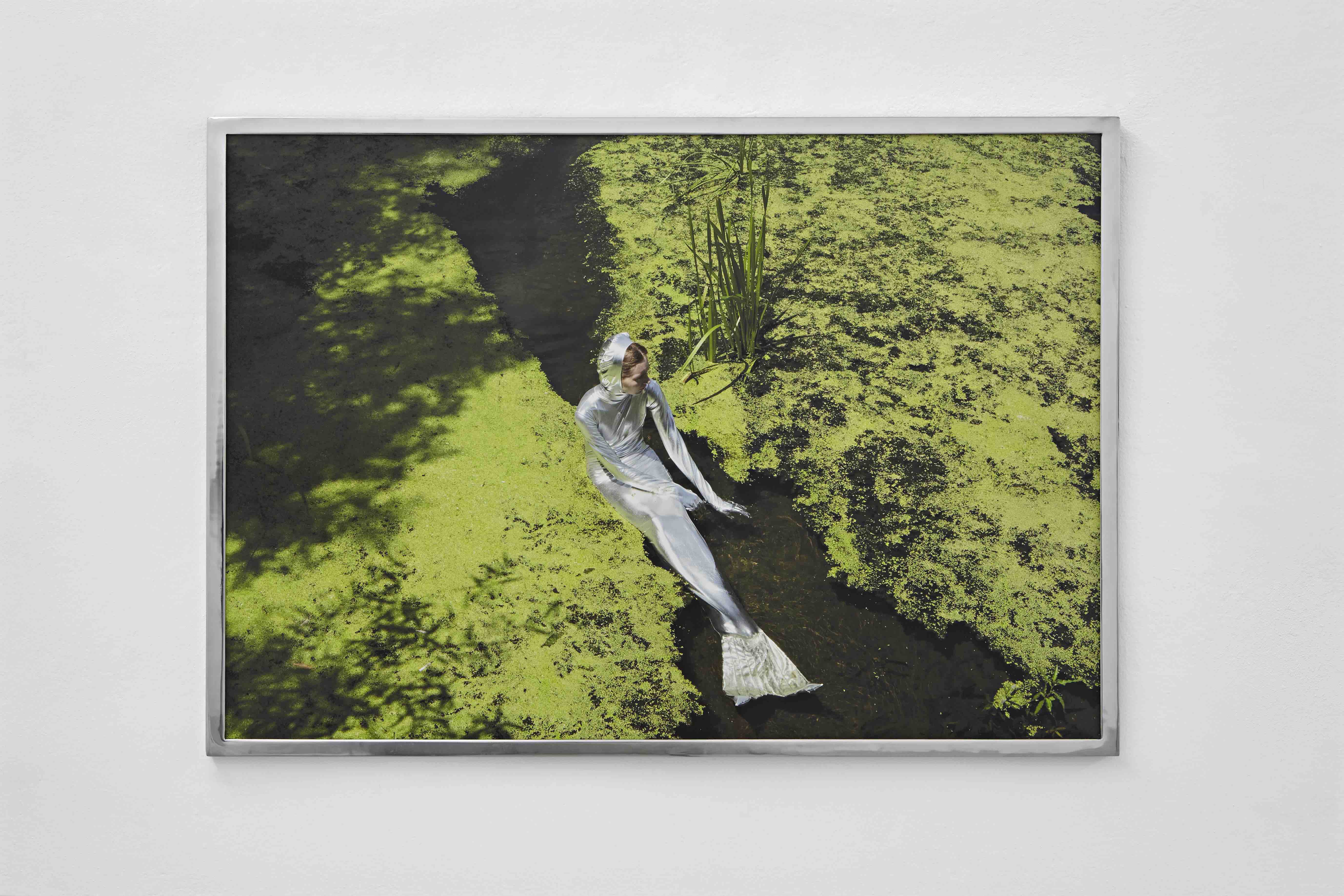 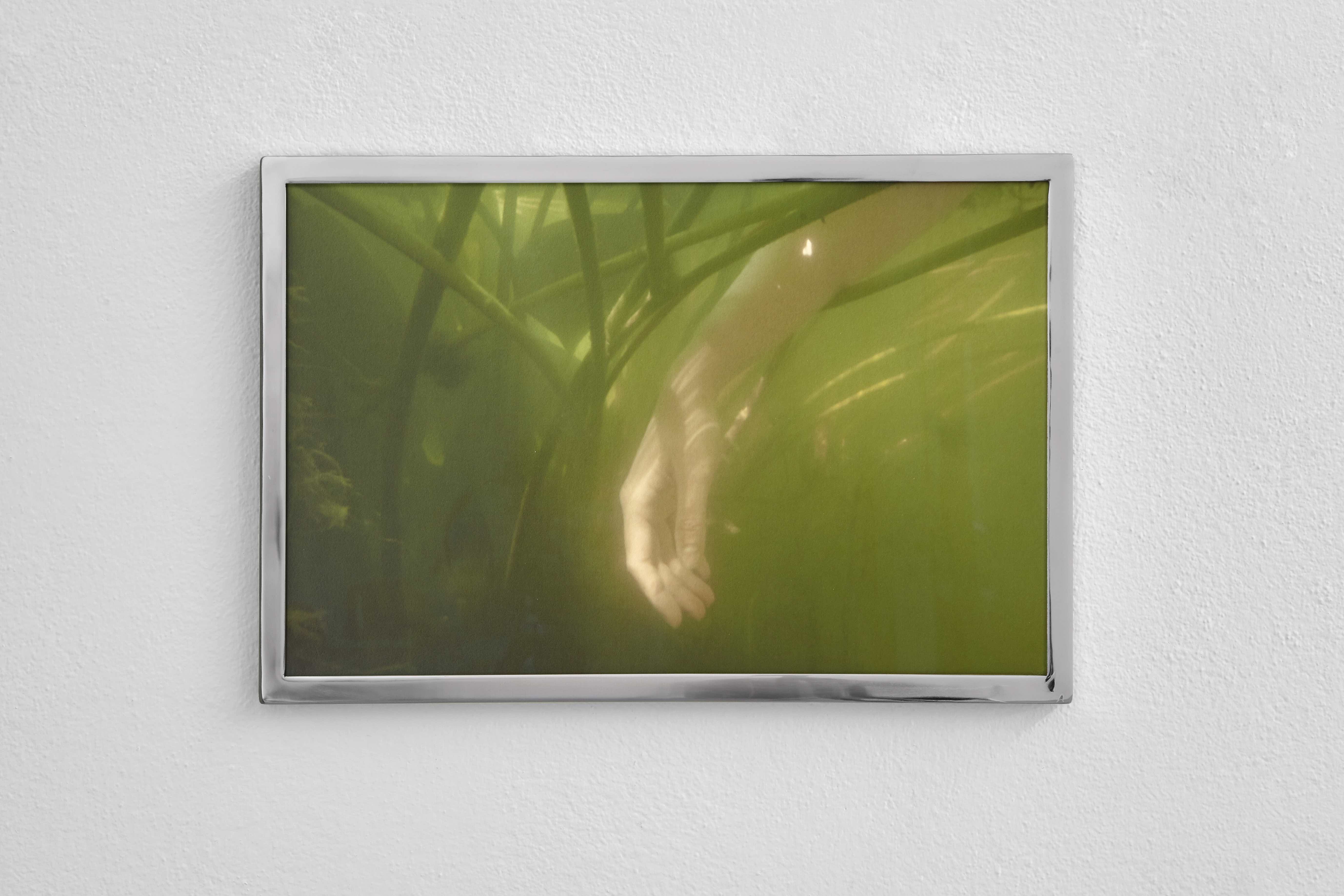 The exhibition consists of a recent body of work, produced during the year 2020 and it includes a series of steel sculptures, photographic works and a new short video.

Waterlily Jaguar is an exhibition that should be seen as a porous ecosystem, developed vertically between the water surface and the underwater. The artist examines closely the “event horizon” located on the cusp of these two spaces and its main inhabitants, namely a spectrum of hydrophytes (aquatic plants) by emphasizing their hybrid nature and the resulting iconographic associations.

Waterlilies are hydrophytes that grow in clusters and hormonally communicate together within their community. They can self-reproduce and have mobility across the water surface, being both earthed and waterborne. The waterlily’s roots settle in the silt below the water but its leaves and flowers are mobile, floating across the reflective watery surface. Water lilies communicate chemically with each other so that they can better flourish, signaling to each other if there are adverse conditions or imminent threat.

Since the times of Carl Linnaeus, an eighteenth century nature classifier, plants are generally considered to be less relevant than the human species, based on the lack of mobility and sentience. The actual capacities of water lilies are further evidence that plants require critical and cultural examination, as companion species, and that plants require an accompanying shift in human perception of their vegetal status.

Throughout history, plants from the Nymphaeaceae family were often anthropomorphized and their beauty and fluid nature found a correspondence in ancient myths and folklore. Hybrid characters, such as Sirens, Nymphs, Naiads and Nixe are shapeshifting water spirits, floating between two worlds. The water lily was portrayed especially often in the art of the Classic Mayan period in iconographic contexts that can be interpreted in a variety of ways.

There are essentially three motifs: water lilies sprouting from the backs of crocodiles swimming in the water; the head of the “earth monster,” around which water lilies are entwined; jaguars that are either wearing the stalks and buds of water lilies as a head ornament or dancing with water lilies. The association between the jaguar and the water lily is especially dominant. The Water lily Jaguar god is seen, among different theories, as a god of protection, fertility, royalty, as well as a god of plants.

Upon entry in the gallery, the viewer is already confronted with a separation of the two spaces, encountering a single photograph which introduces the underwater gardens and a green latex curtain, signaling both a liquid boundary and the vegetal water depths.

Behind the curtain, a sensing ground for all that lies above the surface is revealed through a series of steel sculptures, embodying giant Victoria Amazonica lily pads, as well as a steel liana extending from the gallery floor, both species of plants found in the tropical ecosystems of the Amazon. The works in the exhibition are all converging towards the short video (a new collaboration between Nona Inescu and the sound artist Simina Oprescu), which further explores the depths of underwater gardens, soft flora and their mythical counterparts.