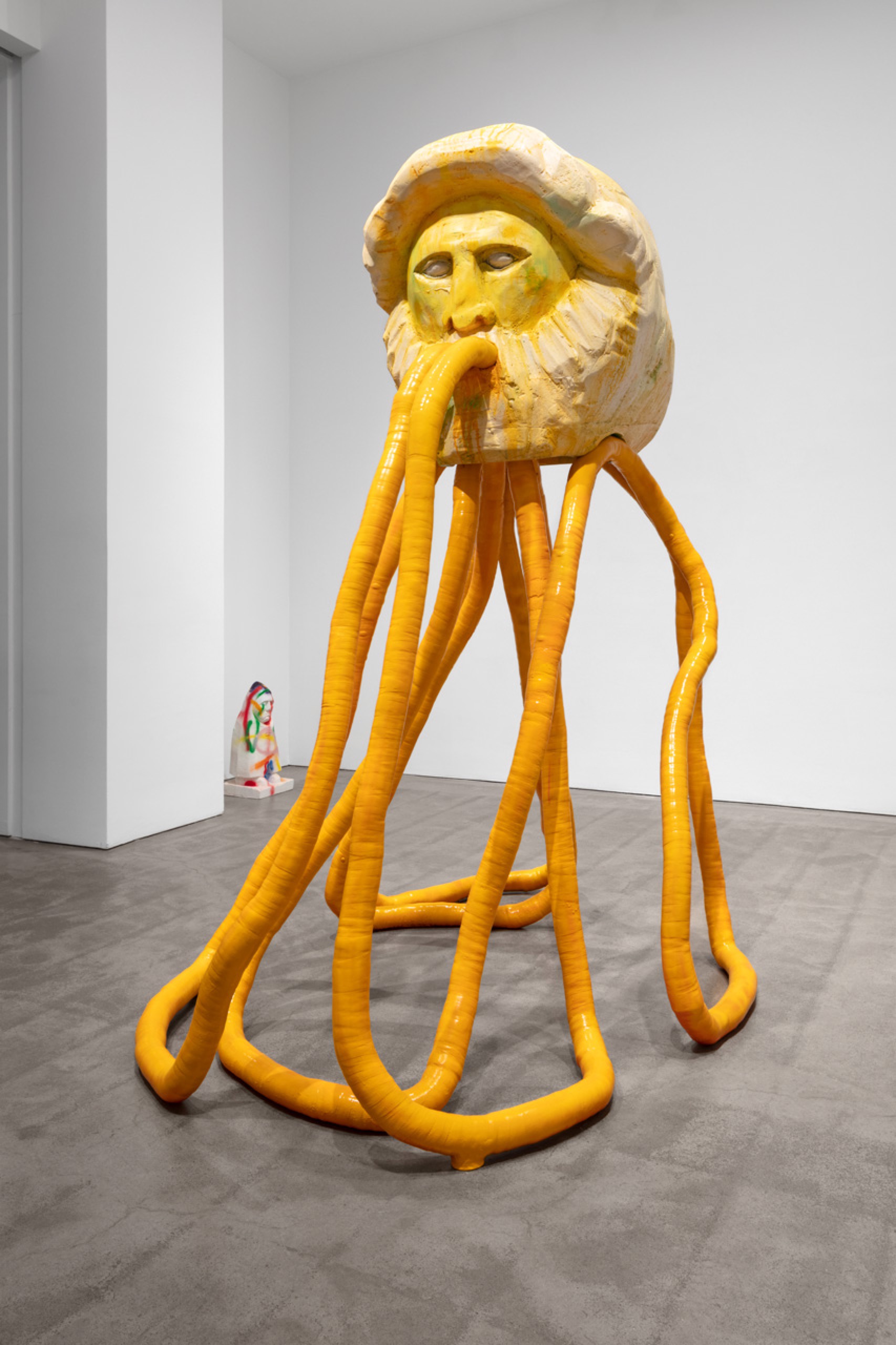 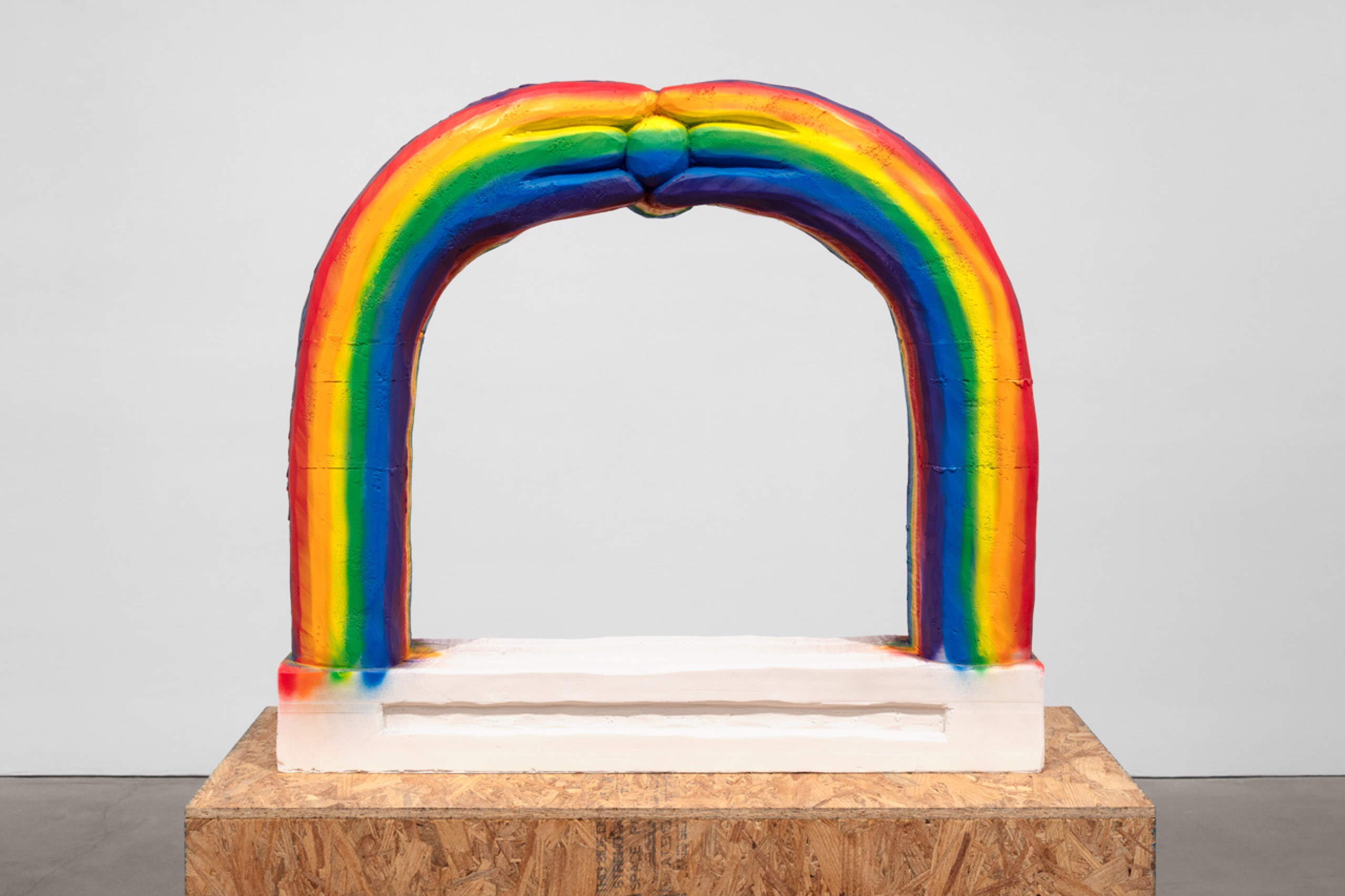 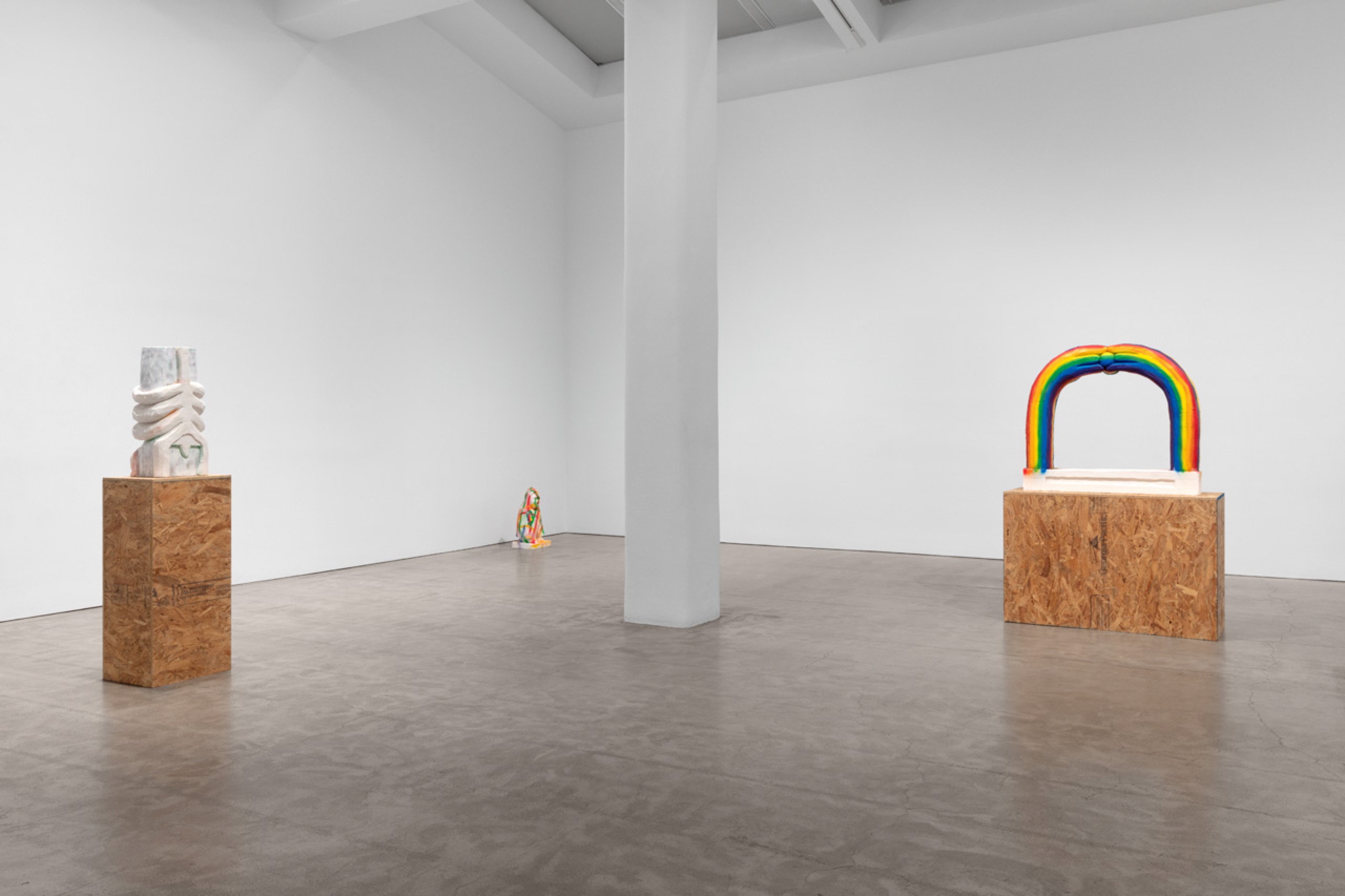 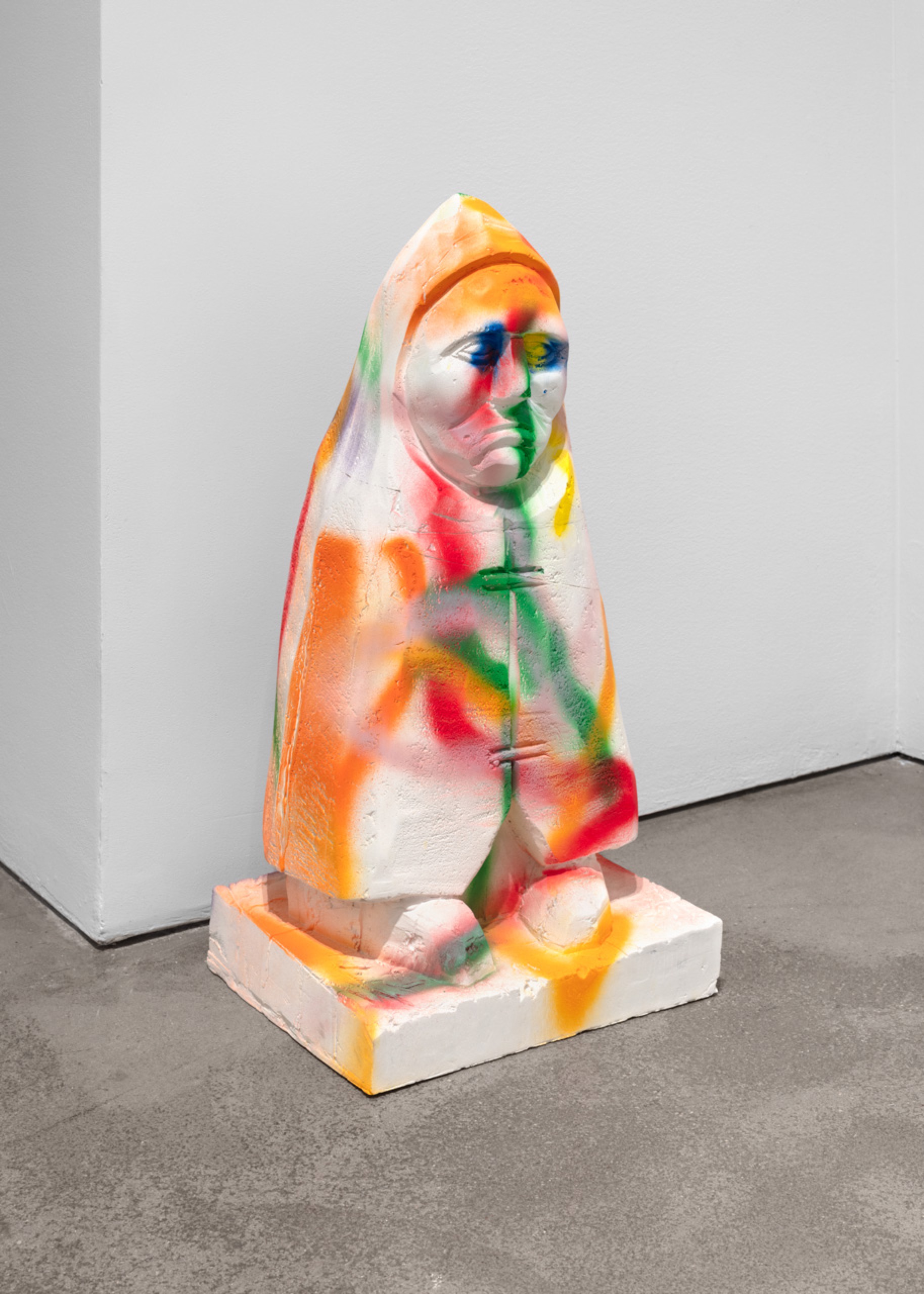 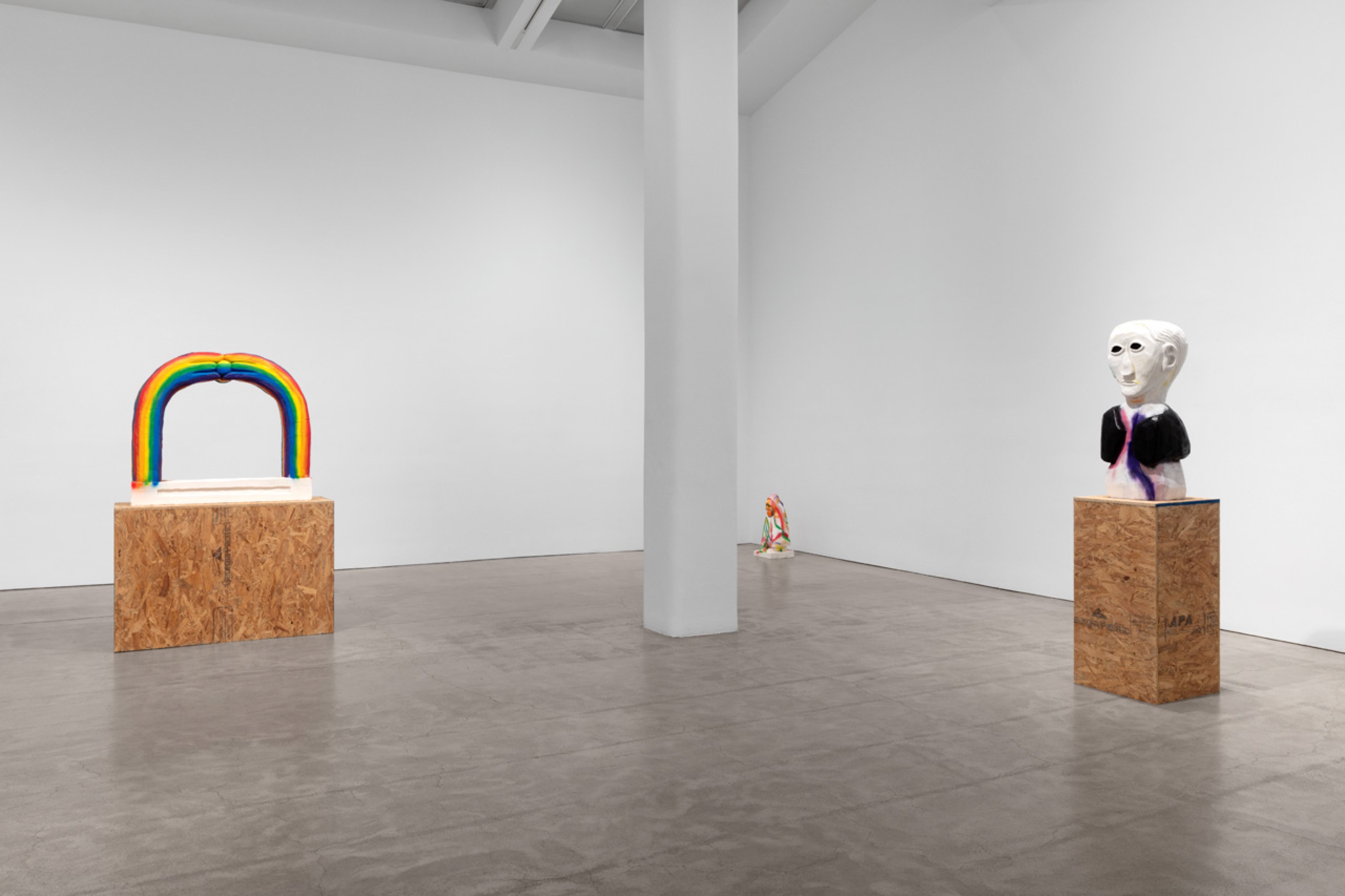 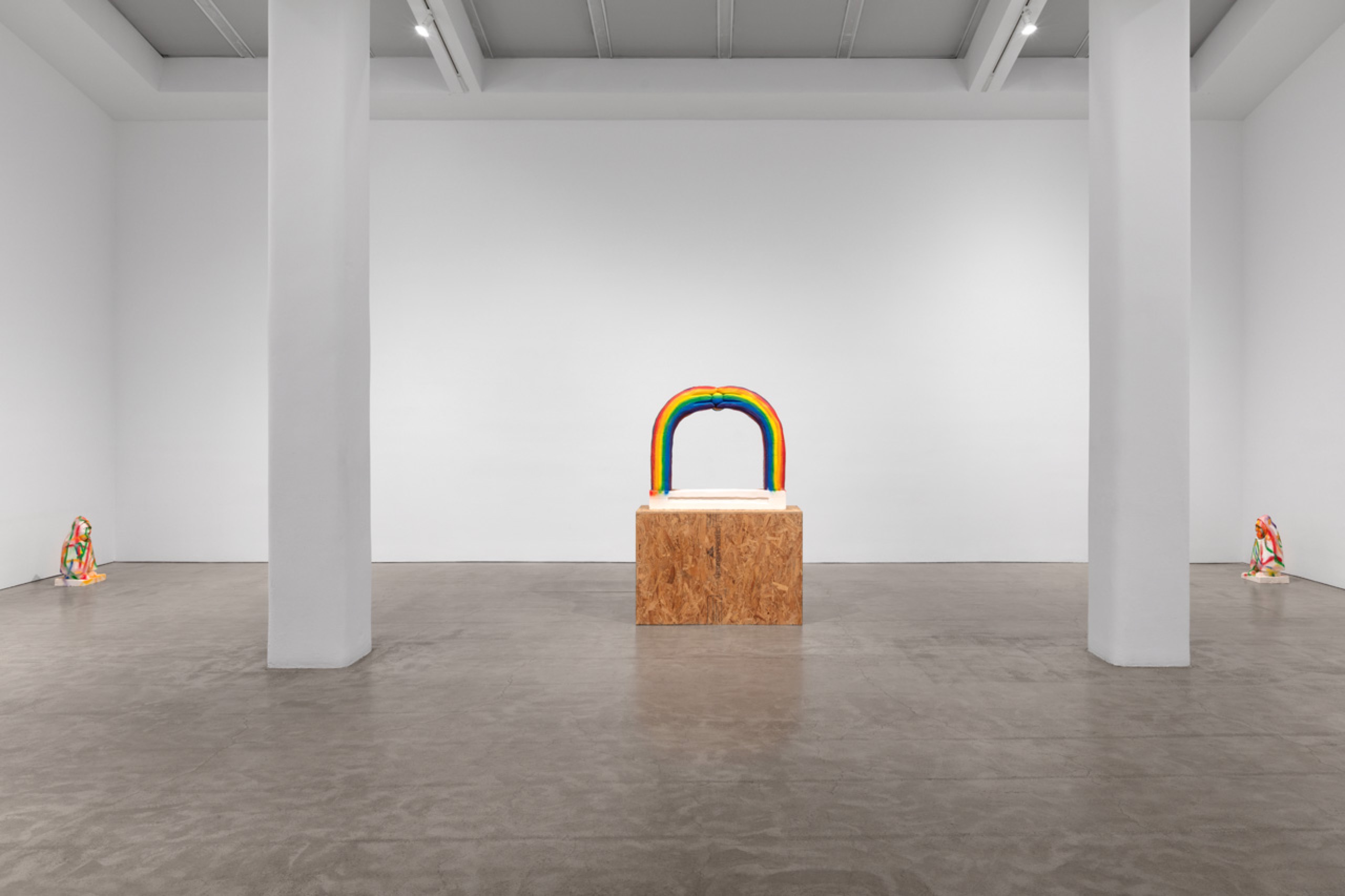 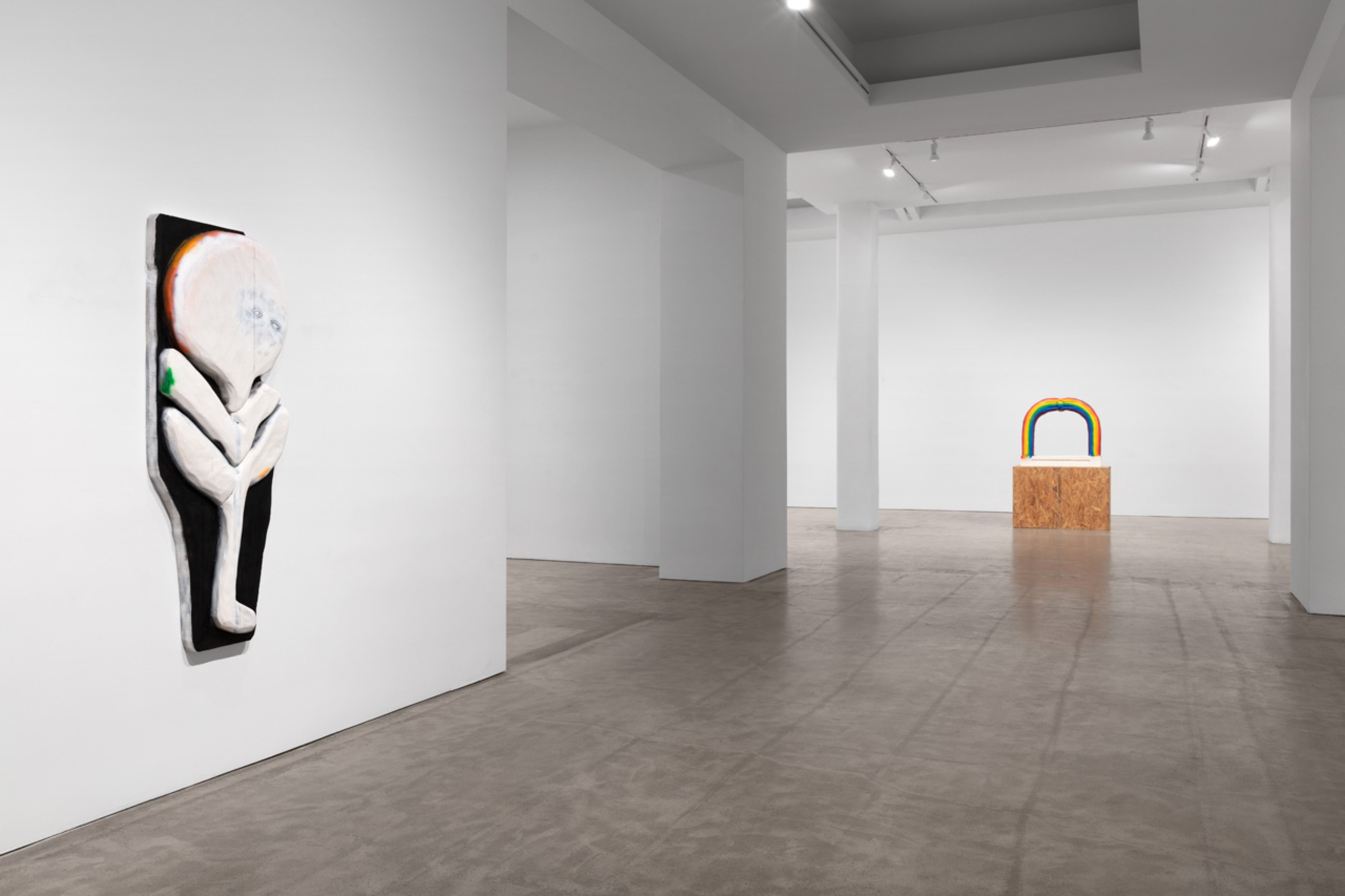 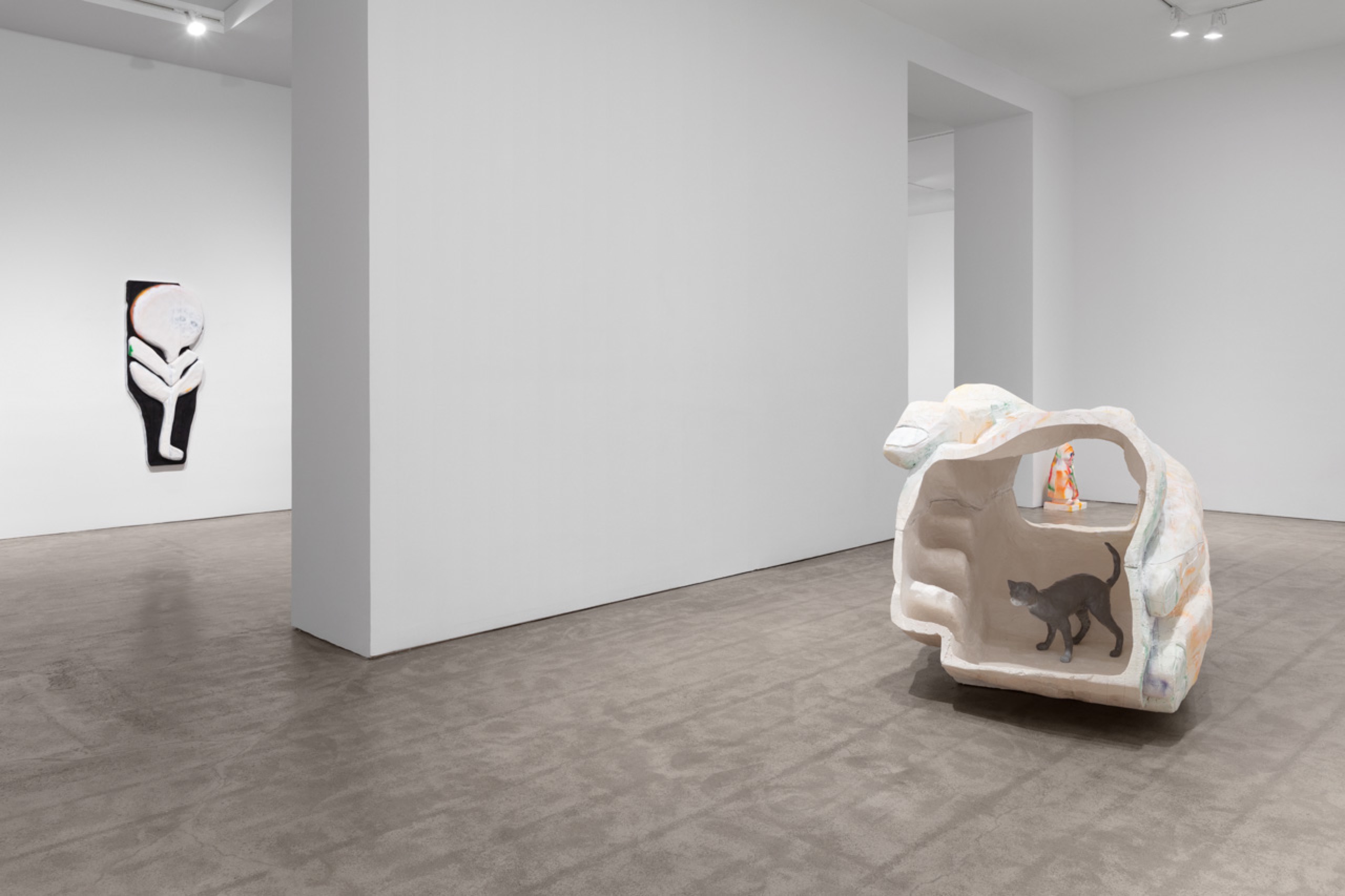 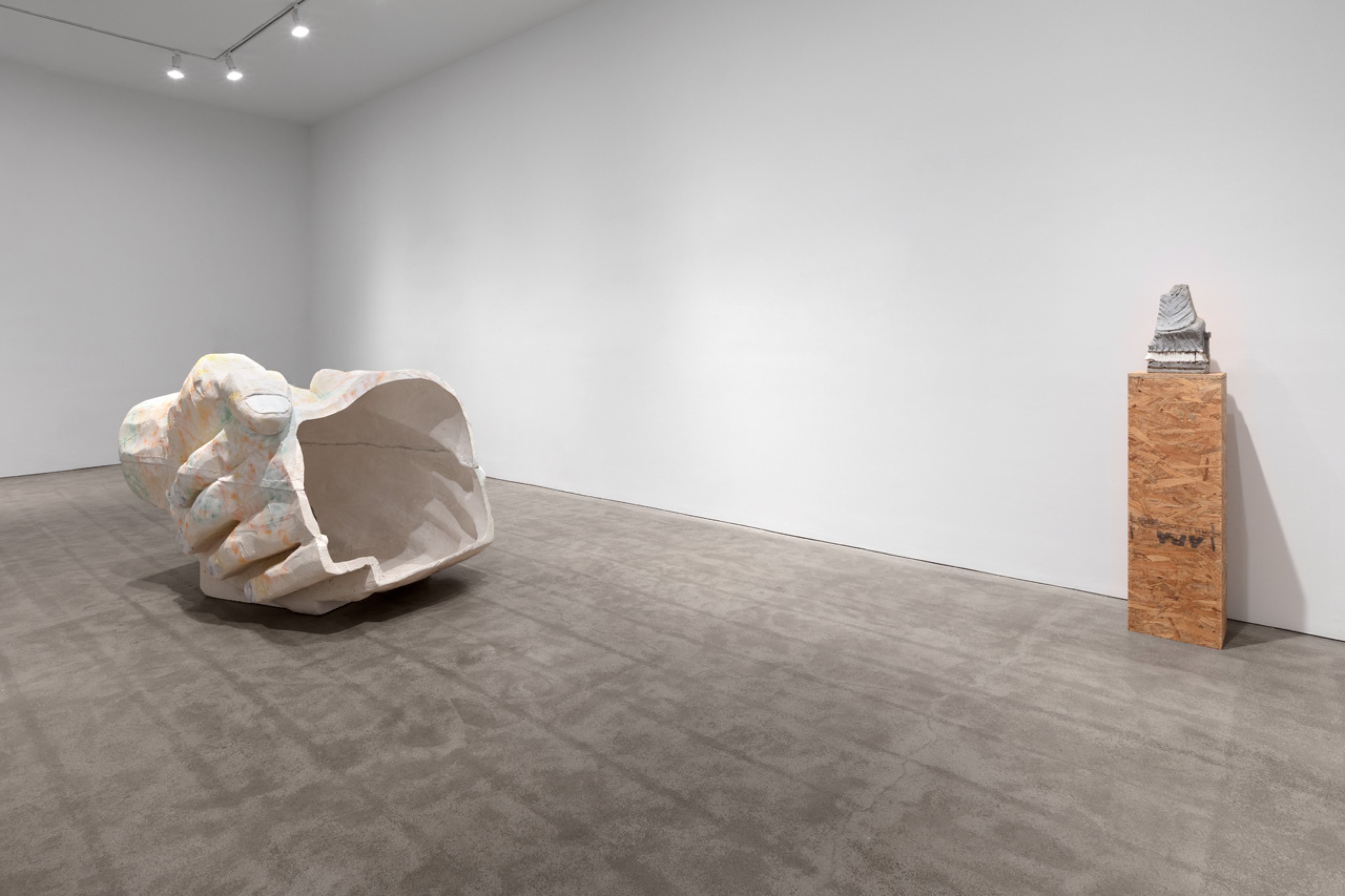 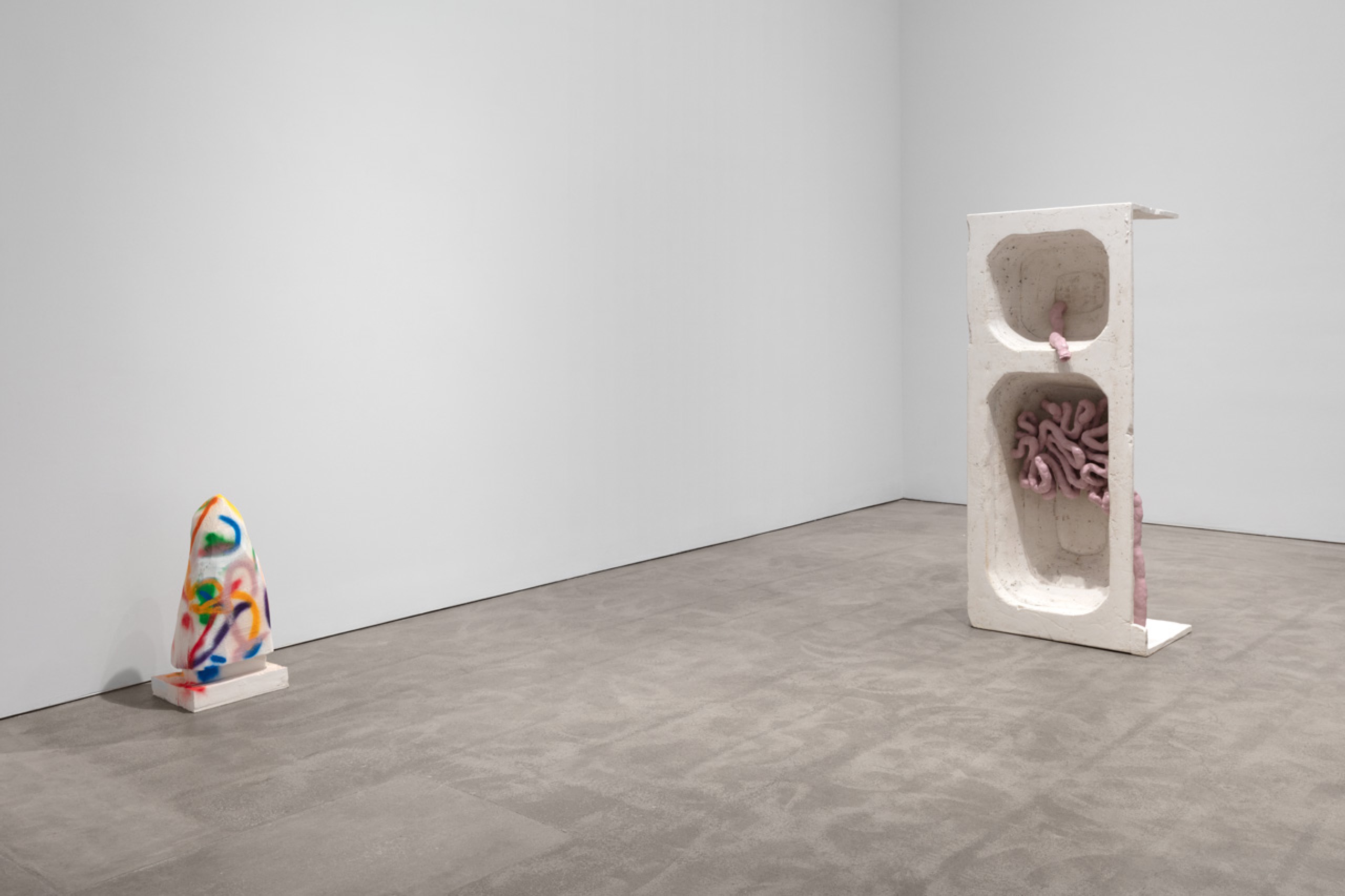 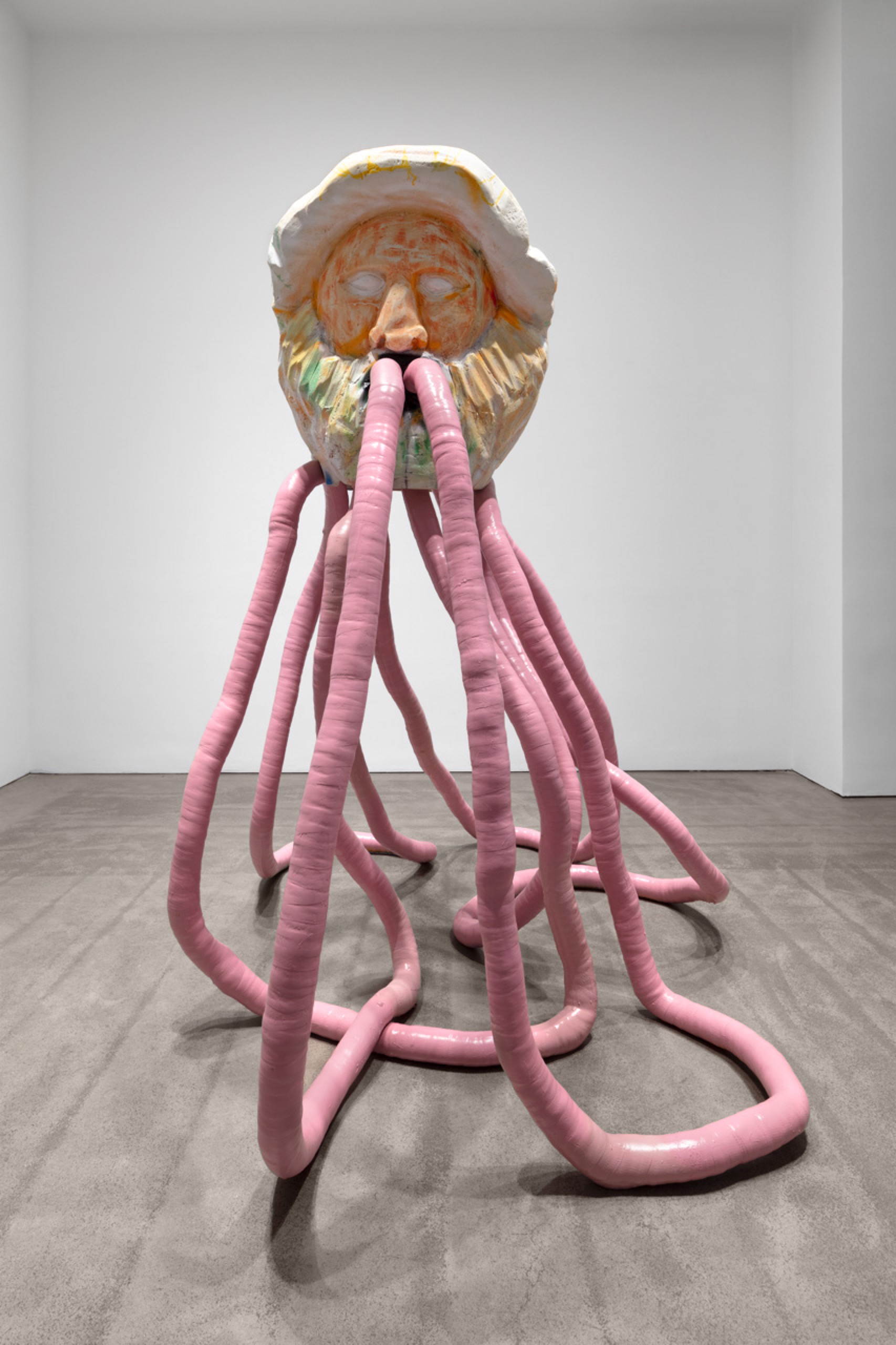 Building from his previous exhibitions in both Zurich and New York, “Compost” references the sculpture of Greek and Roman antiquity to examine the human figure and convalescence as major tropes throughout art history. Matherly’s rough-hewn objects—cast in concrete, gypsum, fiberglass resin, and other contemporary materials—allude to corporeal and historical decay and entropy, eternal regeneration and continuity.

Juxtaposing classical elements with anachronistic and humorous details, Matherly explores psychological and bodily trauma, and the often oblique or recursive path of convalescence. Two towering sculptures titled Eat yourself fitter feature an enlarged reproduction of the head of Asclepius, the Greek god of medicine. Sentineled in each of the front galleries, the deities face out towards the street, gorging on brightly colored tubes that tumble from their mouths in intestinal coils. The absurd action is both defiant and futile, grotesque and comical—bringing to mind the cannibalistic antagonist of the 1980 Italian horror film Antropophagus and the ancient ouroboros symbol of a serpent who eats its own tail.
(...)

Other works take as their point of inspiration the cult of the Gallo-Roman deity Sequana, the goddess of the river Seine, and a sanctuary for healing consecrated in her honor at the river’s source near Dijon, France. To prompt or thank the goddess for a cure, devout suppliants would leave anatomical votives as offerings at the site, including a cast of a spinal column and ribs, internal organs, and other ailing body parts. Matherly loosely recreates these relics, leaving evidence of the fabrication process. In rendering the ancient goddess as well as other idiosyncratic sculptural fragments, Matherly prompts meditation on the social, political, and psychosomatic aspects of convalescence, regeneration and decay.

Justin Matherly (b. 1972 in West Islip, New York) received his BFA from the University of Pennsylvania and his MFA from Hunter College. His work has been included in international exhibitions including “Lustwarande ‘19 – Delirious” at Park De Oude Warande in The Netherlands (2019), “Kunstler und Dichter (Artists and Poets)” at the Vienna Secession (2015), “A Triple Tour: Works from the Pinault Collection” at La Conciergerie, Paris (2014), the Public Art Fund’s 2012 show “Common Ground at City Hall Park,” and the Sculpture Center’s “In Practice Projects” in 2010. His work is represented in collections worldwide, including the Helga de Alvear Foundation Cáceres, Spain, and the Nasher Museum of Art, North Carolina, US. Matherly is represented by Paula Cooper Gallery in New York, Galerie Eva Presenhuber in Zürich, and König Galerie in Berlin. The artist currently lives and works in Brooklyn, New York.