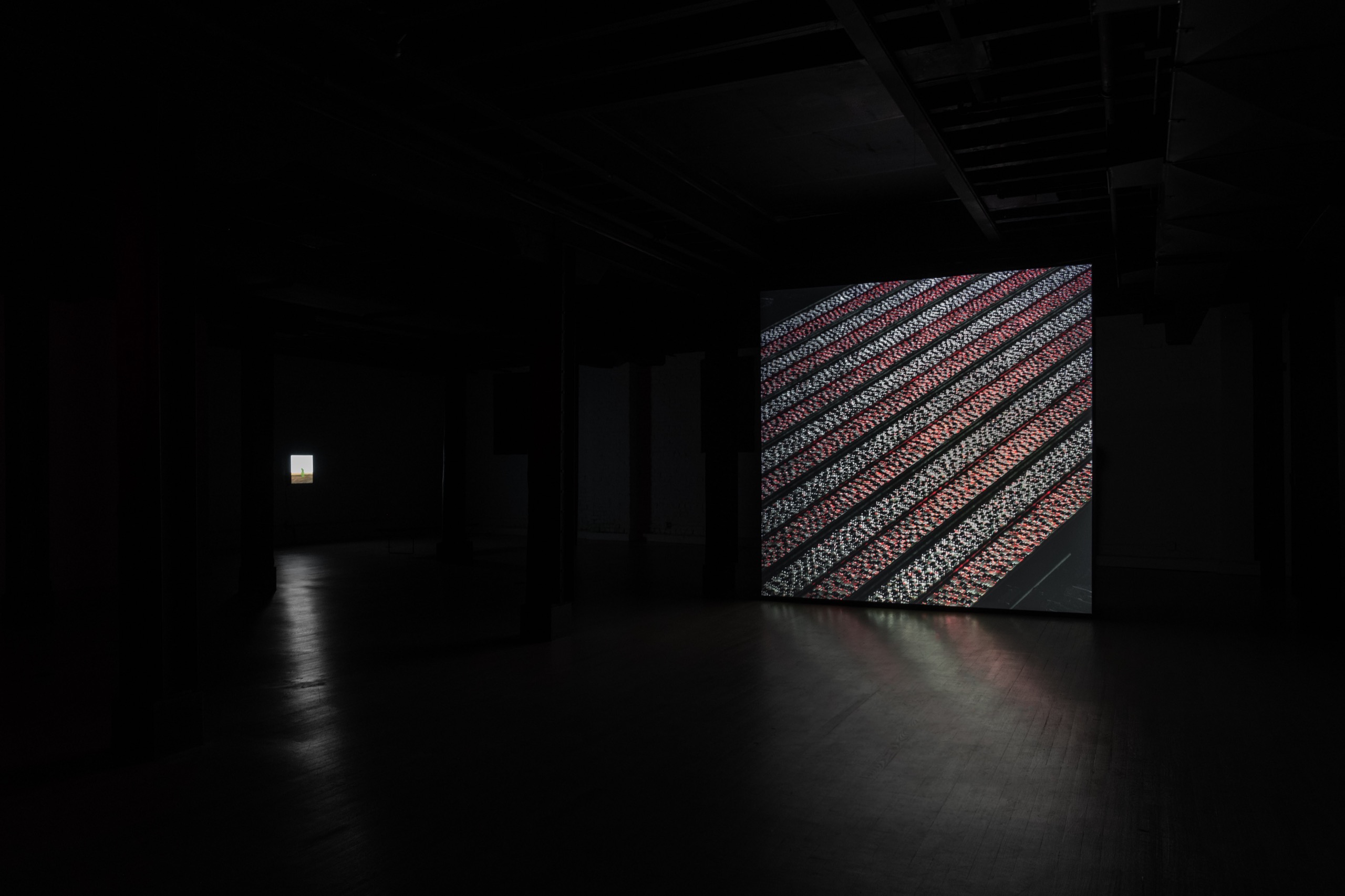 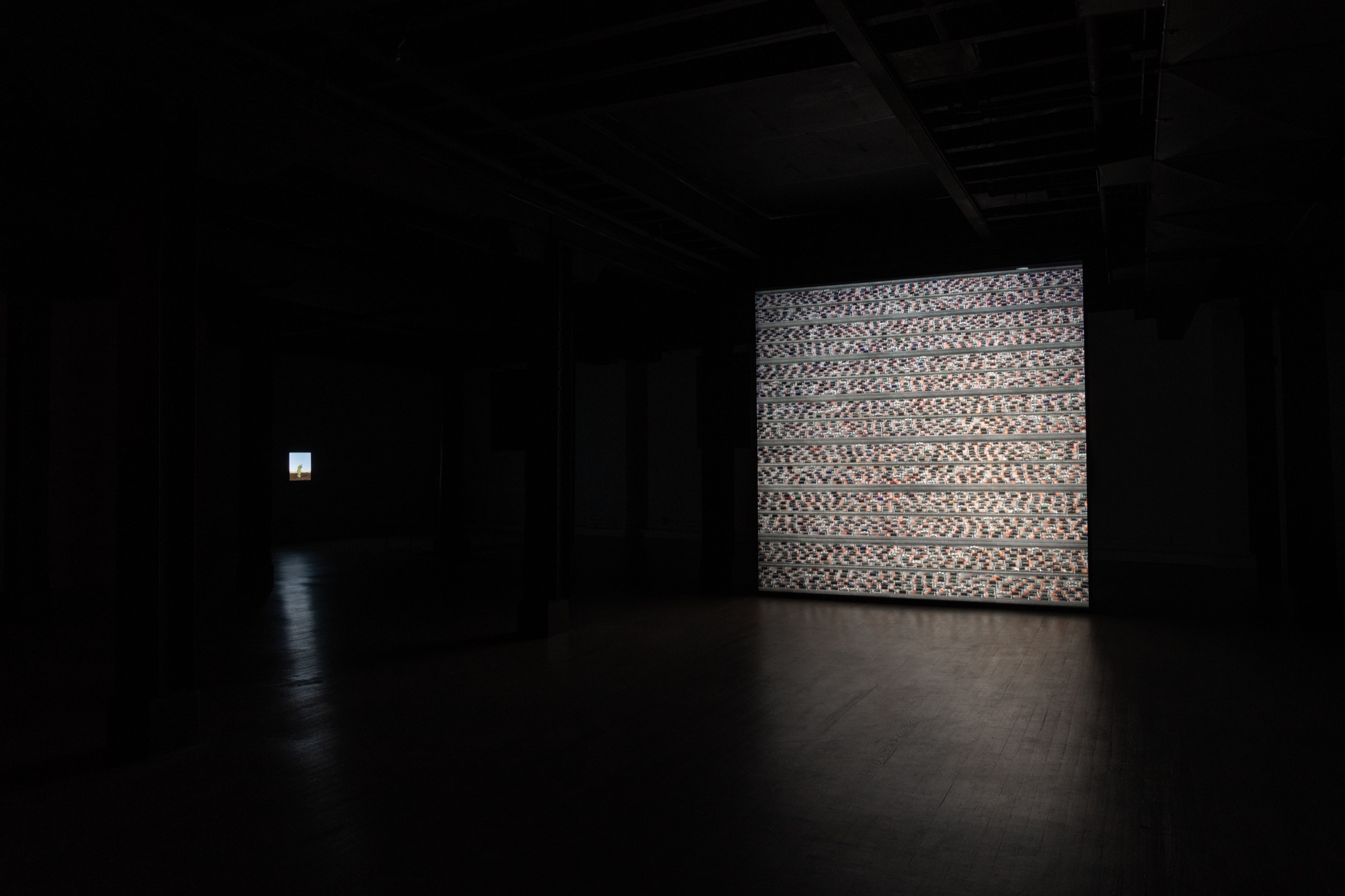 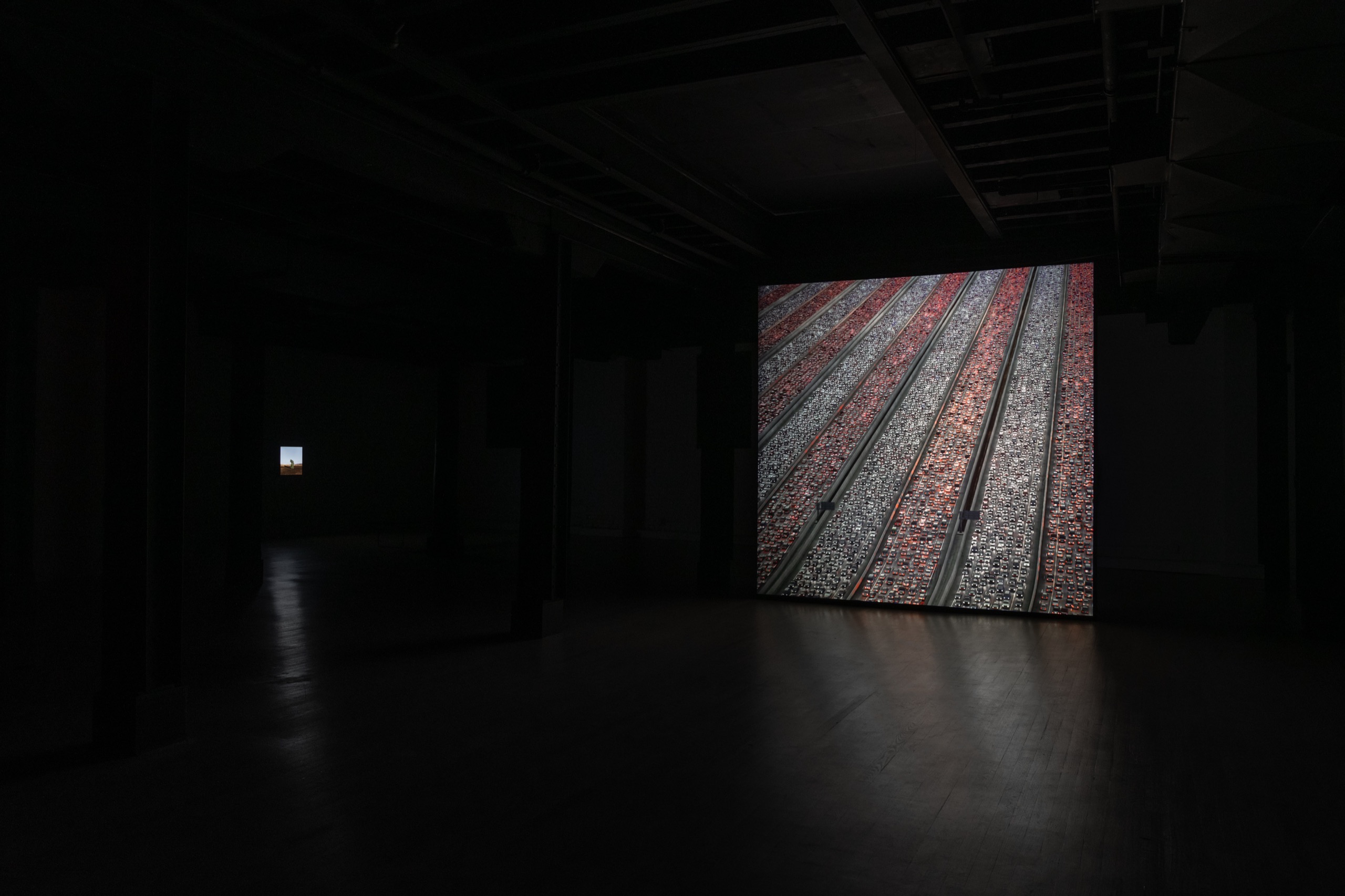 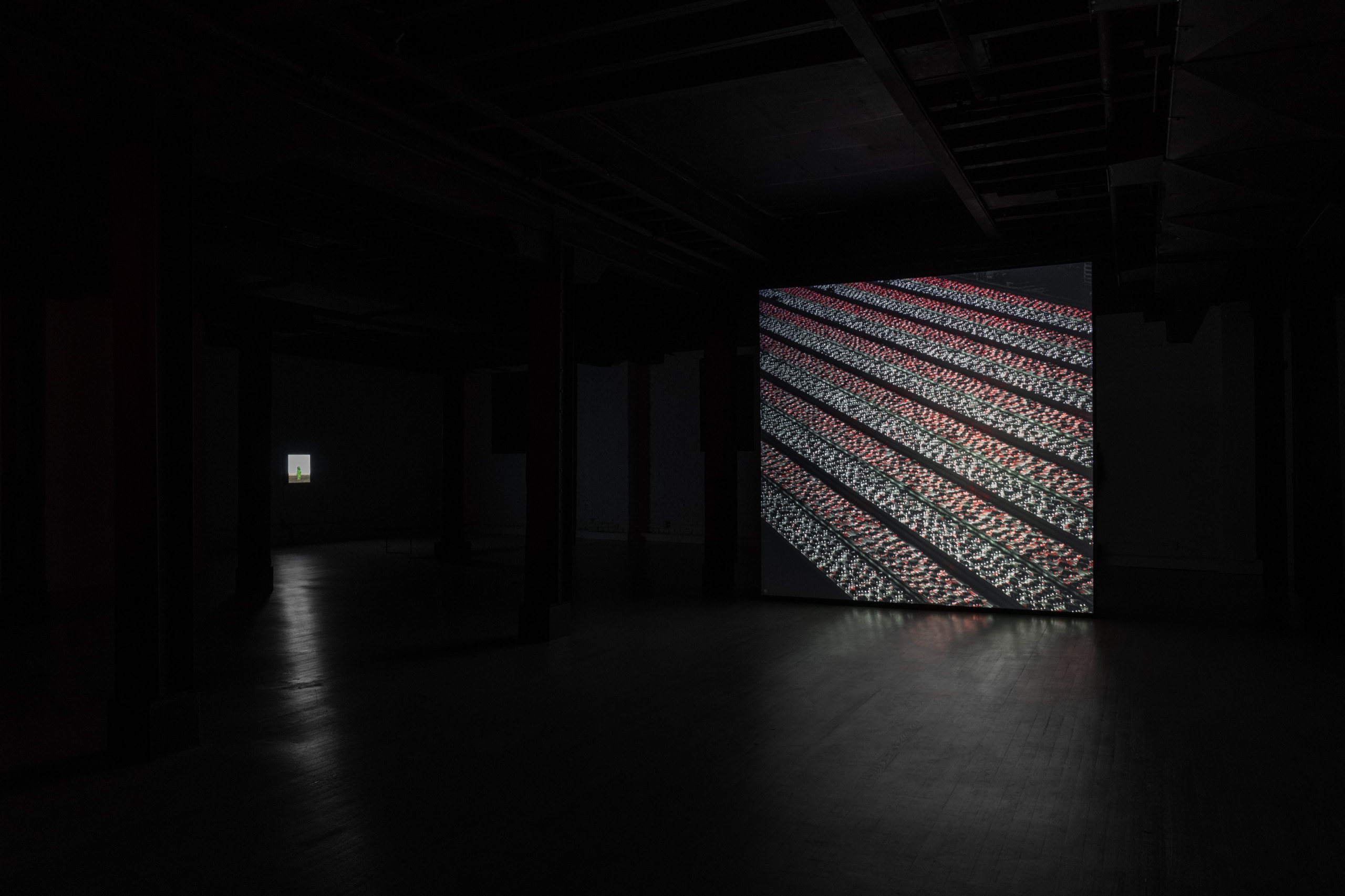 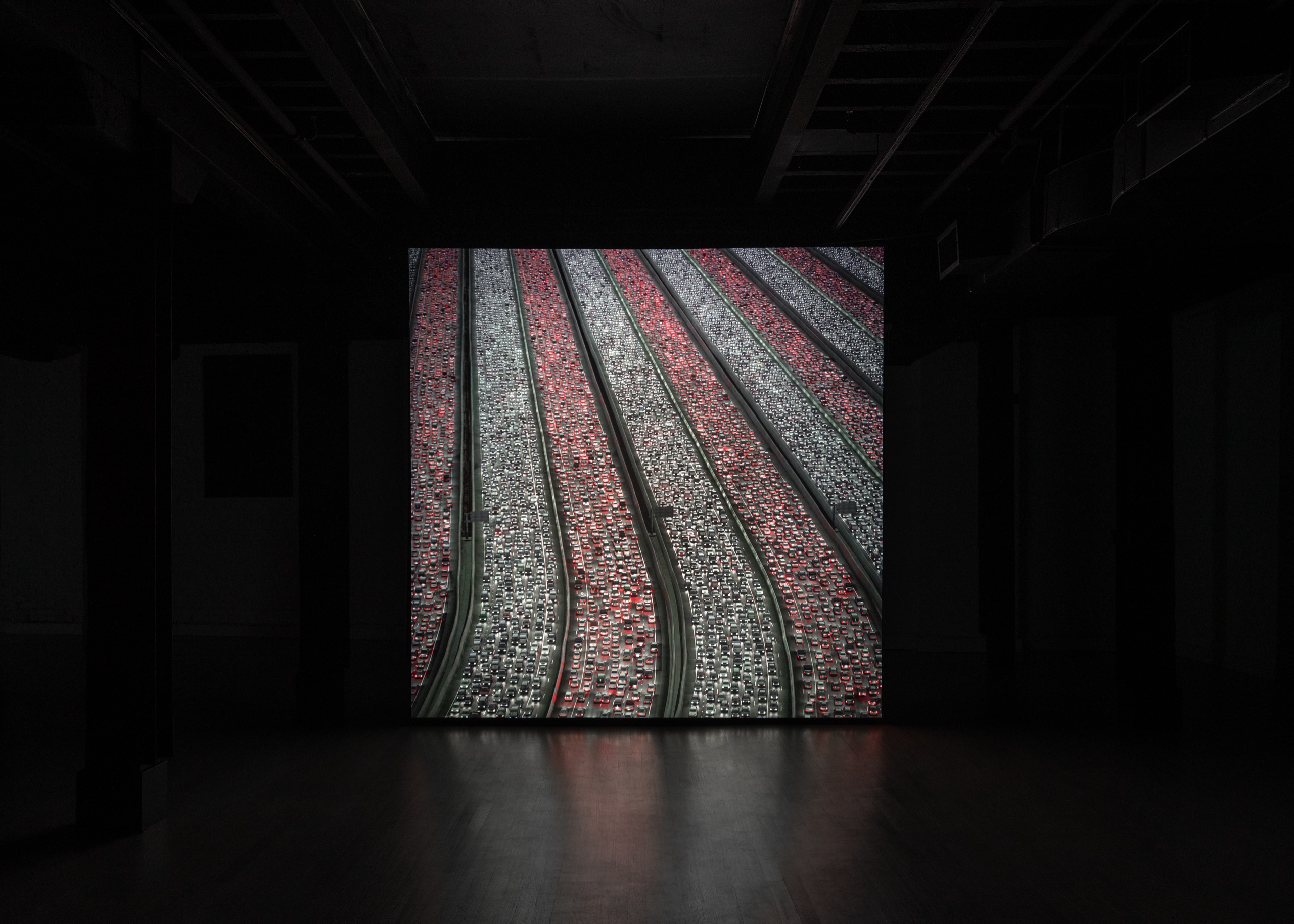 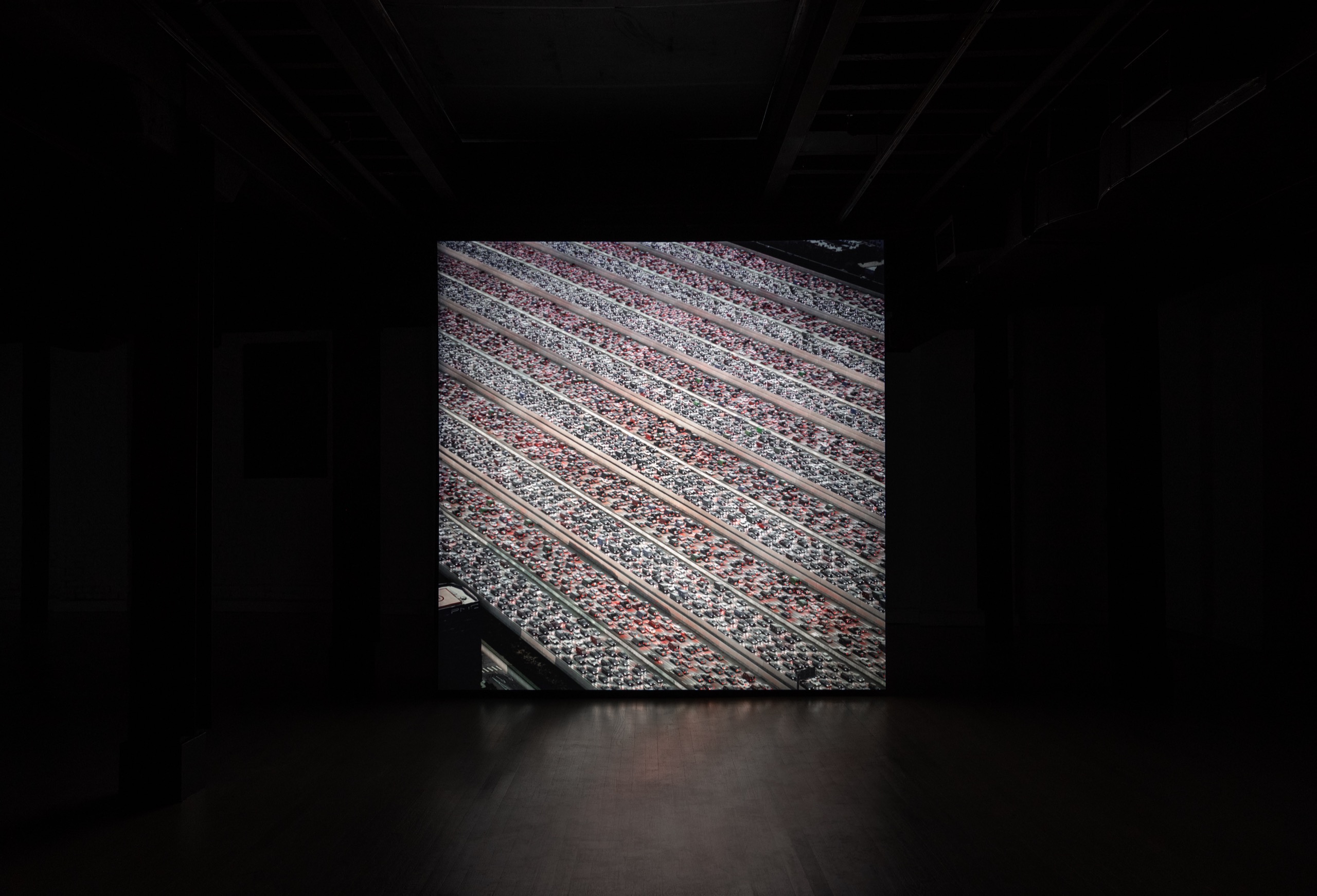 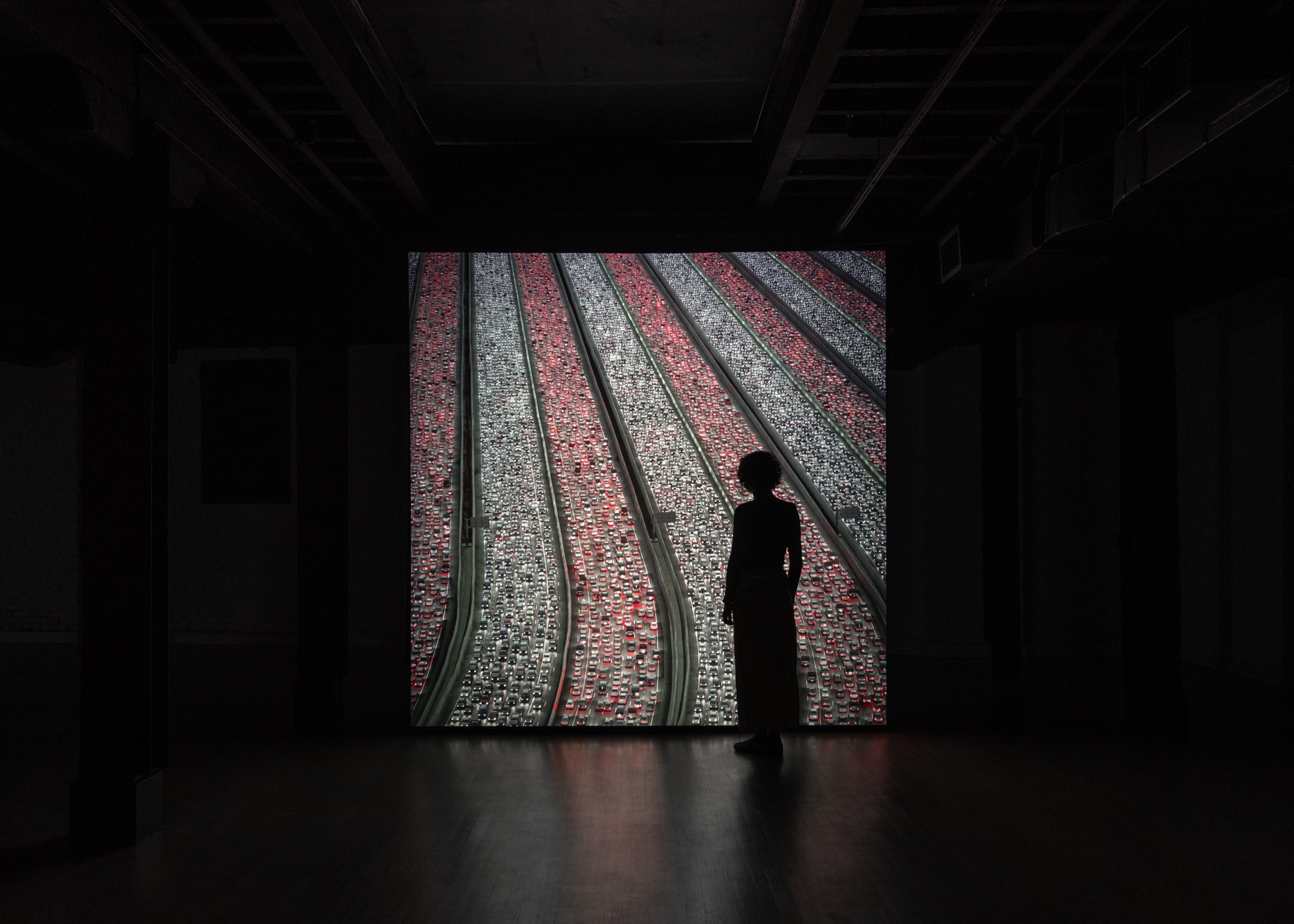 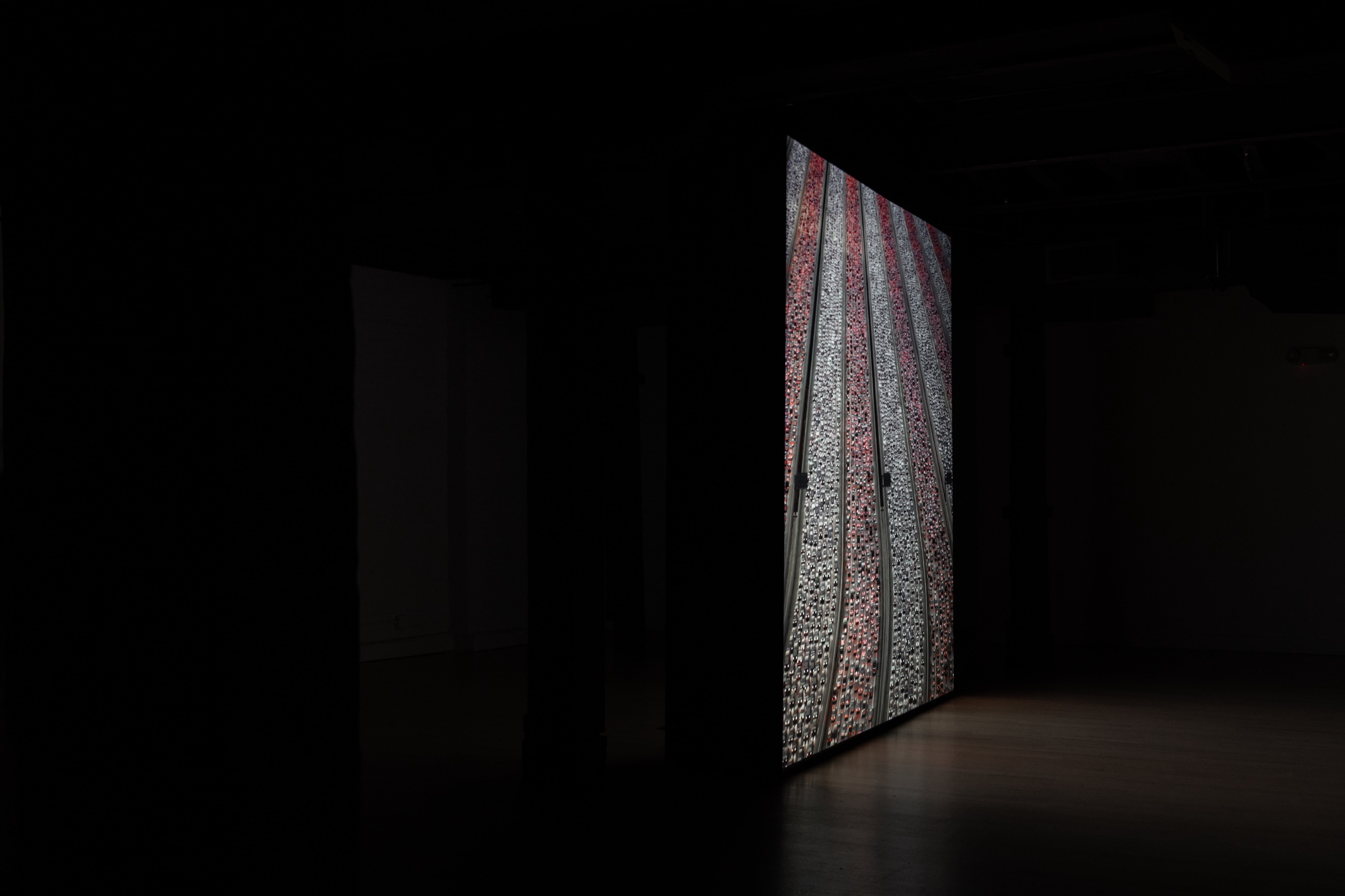 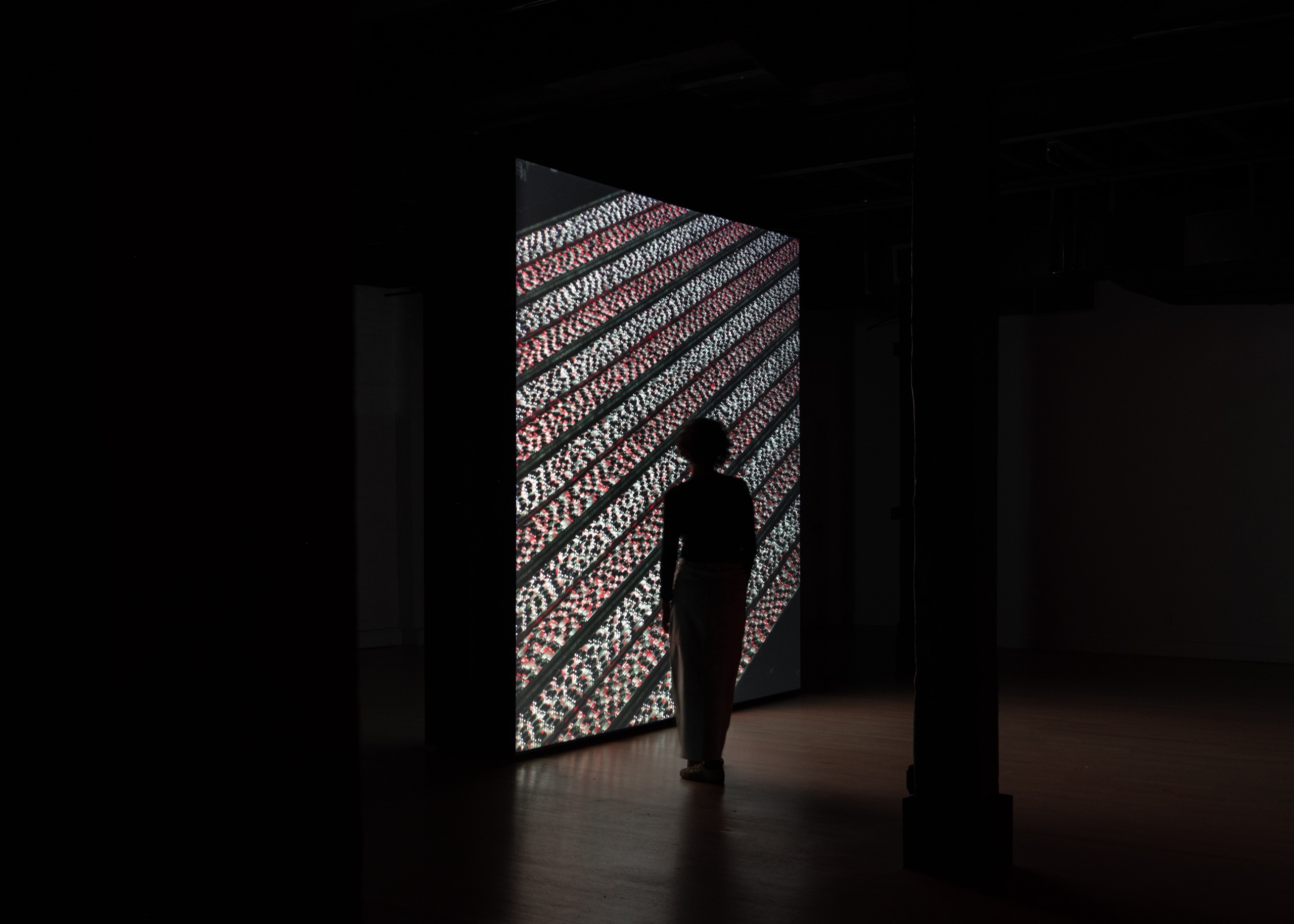 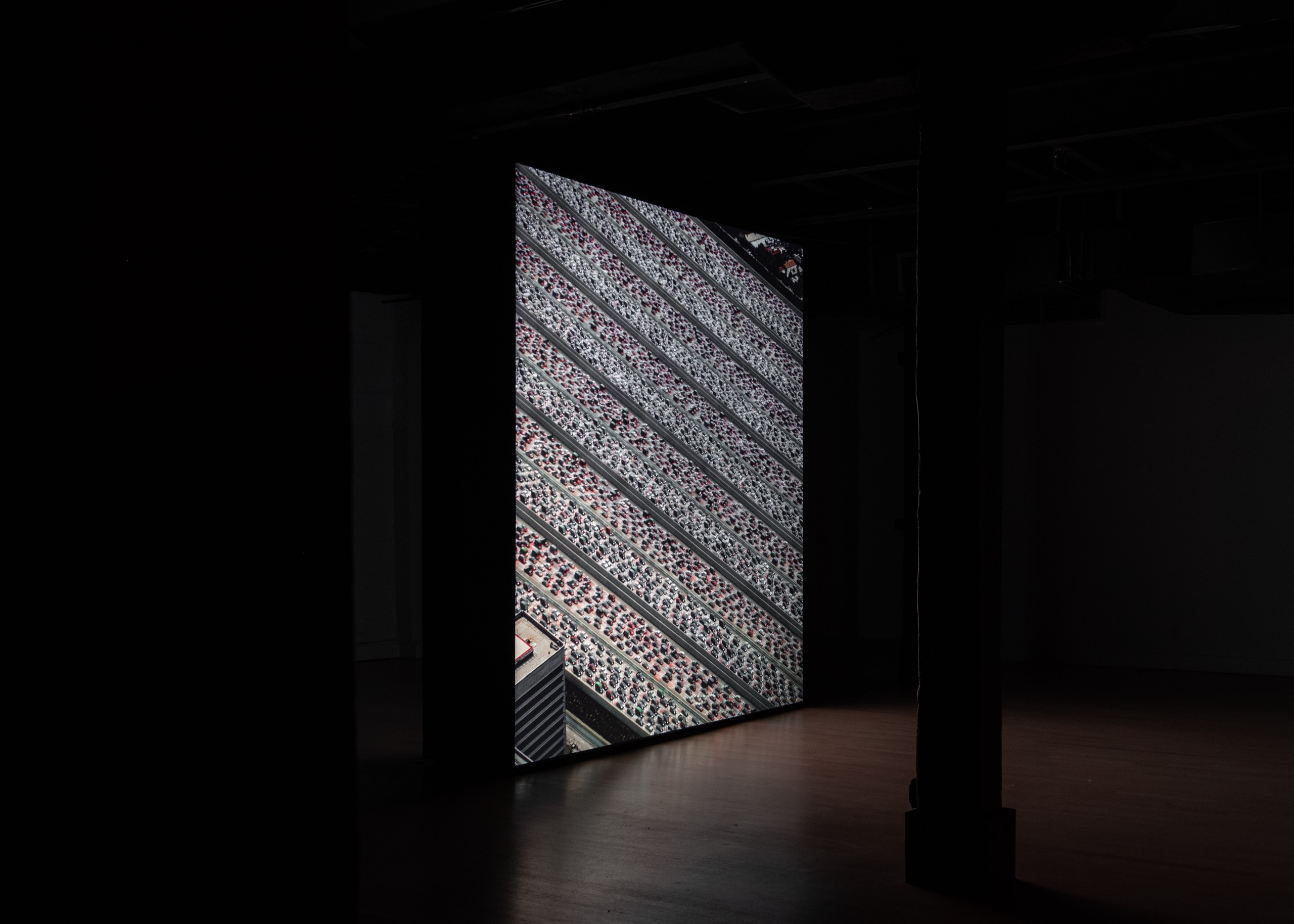 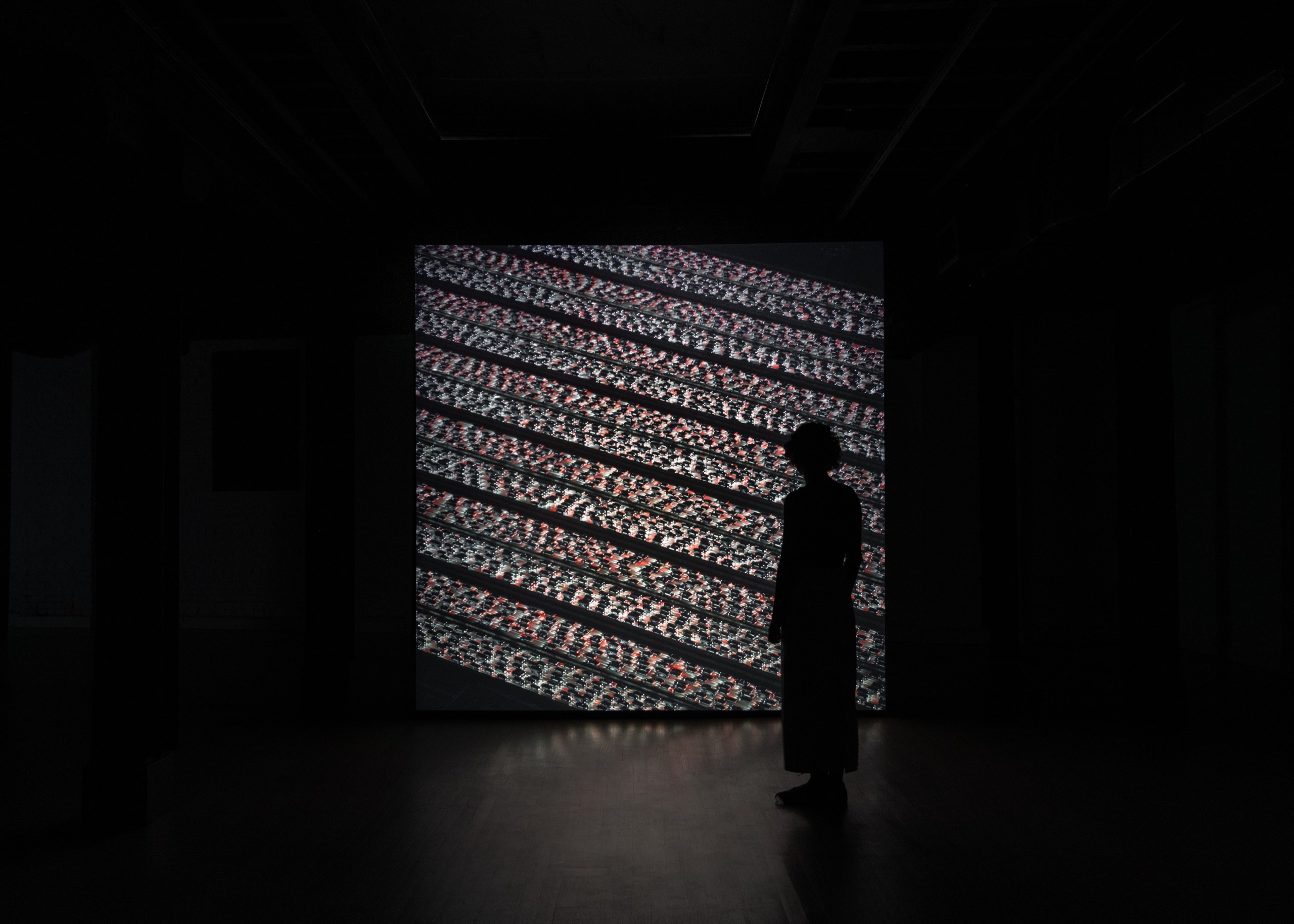 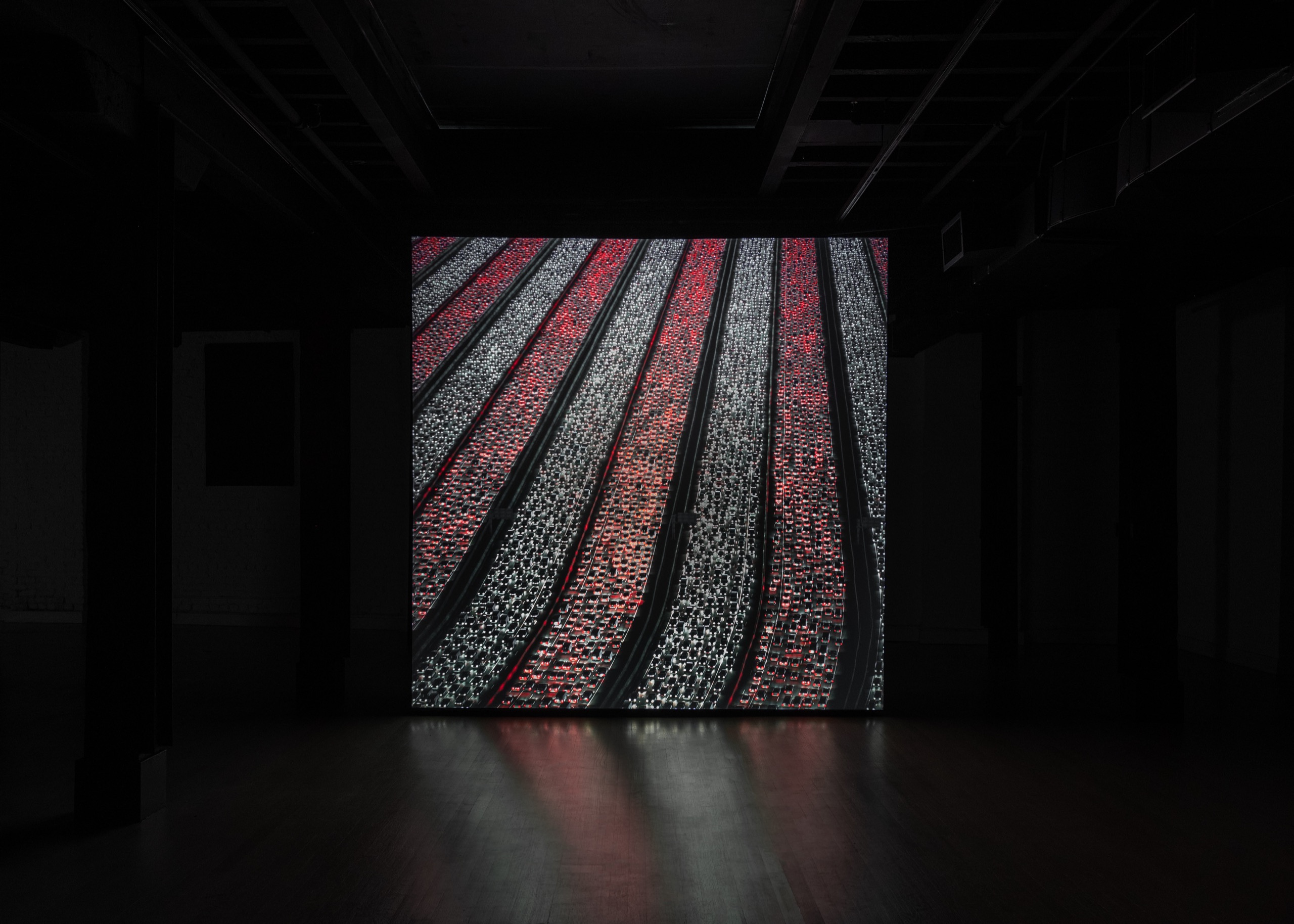 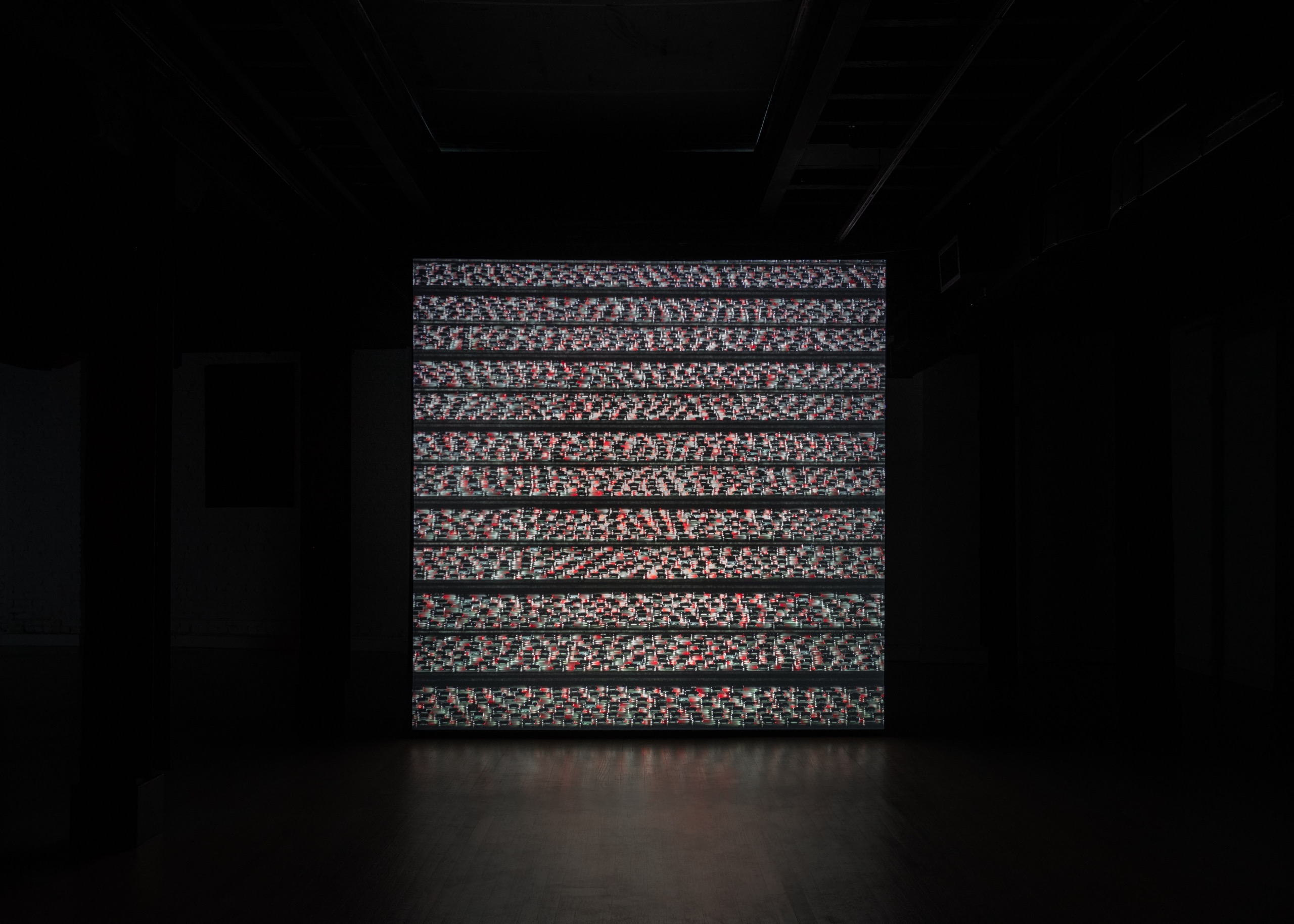 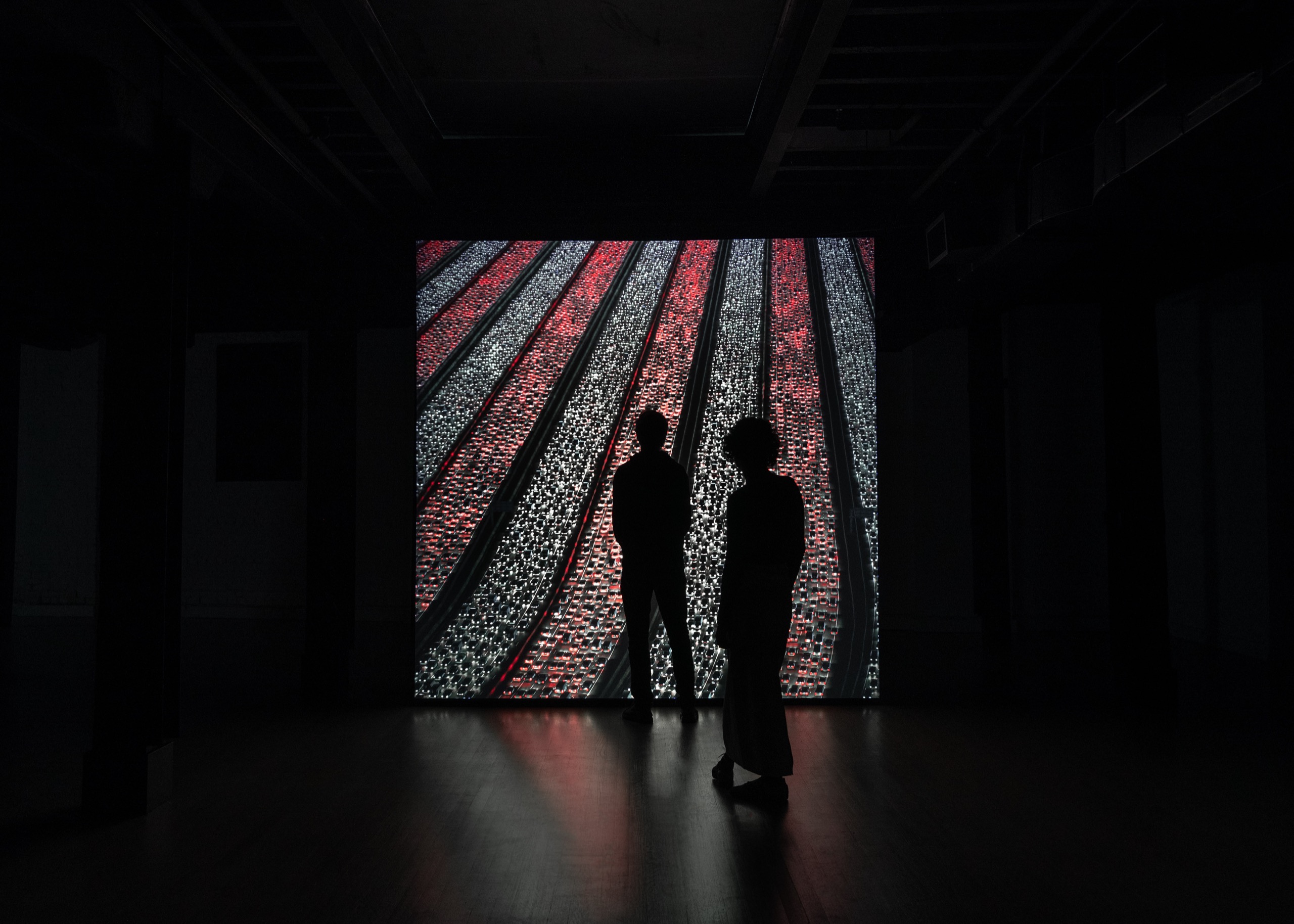 Washington DC: von ammon co is pleased to announce its seventeenth project at its Cady’s Alley location: washington.stream, a solo exhibition by Irish artist John Gerrard. The exhibition will mark the international premiere of washington.stream, a newly commissioned annual simulation, to be exhibited as a large-scale frameless projection. A second simulation titled Leaf Work will accompany washington.stream on a smaller LCD screen in the second arcade of the gallery. ​

washington.stream depicts a refractive, eternally pluralizing superhighway populated with an infinite slow flow of over thirty thousand simulated motor vehicles. Contiguous ribbons of approaching and receding freeways form uniform red and white stripes which fill the square picture plane. A solar simulation of infinite duration, the work is calibrated to its exact geo-coordinates, and its environment tracks perfectly with the movement of the sun in the sky throughout the year. Seen from a vertiginous aerial perspective that slowly scans the scene in the round, washington.stream is, formally, a light work: during the day, the scene is obscured by thick smog; but by nightfall the color field becomes bejeweled with tens of thousands of coruscating red taillights and white headlights crawling obliquely towards or away from the viewer.

Gerrard modeled the traffic simulation using the manifold contours of human emotions on display while driving. As one approaches this atmospheric color field, one can locate individual cars and trucks working their way through the traffic using an emotional traffic algorithm distributed into several behavior groups—the altruistic, the realistic, the selfish, and the malicious—which direct the stream of movement as individual data points forming a totality. The cause of this massive transfer of bodies is unknown—a routine rush hour, a highway accident, or even a massive exodus triggered by war or disaster—but its universality finds purchase in a multitude of media tropes. Unlike most traffic, however, the backup is bilateral and constant, thus abstracting the work from any fixed reference to time or narrative. washington.stream is about traffic with no cause or referent: a dream of displacement and alienation, or a nightmare of waste.

washington.stream not only speaks to the unstoppable metastasis of planet-killing infrastructure, but to how national sovereignty is not only imbricated with labor but with the means to access or produce (or extract) energy. The stream represents the hematic flow of workers and consumers through a nation’s circulatory system: if contemporary American Society is predicated on and subtended by such a notion of mobility—and the accompanying political imperative to keep gasoline prices so relatively low—can one imagine a realistic alternative? washington.stream premieres at a moment in history where the synthetic dream of the open American expanse is being very acutely challenged by the reality and precarity of neoliberal capitalism and its complicated relationship with diplomacy. ​

While washington.stream alludes more to the metroplex than to the beltway—its source material is based directly on Highway 405 in Los Angeles—the premiere of the work in the nation’s capital is a means to originally embed the work into a discussion of international diplomacy; how this relates to a nation-state’s relative proximity to or engagement with petro-energy; and how this fundamental and deadly ingredient shapes not only the balance of world power but the lives—and fates—of those within a certain set of borders.

John Gerrard (b. 1974, N. Tipperary, Ireland) is considered a pioneer of simulation within contemporary art. His annual softwares are in the collections of MoMA, Tate, SFMoMA, LACMA, Pinault Collection, Ullens Foundation, M+, Pinakothek der Moderne, and TBA21, among others. Recent projects include Mirror Pavilion, originally commissioned for Galway International Arts Festival 2020 to include screenings of Corn Work and Leaf Work; and subsequently inclusions in the Sydney and Gwangju Biennials.

The artist and von ammon co would like to thank Scott Hoffman, the commissioner of washington.stream.