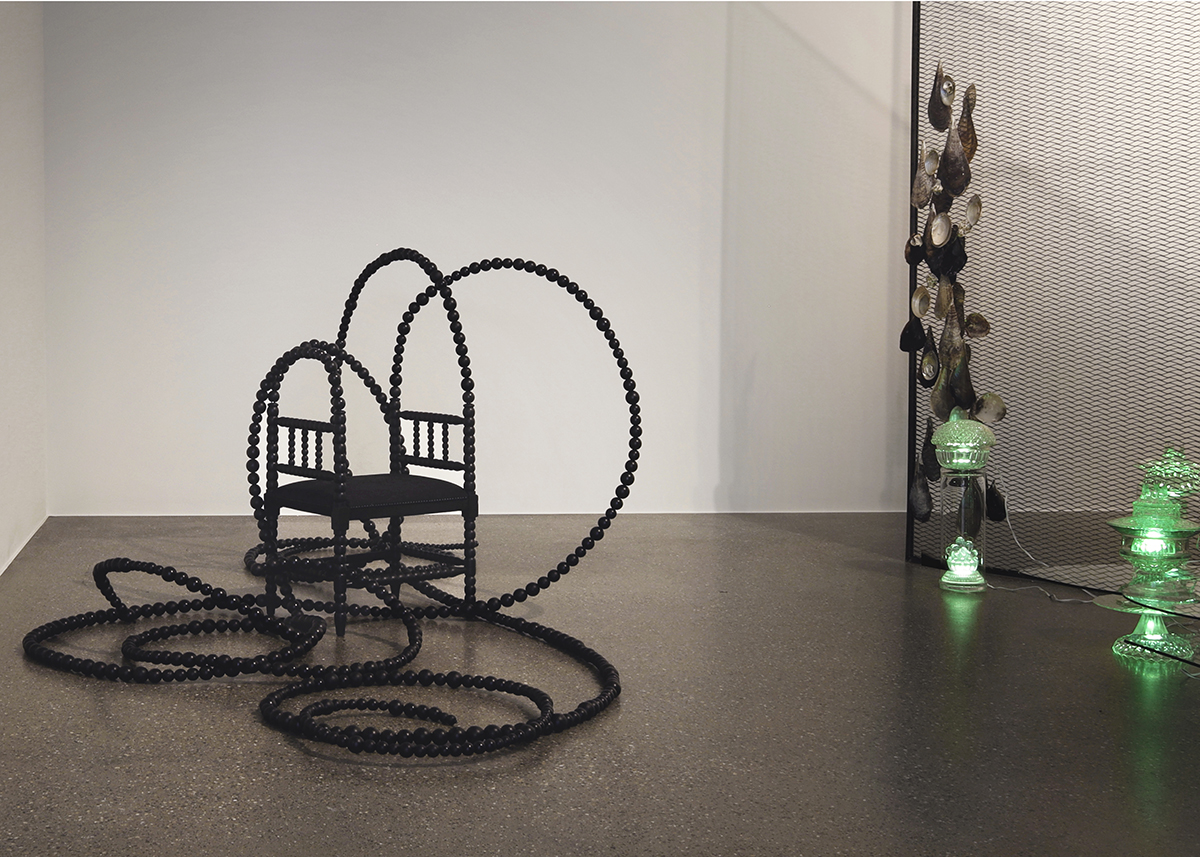 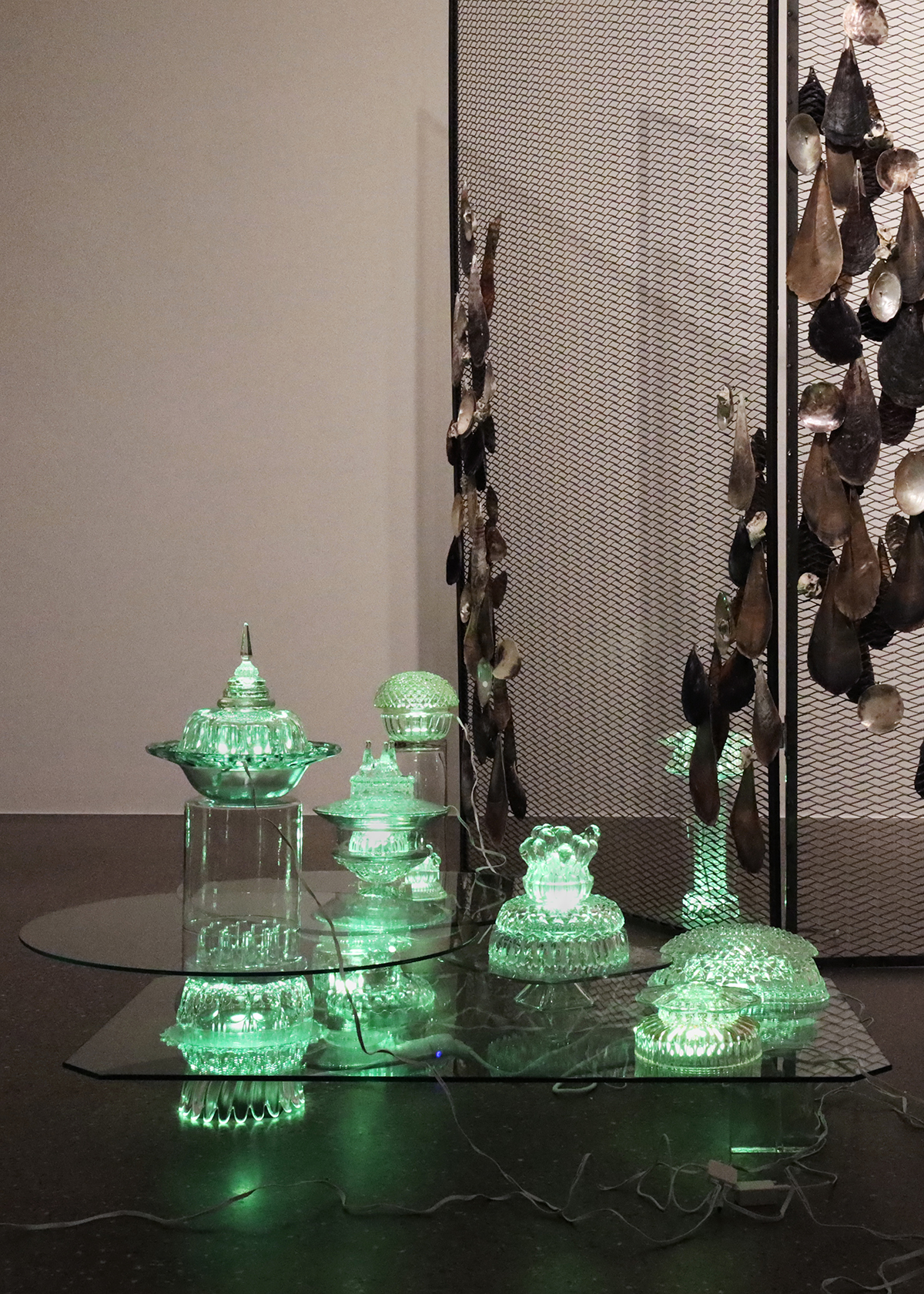 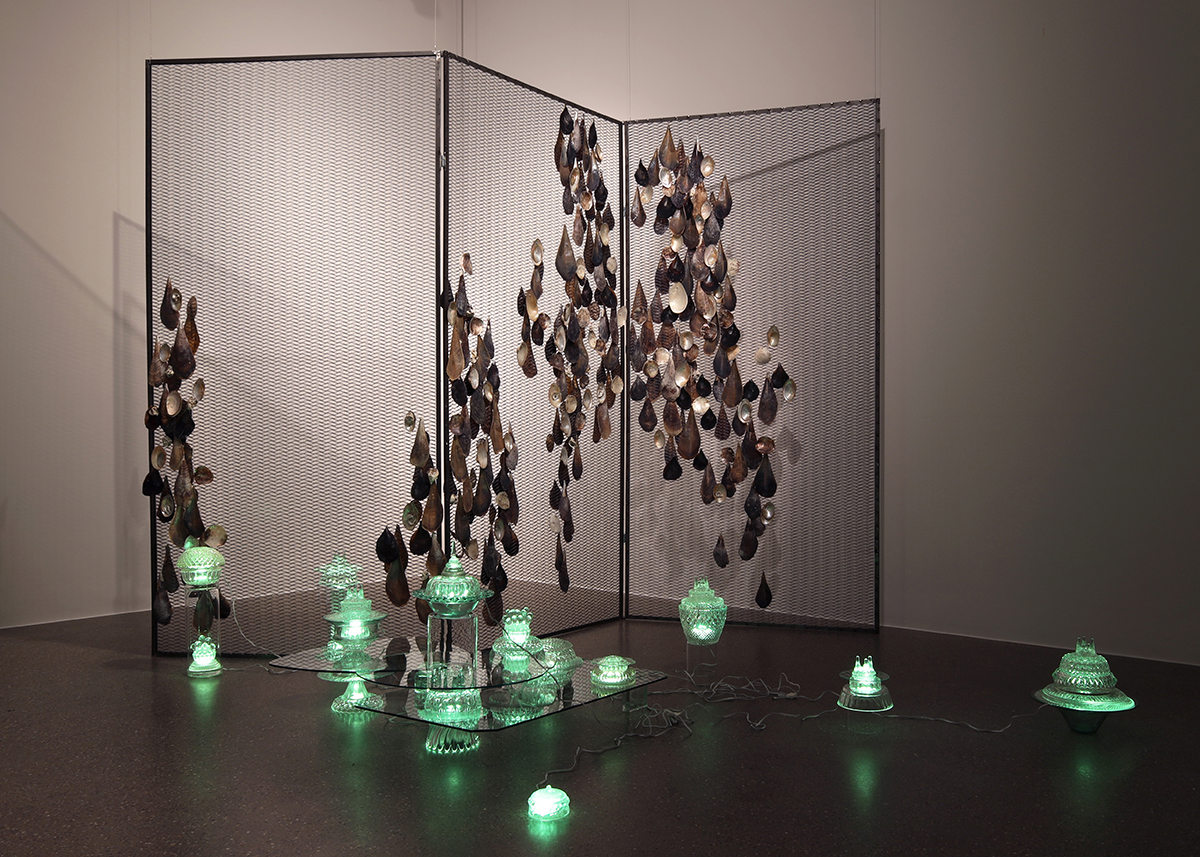 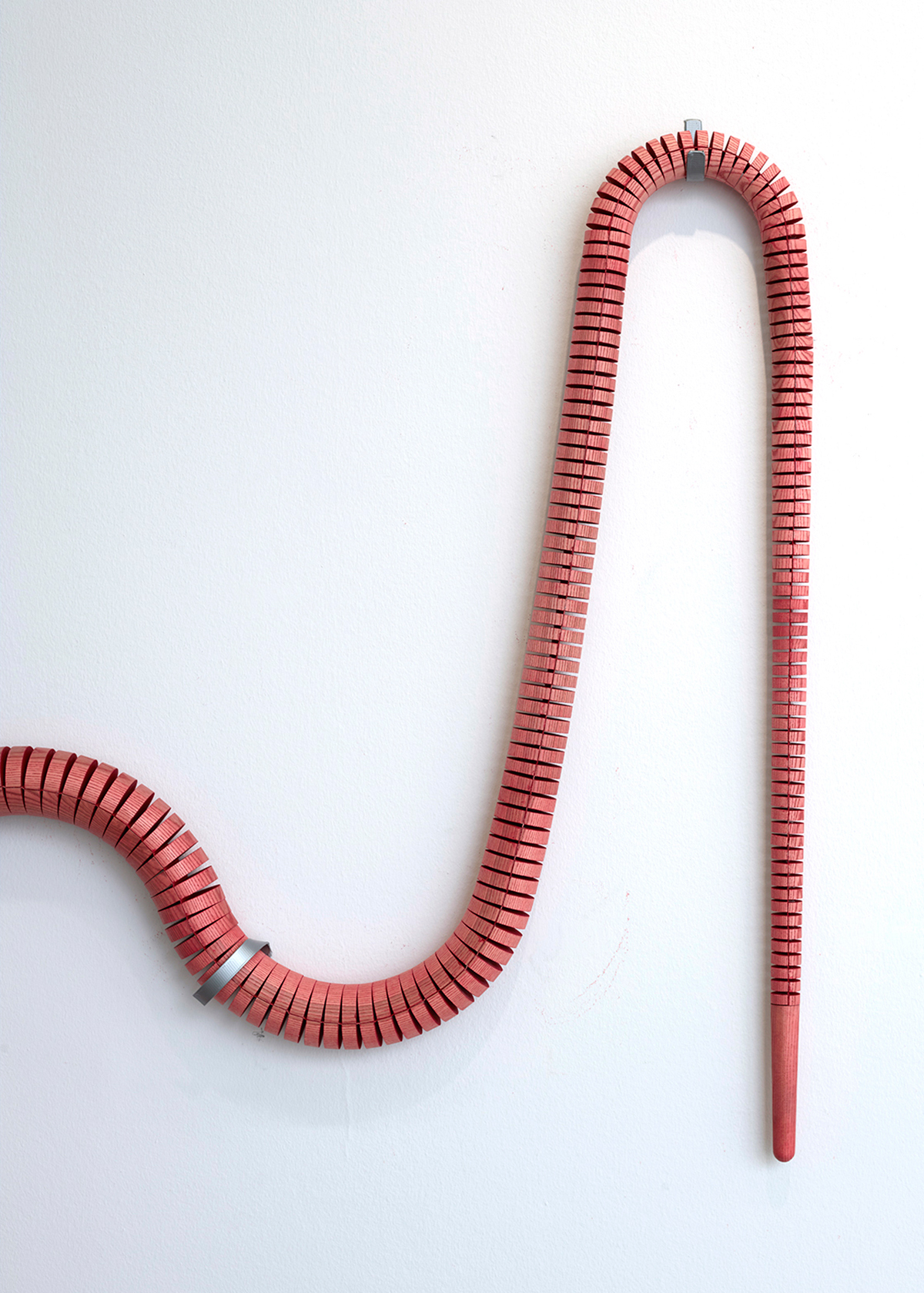 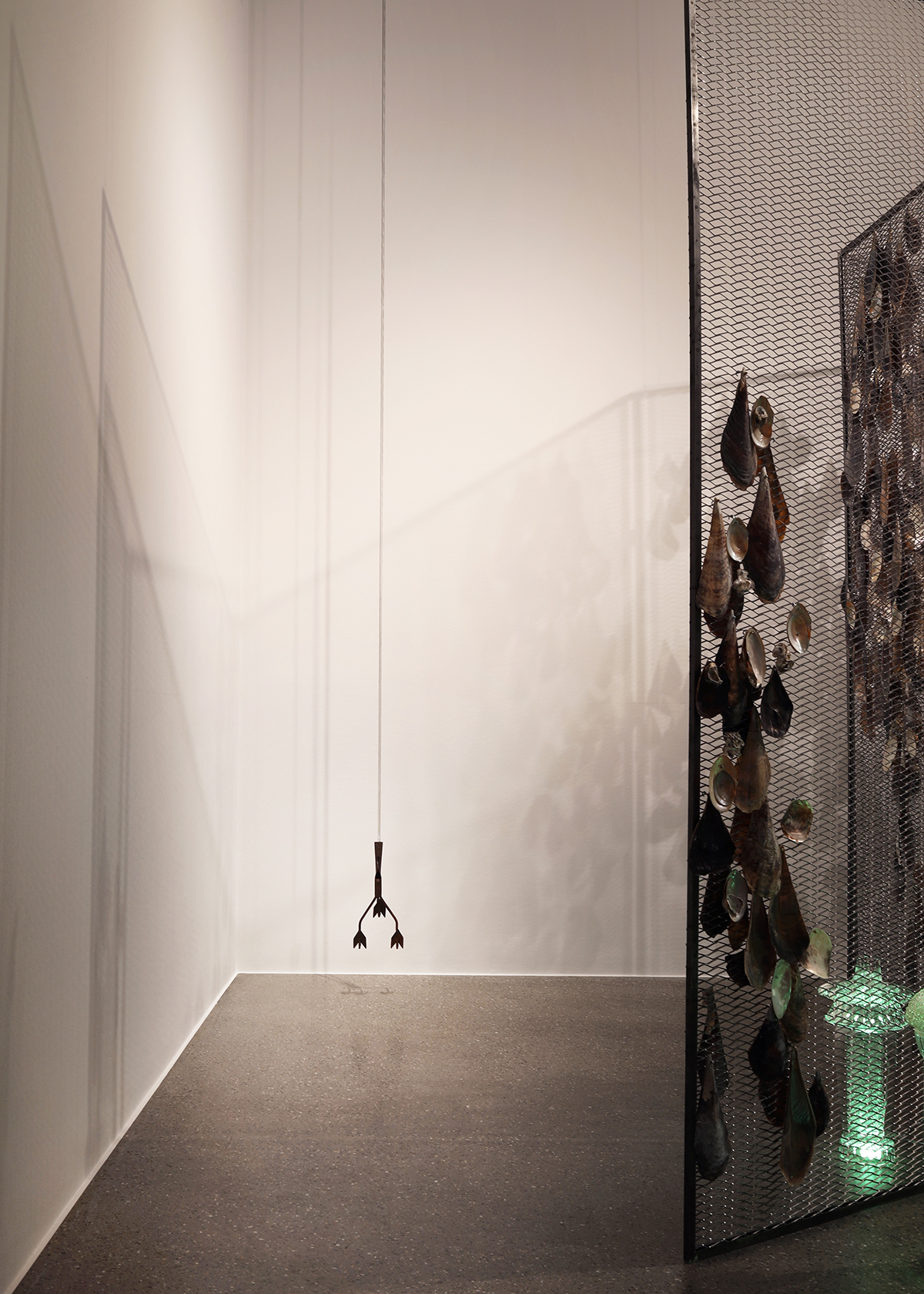 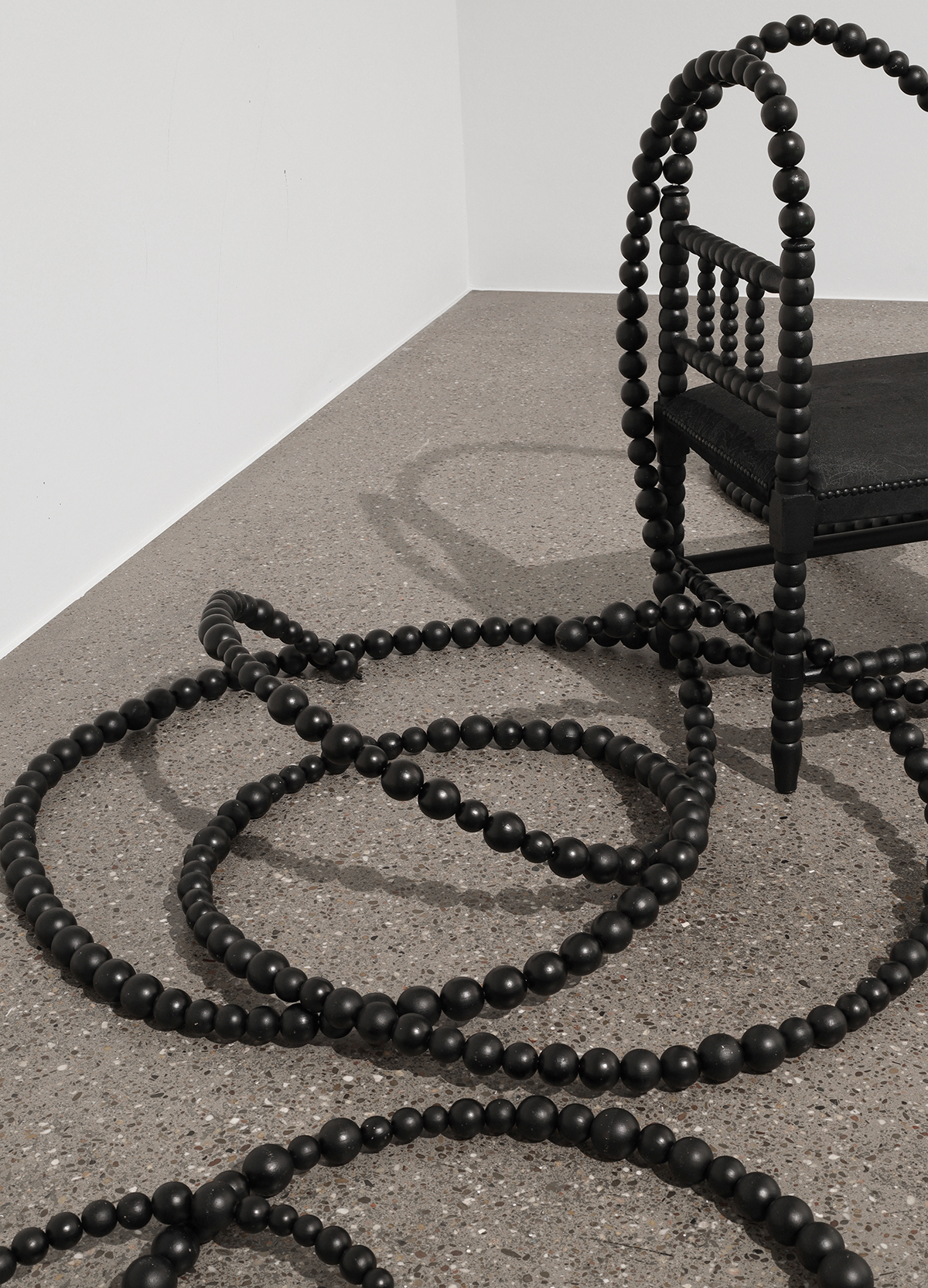 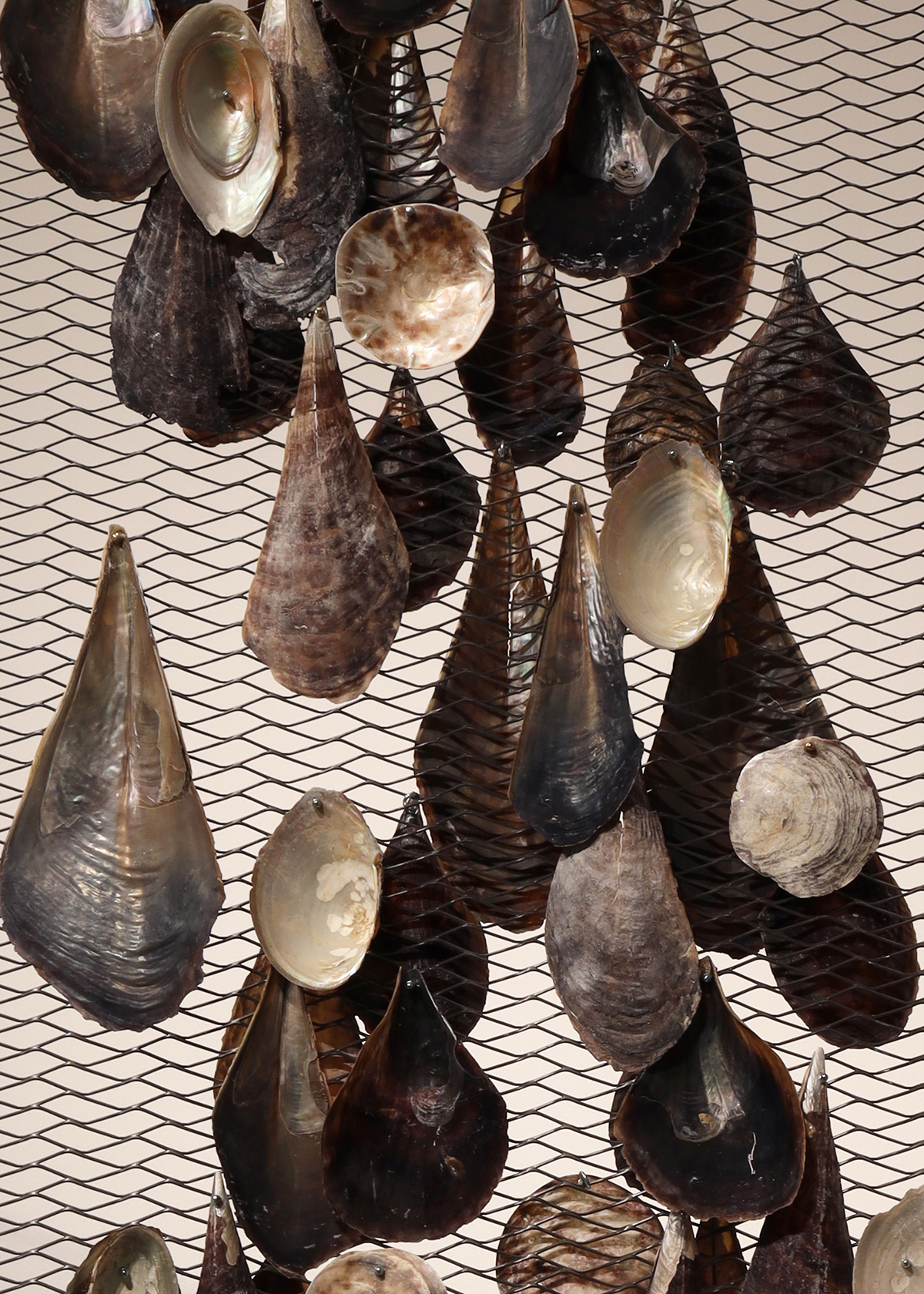 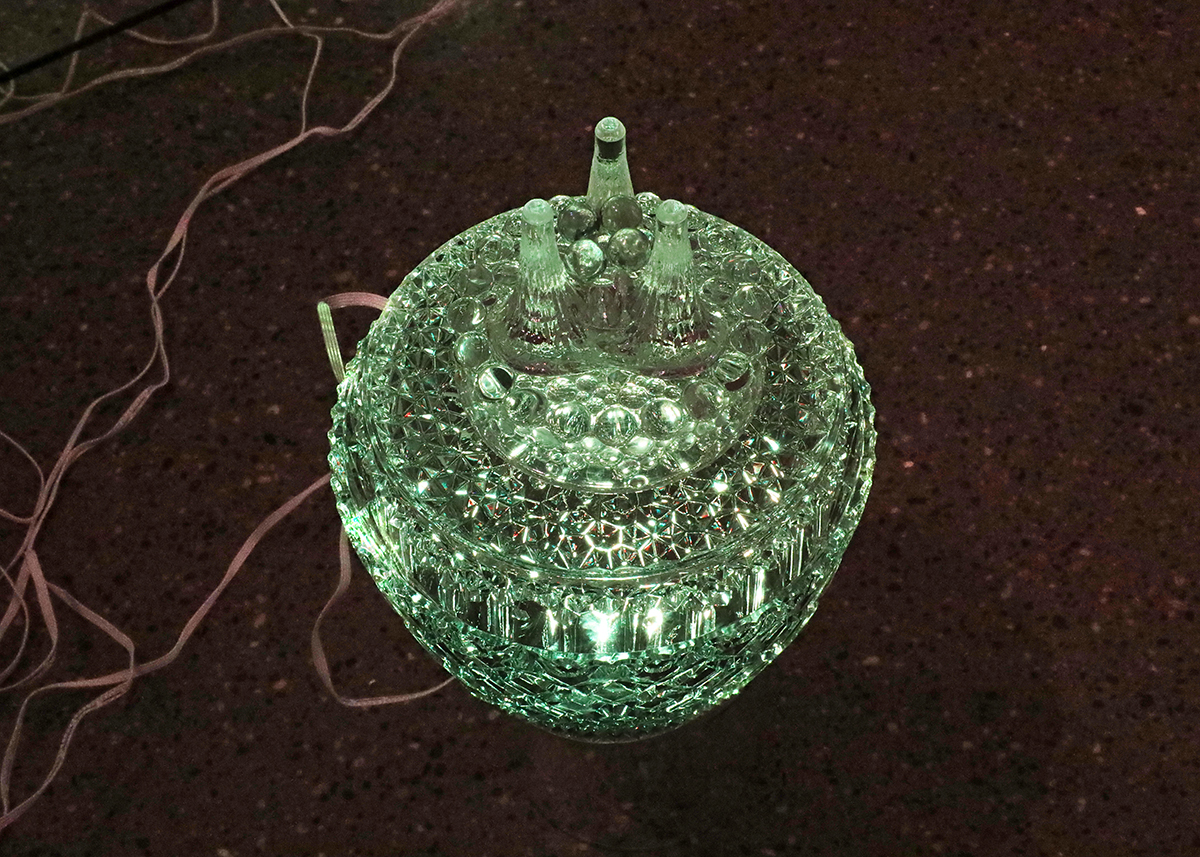 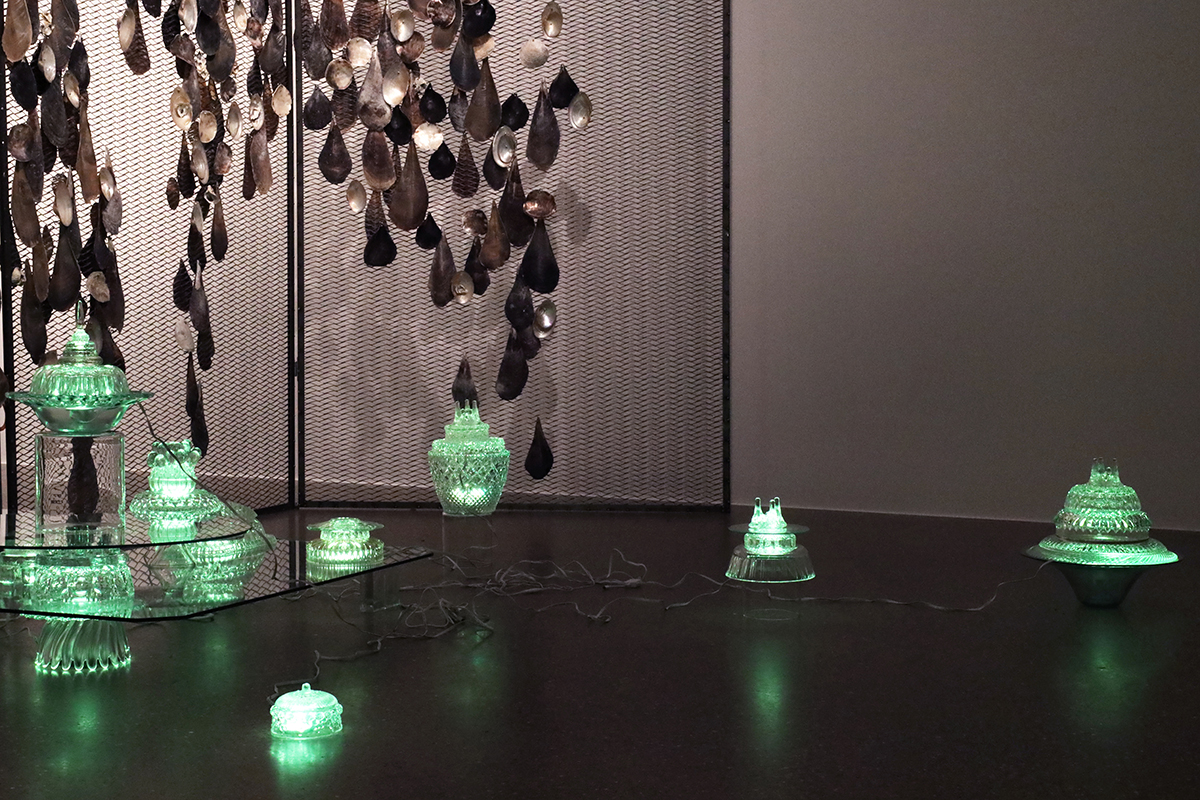 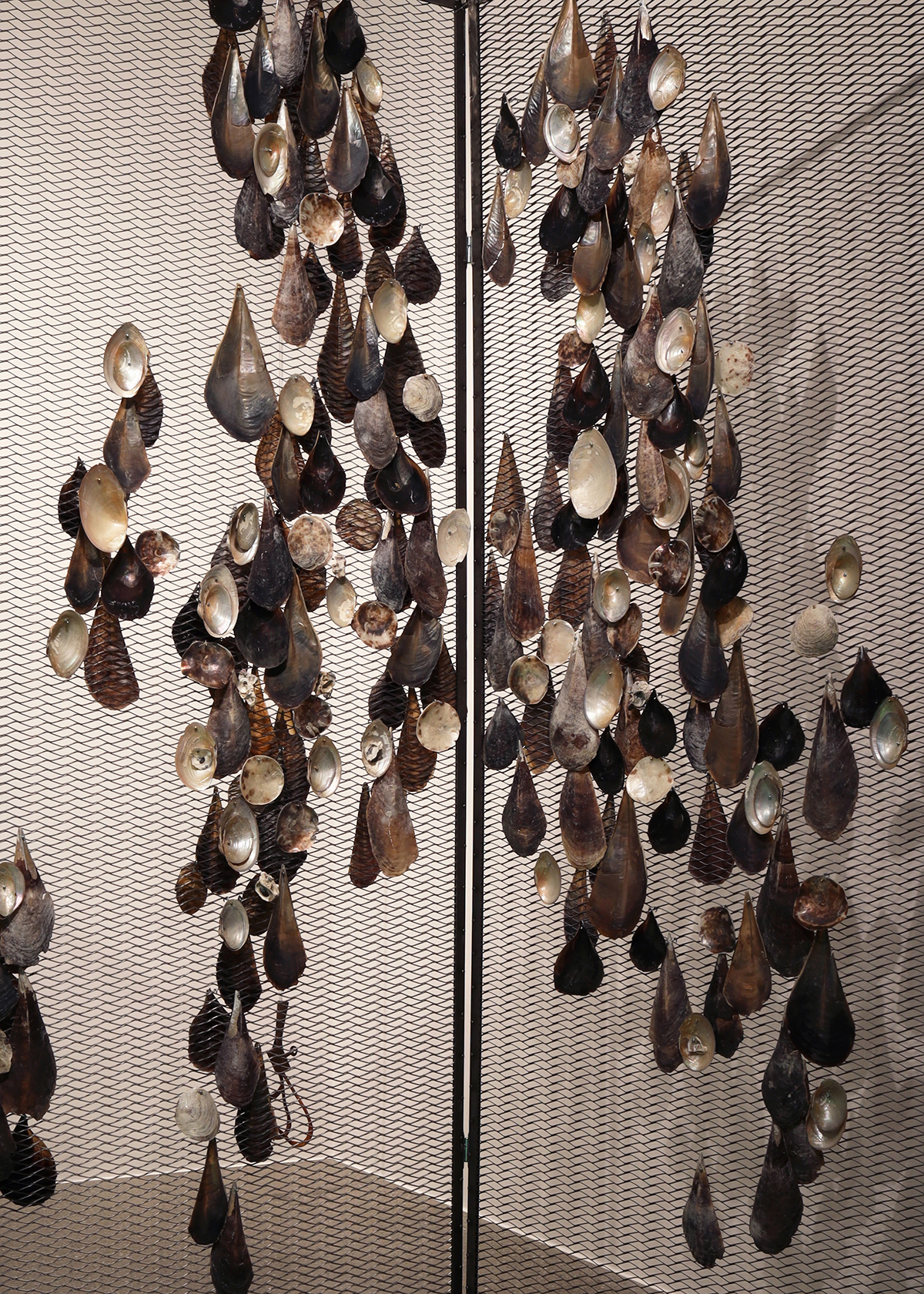 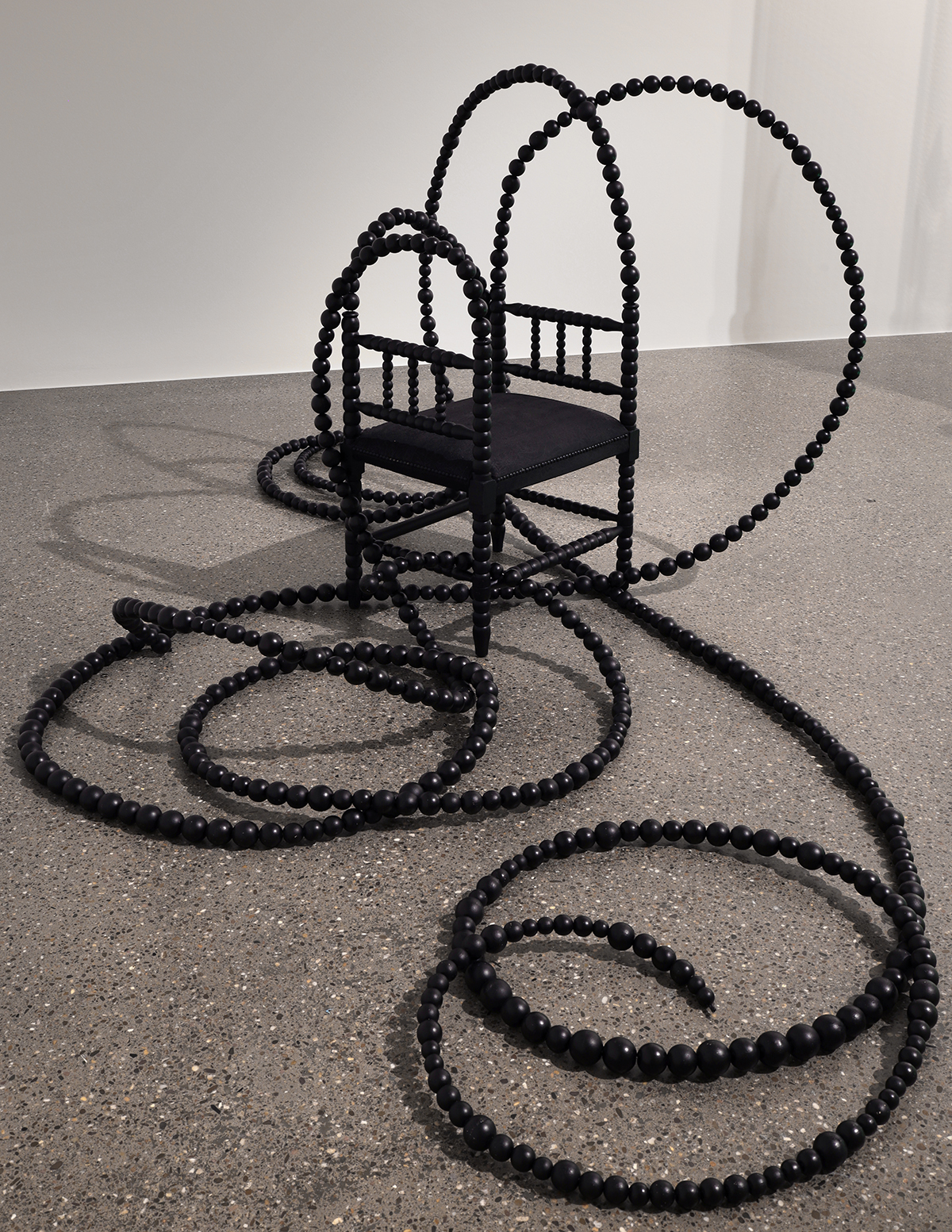 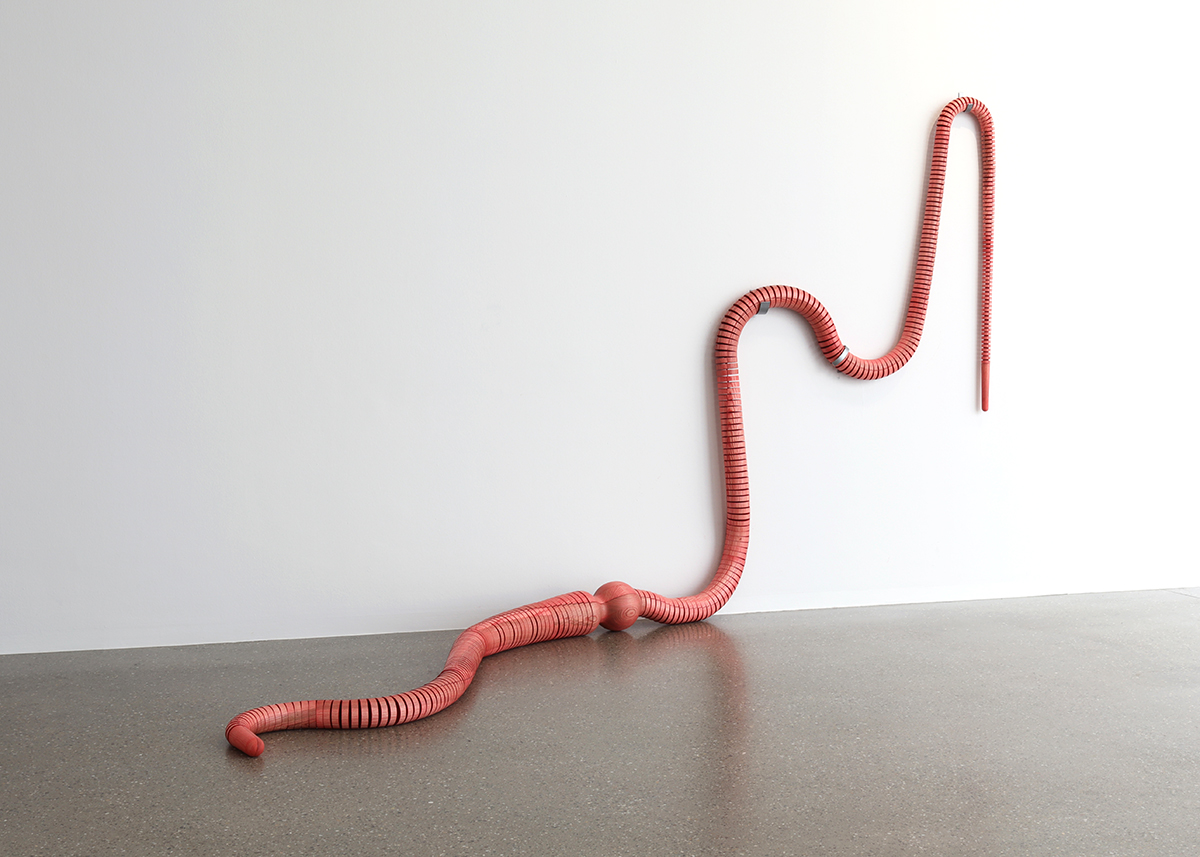 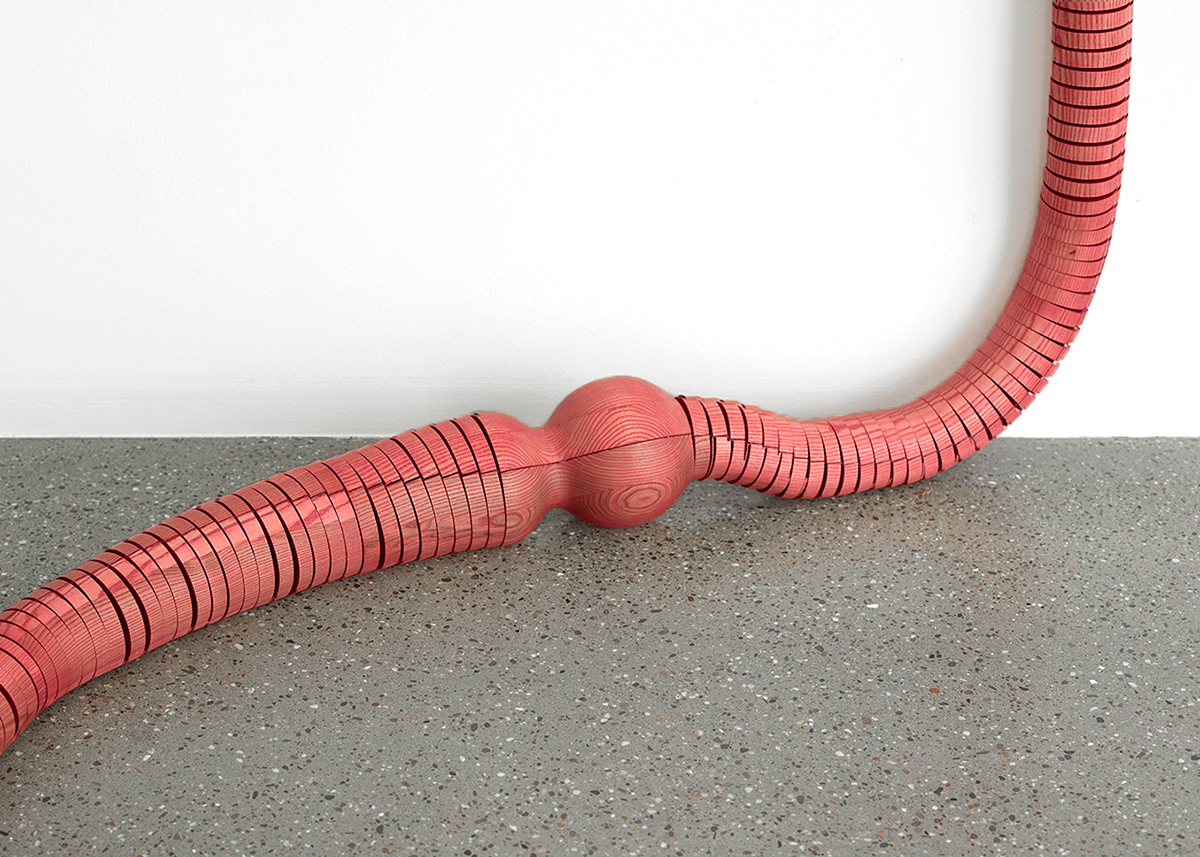 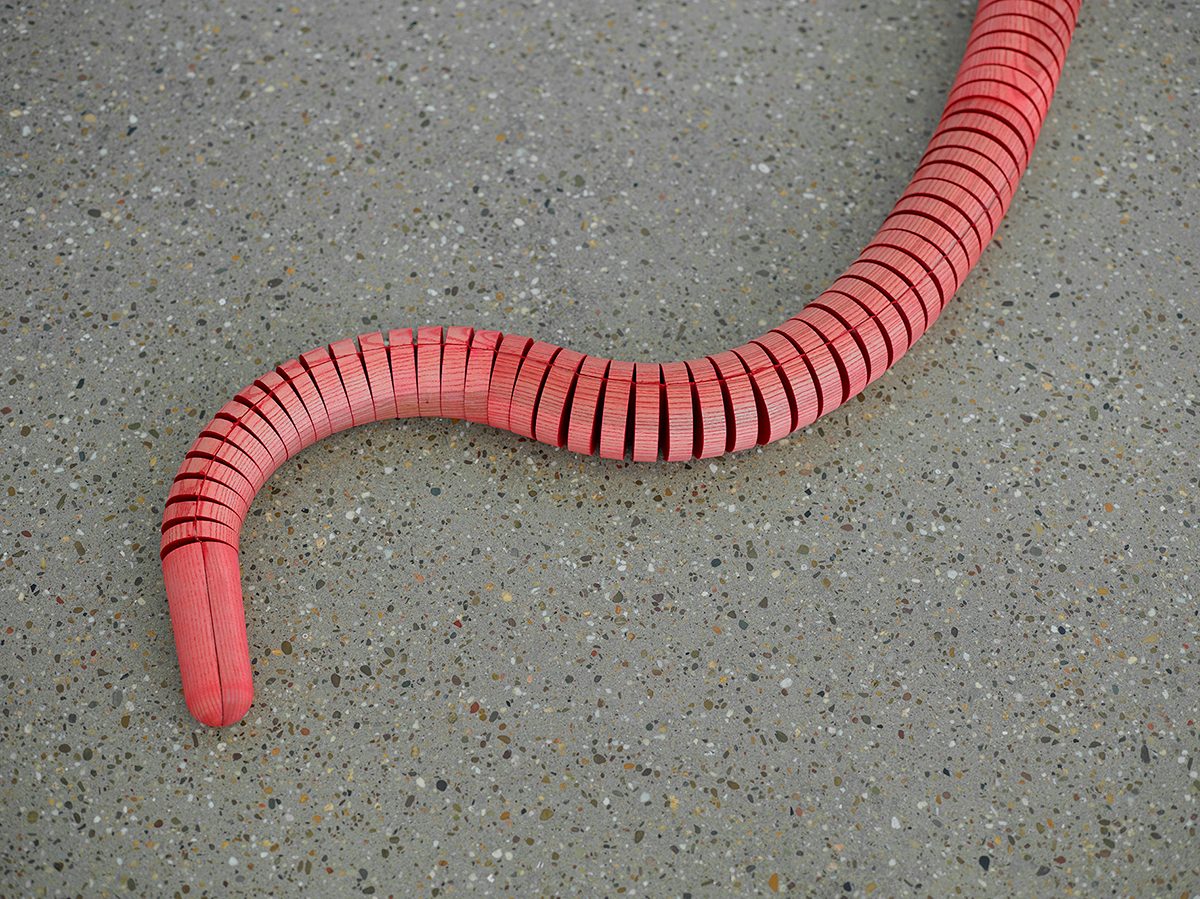 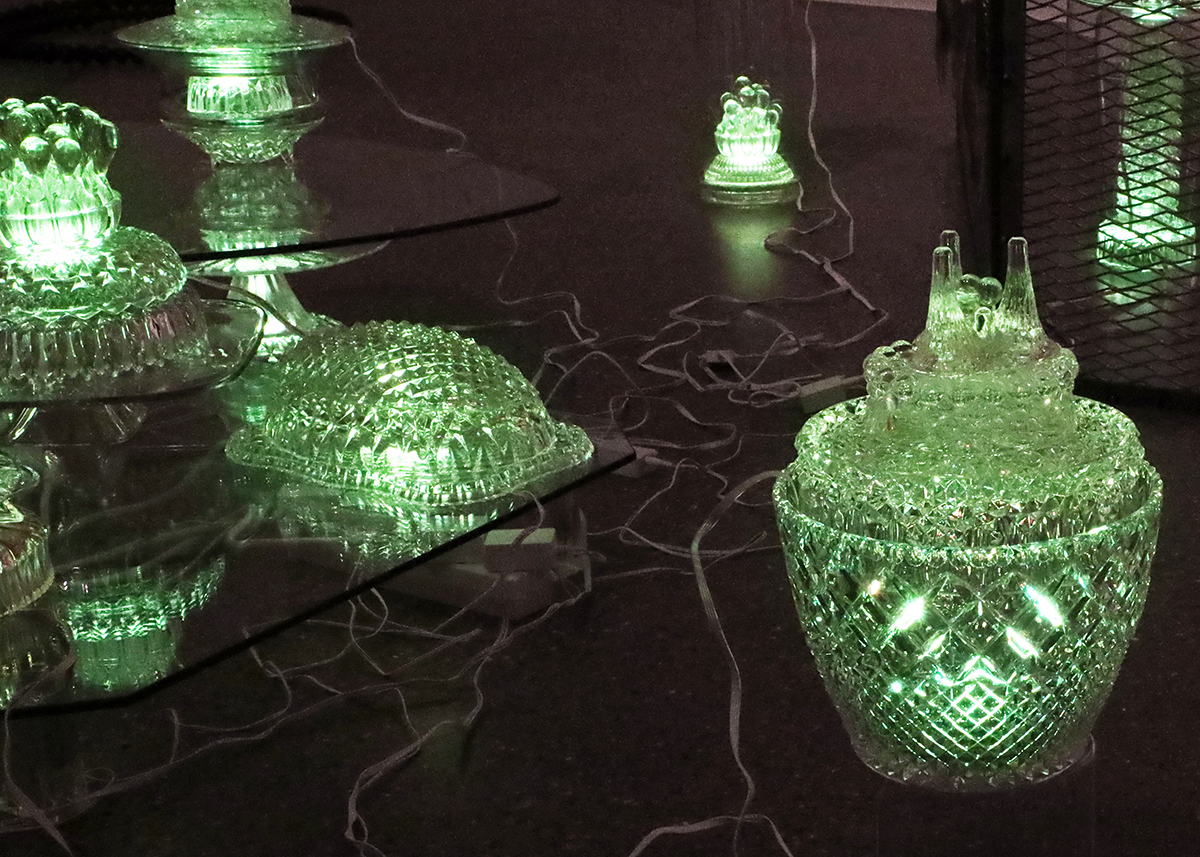 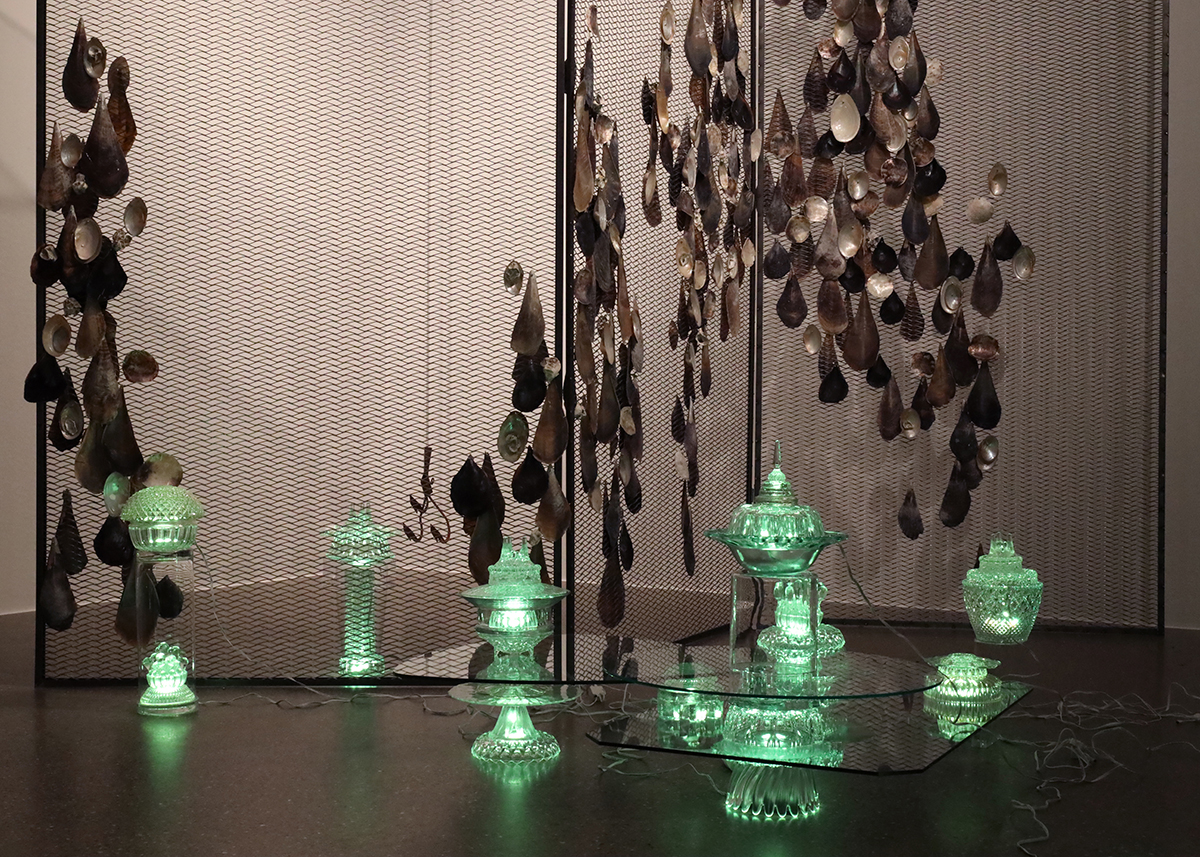 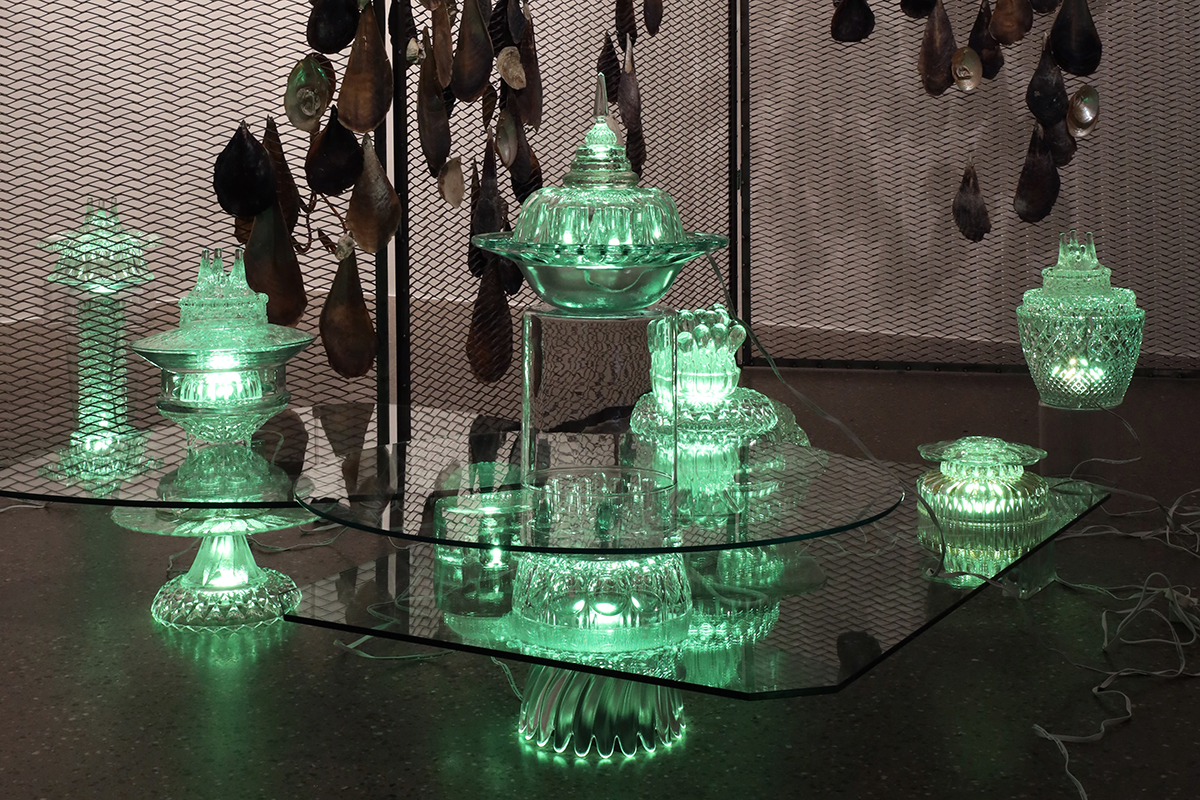 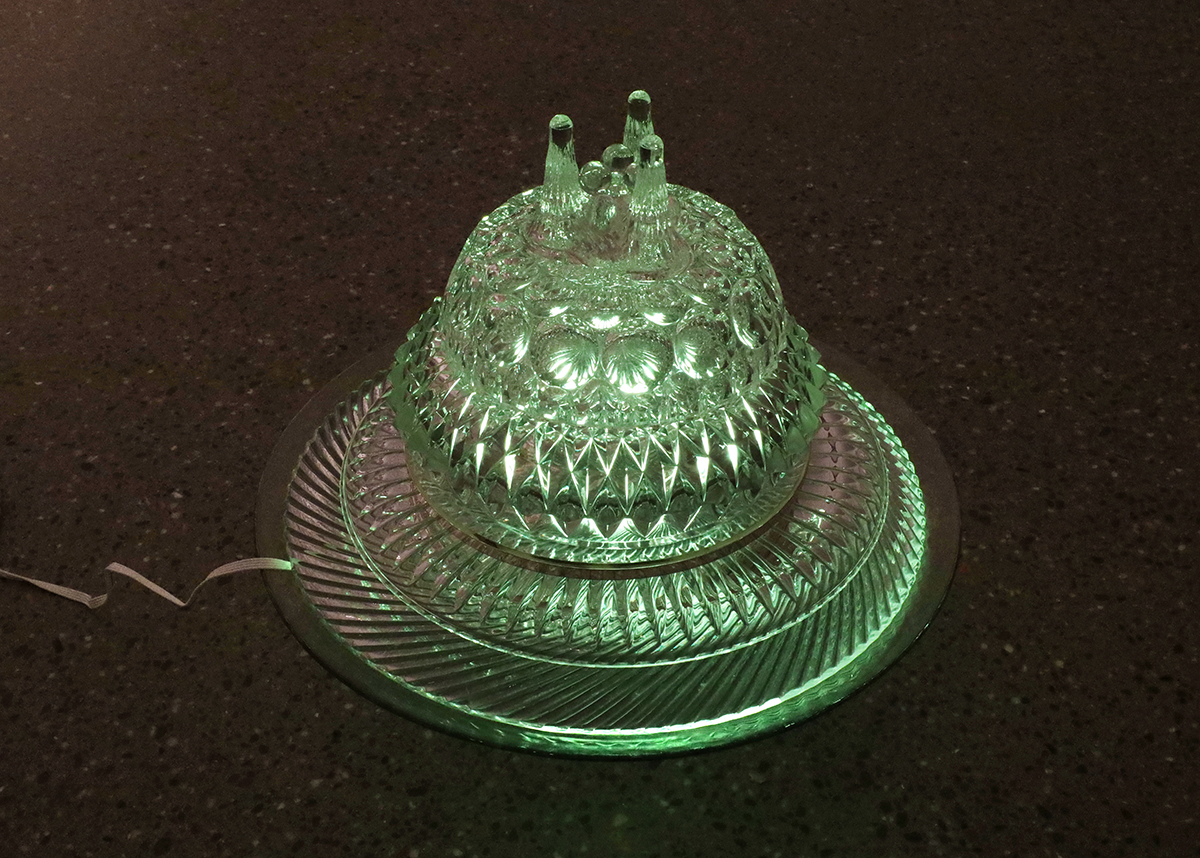 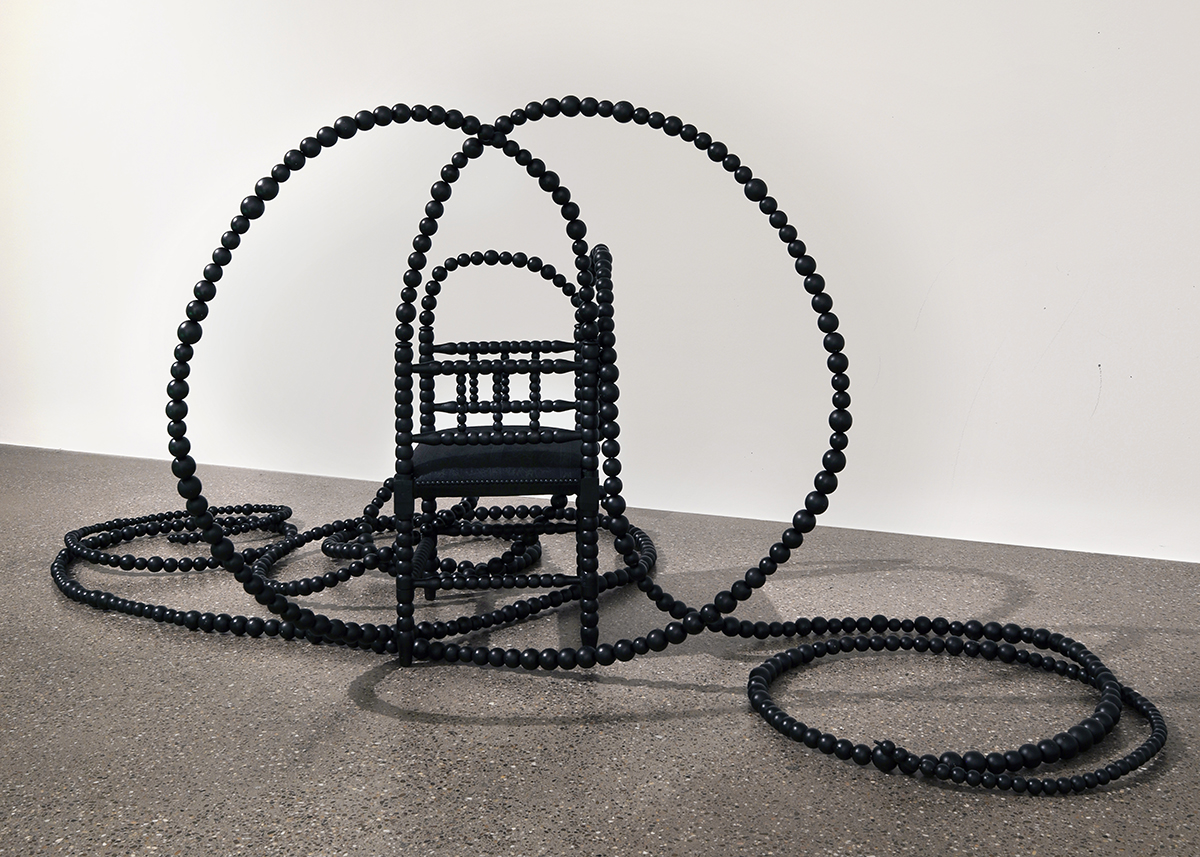 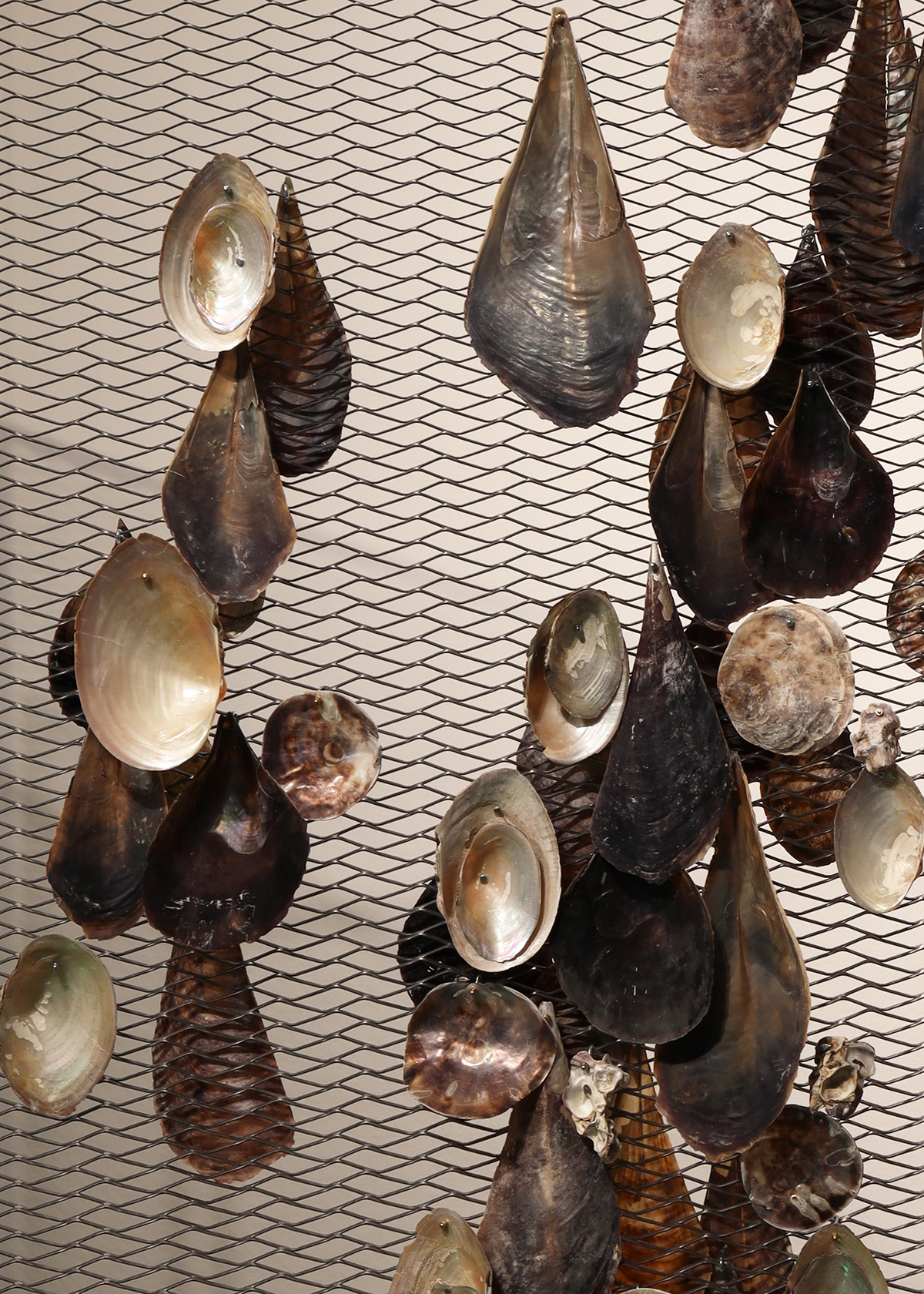 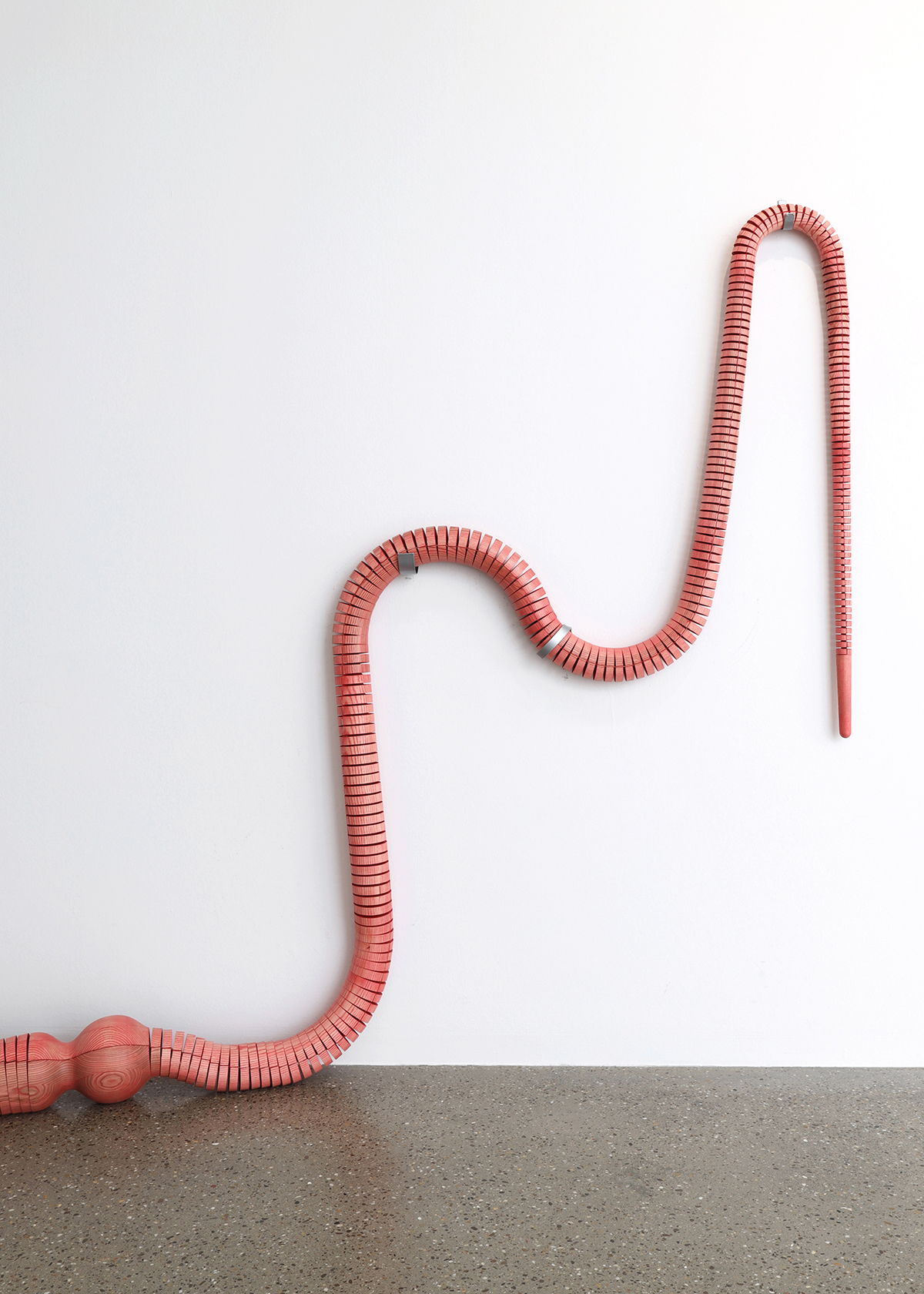 For her new exhibition at Museum Folkwang, Hammari presents sculptures that deviate from her typical series format, sitting instead as a group of individuals in the room. The sculptures reference furniture forms, together transforming the exhibition space into an uncanny domestic interior. In one sculpture, long, swirling tendrils spring from four corners of an upholstered, backless chair, spilling onto the floor. The tendrils are strung with circular beads that resemble oversized pearls. The piece is painted in a monochromatic black, making it difficult to tell where Hammari’s intervention ends and the found object of the chair begins.The sculpture has its own sense of liveliness, at the same time that it implies an absent body, one who might have occupied the chair at some point. In poet Lisa Robertson’s short essay on Eugène Atget’s photographs of fin de siècle, Parisian interiors, she describes the way a furnished room is inscribed by those who use and move through it; »By ›furnishing,‹we also mean surfaces as they index and influence our wandering transit. Furniture, or composed surface, is transitive. It is structure for touch or approach.« The swirling tentacles springing from Hammari’s chair read almost as traces of the »wandering transits« around it, exaggerated trails of a body in motion. The tendrils also seem to emerge from an excess within the chair, as if its own materiality couldn’t be contained within a static form. This overflow of energy contrasts with the gravity that a chair projects onto the body as a place to rest, to sink in. Given its overflow, the sculpture no longer invites »touch or approach«, asRobertson says. But its surfaces still carry a direct relationship to a body or a user, creating a tension between form and function, material and use.

These sculptures expand their focus from the body of the sculpture, or the artist, and out into the domestic space. A metal mesh folding screen, adorned with mussel shells bisects the room. These types of room dividers, while sometimes translucent, typically block one’s view and are often used for privacy. But Hammari’s sculpture is made from an open metal mesh. Instead of partitioning the room into private spaces, the divider seems to mark a movement through it. Like the chair, the screen also refers to a body, but instead of indexing touch and use, it indexes movement and visibility, one’s »wandering transit,« as Robertson says. These types of shells are used in decorative inlay for their pearlescence, but appear in Hammari’s sculpture in their raw form, hung on the screen in lush cascades. The shells appear fragile and gentle against the industrial steel they hang on. The divider marks not only a physical path through the space, but also a way of looking through, at and around the other objects in the room — through a screen of material contrast.

The objects we live with are not all for the body to rest on, to move around, or to use. Some are for decoration and for beauty, meant to reflect the pleasures of the person living among them. Alongside the chair and the screen, Hammari shows a small series of sculptures made from stacked crystal objects with an eerie green light glowing through the multi faceted and varied forms. »Yet by ›furnishing,‹ we mean something additional to the customary mobilia — bed, shelf, curtain and so on,« Robertson writes. »We mean also the way a room and person compose an image of time, through a process of mutual accretion, exchange, erasure, renovation and decay.« Furnishing, as Robertson draws out so beautifully here, refers both to the objects that we live with, and to the accumulation of objects and experiences that result from the process of living in a space. The cut crystal forms recall kitschy home decor with their ambivalent relationship to value; at once signifying something luxurious, while actually being quite ubiquitous and inexpensive. The exhibition’s title, Après moi, le déluge, seems to refer to the way an objects’ meaning can shift following a person’s death.What was once a personal index of accumulated memory and experience becomes a flood, an overwhelming, unwelcome and undifferentiated mass of things. The crystal stacks with their otherworldly glow, point to the self within the furnishings. The objects become the outer layer in the shell game, and one’s personal investment in them the concealed contents, fragile and contingent.

An excerpt from "The Uncanny Content of a Shell Game: On Hanna-Maria Hammari’s Sculptures" by Marina Caron