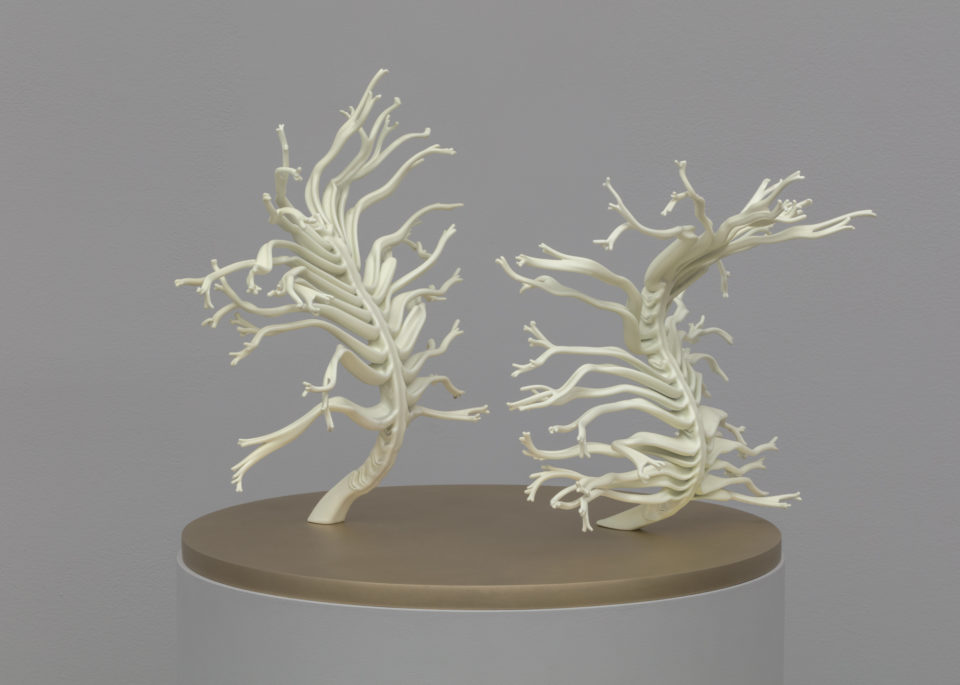 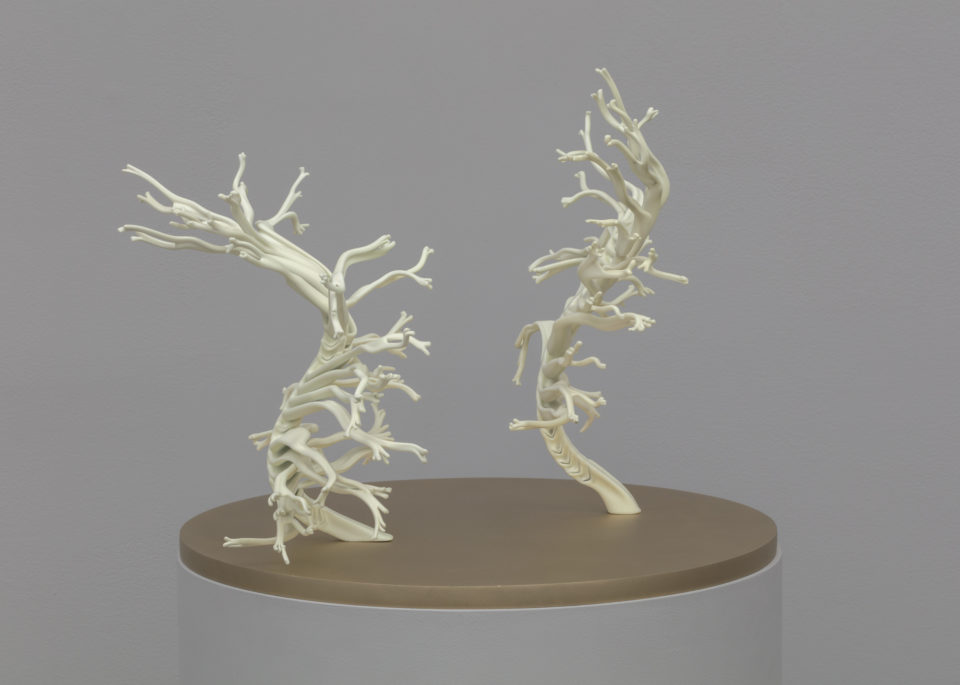 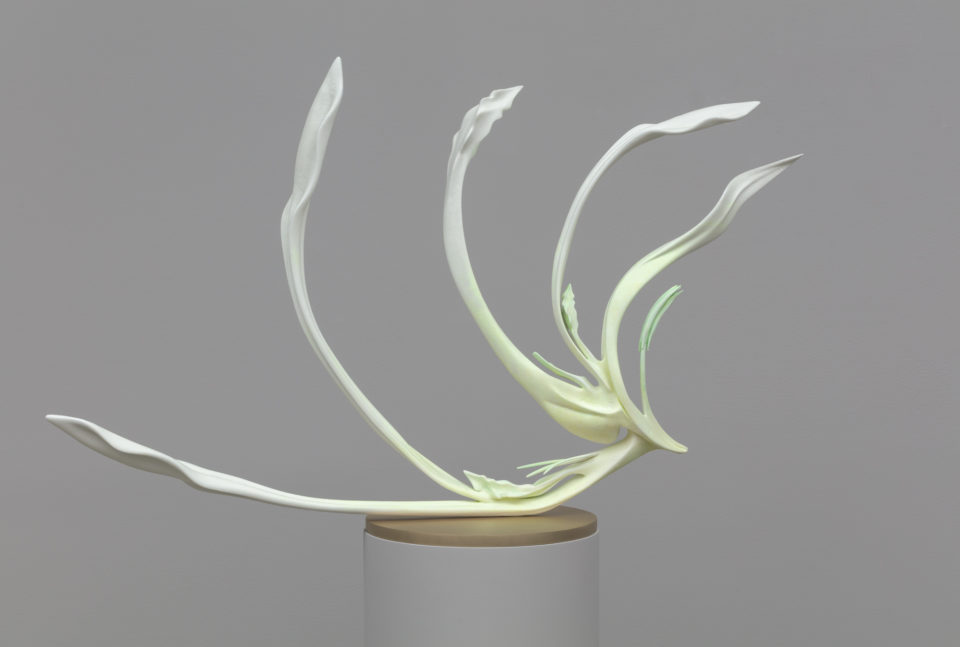 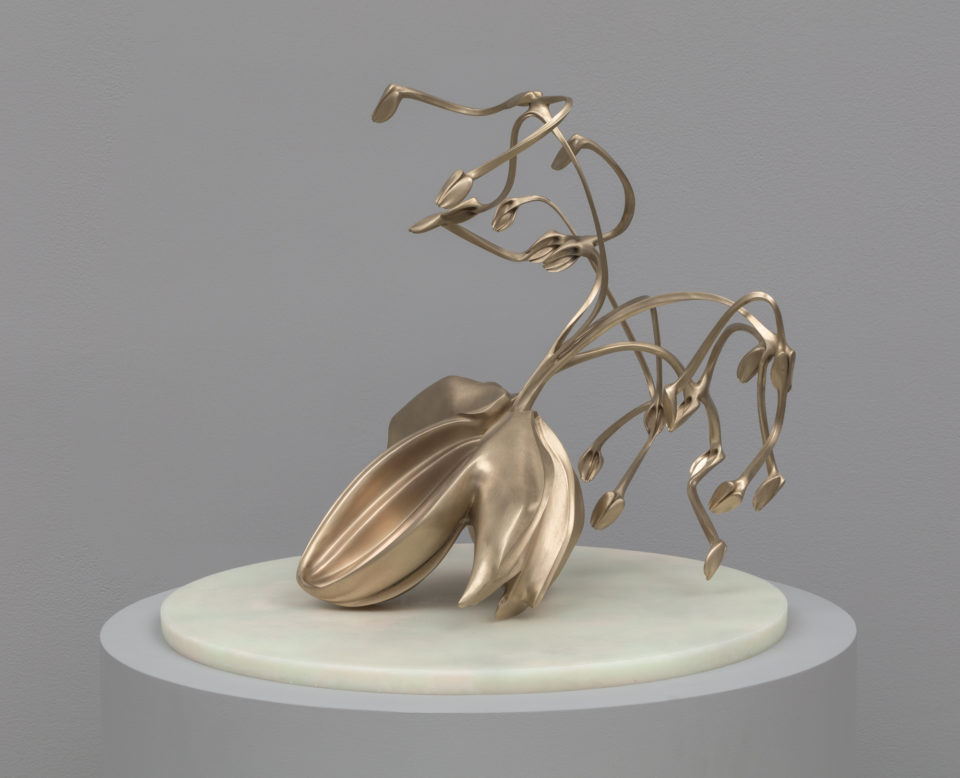 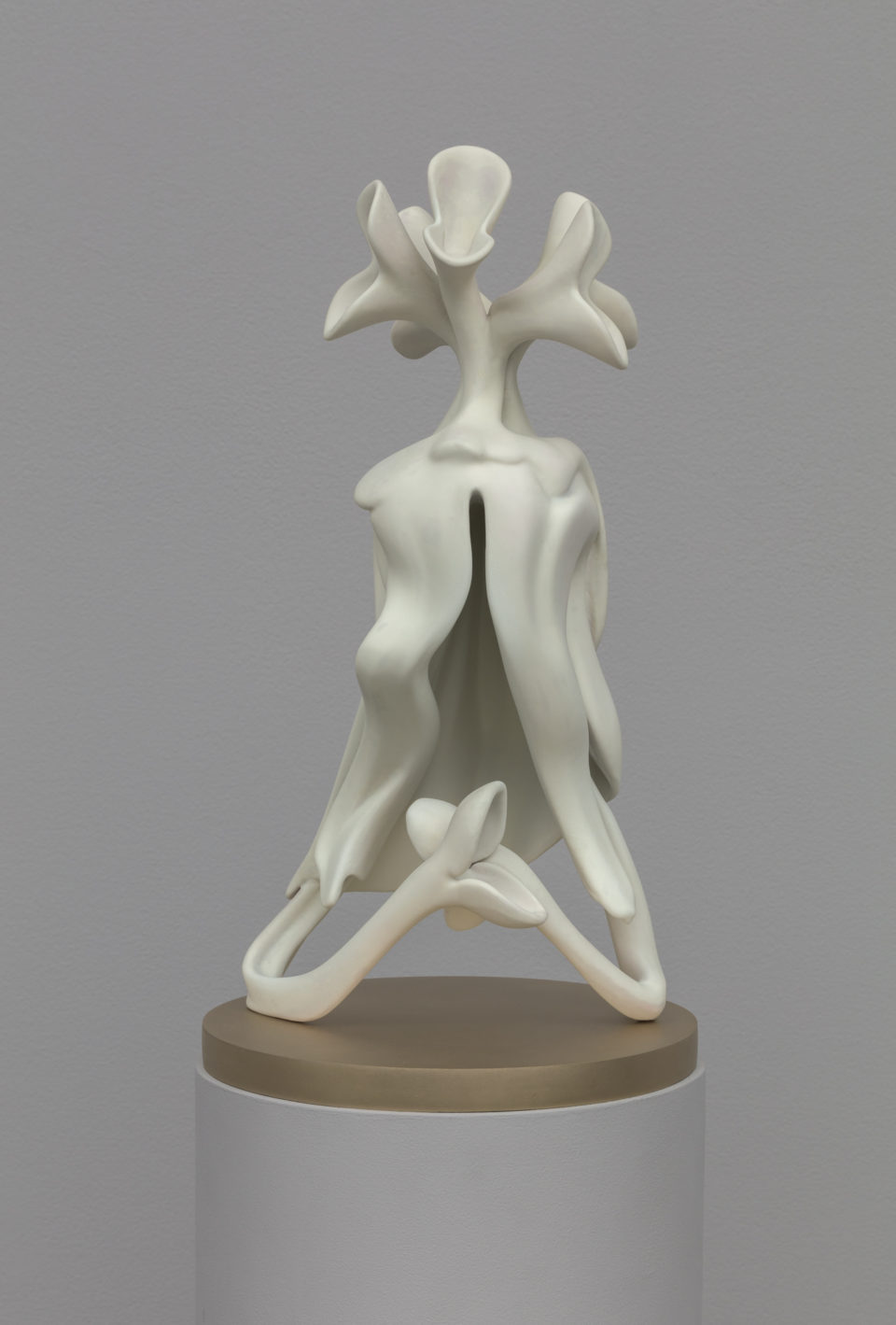 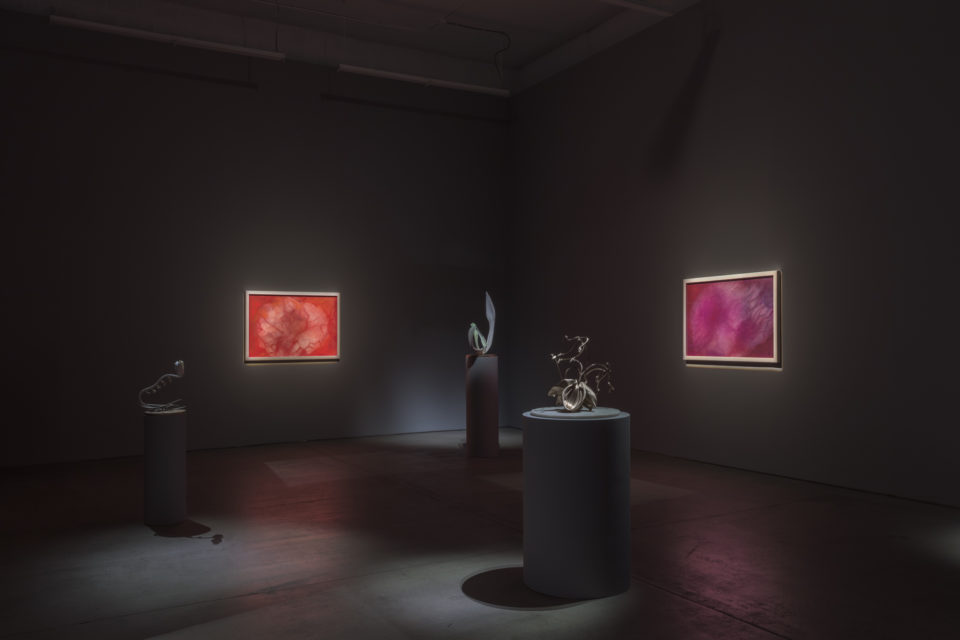 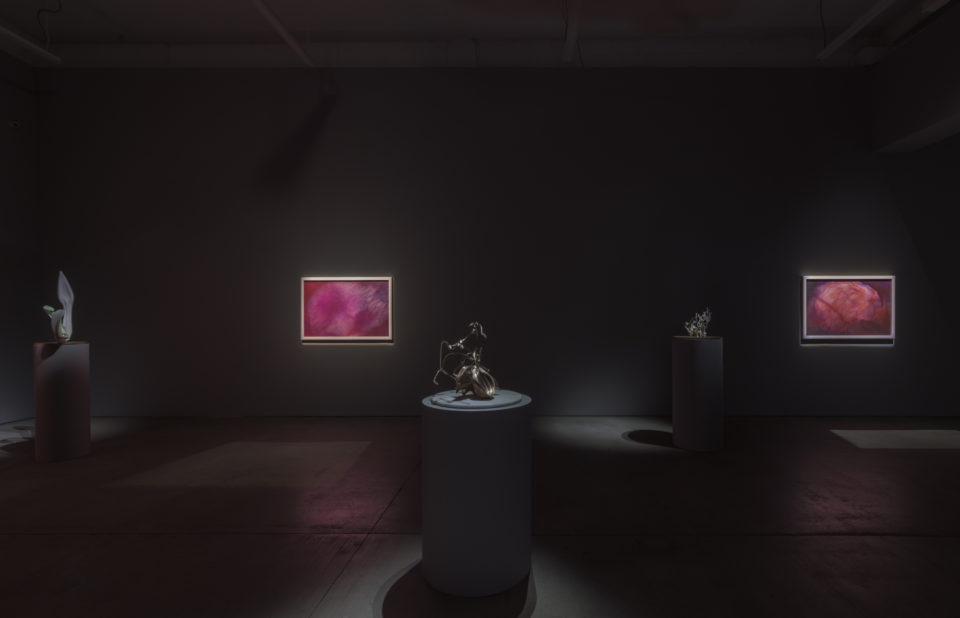 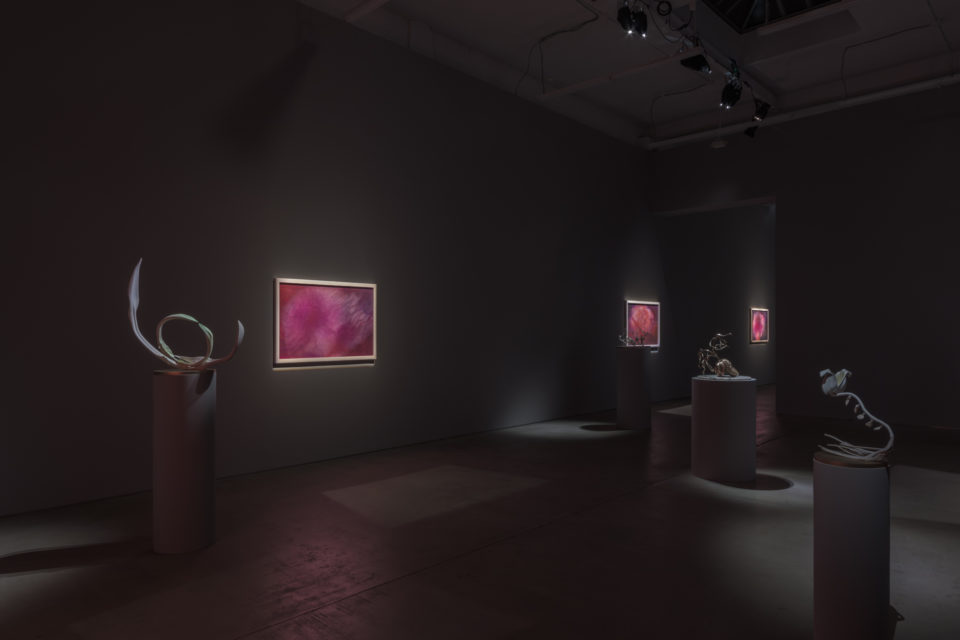 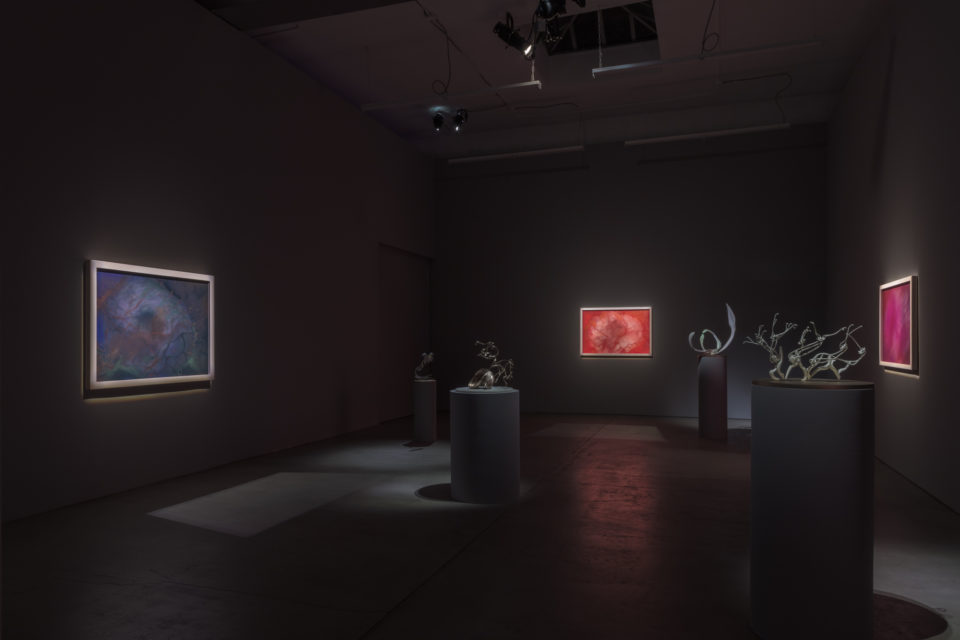 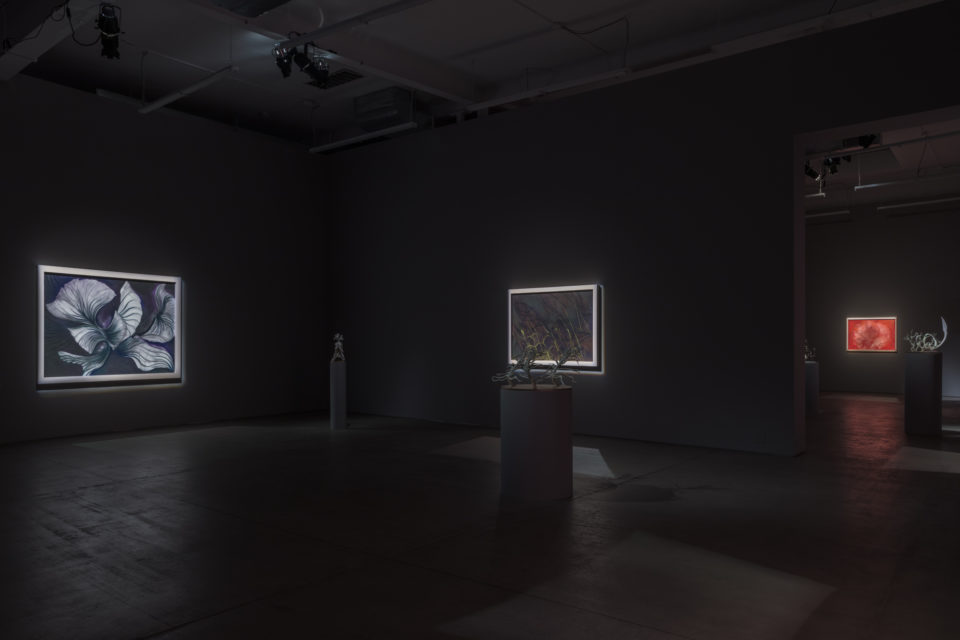 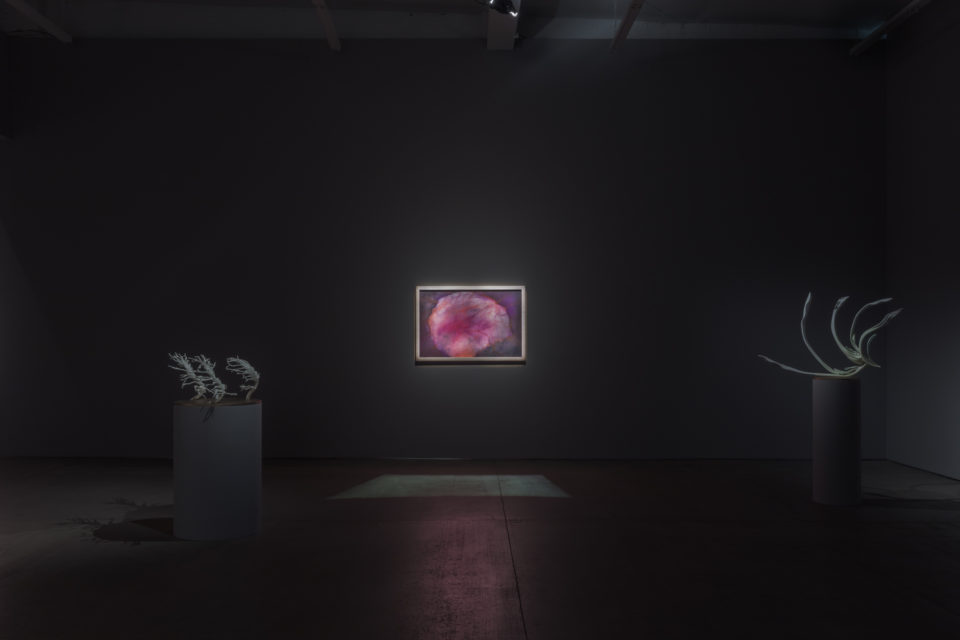 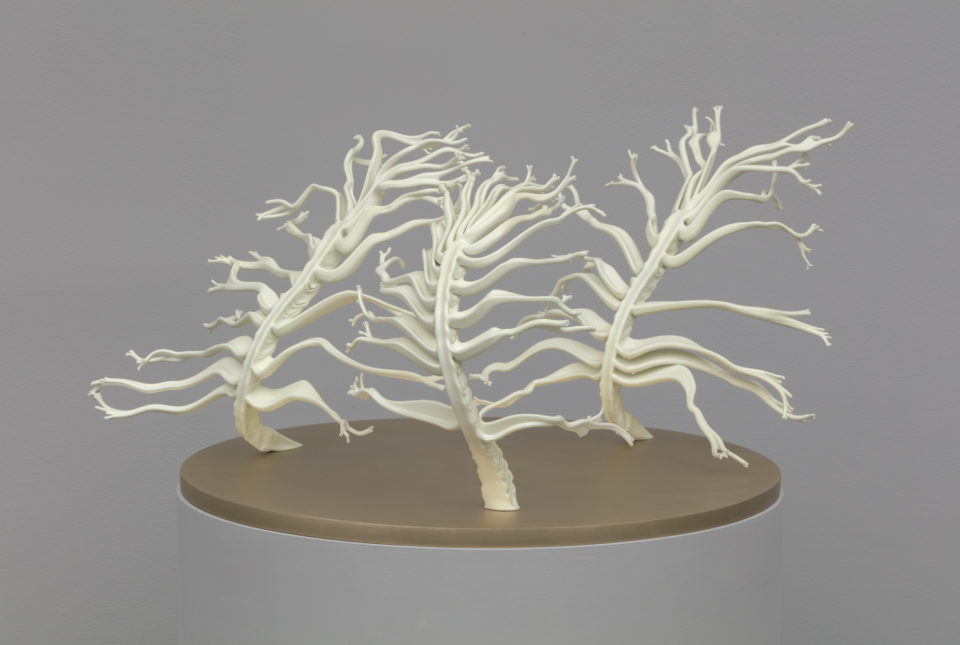 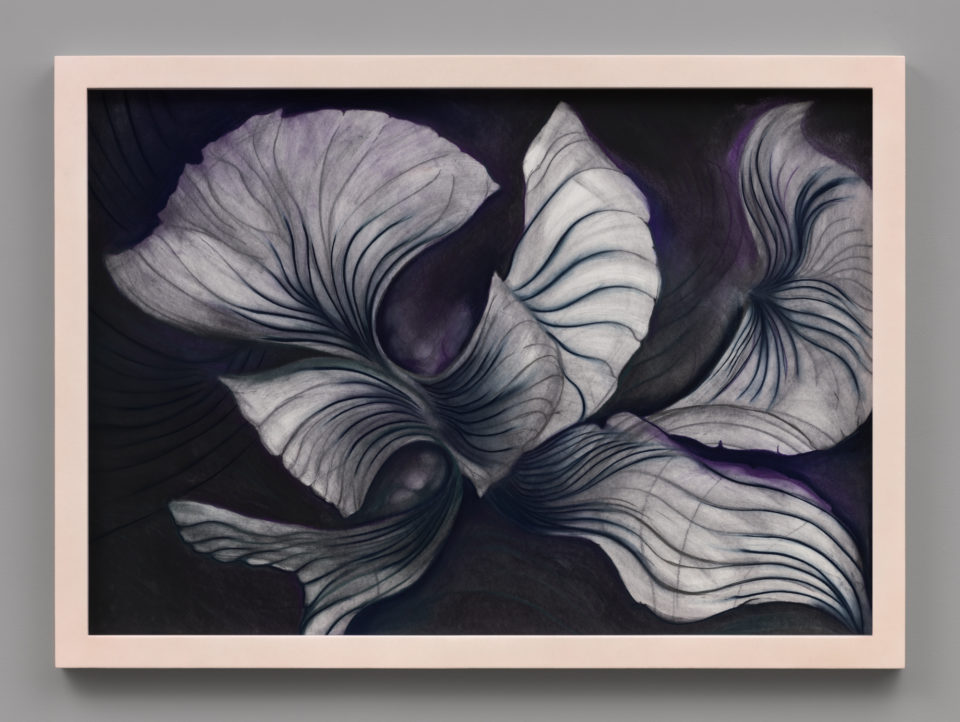 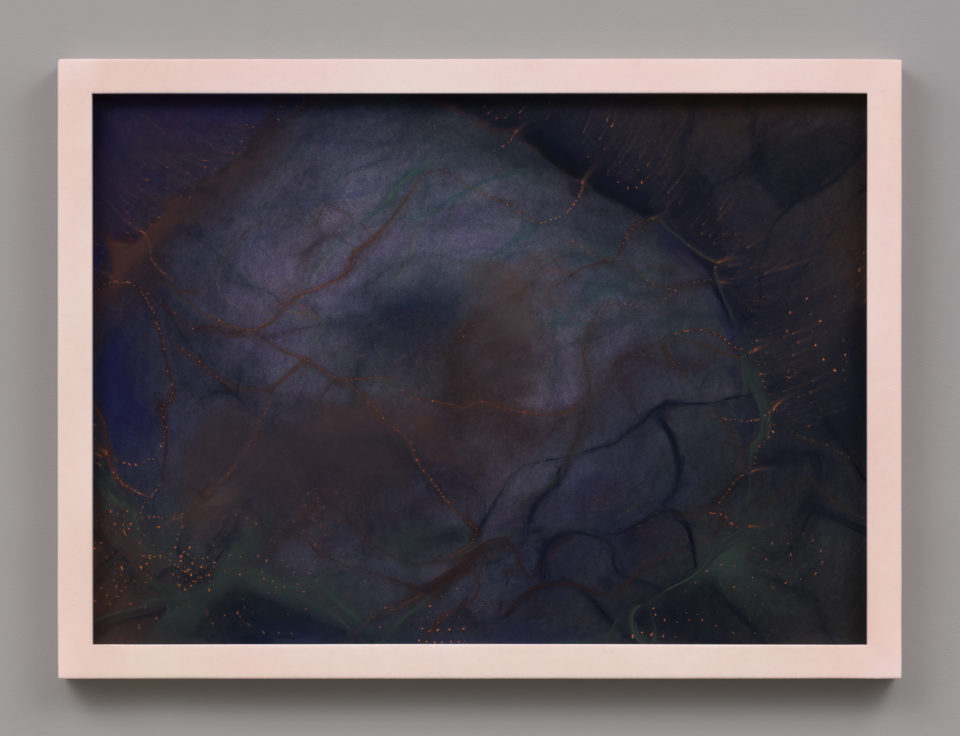 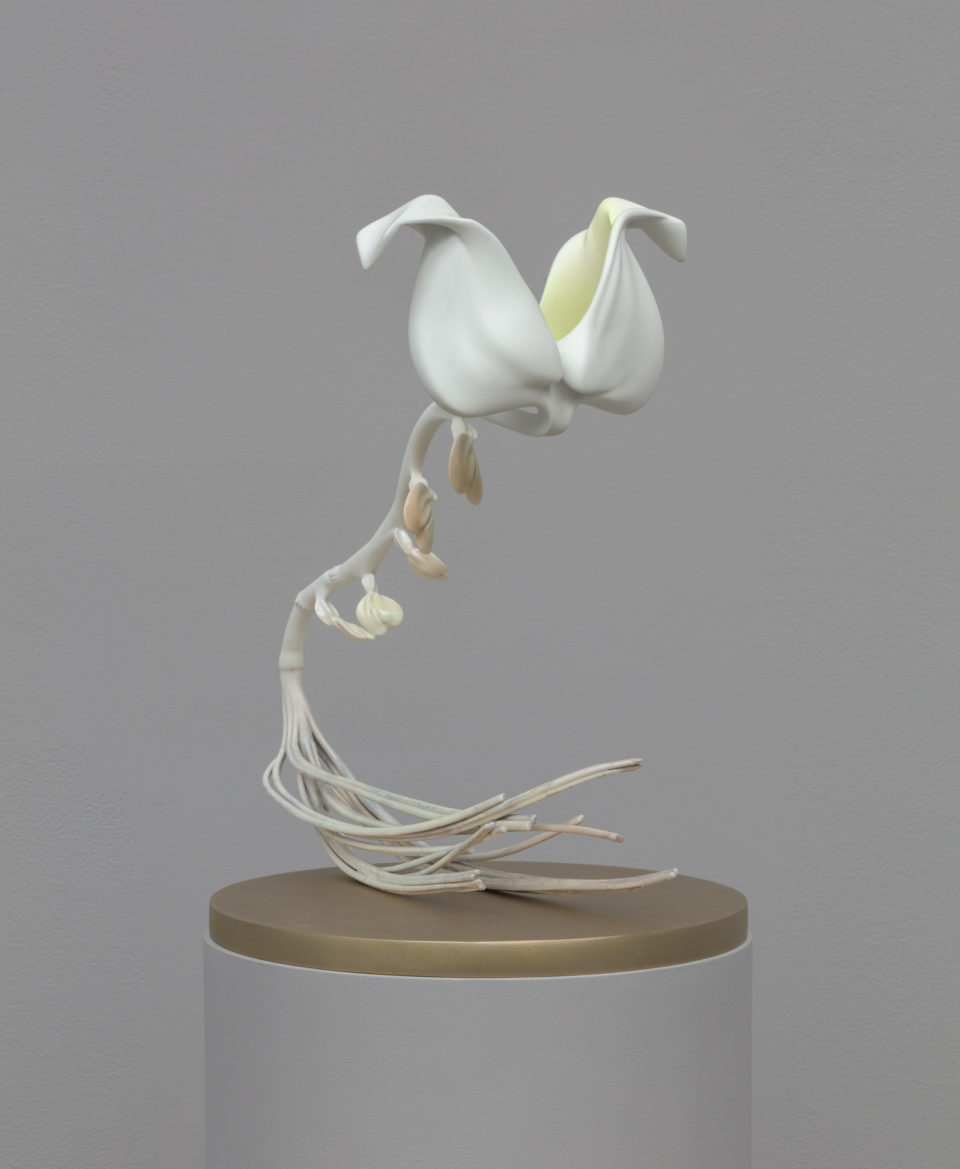 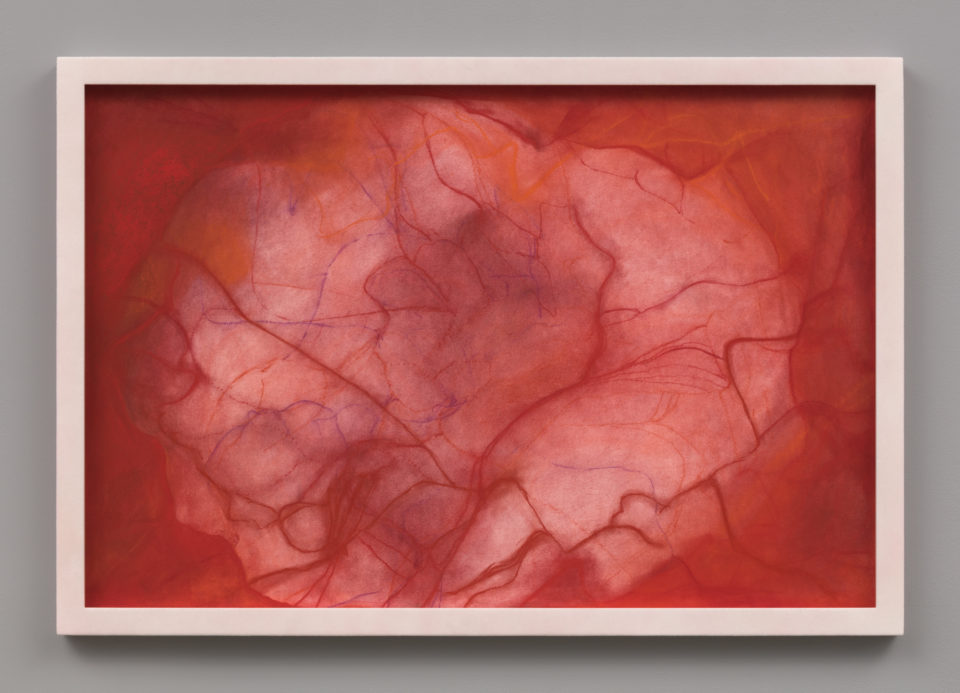 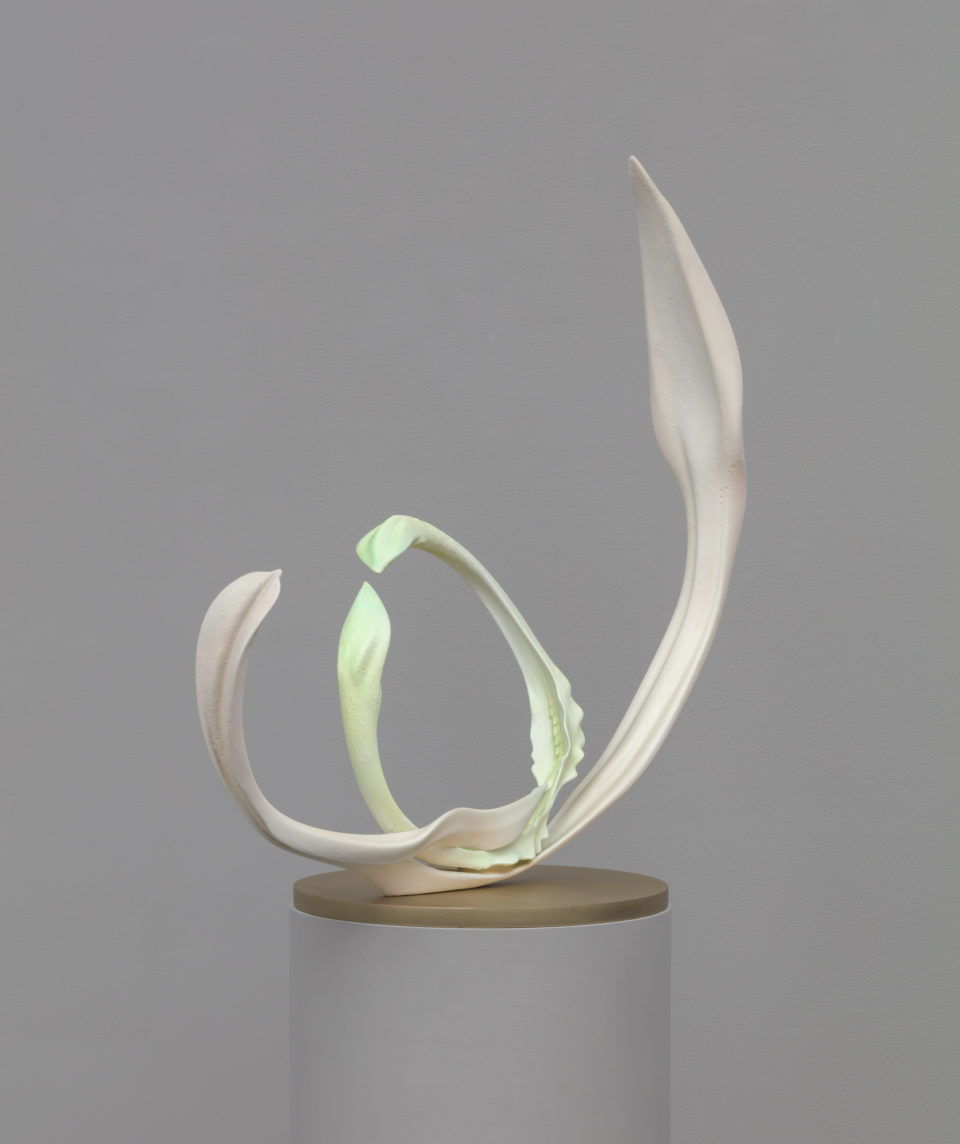 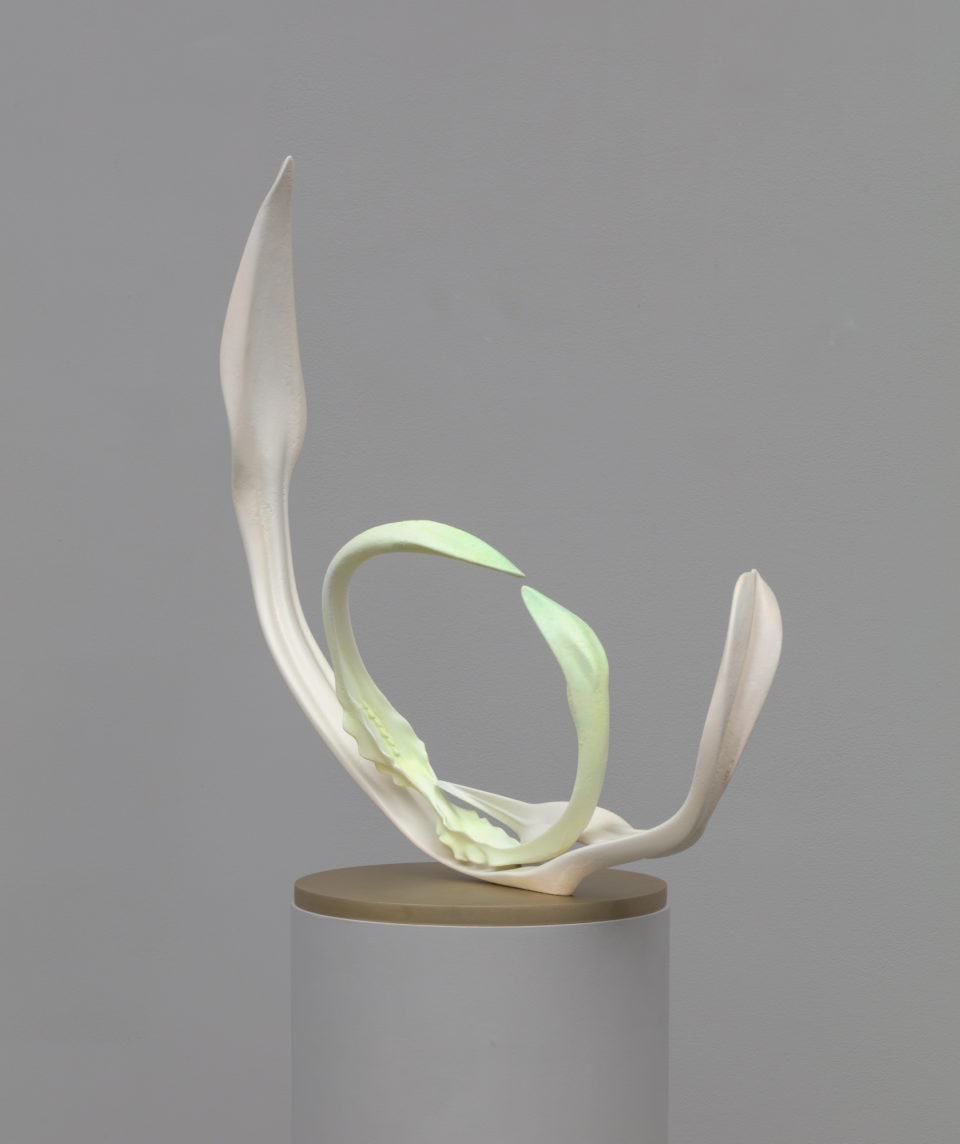 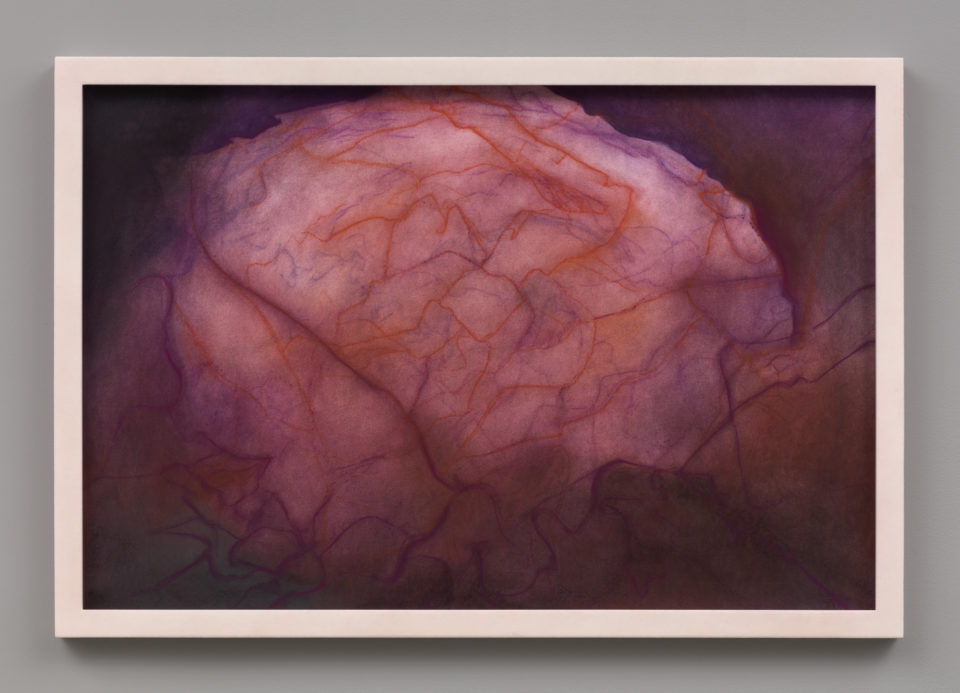 A poetic speculation that unfolds through a series of relationships, Energy Flows opens up a journey into the world of plants and beyond. As with her previous bodies of work, interdisciplinary collaboration has been a crucial aspect for Humeau, and research for the exhibition included meetings with botanists, soil specialists, horticulturists and other experts. This led Humeau to work directly with plants, soil creatures, living, dead and mineral matter, artificial intelligence, a clairvoyant, and ancient and contemporary systems of knowledge to develop investigations and prototypes into new modes of belonging.
Upon entering the exhibition space, one simultaneously descends into the enveloping darkness of fertile soil and ascends into a cosmic void. Eight botanical-looking specimens emerge from this darkness to commemorate emotions that we, humans, no longer perceive or know how to name. Inspired by John Koenig’s book, “Dictionary of Obscure Sorrows”, these conceptual maquettes for unnamed states of existence appear in transformation: some are iridescent, others seem to be perspiring or color-shifting as if the temperature is changing around them. To create this body of work, Humeau has been employing both natural and artificial elements: plant-based resins, thermochromic pigments, soil particles, sugars, pigments, grains, paraffin wax, beeswax, and bronze, but also synthetic resins, marble dust, rock particles, glass particles, sand, earth, and ceramics. Rendered in pastel and charcoal, and framed in skin-toned, plant-based resin casts that incorporate marble dust and sugars, the seven drawings derive from a detailed soil study, created with the help of an AI specialized in intelligent dynamic network models. Humeau refined and interpreted the numerical data received, in images for the human eye that depict hidden underground organisms and their states of transformation, as well as exchanges of information between life forms. For the artist, technology has long been used as an enabler for humans to understand and connect to other-than-human worlds. Energy Flows is inspired by the Doctrine of Signatures (DOS), a theory based on an ancient concept which suggests that some of the physical characteristics of plants hold clues on how they can be used as medicine. The plant Pulmonaria (lungwort), for instance, with its leaves shaped like lungs, has long been used to treat lung ailments such as tuberculosis and asthma.
Observed across different cultures since ancient times, a widely-circulated belief was that the knowledge that humans and animals have gained on using medicinal plants, came from a divine realm. Impossible to prove this through science, DOS is a theory that, with the rise of the Enlightenment and colonization, has been expelled towards the margins of our collective consciousness. Yet, in cultures that still celebrate their relationship with nature, the belief that plants and humans have a connection to the divine order still prevails.
In her realization that we lack a universal language to express the collective grief over the death of many, and the trauma of the seemingly uncontrollable trajectory of climate destruction, Humeau found a sense of alleviation and hope to be shared in our ancient connection to nature. Choosing organisms that can act as our guides in this ominous journey, and connecting them further to human emotions that don’t have a linguistic denominator, the artist depicts how novel ways of connection between entities are still possible and of the utmost importance.

All images: courtesy of the artist and C L E A R I N G, New York.