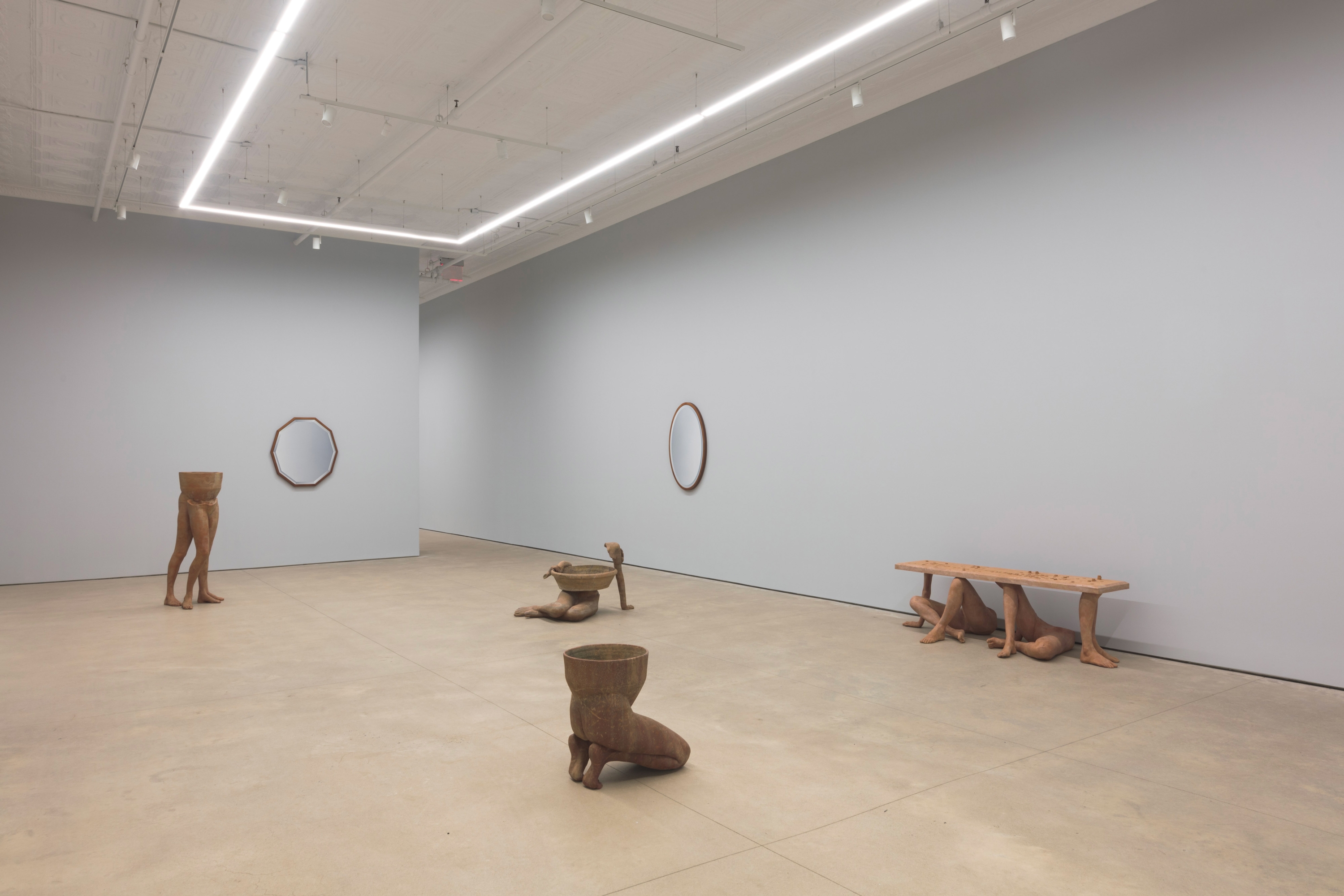 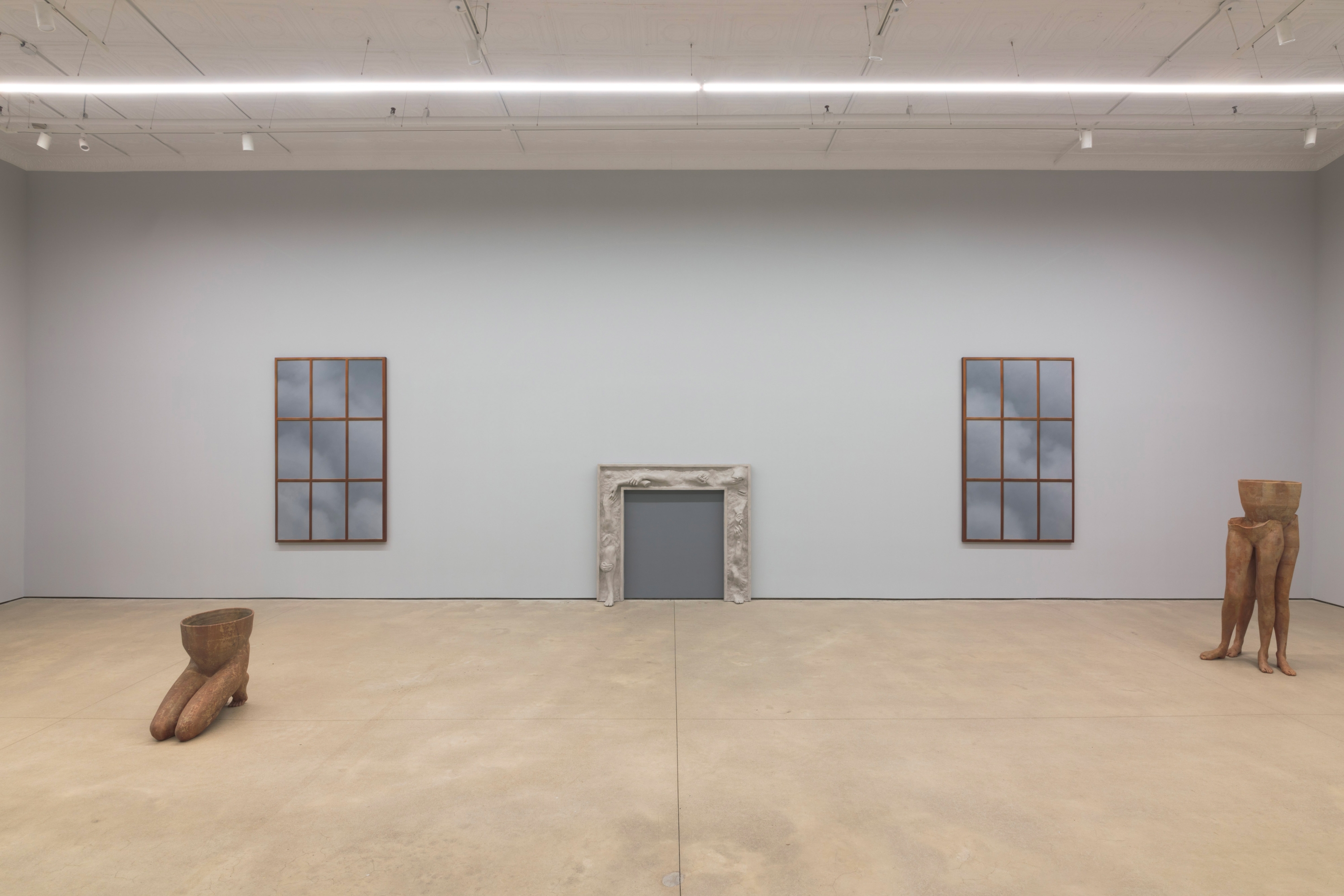 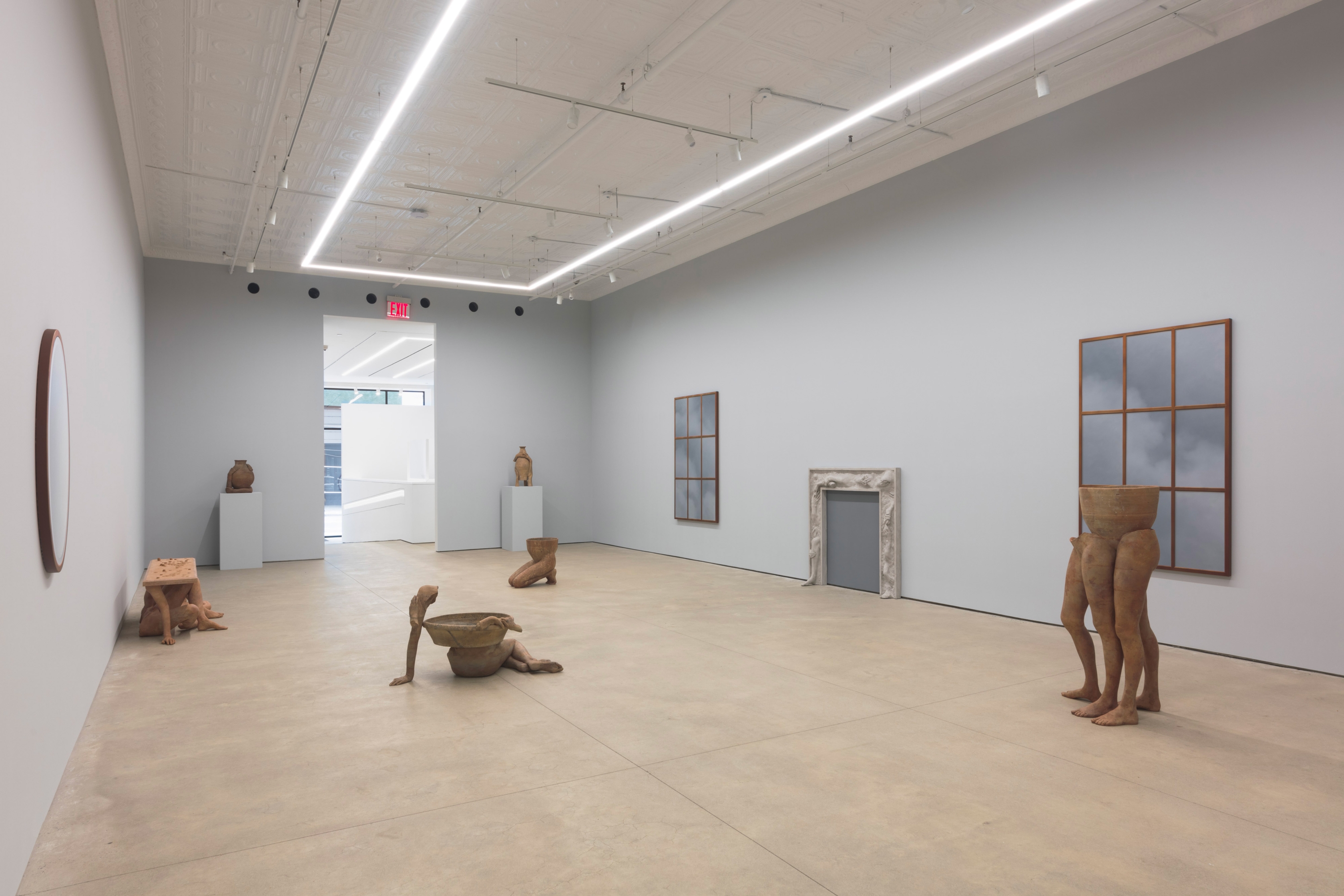 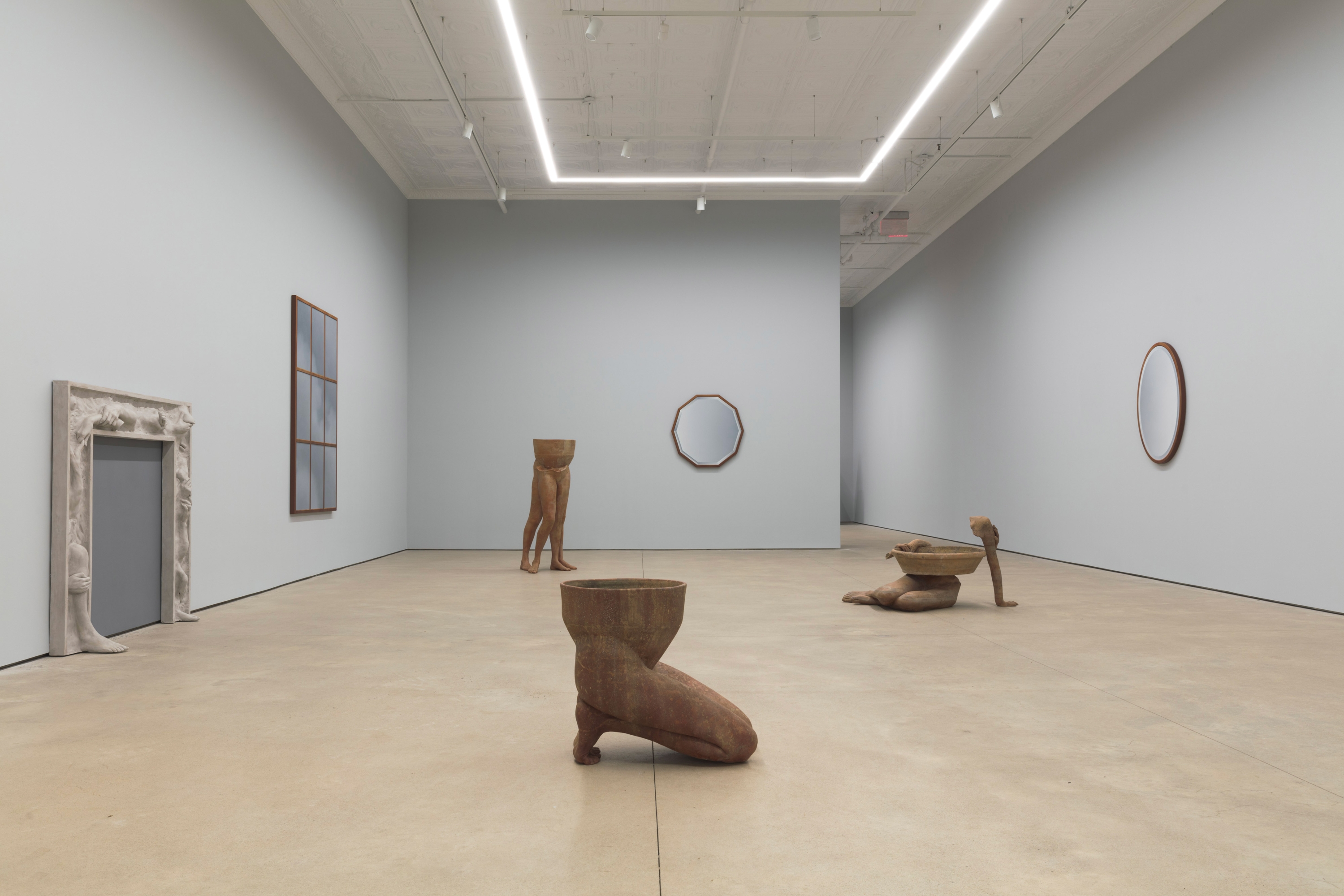 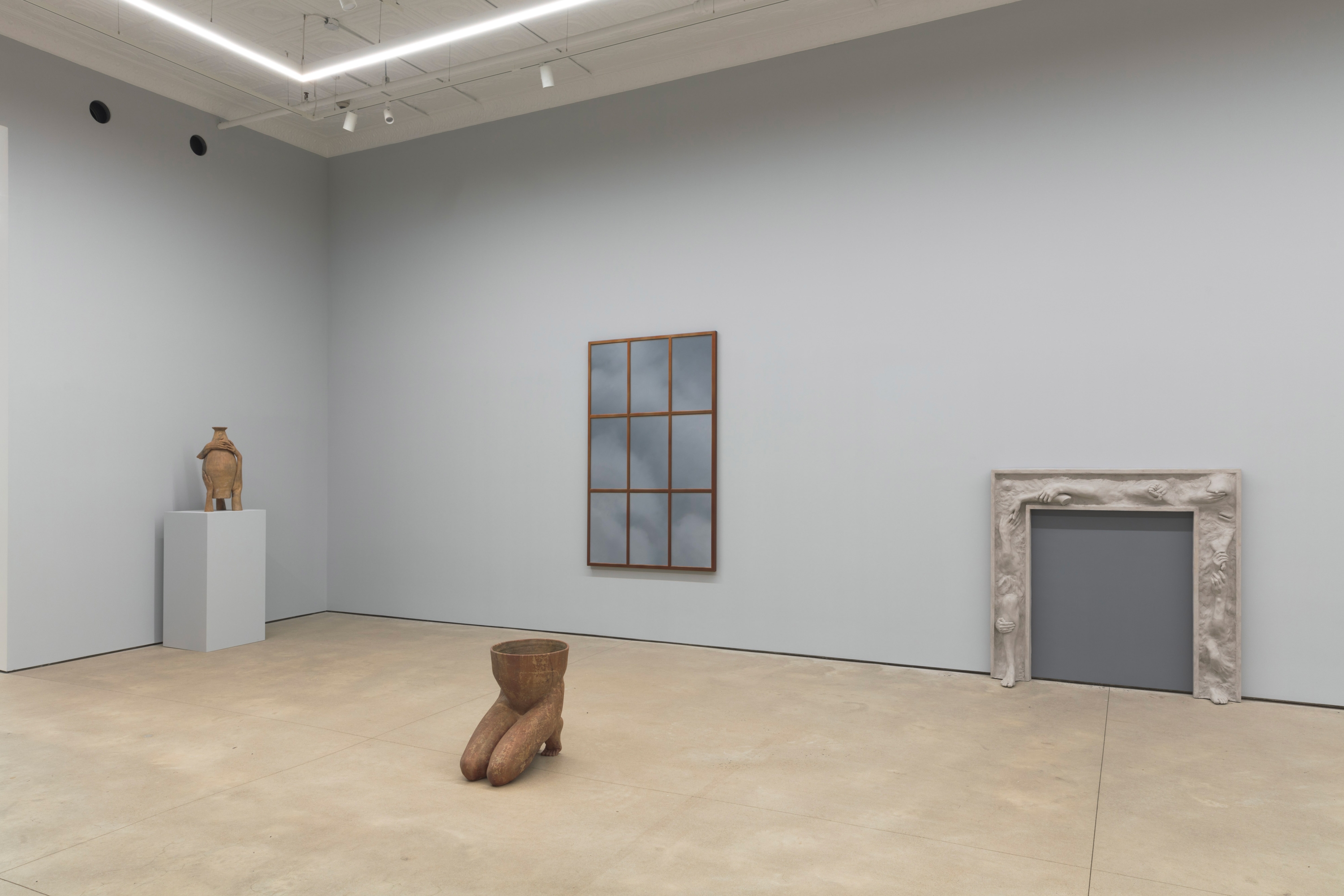 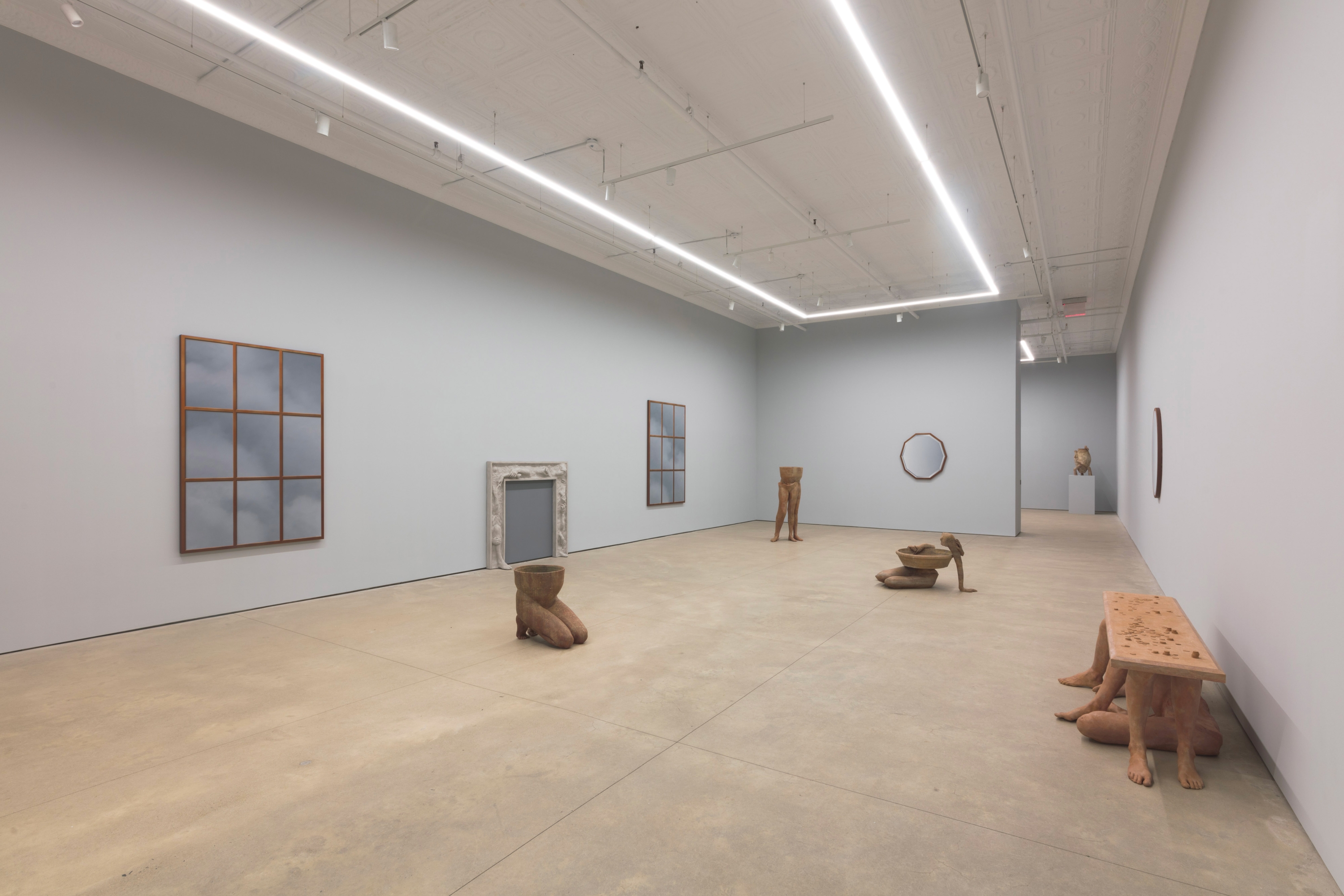 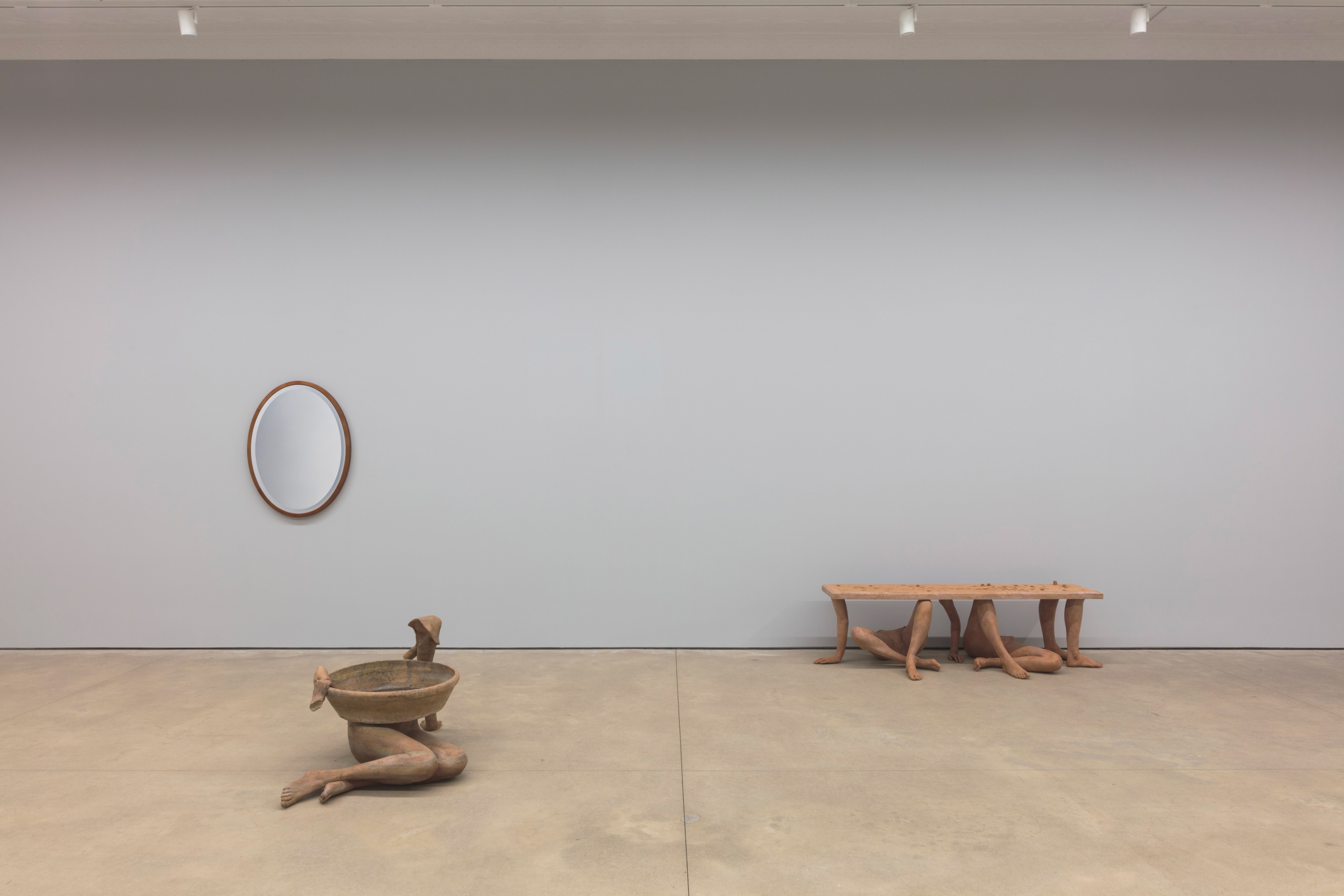 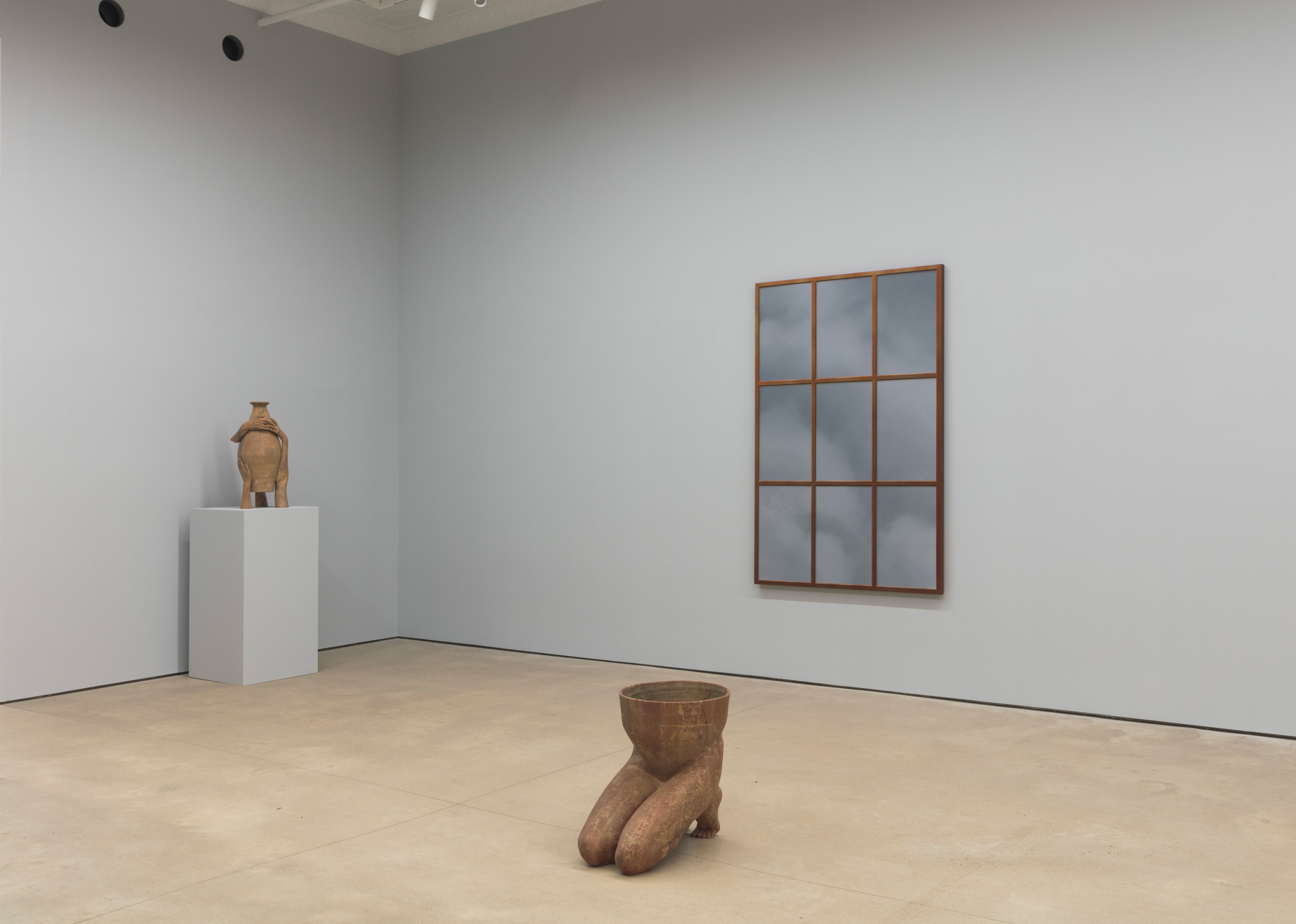 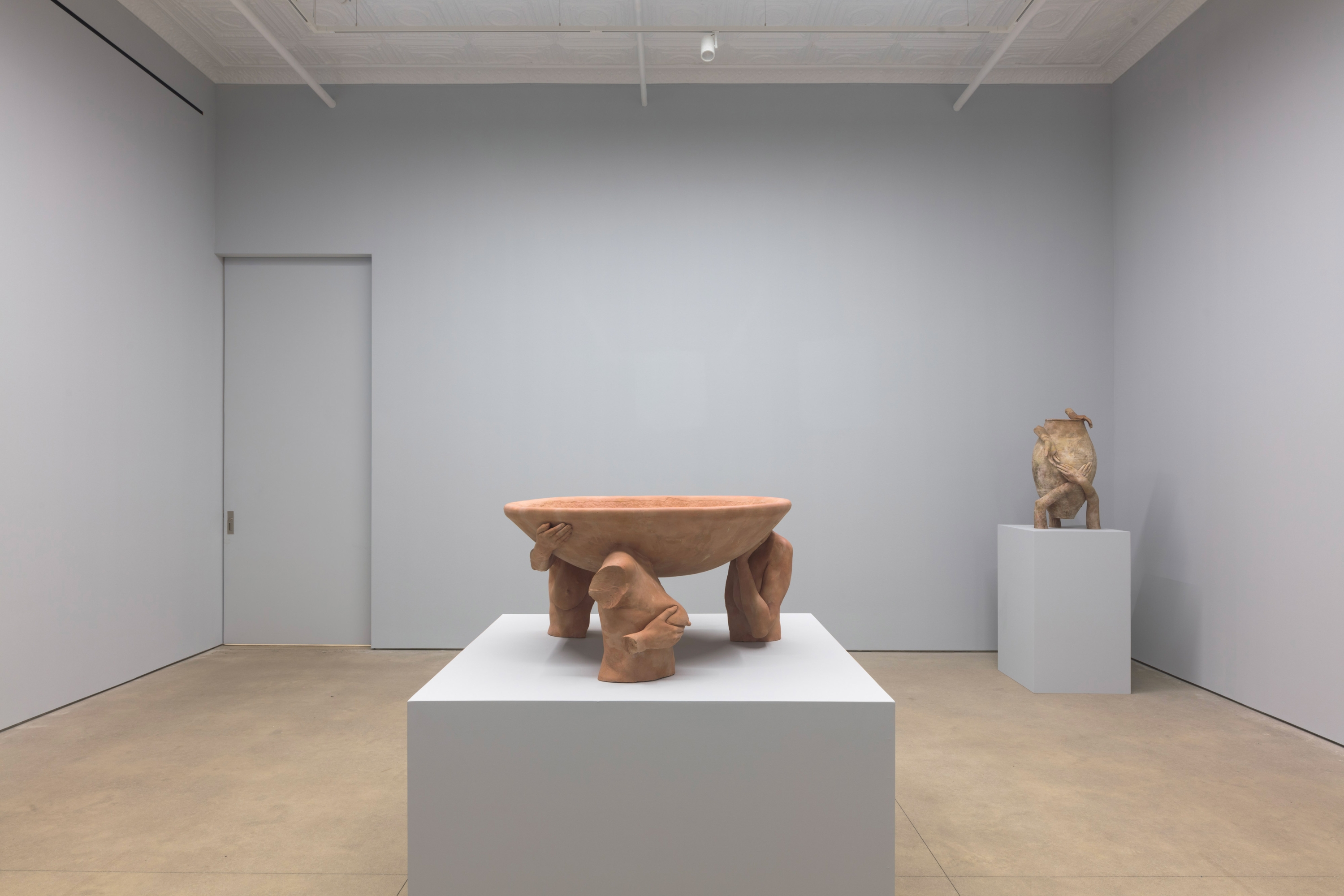 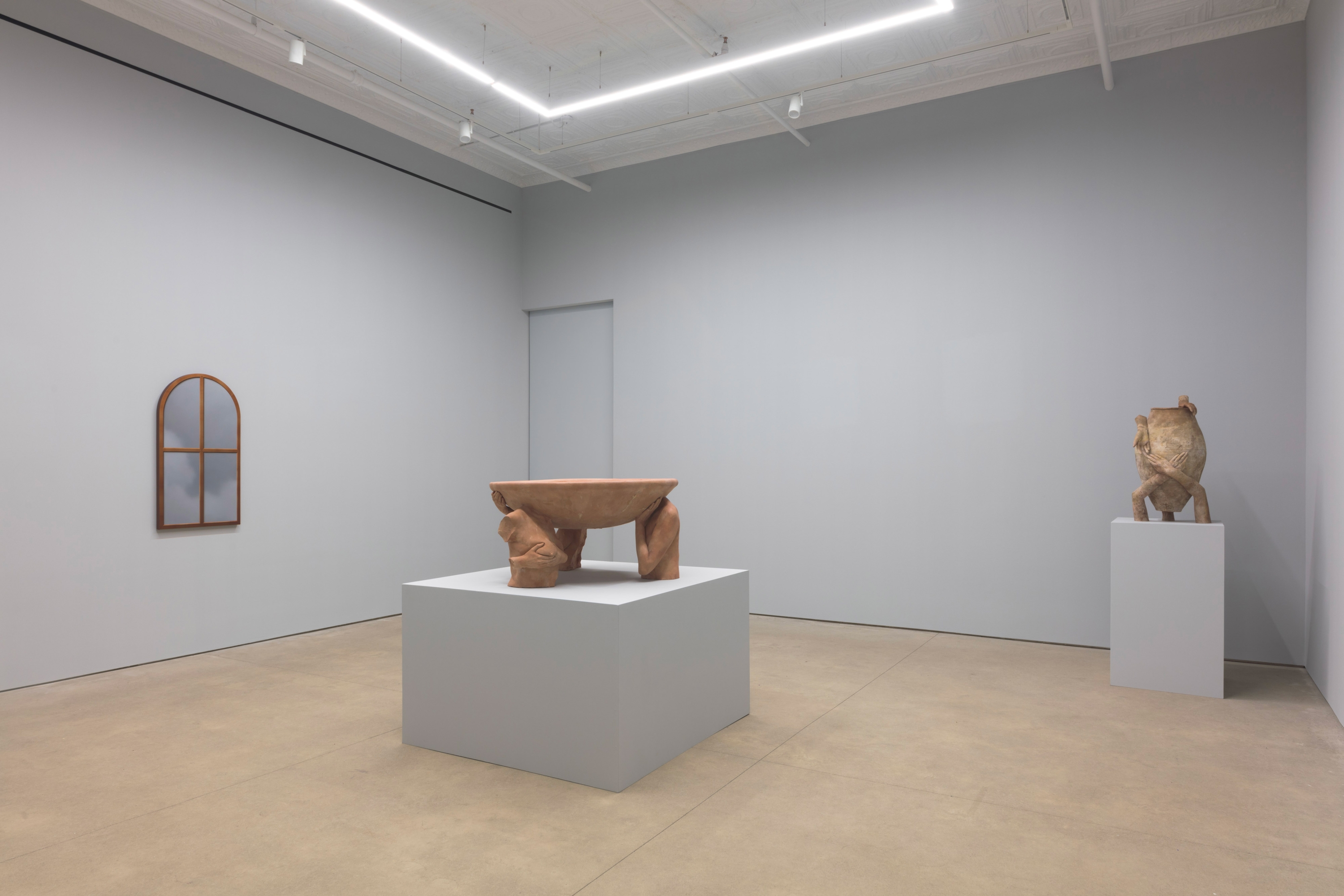 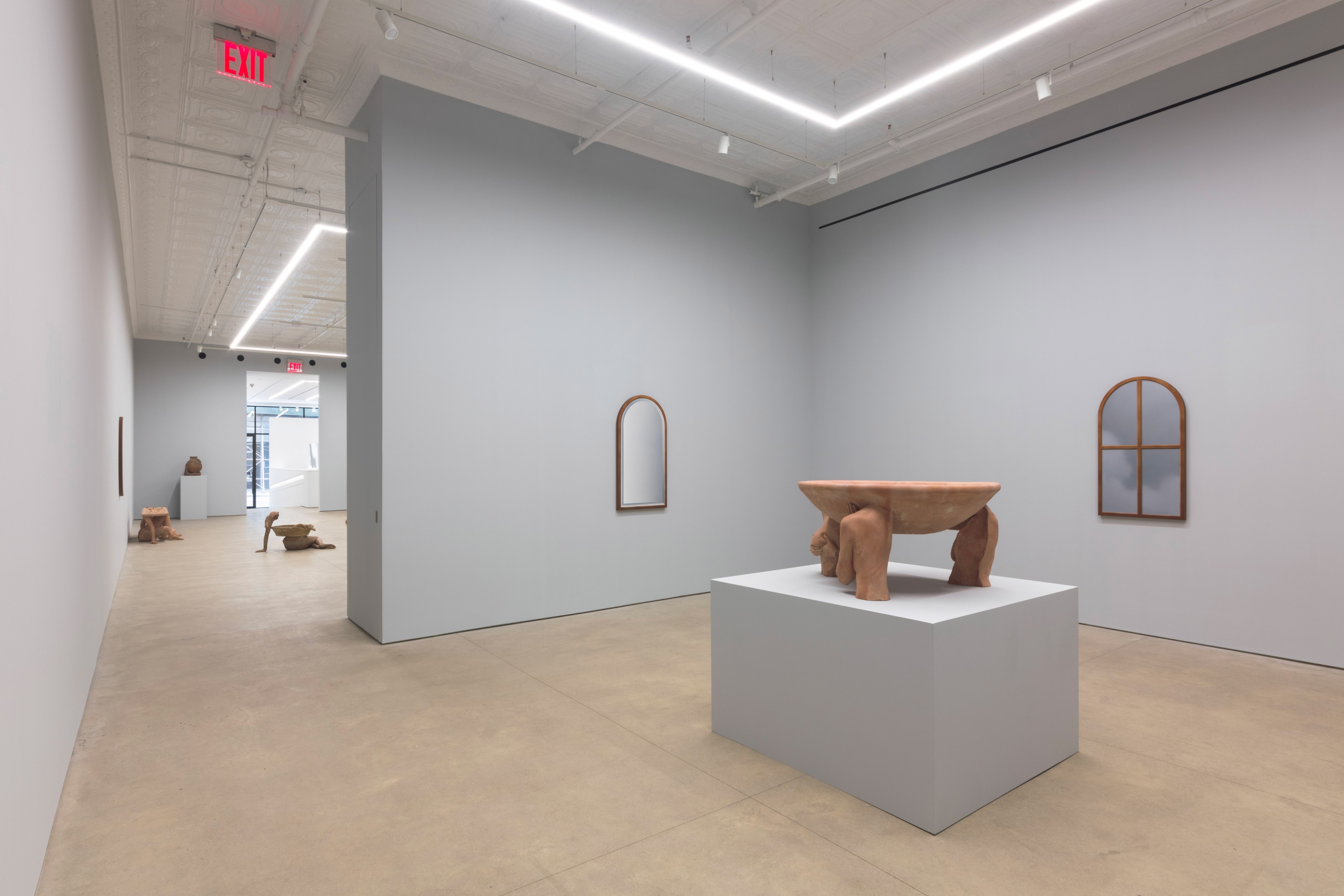 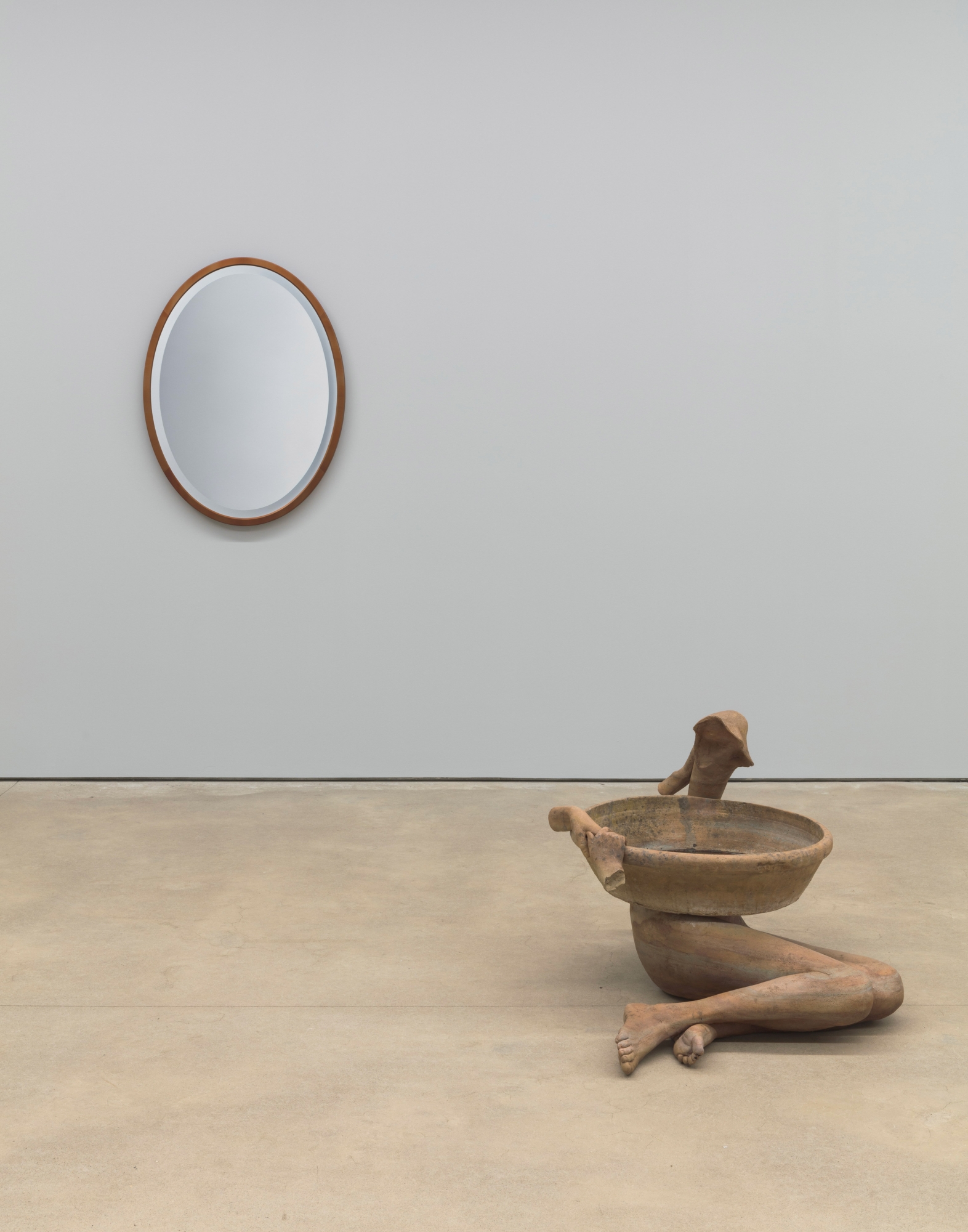 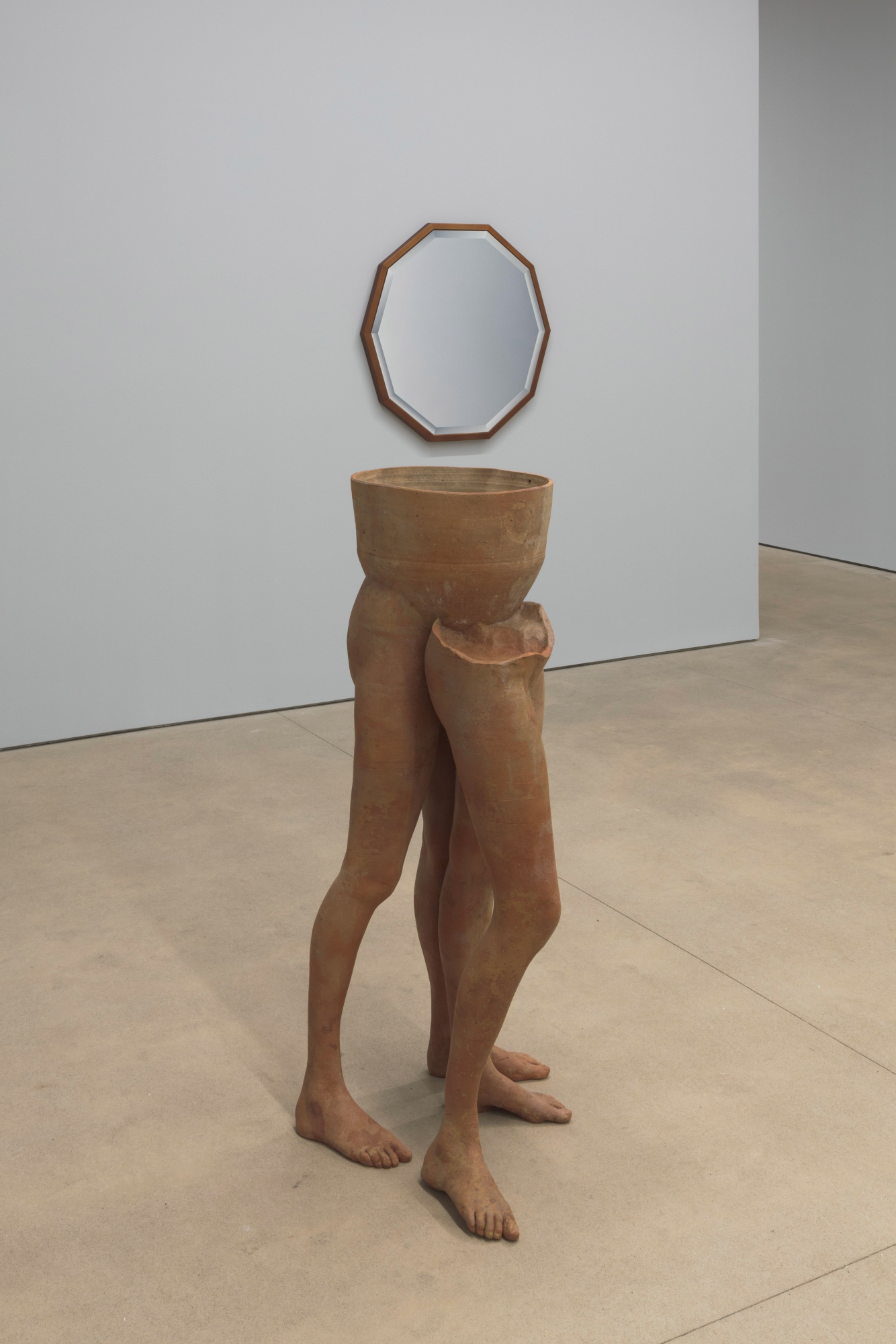 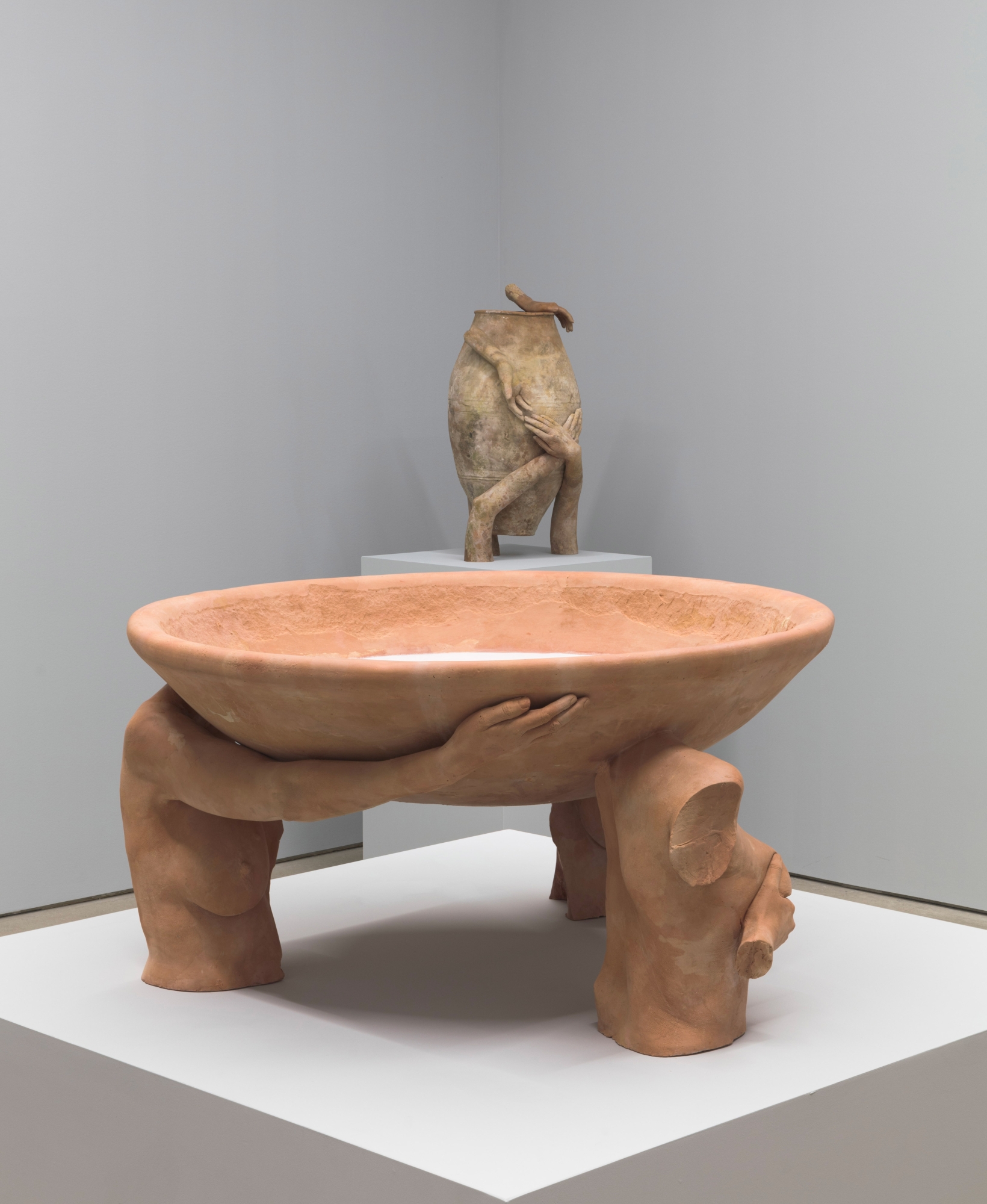 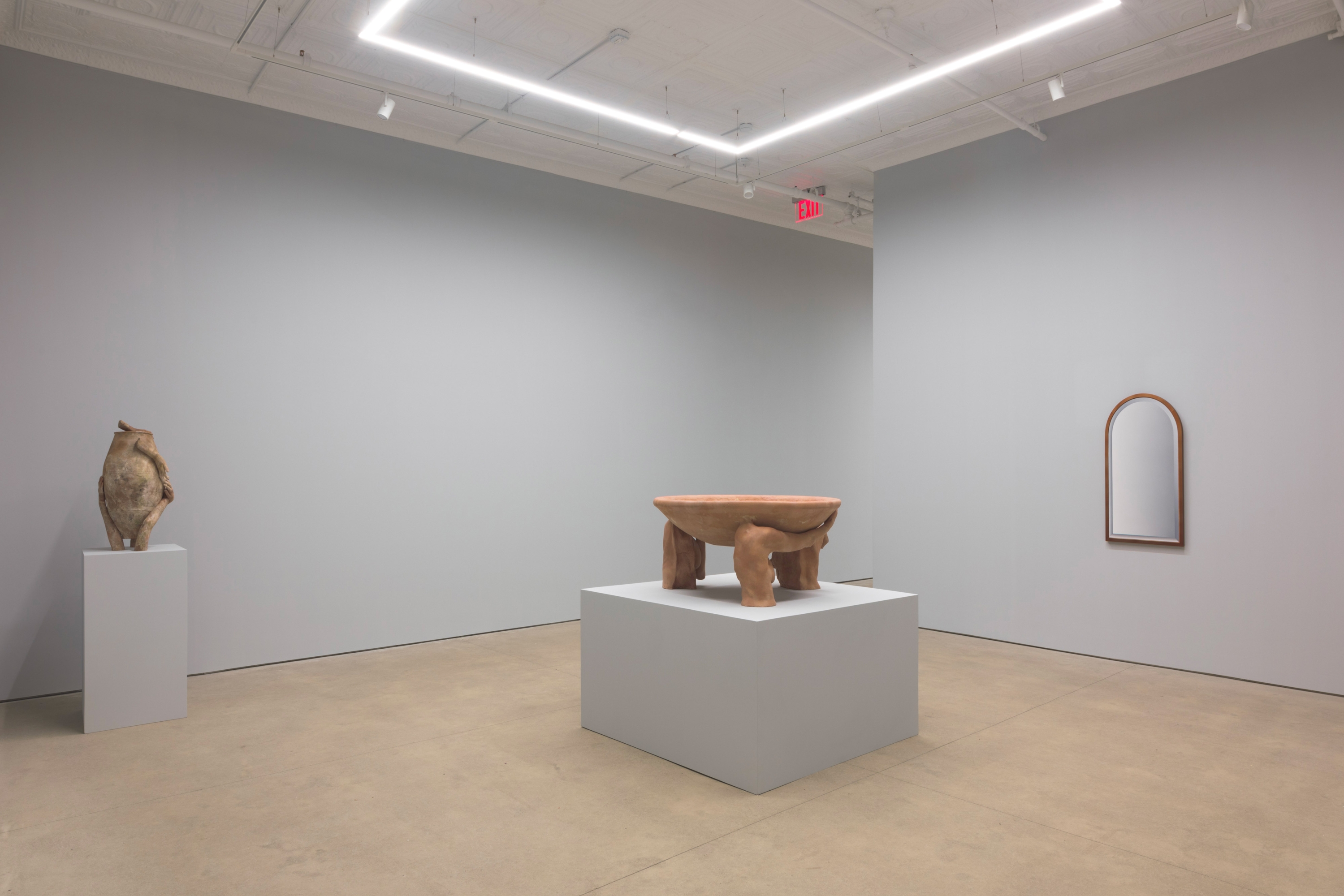 P·P·O·W is pleased to present Knots, a two-person exhibition of works by Clementine Keith-Roach and Christopher Page. For their first dedicated exhibition together, Keith-Roach and Page explore the knottedness of being. As two artists with distinct practices who share a studio, home, bed, and two young children, Keith-Roach and Page examine the emotional and bodily terrain of their bound lives. Keith-Roach’s figure-like sculptures and Page’s screen-like paintings blur the boundaries between interior and exterior, object and figure, self-portraiture, and self-alienation. Simultaneously unraveling and intertwining, Knots forms a psychologically evocative space for the exploration of fragmentation and recombination.

Subtly altering the gallery into an uncanny interior, Keith-Roach and Page have created a surreal and cerebral mise-en-scène, centering around a collaborative hearth of knotted body-parts, in which our illusions of wholeness break down. Keith-Roach populates this strange interior with chimeras of fragmentary figures fused with terracotta urns, whose poses evoke both domesticity and the formality of ancient statuary. Applying casts of her own body to vessels once used to store wine, milk and water, Keith-Roach transforms everyday utensils into purely symbolic objects that invoke the sacred. The casts are painted to merge with the patina of the old and used objects they orbit or bear. In works such as Nuptials and New Mourning, the illusion is total; the entire sculpture is cast in pigmented plaster to mimic terracotta. These mimicries are not a form of self-portraiture but self-alienation that encourage reflection on the maternal body as a space of both love and estrangement.

If Keith-Roach’s sculptures are the inhabitants of Knots, Page’s meticulously rendered oil paintings are the stand-ins for the architectural apertures of this quasi-interior. His sfumato ‘windows’ paradoxically suggest and obscure an exterior beyond the walls, while his blank ‘mirrors’ both offer and deny us our own reflection. Rich with art historical references and psychological depth, Page’s trompe l’oeil paintings speak to our collective dissociation from physical reality. Light appears to fall on their chamfered frames, but this is all a part of the illusion into which the eye falls, struggling to determine virtual from actual depth. Although his mirrors aren’t actually reflective, Page’s scrupulous attention to detail and sleight of hand impels us to reflect on the image of ourselves that we might expect to see there. Mirroring Keith-Roach’s sculptures, the figure is both implied and negated.

In Knots, Keith-Roach and Page manifest a breakdown between interior and exterior that is at once corporeal, psychological, and architectural. The French psychoanalyst, Jacques Lacan’s famous paper, “The Mirror Stage as Formative of the I Function,” proposes that one’s psychological interiority paradoxically emerges from the outside, from the image of one’s body in the mirror. Like Narcissus, we are enthralled by our reflection – the image of wholeness allays the anxiety of being but a jumble of inchoate body-parts. That wholeness is, however, a fantasy. Our reflection produces an illusion of isolated selfhood that belies our estrangement from ourselves and our entanglement with others. Together, Page’s reflectionless ‘mirrors’ and Keith-Roach’s fragmented figures unravel this myth of individual coherence and explore the knots which bind us to each other.