Ashley Bickerton: Seascapes at the End of History 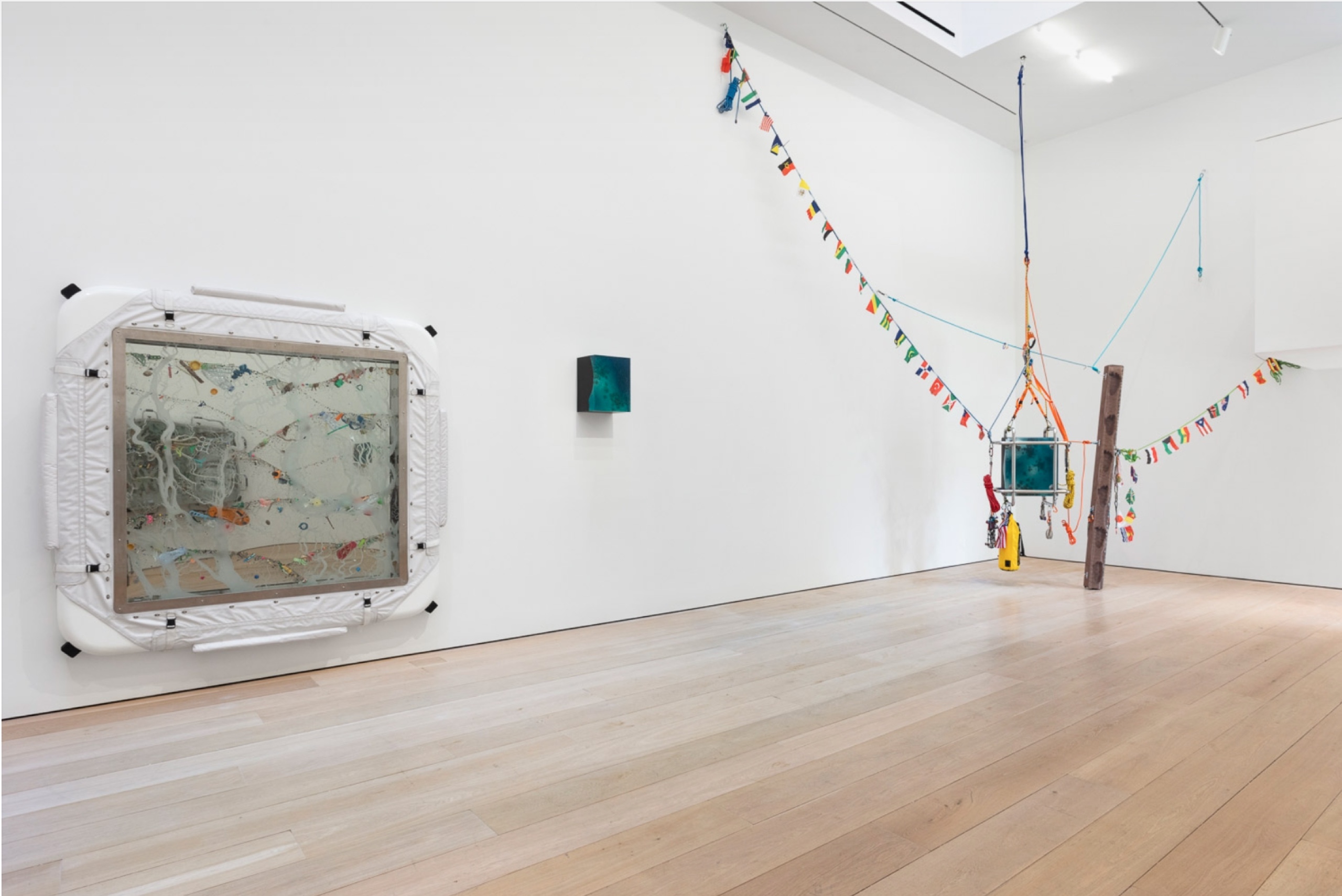 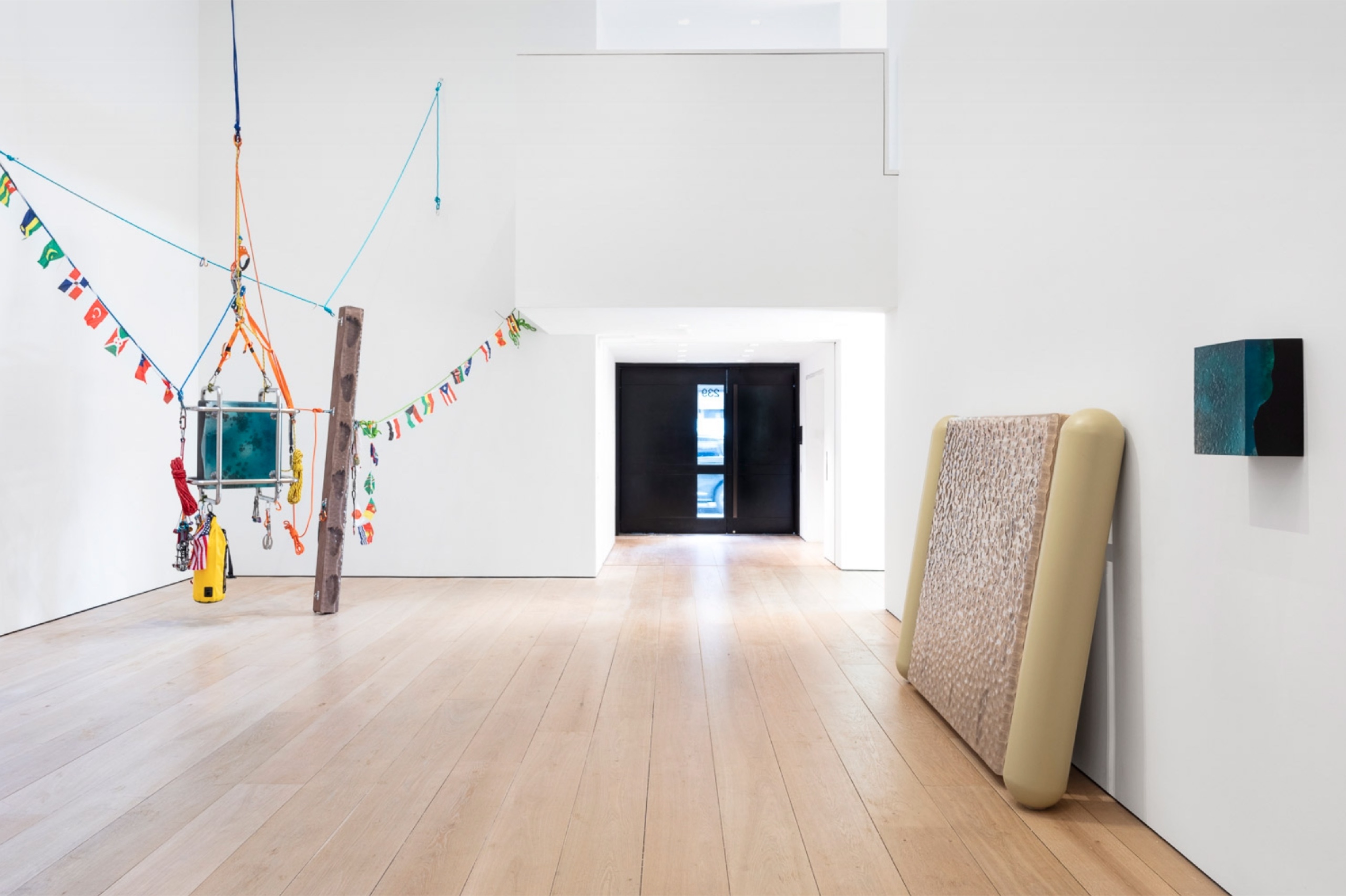 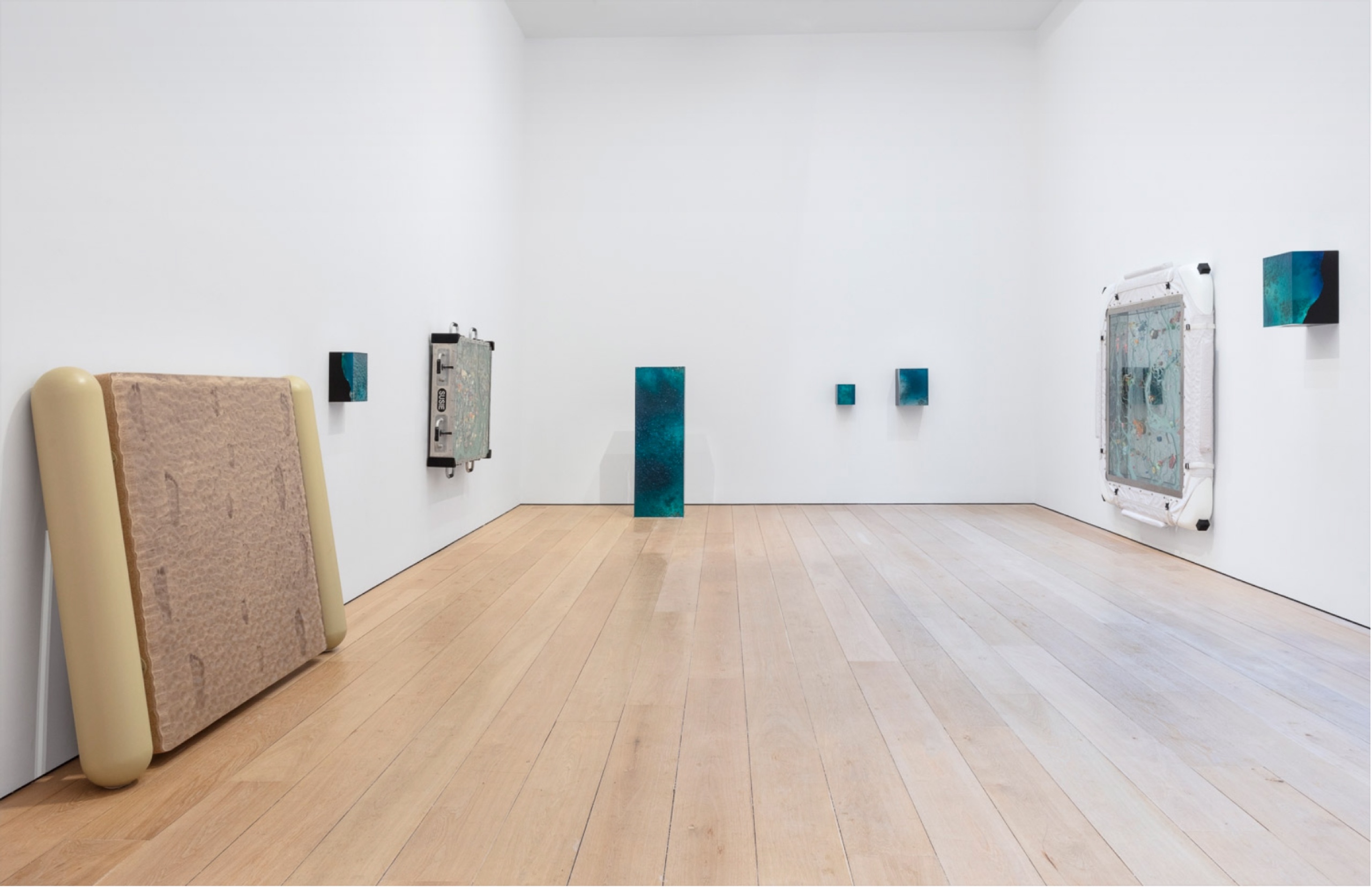 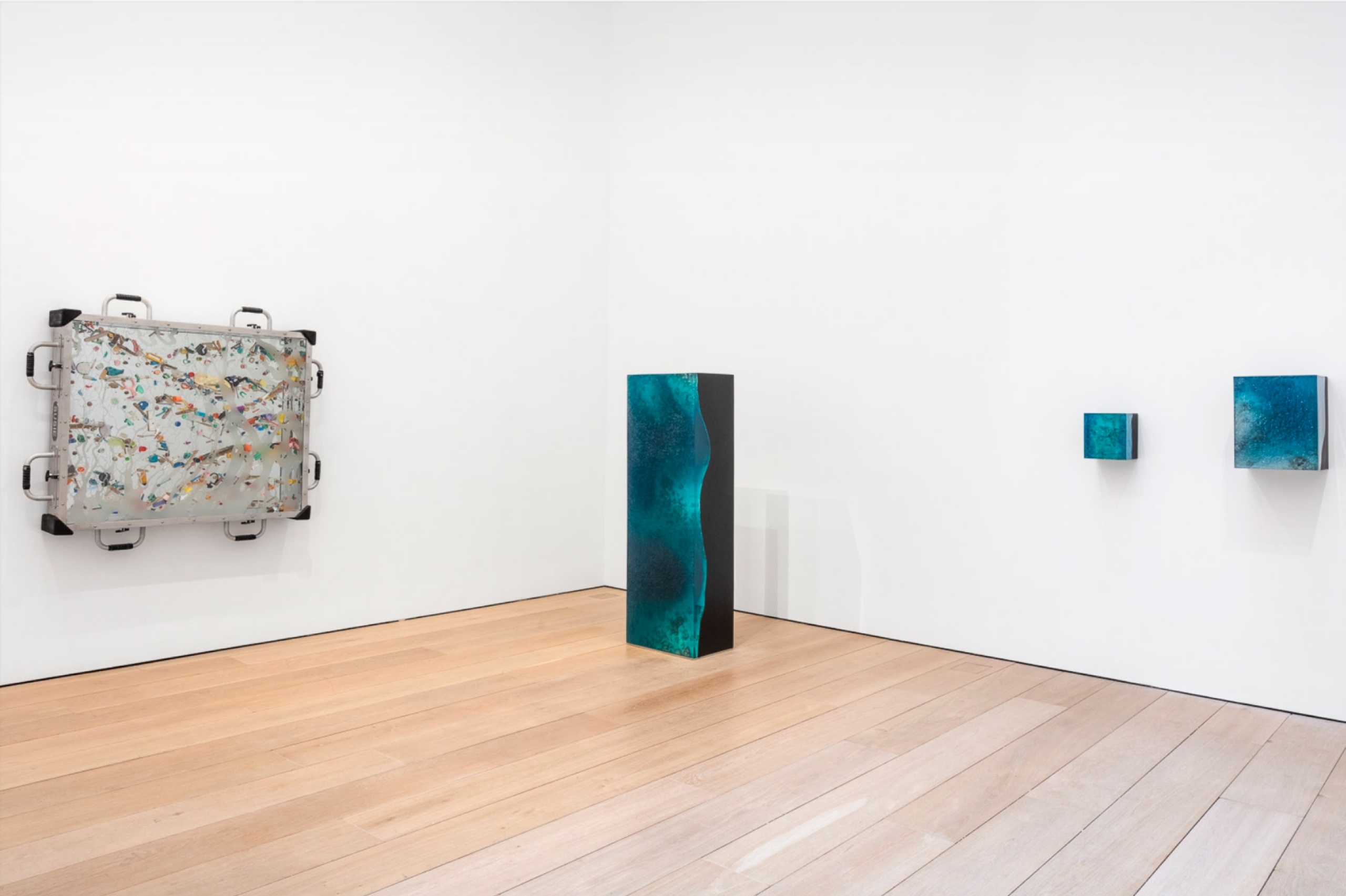 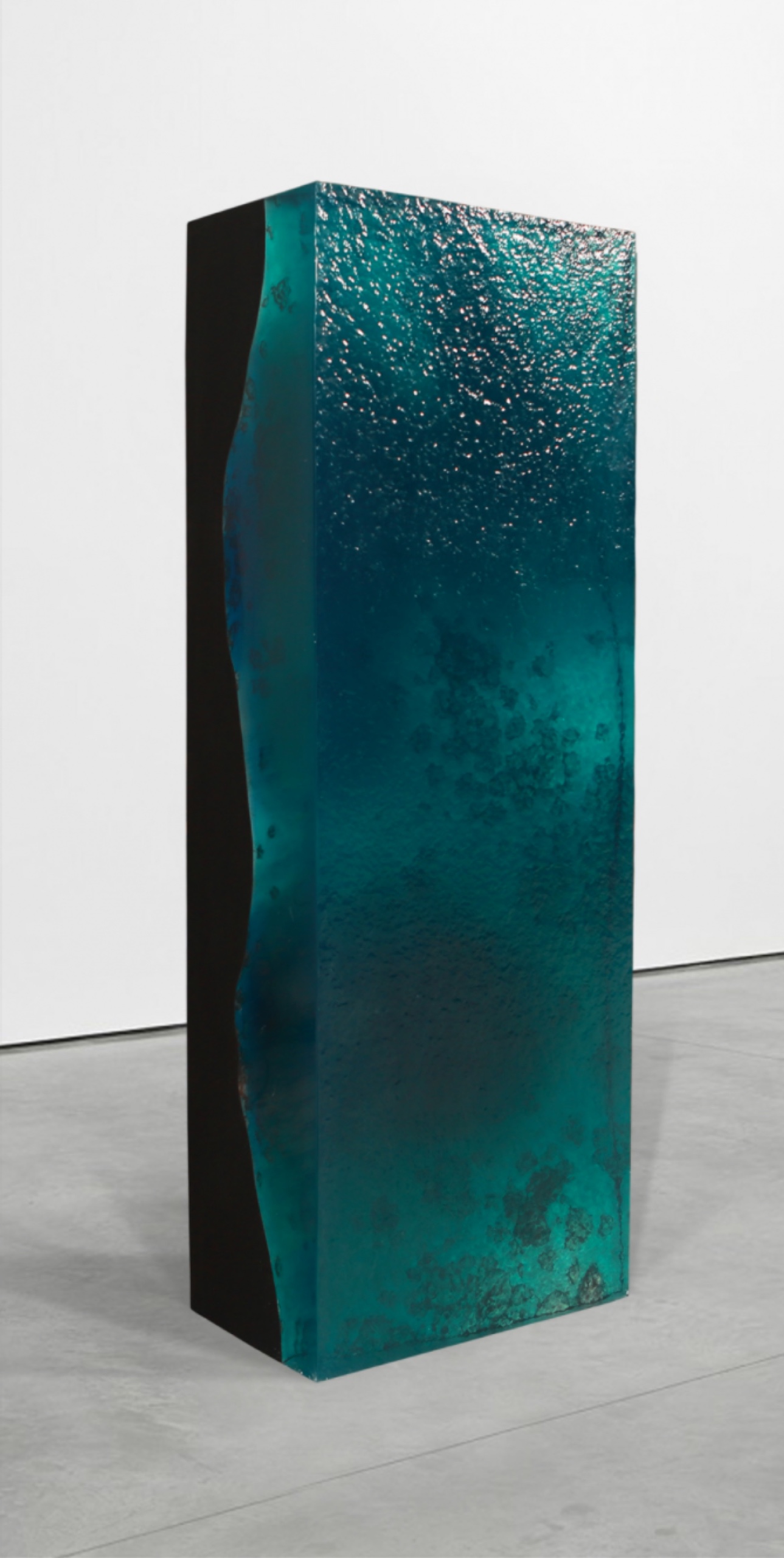 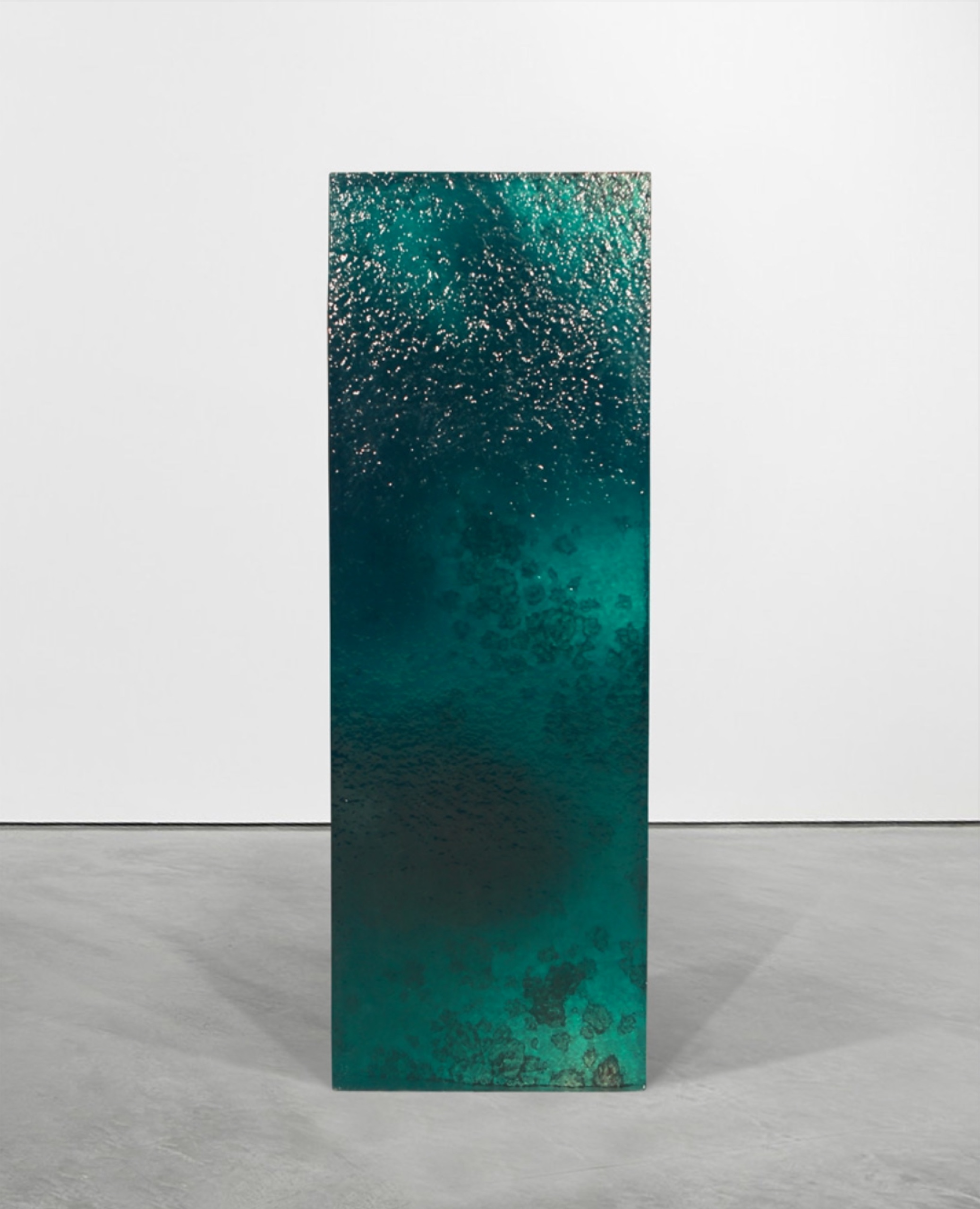 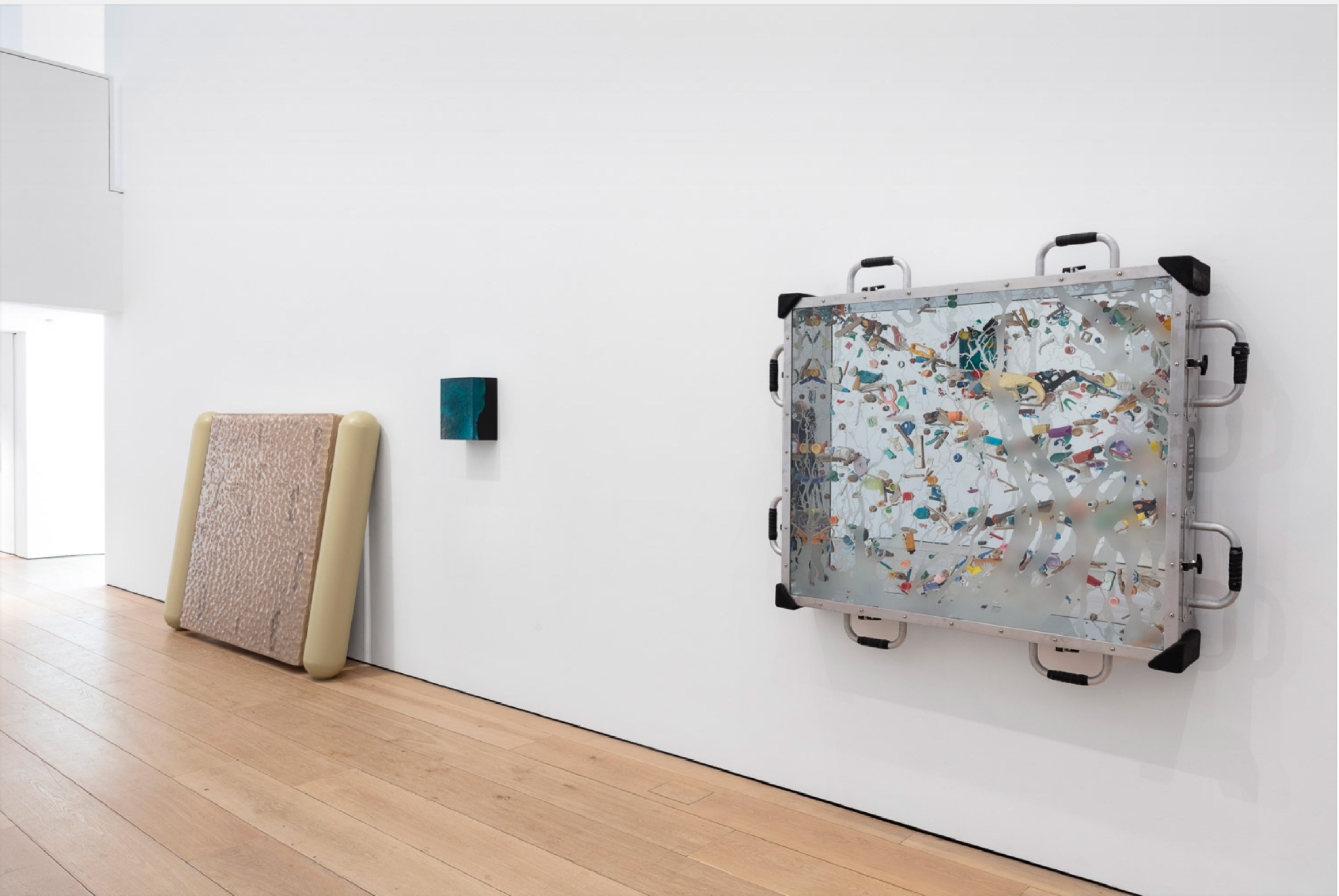 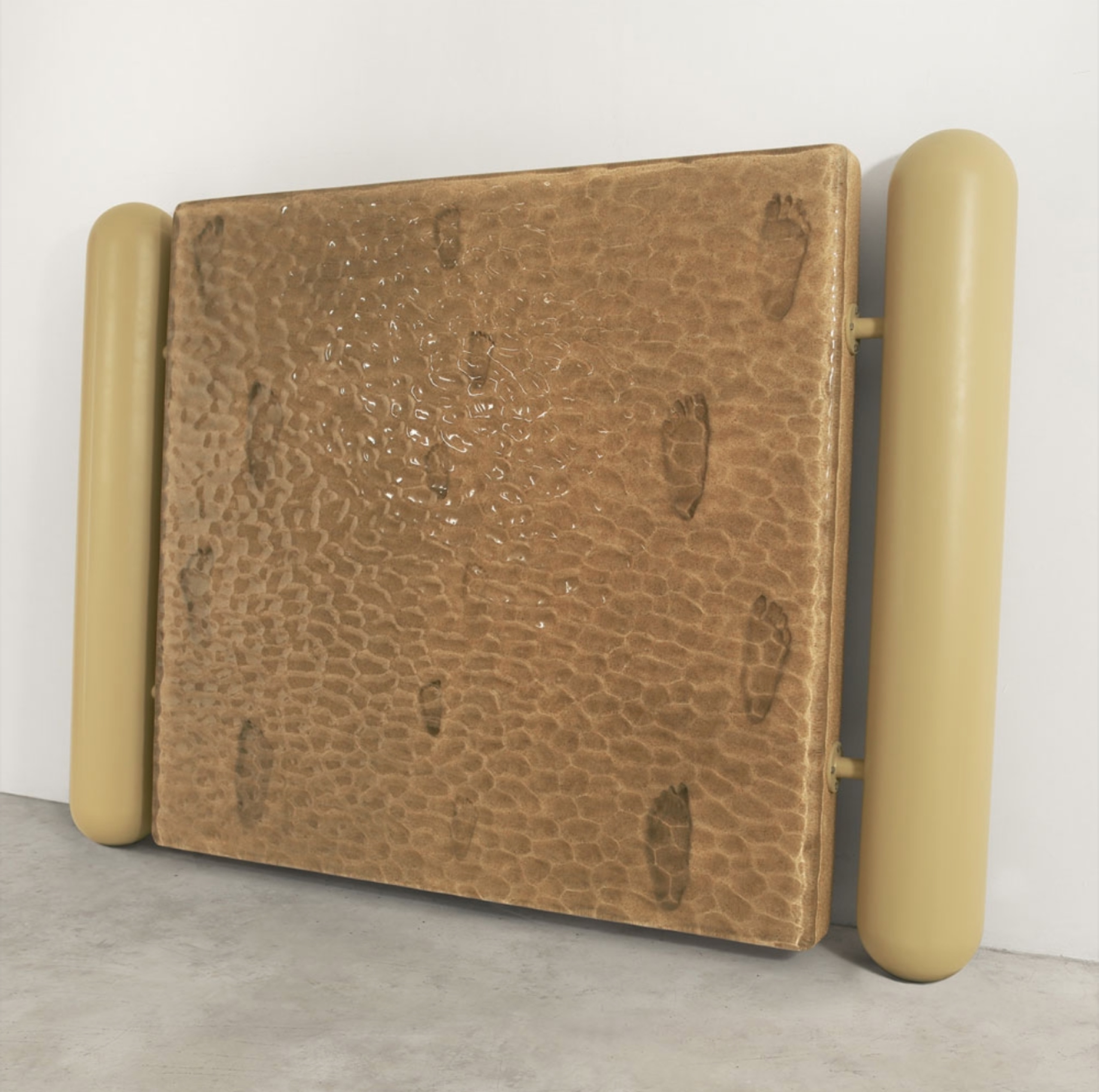 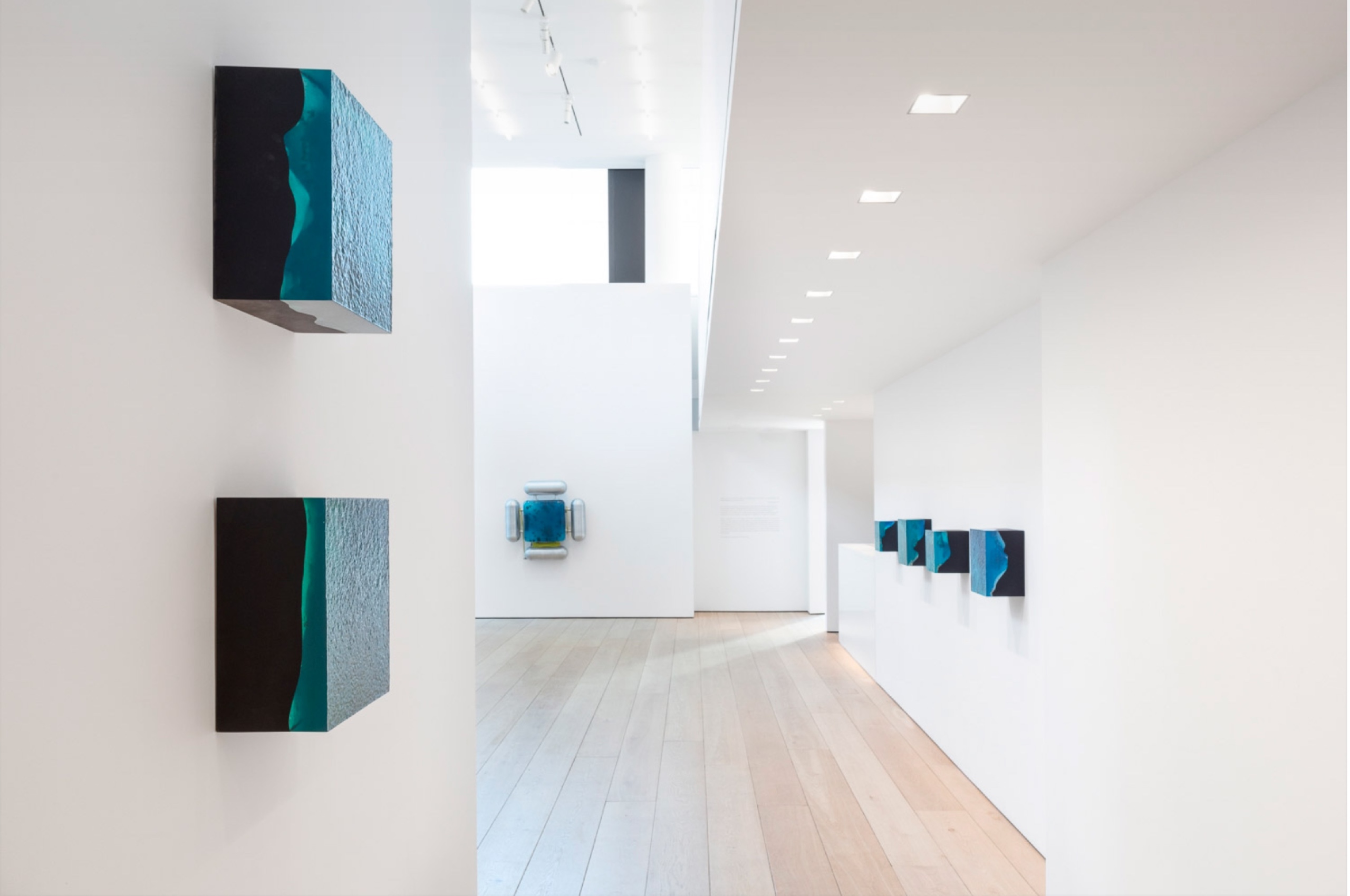 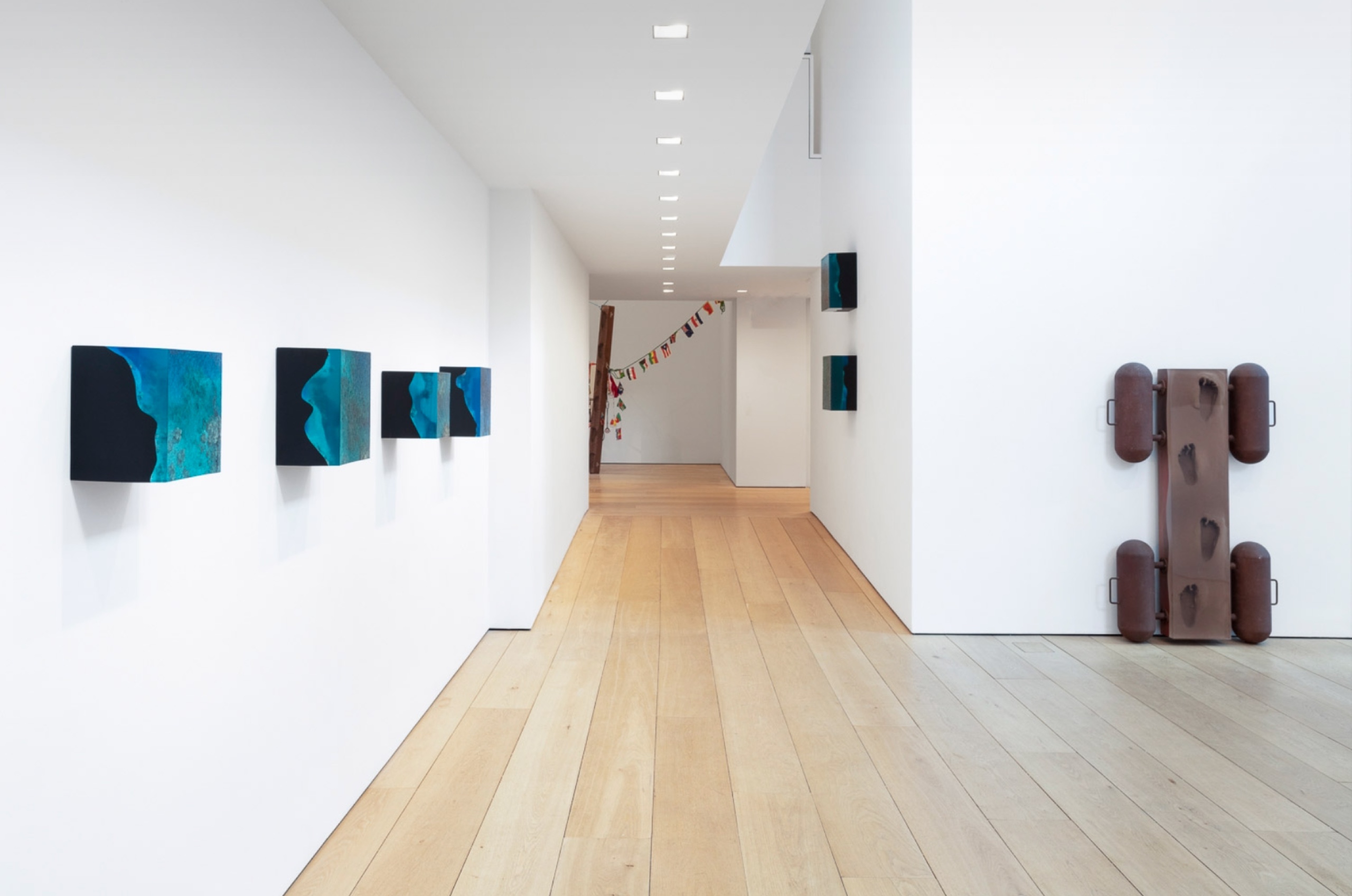 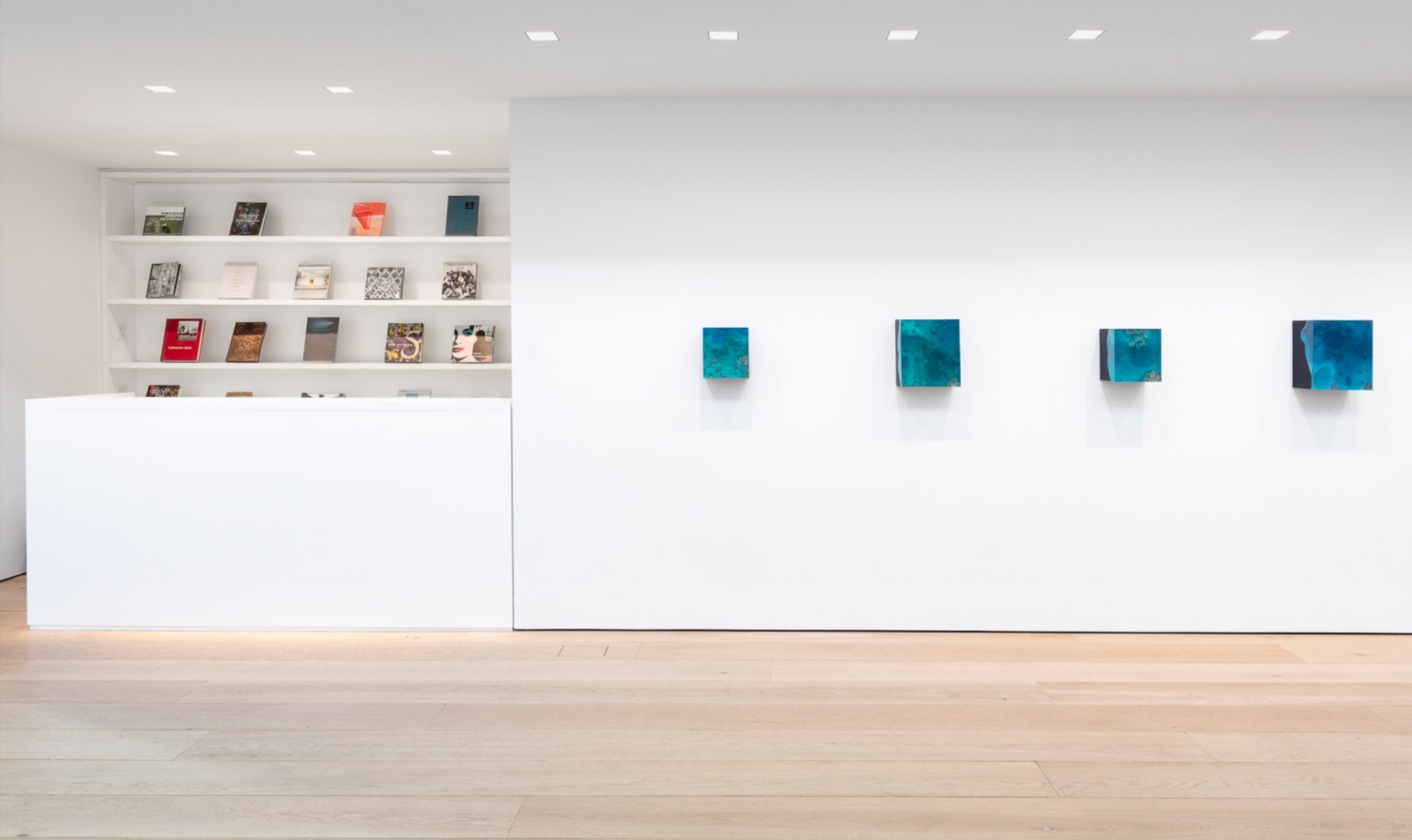 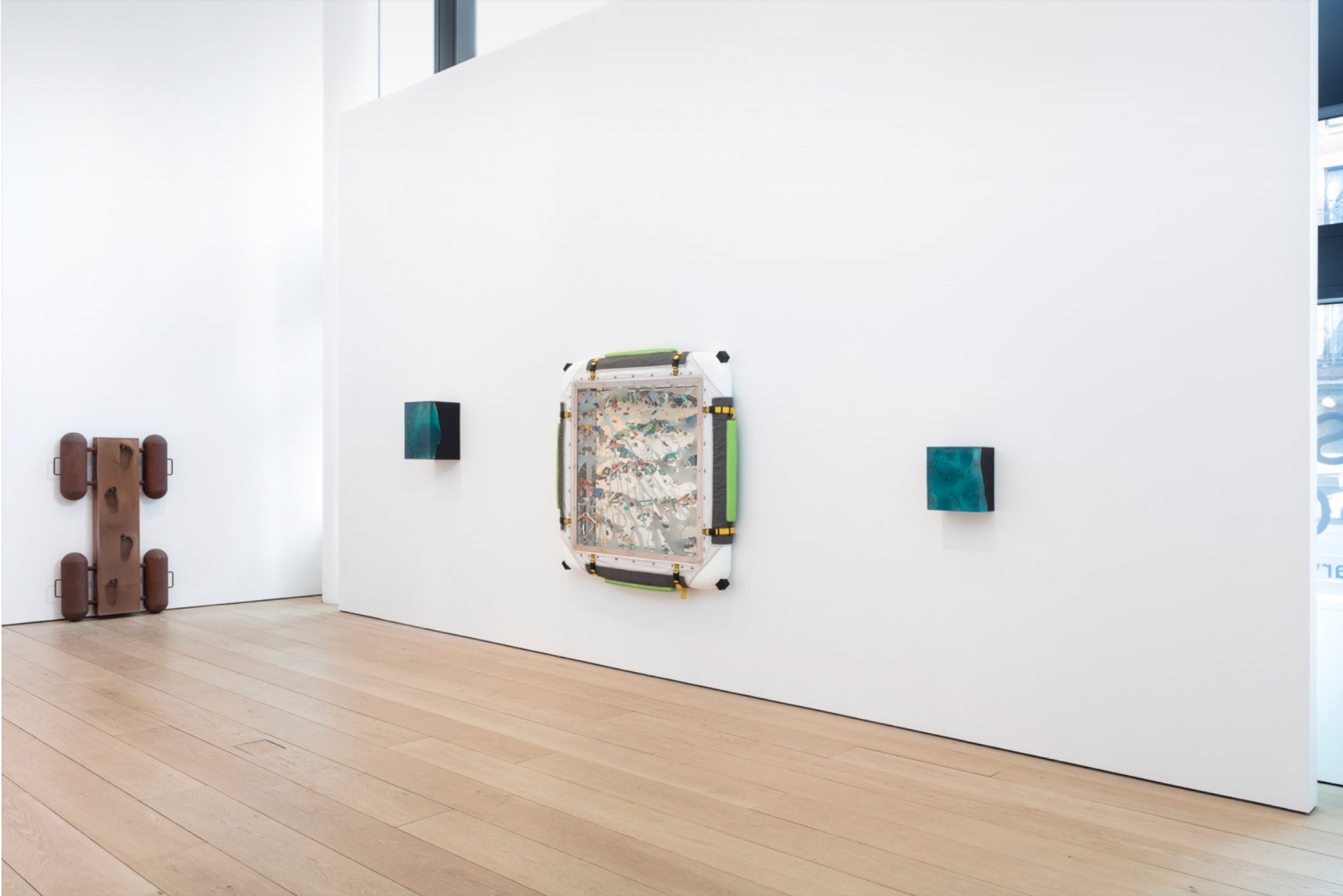 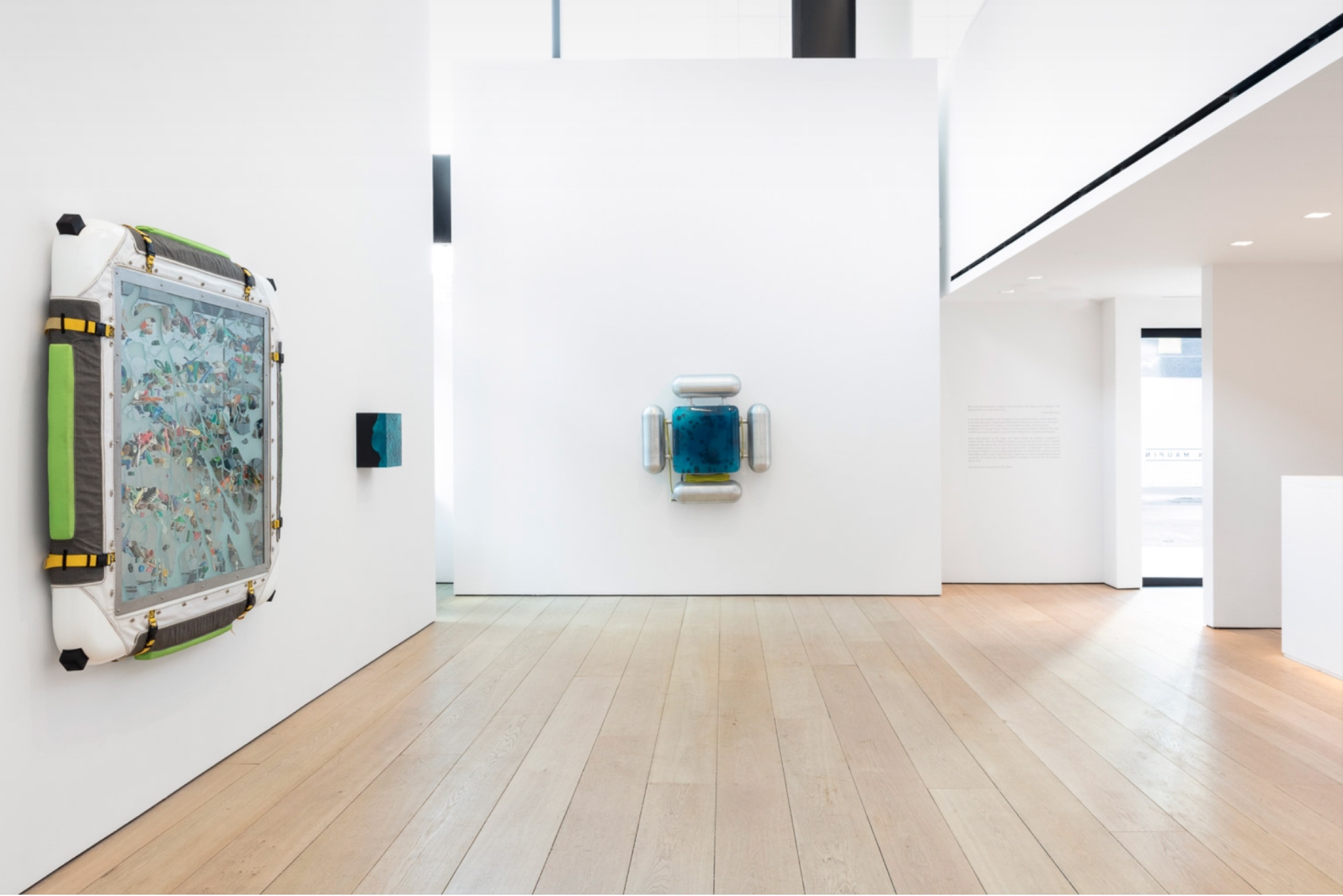 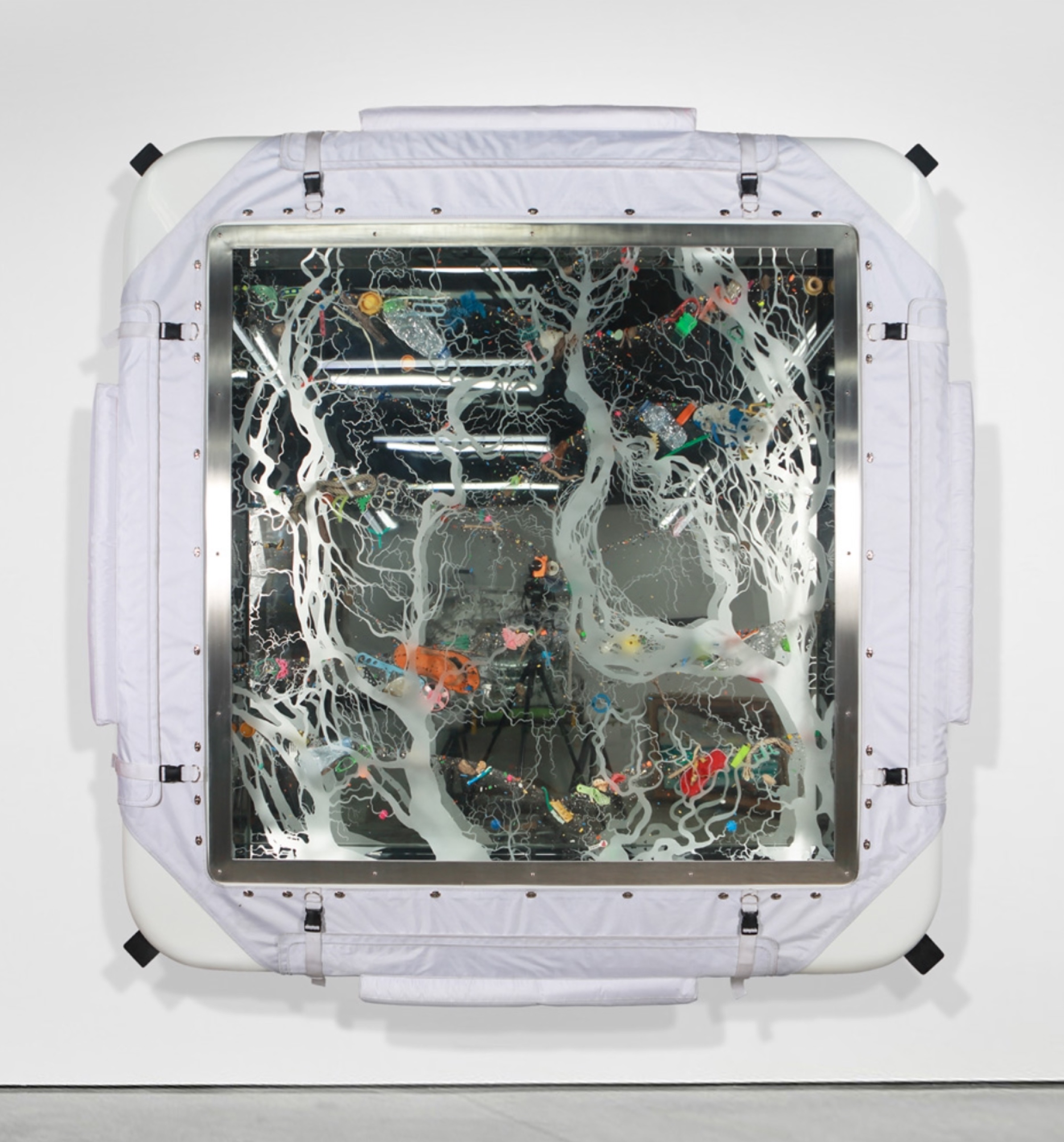 As part of its bold reappraisal of the seascape genre, the exhibition features works from Bickerton’s Ocean Chunk series, which he first conceived of while living in New York City prior to his relocation to the Indonesian island of Bali in 1993. During “one grueling [New York] winter too many,” as he desperately yearned to swim in warm, tropical waters, Bickerton—who spent decades as an avid surfer—imagined these works as sensual material portals to faraway seas, calling them “a contemporary form of idolatry [and] a bulwark against longing.” Made of resin and fiberglass, they appear as solid, three-dimensional chunks of undulating ocean water, extending the artist’s career-spanning interest in the hybridization of mediums—particularly sculpture, painting, and photography—and his efforts to formally overhaul art historical genres such as seascape painting.

In a particularly elaborate, large-scale work from this series, Hanging Ocean Chunk (To Be Dragged Up Cliff Faces, Strung Across Ravines, and Suspended From The Forest Canopy) 1 (2022), a square ocean chunk encased in stainless steel rails is suspended from the gallery ceiling. Festooned with a panoply of accessories including carabiners, flags, coils of rope, and climbing equipment, the work suggests and provides for its own transportation through difficult terrain. Beyond its current gallery setting, Bickerton has prepared for possible future installations of this work on cliff faces, over gorges, and high in forest canopies.

One of the exhibition’s most personal works, Floating Family Footprints (Flow Tide) 1 (2022), documents the trail of footprints left by the artist, his wife, and their child during one of their walks together on the beach. As in the Ocean Chunk series, Bickerton uses resin and fiberglass to create the impression of a surface of shimmering water, beneath which two sets of adult footprints are visible on either side of a smaller, toddler-sized set between them. Like other works in the exhibition, Floating Family Footprints (Flow Tide) 1 features a pair of flotation devices mounted onto the broad slab of preserved beach, indicating its potential use as a raft should the need arise.

Offering another reinterpretation of seascapes, the exhibition also includes three works from Bickerton’s Vector series, which consists of mounted steel boxes containing flotsam and beach detritus that is visible through an etched glass surface. The interiors of these cases are mirrored so that the lines of flotsam appear to float in space and dance around the viewer, implicating their presence within the visual narrative. As they are equipped with stainless steel frames, rubber-grip handles, and fastened straps, the ultimate purpose of these objects remains undetermined, allowing them to appear as transportable survival modules as much as museum display cases.

The meandering vein-like designs etched upon the glass of River Vector: White (2021) and River Vector: Big White (2021) suggest cartographic representations of rivers and their tributaries. These works poetically elaborate upon the roles played by waterways within the human rearrangement of the elements, as detritus flows out of rivers and into the ocean, where it may swirl around for decades before being deposited back onto the shore. Far from being random or haphazard, the meticulous arrangement of the detritus within these box-like structures is based on Bickerton’s close attention to how such items—including discarded bottles and broken plasticware, among other colorful, unidentifiable bits—are distributed by the tide as they wash upon beaches.

Framing these cycles on a planetary scale, the artist takes a contemplative view of such patterns of creation, destruction, movement, and change. “I consider the great gyres of plastic in the Pacific as much a part of the natural order as the migration of wildebeests in the Serengeti,” he has said. “It’s the majesty of molecules—you’ve got great swirling vortexes of molecules as things wash and slush around the planet, and geological time moves on.”

Since his initial rise to prominence during the mid-1980s in New York’s East Village, Bickerton has often been associated with a group of artists called “Neo-Geo”—a designation that has been much contested by those to whom it was applied, especially Bickerton. His best-known works from this period—called “Culturescapes” by the artist—exaggerate commercial forms and the visual language of branding, with their shining aluminum surfaces populated by corporate logos and other symbols. Bickerton’s early commodity-oriented works often take the form of boxes or crates bedecked with straps, industrial-looking installation hardware, and rolled sheets of neoprene. These components are intended to afford equal meaning to each station of the artwork’s existence, whether it is in storage, being transported, or on display. Many of these works also feature a logo for SUSIE, Bickerton’s own self-invented brand, which employs a traditionally female nickname as a surrogate for the artist’s signature—a deliberate choice to avoid the macho, paternalistic legacies of more obvious artistic forebears.

Formally speaking, the new works included in Seascapes at the End of History represent something of a return—albeit one taken, both geographically and artistically, the long way around—to the industrial trappings of Bickerton’s creative output during the 1980s and early 1990s. For example, River Vector: Interior Transport Module 1 (2021) features handles that recall the hardware present in his earlier works, highlighting the variety of art world players which are crucial to the artwork’s lifespan, including those involved in its transportation. Plates bearing the SUSIE logo are also visible on the sides of the work’s metallic frame between these handles, a subtle but significant shift from the dramatically foregrounded, in-your-face presentation of similar logos in previous works. Elsewhere in the exhibition, Floating Ocean Chunk (South Pacific for North Atlantic) 1 (2021) and Mangrove Footprints 1 (2021) include bulbous flotation devices similar to those in Bickerton’s Seascape: Floating Costume to Drift for Eternity II (Cowboy Suit) (1992).

Alongside this resurgence of certain elements, however, there are also notable revisions to the ways in which the artist utilizes them. Instead of imparting a Warholian sense of irony, the works in Bickerton’s Ocean Chunk and Vector series indicate his resistance to the common facile dichotomy between nature and technology, implying simultaneously the commodification of natural resources and the likelihood that activity on our planet will continue beyond human existence. Sidestepping a didactic reading of these works as environmentalist calls-to-action, Bickerton has said, “Environmentalism labors under the presumption that we’re saving the planet for human habitation. We’re just one infinitesimal chapter in the enormity of the history of the biosphere; the planet will eat us up and spit us out.”

Appearing alternately as fabricated artifacts and tools for surviving a post-apocalyptic future, the works in Seascapes at the End of History convey Bickerton’s stark and darkly poetic worldview, once described by critic Holland Cotter as “an end-of-the-world view, beyond solution, beyond revulsion, blissed-out on the terrible wonder of it all.” Refusing indulgent self-pity for his species as well as the finger-wagging moralism of activist art, Bickerton has instead doubled down on his commitments to reinventing modes of representation and expression, creating innovative seascapes for our calamitous present and beyond.